Indianapolis made national news last week with the announcement that by 2014 the city will have the largest electric car-sharing system in the country. The Bollore Group, a French company, plans to replicate their Paris car-sharing program by investing $35 million into 500 cars and 1200 charging stations in Indianapolis. 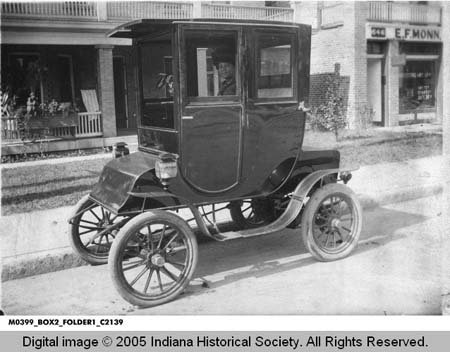 The phrase “everything old is new again” came to mind as I remembered the charming circa 1915 photograph of African-American millionaire Madam C. J. Walker driving her Pope Waverley electric car on the streets of Indianapolis. As early as 1896 the Indiana Bicycle Company on S. East Street began making the carriage-looking electric cars and had a run of about 20 years before shutting down in 1916. Much has been written on HistoricIndianapolis.com about the Waverley Company, makers of carriages, bicycles, and electric cars, so revisit Dennis Horvath’s more complete article titled A Day with a Silent Waverley. 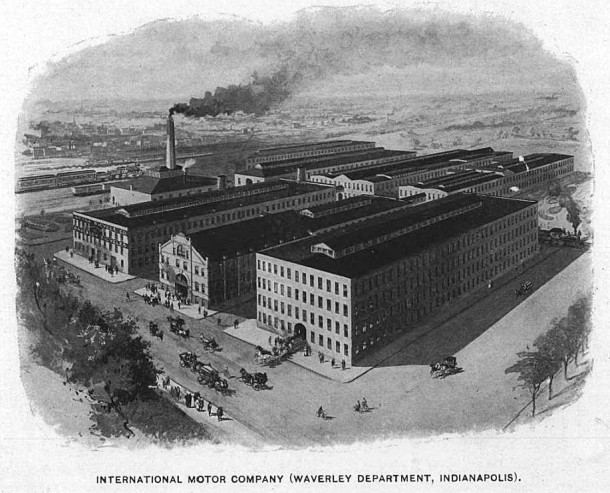 The Waverley electric car was first designed and built in 1896 at the S. East Street factory of the Indiana Bicycle Company, makers of the Waverley bicycle. The building to the left in this 1902 drawing shows the bicycle building. Known by this time as the International Motor Company, this idealized drawing may be a conceptual plan as the large, four-story building to the right never appears on local fire insurance maps. Artists quite often removed adjacent structures and utility lines, enlarged the size the of buildings, and drew the people and horse-drawn vehicles extra small to exaggerate the grand scale of the featured businesses (who after all were paying customers in these early city booster booklets). 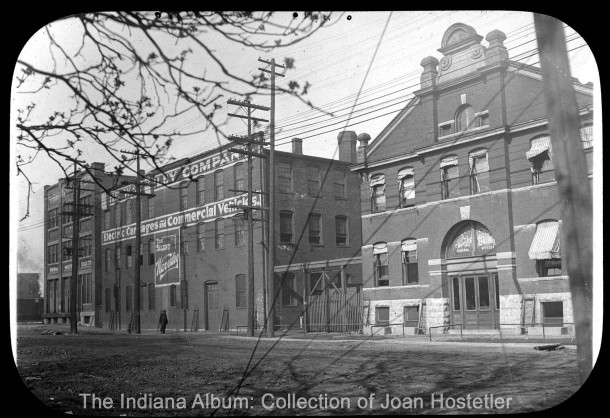 Lantern slide circa 1910. Courtesy of The Indiana Album: Collection of Joan Hostetler

This circa 1910 glass lantern slide shows the Waverley Company, acquired by the Pope Motor Car Company of Hartford, Connecticut in 1899. Although the company continued to produce electric cars, the Pope Company had financial problems and, after considering the demolition of the plant, opted to sell the Indianapolis branch to a group of local business men in 1908. The three-story brick building to the left is painted “Regal Motor Car Company” and apparently was a branch of a Detroit company. Although a January 1914 issue of Automobile Topics states that the Waverley Company was the second oldest manufacturer of electric vehicles and praised the company’s high standards of workmanship and materials, within two years production of Waverley electric cars came to a halt. 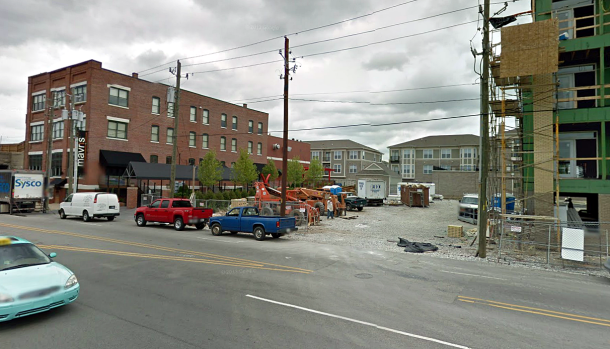 Although the Waverley buildings have long been demolished, the company lives on in name in the new Waverley Loft apartments (seen in the background and under construction to the right). Check out their great view of the city. The one- and two-bedroom flats share a fitness room, outdoor pool, and business center. The old warehouse to the left remains and received a complete renovation since 1999 (a slight “Regal Motor Car” ghost sign still remains on the facade) . Later the site of a grocery distribution center and a plumbing warehouse, the building now is an event center named the Mavris. Parties, wedding receptions, and corporate events take place in the large hall with exposed brick walls and refinished pine floors. And very soon I imagine we will see residents and guests in electric cars zipping down East Street, unaware of the importance of this site’s history involving early electric vehicles.