Among the thousands of businesses to call Indianapolis home was the upholstery shop of L. G. Twente located at what was then 8 Central Avenue (today 1010 Central Avenue in the historic St. Joseph Neighborhood).

Louis G. Twente (probably pronounced Twenty based on the number of times city directories and census takers misspelled the name) stuck close to the Fort Wayne Avenue and Central Avenue area as he operated upholstery, furniture repair, and antique furniture stores between the early 1880s and his death in 1909. The second-generation American was born in Louisville in 1854 to Jacob and Louisa Twente (born in Prussia and Switzerland). The family settled in Jeffersonville for a while before a few of their sons moved north to the growing capital city. Twente, newly married to Christina Roth in 1878, worked as a laborer for a few years before operating a wood and coal company at 100 Fort Wayne Avenue (old address) in 1883 and 1884. In a later newspaper article he stated that he began in the furniture business in 1882, but directories first list him as an upholsterer in 1885.

This undated photograph from the Indiana State Library is typical for the era with the business proprietor (likely the man next to the horse), his employees, and family posed in front of the business (and also their home to the right). Based on directories, the upholstery shop was only located at 8 Central Avenue from about 1890 through 1893. The Twentes had four children, including daughters Emma E. (b. 1881), Anna Marie (b. 1883), probably the two little girls seated with their mother behind them; son Louis Fredrick (b. 1887), probably the toddler seated on the platform rocker in the doorway; and son Robert A. (b. 1895 after the photograph was taken). The older boy in the wagon and other two employees are unidentified. 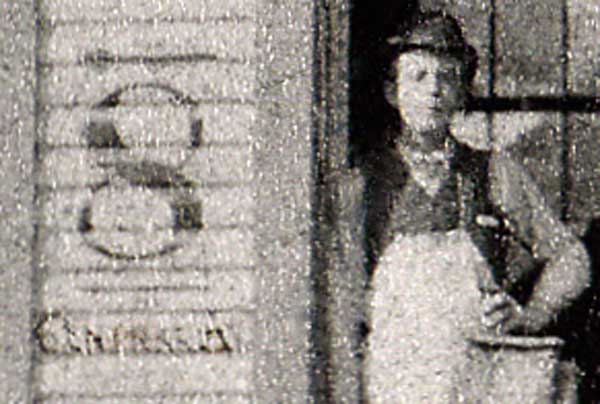 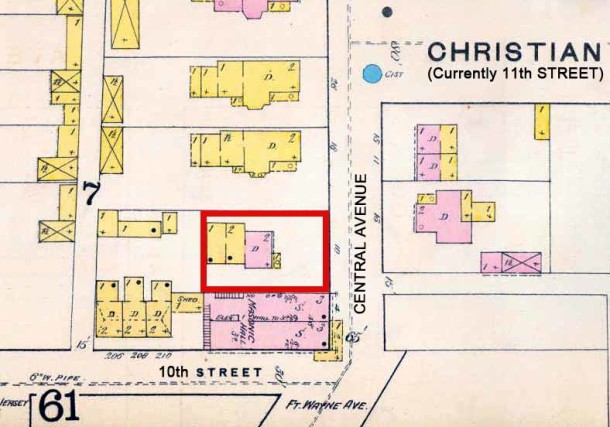 The absence of the wood frame upholstery shop in the 1887 Sanborn Fire Insurance Map indicates that the structure was built between 1887 and about 1889 or 1890. The Twente family lived in the two-story brick and frame house toward the back of the lot. Note that the shop was built adjacent to a three-story brick structure to the left (south), identified on the map as stores with a Masonic Hall on the third floor. Part of this building was occupied by Lewis Meier and Company clothing manufacturers, and eventually expanded to occupy all three floors. 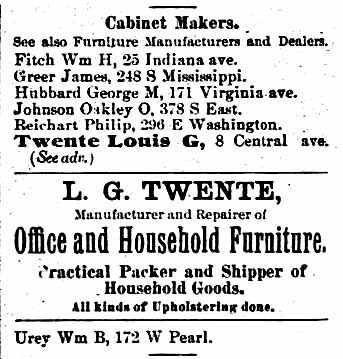 Twente believed in promoting his business and often purchased advertisements in city directories. He not only offered upholstering, but also packed and shipped goods, manufactured furniture and mattresses, and repaired furniture. Earlier ads mentioned that he sold goods to the trade including burlap hair and excelsior (wood wool used as furniture stuffing). Toward the end of his career his focus shifted from upholstery to antique furniture sales. In an article titled “Old Curiosity Shop in Fort Wayne Ave.,” the Indianapolis News stated that Twente was “one of the few men in the West who handles antiques exclusively” (October 3, 1902). The article frustratingly reveals little about the shop owner, but describes a packed storeroom at 904 Fort Wayne Avenue full of grandfather clocks, tables with secret drawers, a marble pedestal that Governor Albert Porter brought from Italy, and an old-fashioned mahogany bookcase believed to have once been owned by Governor Morton. Twente died in his mid-fifties on July 17, 1909 and was buried in Crown Hill Cemetery. Administrators held a sale of his antique furniture later that year. 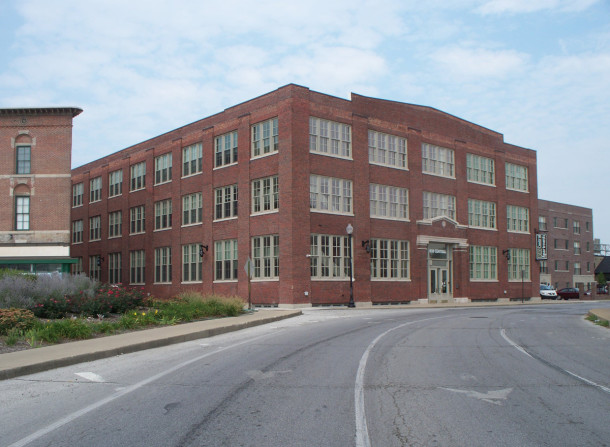 By 1909 the old Twente upholstering shop, house, and the three-story brick Masonic Hall had been demolished to make way for Lewis Meier and Company’s new clothing and overall factory, manufacturers of the Auto Brand line of work and sports clothing. A modern factory with proper ventilation, multiple windows, staff lunch rooms, and a hall available for employee events and dances, was designed by architects Vonnegut and Bohn. The progressive business, operated primarily by the Meier, Buschmann, and Severin families, operated until about 1957. The building later housed a Haag Drug Company warehouse (1965-1980) and Central Restaurant Supply (1980-2005). Today the building, along with an adjacent structure houses 86 apartments known as 1010 Central. Read Sharon Butsch Freeland’s HI Mailbag article to learn more about Lewis Meier and Company.