It just isn’t Christmas in Indianapolis without Santa Colossal, so we’re repeating the story about the five-story foam Santa who ended up as insulation.

At Christmastime in 1949, a large and unusual singing Santa Claus made a short appearance in Union Station, the city’s 1888 Romanesque revival train station. The Chamber of Commerce organized the Indianapolis Industrial Exposition to promote local industries and scheduled the show during the holidays when thousands of visitors traveled through the bustling station. Committee members felt that the exposition needed a drawing card to play up the holidays, thus the concept of “Santa Colossal” was born.

Walter Dean Dowell, artist for the Chamber, was charged with bringing Santa to life. He convinced Dow Chemical Company to donate huge quantities of Styrofoam, their new insulating product, and work began in a converted Michigan State Highway Garage in Beaverton, Michigan. Over 100 workers helped cut and carve the white foam. Since Styrofoam is soundproof, the men wore red so they could be located in the event of an avalanche. The giant was brought to the city in 8’ x 14” sections filling four railroad boxcars. When reassembled, Santa stood 54 feet tall, sported 10 foot tall boots, a 57 foot diameter belly, and a mustache measuring 12 feet long from curl to curl. Not only did he look impressive, a sound system enabled him to tell the story of his construction and play Christmas music sung by Spike Jones, Perry Como, Sammy Kaye, and other popular singers of the era.

Efforts to find a permanent home for Santa failed – even Santa Claus Land in Southern Indiana could not find a use for him – so in early January 1950 he was chopped up to become insulation. Today he lives on only in the memories of a few people and in the souvenir postcards that were distributed by the tens of thousands during the exposition. 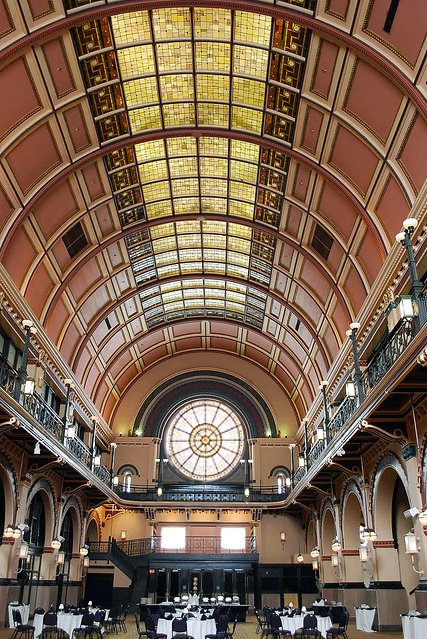 Luckily, Union Station’s head house (now known as the grand hall) survives today. With reduced rail travel, Union Station sat abandoned and was threatened with demolition in the early 1970s until brought back to life in the 1980s. More than $30 million was spent on the restoration and the landmark reopened in 1986 as a “festival marketplace” with novelty stores, boutiques, and restaurants. The concept eventually fizzled, and by 1999 the city leased the space to Crowne Plaza for a conference center and banquet hall. Today the space is used regularly for weddings, conferences, political events, and was even converted into a posh ski-lodge themed hospitality lounge for VIPs and athletes during the 2011 Super Bowl.