Just one-and-a-half miles southeast of the Circle on one of our city’s original diagonal streets, Fountain Square is thriving today with unique restaurants, galleries, night clubs, and not just one, but two duck pin bowling alleys.

This 1950s view looks northwest from Prospect Street along the Virginia Avenue commercial corridor. The negative was taken from the vantage point of the fountain that gives the neighborhood its name. Businesses lining the street include Schiff’s Shoes, Merchants National Bank (building constructed in 1922 and designed by architects Vonnegut, Bohn, and Mueller), G. C. Murphy Co. Five and Dime, Gus Kasper Furniture and Appliances, and Wade’s Drug Store. 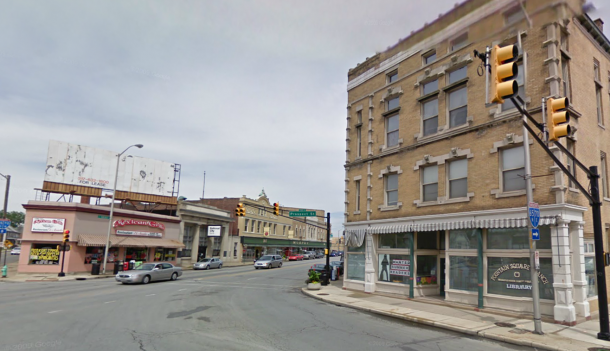 As a preservationist, I’m always happy when the “now” photograph nearly matches the “then.” This 2009 view reveals that the buildings remain mostly unchanged. Occupants today include the Mexican Grill, PNC Bank (still National City in 2009), and the Murphy Building houses galleries, artist studios, and restaurants. The Fountain Block Building on the right was constructed in 1902 with stores on the first floor, offices and apartments above, and a grand hall on the upper floor. In 1994 the Fountain Block was rehabbed to its current configuration and today houses the Fountain Square Branch of the Indianapolis Public Library and Fountain View Senior Apartments.