This clear view of Indianapolis, taken circa 1907 according to the the Library of Congress, shows West Market Street looking east toward the Soldiers and Sailors Monument. Many modes of transportation were available in the early decades of the 20th century and several are seen here, including horse-drawn wagons, early automobiles, and trolleys. In the foreground, multiple trolley and interurban tracks are embedded in the brick street, with many lines leading into the Traction Terminal train shed on the left. The shed, along with the adjacent nine-story Traction Terminal Building designed by Daniel Burnham, was at the center of Indiana’s busy interurban network until 1941. Note the stone eagle near the roof of the shed. This is one of a pair that was salvaged and removed to the Indianapolis City Hall. Sadly, one of the eagles was damaged by a crane in January 2012. Other prominent buildings visible on the Circle are the English Hotel and Opera House on the left and the Franklin Building on the right. 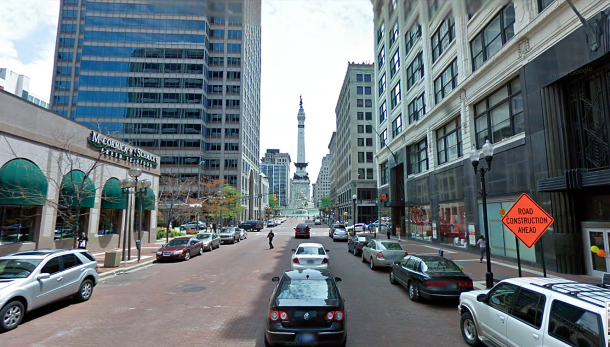 Other than the monument, early residents of Indianapolis would not recognize the view today. The row of brick Italianate structures on the right were replaced with the William H. Block department store, built in 1911 with a 1934 expansion. The Block family made a smart choice when building across from Traction Terminal since theirs was the first store that many interurban riders visited after leaving the train shed. The Blocks downtown store closed in 1993 and in 2003 the space was converted into luxury apartments known as the Block Apartments. The terminal shed was dismantled in 1968 and the Traction Terminal Building razed in 1972. Today the Hilton Indianapolis and McCormick & Schmick’s Seafood & Steaks occupy the old Traction Terminal site.