A good day for me is finding a new, old photograph of Indianapolis that sheds light on our city’s history. Sadly, a last-minute sniper outbid me on this photograph that appeared on eBay last year, but the dealer was kind enough to email his digital files of this not-often photographed intersection in Indianapolis. Although the location and date were not noted, the photograph contains many clues. 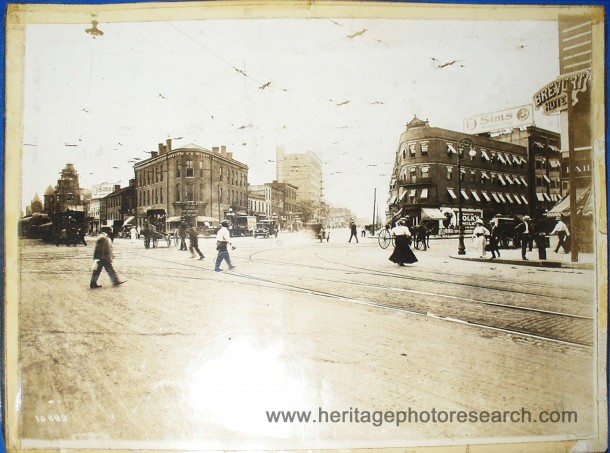 The angling street and Brevort Hotel sign are dead giveaways that this view looks northwest up Indiana Avenue. West Ohio Street is in the foreground, with the trolley tracks curving north to go up North Illinois Street. The photograph does not include the name of a photographer and the negative number “10889” does not have the distinctive Bass Photo Company “-F” at the end of the number. That’s too bad, because if Bass Photo, the city’s oldest photo studio, had made the image, I could find a date based on their numbering system. By zooming in a little closer, however, there are several other hints that narrow down the date to a six-year period. 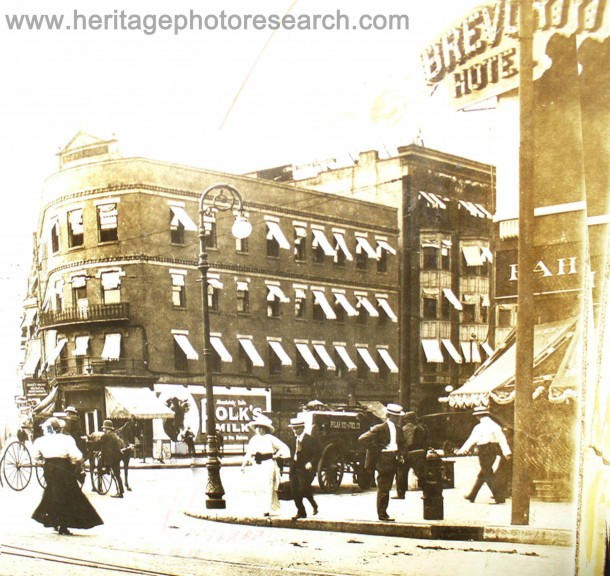 If a license plate isn’t visible, I always start with women’s clothing. These ladies show a little ankle, indicating that this might be the mid-1910s. The lady in white also wears a large “Merry Widow” style hat, popularized by a 1907 operetta, and worn until the eve of World War I. The Shiel Apartments (also called the Shiel Block, to the left) and the Brevort Hotel stood for several decades and did not help with dating, but the Polk’s Milk billboard helps a little. Years ago I interviewed the grandson of owner Samuel O. Dungan. He recalled that Samuel was a marketing genius, designing a unique milk bottle building in 1910 and creating the slogan “Polk’s Milk: Always Ahead,” which he paired with a large graphic of a cow’s head. Based on advertisements in the Indianapolis Star, it appears that the company started using this phrase in late 1914 or 1915. [Cool factoid: Who knew that pop artist Andy Warhol created a silkscreen on cardboard in 1968 titled Polk’s Milk Always Ahead?] 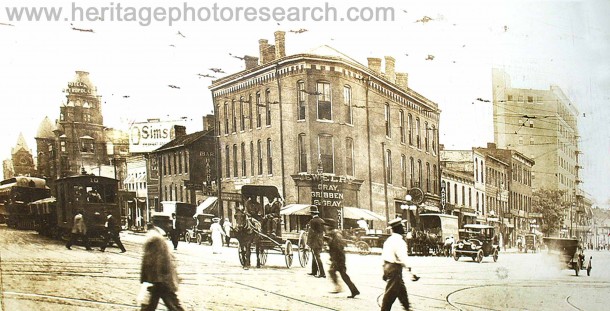 High-rise buildings, such as the eight-story Plaza Hotel to the right, were new to the city in the ‘teens, and sources indicate that the Plaza Hotel was completed in 1914. The jewelers Gray, Gribben, and Gray operated in Indianapolis as early as 1884 and were long established in a flatiron building known as the Tomlinson Block at this corner (200 Indiana Avenue).

The Keystone Magazine of Optometry, April 1910, states that Gray, Gribben, and Gray was located in new quarters at Indiana Avenue. The January 1923 issue of The Jewelers’ Circular, reports:

March 1 will see one of the jewelry landmarks of Indianapolis pass. The Gray, Gribben & Gray Co., which for years has occupied the corner at Ohio St. and Indiana Ave., and is one of the oldest retail stores in the city, will move to a location on N. Illinois St., a little south of the old location. To the habitues of the “old levy” district of the city, the corner occupied so long by the jewelry store will seem mightily vacant when a new business moves in. It will be like wakening some morning and finding some one has moved the monument.
Assuming that they removed their signs immediately, that gives us a “no later than” date of March 1923. One last clue is the funky-looking hotel on Ohio Street to the left. The rooftop sign reads “Hotel Metropole.” After a short life in the 1890s as the National Surgical Institute, the building housed hotels with various names. From about 1913 through 1920, the building was known as the Hotel Metropole. So I can safely say that this photograph was made between 1914 and 1920, but based on the length of the lady’s skirts I would estimate the image to be from about 1915 to 1917.
For other views of this building, which stood until at least 1978, check out:
1913 – William H. Bass Company Collection at the Indiana Historical Society
1939 – Joseph’s Jewelry and Loan Company, Indianapolis Star photo 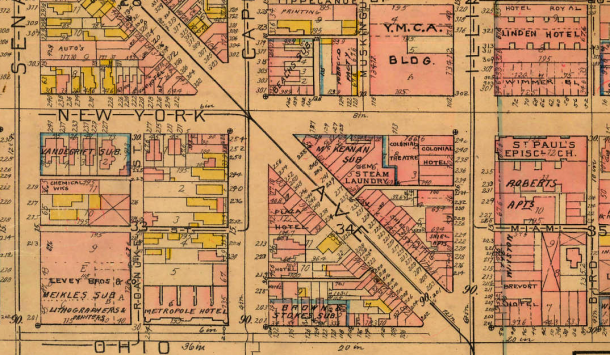 Until about 1980 Indiana Avenue terminated at Ohio Street, as originally planned by city designer Alexander Ralston in 1821.

With the construction of the AUL (American United Life) Building in 1982, Indiana Avenue was shortened by one block. This 38-story limestone skyscraper, now named OneAmerica Tower, was the tallest building in the state when constructed in 1982. It lost that distinction when the Chase Tower was completed in 1990, but remains the second-tallest building in Indiana. The OneAmerica Tower is the only downtown office building with its own zip code (46282).

OK, you history buffs…what other dating clues do you see in this photograph? Do you have great photos like this in your collection?