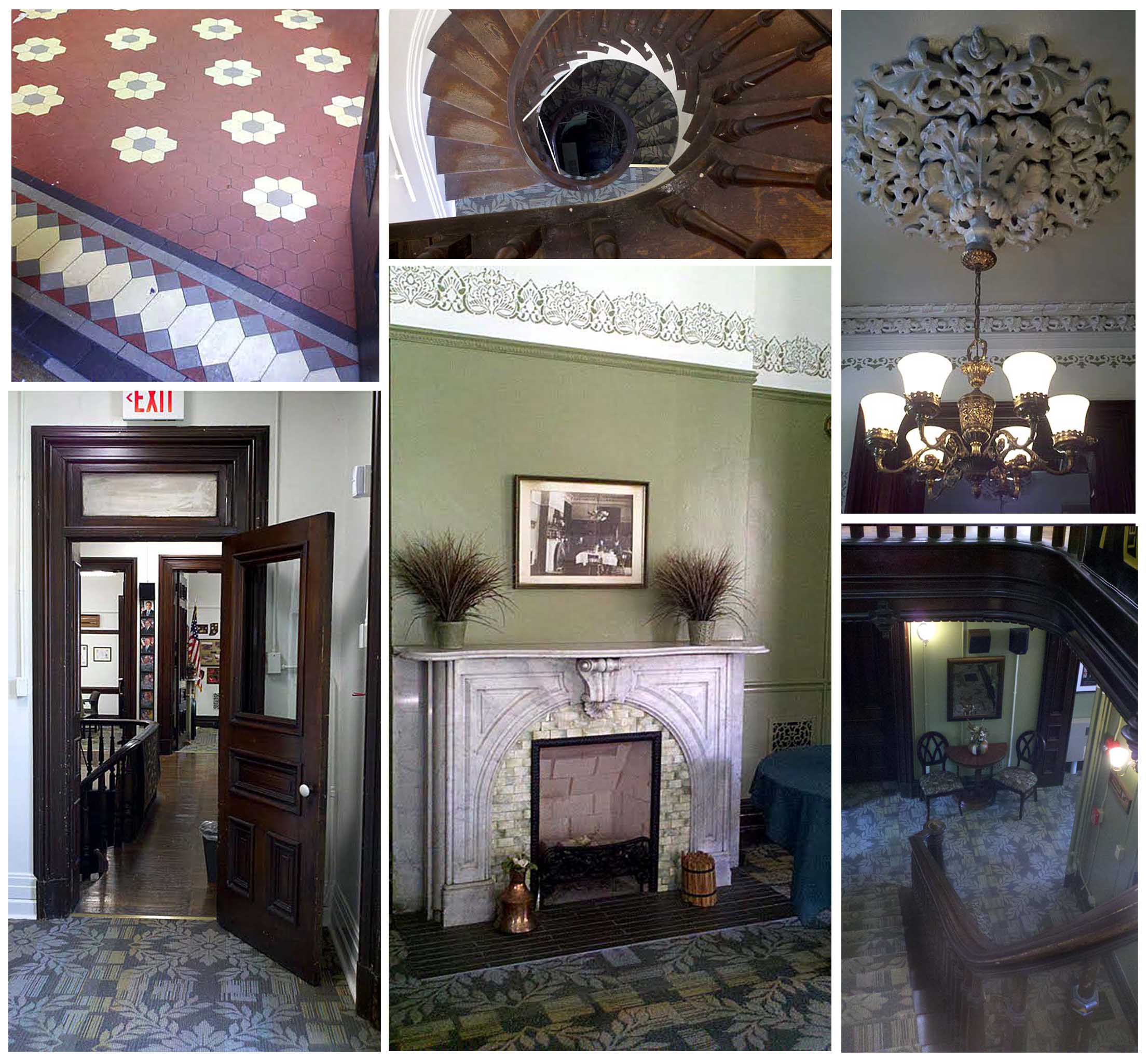 One of the city’s little-known gems is the Colonel’s Cupboard, tucked away on the grounds of Arsenal Technical High School. The restaurant, operated by high school students, is located in a brick Italianate house completed in 1870. For over thirty years it was home to the highest ranking officers at the United States Arsenal, located on the near east side near Woodruff Place. The Arsenal was built during the Civil War and remained active until after the Spanish-American War when it was no longer needed for military purposes. The government sold the seventy-six acre grounds and buildings to the Winona Technical Institute in 1903 for a technical training school, but the school went into receivership by 1909. Residents loved the park-like setting and considered many uses for the site, until movers-and-shakers realized the need for another high school. Despite legal issues with the property, Arsenal Technical High School opened on September 12, 1912…100 years ago yesterday. 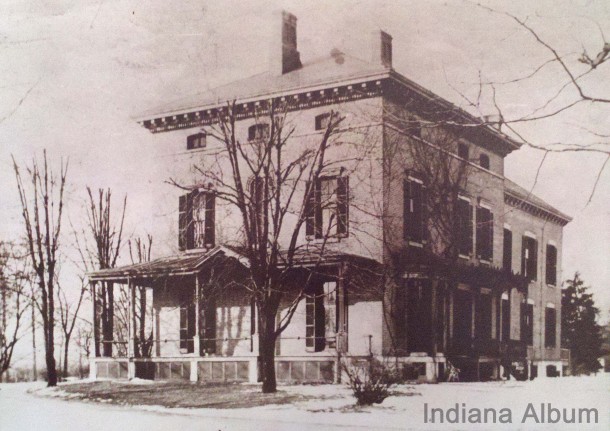 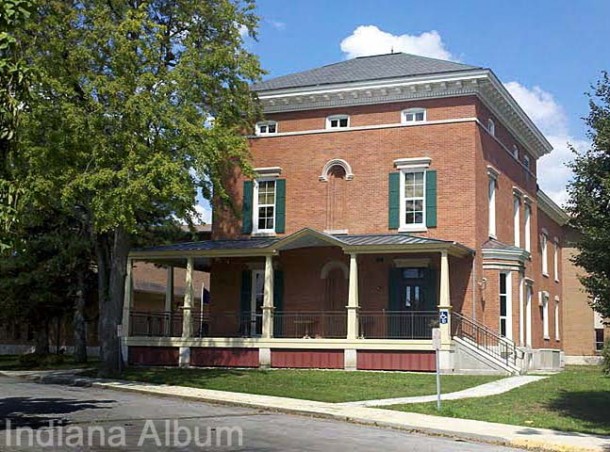 The house was one of two nearly identical houses flanking the Arsenal Building, thus named West Residence and East Residence. Each served as home for the fifteen different commanders who oversaw the Arsenal throughout its history, along with their families and visitors. A history of the Arsenal states that one distinguished guest in the West Residence was George Armstrong Custer, who famously met his demise at the Battle of the Little Big Horn in 1876. The East Residence was demolished in 1928 to make way for additions to Treadwell Hall. 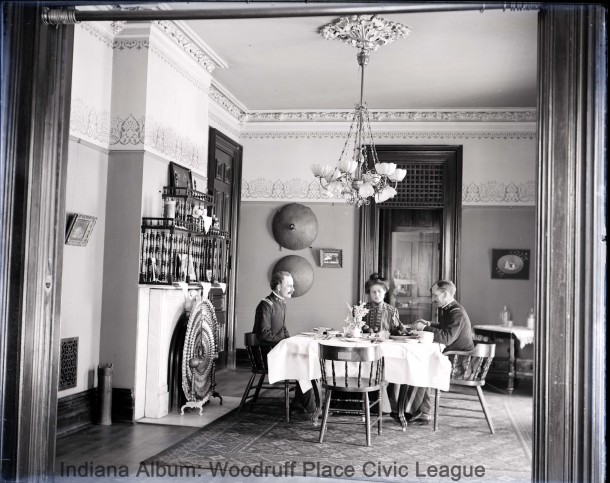 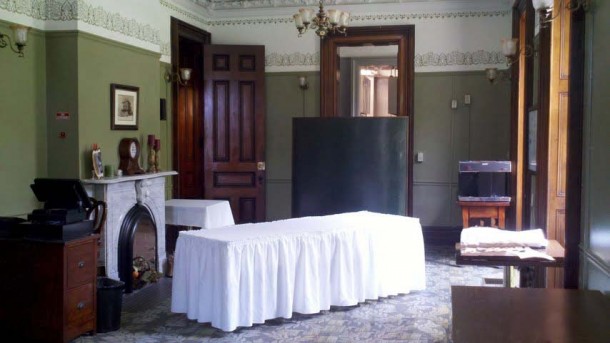 The circa 1900 historic interior photograph is one of many glass negatives of the Arsenal and adjacent neighborhood owned by the Woodruff Place Civic League. We are currently scanning and preserving the glass plates, so expect to see more of these detailed images. The photographer is unknown, but I suspect that the fourth place setting on the dinner table was for the camera man. Through the years the house served many purposes such as offices for school adminstration, teachers, and the school newspaper and yearbook. (Just in time for the school’s anniversary, all of the school’s yearbooks have been scanned and placed online where they are keyword searchable.)

Today, the space serves as a dining room managed by the eighty students in the Culinary Arts Program of the Career Technology Magnet at Arsenal Technical High School. The students learn about classical food preparation, current trends in the food industry, culinary math skills, restaurant management, and customer service. Although repairs have required the restaurant to operate out of an adjacent building for the past year, by October 1 Colonel’s Cupboard will return to the West Residence where the restaurant opened in about 1980. The restaurant is open to the public during the school year from Tuesday through Friday, 10:15 a.m. through 1:30 p.m. The students, supervised by chef Brenda Snorton, also provide catering and have space available for small meetings. As weather permits, they will now offer seating on the newly replaced wrap-around porch. Look soon for menu updates to the Colonel’s Cupboard web page. Directors of the Junior ROTC also have offices and storage in the upstairs rooms. 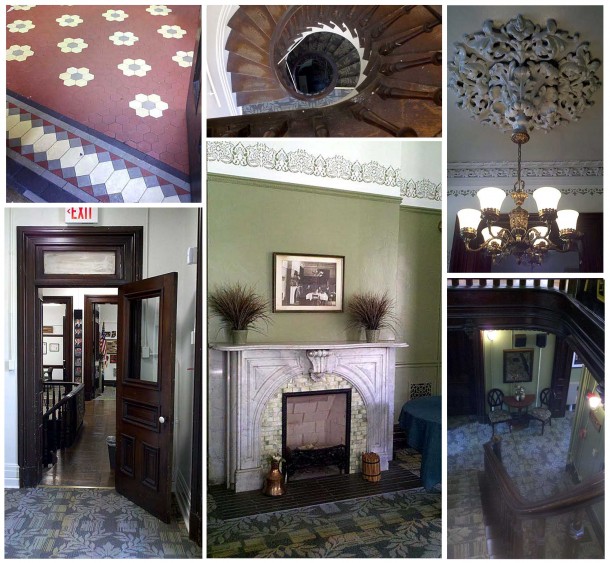 The house was closed for a year to undergo much-needed improvements such as air conditioning, plaster repairs, and decorative painting (notice how the new stenciling matches the wall treatment in the historic photograph). School administrators made efforts to retain the building’s historic integrity, and the house still has the original half-dozen or so marble fireplaces, interior wood trim and doors, decorative plaster cornices, encaustic tile kitchen floor, and curved front and back stairways. Come celebrate the 100th anniversary of “Tech,” take a walk on the campus in the fall, and support the culinary students while dining in this beautiful historic house.