Washington Street has historically been the main commercial corridor in Indianapolis. These photographs show changes in the busy block between Illinois and Meridian Streets. In the 1890s the north side of the street housed stately three- and four-story Italianate and Second Empire structures, but by 2006 was home to the twenty-three story Conrad Hotel.

Between 1885 and 1893 this transfer car stood on W. Washington St. about fifty feet east of Illinois Street. Passengers wanting to change from one line to another had to wait in this stationary car in the center of the street. It was permanently moved in 1893 to make way for the Grand Army of the Republic (GAR) encampment parade, an event that brought about 75,000 visitors to the city. Newspaper articles state that the path was cleared just in the knick of time, so I suspect that the bunting and flag decorations were for the encampment and that this photograph documented the transfer station just prior to the GAR reunion in September 1893.

The building to the left is the old Griffith Block. According to the Historic American Buildings Survey completed in the 1980s: “Built in 1872 by the heirs of Humphrey Griffith, a leading pioneer businessman, the Griffith Block has housed a variety of retail establishments during its long history. In the late 1800s and early 1900s, the editorial offices of the Indianapolis News were located in the block. The third and fourth floors contained lodge meeting rooms, used by several fraternal orders and labor unions. Architecturally, the Griffith Block is one of a few surviving examples in the city of a facade designed in the Venetian Commercial Italianate style, popular in Indianapolis during the 1870s.” 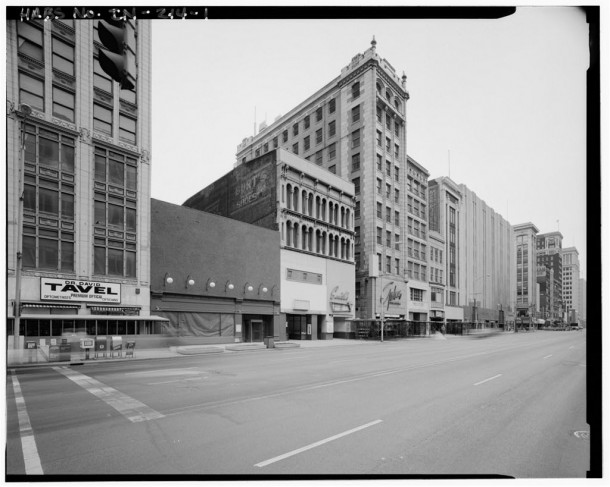 The buildings west (left) of the alley were demolished to make way for Circle Centre Mall. They include the Roosevelt Building, a narrow, twelve-story terra cotta high rise designed in 1922 by Vonnegut, Bohn, and Mueller. Preservationists fought hard to save this structure, but it was razed in 1990. The Griffith Block (third building from the left) was also demolished in 1990, but at least the wonderfully ornate limestone facade survives. One of several “facadectomies”  performed for Circle Centre Mall, the front wall was disassembled, restored, and moved across the street where it was incorporated into a new building. 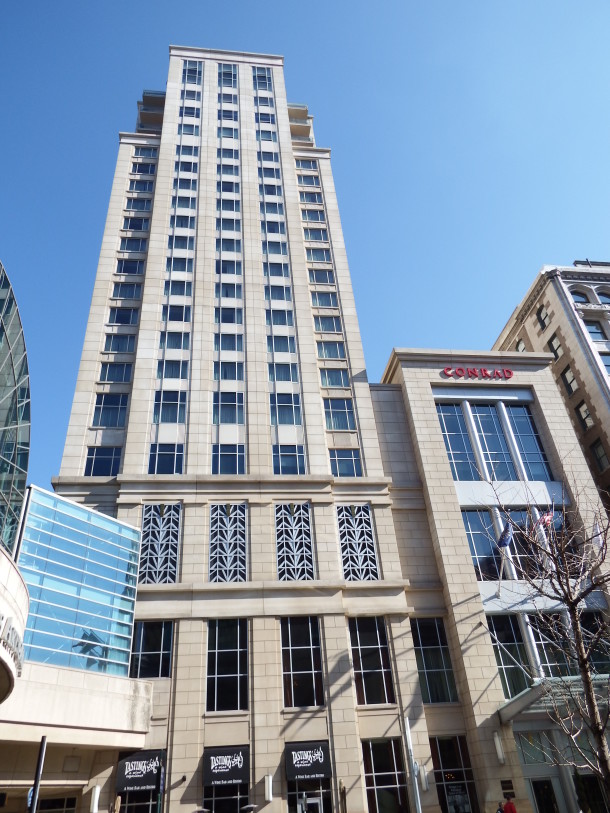 Since 2006 the Conrad Indianapolis has occupied the block, which sat vacant for over a decade as plans stalled for an anchor store for Circle Centre Mall. The alley, actually named Bird Street, has been vacated. The Conrad, a twenty-three story luxury hotel with eighteen residential condominiums, is one of only four in North America and is affiliated with Hilton Hotels.