“Woodruff Place ! … The whole addition is surrounded by a massive, artistically carved stone fence; all the streets laid with Nicolson pavement; all the sidewalks with stone; gas and water pipes to each lot; all the lots front on a handsome plat filled with hundreds of pieces of statuary, copies of the old masters, and large and elegantly designed fountains.” (Advertisement for McKernan, Douglass, and Witt, agents for the sale of lots in Woodruff Place,  Indianapolis People, 13 July 1873, p. 8) 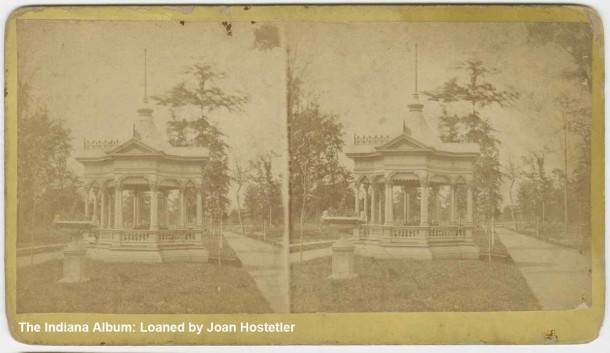 Woodruff Place was planned as an exclusive residential suburb on about 80 acres located directly east of the  U. S. Arsenal between Tenth (then Clifford Avenue) and Michigan Streets.  James Orton Woodruff (1840-1879), a New York native who settled in Indianapolis in 1870 as superintendent of the Indianapolis Water Works, bought the land in 1872. John H. B. Nowland, author of Sketches of Prominent Citizens of 1876: With a Few of the Pioneers of the City and County who Have Passed Away, described Woodruff as “rather below the medium size, light hair and complexion, courteous and affable in manner; his whole contour at once stamps him as a gentleman of culture and education, and such as would command respect from all with whom he is associated.” Surprisingly, there are no known photographs of Woodruff.

The property had originally been purchased in 1821 by Rev. Rezin Hammond at a land sale in Brookville. Nowland wrote: “I recollect well when Mr. Hammond was traveling through the country making selections to purchase. This land [known as Hammond’s Woods or the Dark Woods] had remained without any improvements whatever until purchased by Mr. Woodruff; he paid the heirs of Mr. Hammond two hundred and forty thousand dollars, and since has expended two hundred and fifty thousand in improving and ornamenting the grounds.” Woodruff’s grand house designed by William Le Barron Jenney was the first to be constructed in 1872. Unfortunately, the financial Panic of 1873 forced Woodruff to sell his unfinished development and he returned to New York where his early death at age 39 came as he prepared to launch his next big project: the Woodruff Scientific Expedition Around the World, an early University at Sea concept. For you trivia buffs, Woodruff is also one of three men credited with inventing the rubber stamp. Residents incorporated Woodruff Place as a separate town in 1876 and a group of investors carried out Woodruff’s plans, but few homes were built until the 1890s due to the depression. 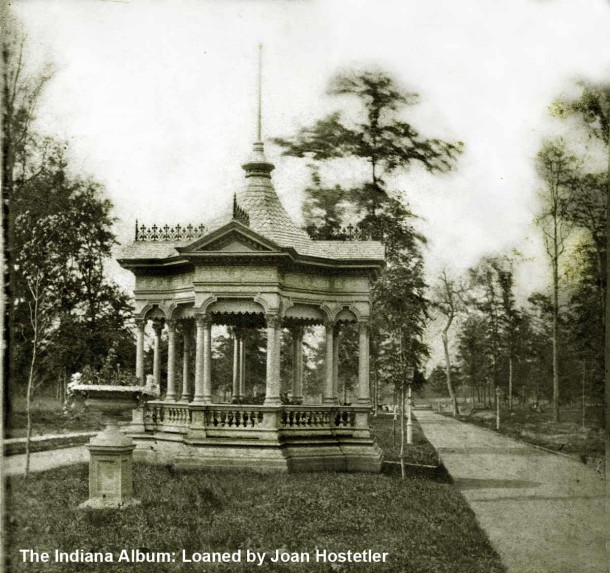 This rare stereoview looks north toward 10th Street (then Clifford Avenue) at an urn and gazebo in the esplanade of West Drive. The image is undated, but fortunately a handwritten notation “Woodruff Place, Indianapolis” is written on the back label for photographer C. S. Judd, a landscape photographer who worked at 95 E. Washington Street. Charles Stewart Judd only worked in Indianapolis for a few years in the 1870s before settling in Tennessee. In 1873 through early 1875 he worked in partnership with William H. Salter, and the pair was known for their stereoviews. By May 1875 he worked solo, specializing in landscapes. It is impossible to know whether he made this negative and print with his earlier partner from 1873 to 1875, or after the partnership ended in 1875, but regardless this is one of the earliest known views of Woodruff Place taken shortly after development. Details visible include the narrow paved streets (later widened for automobiles), street lamps, the stone fence along 10th Street in the distance, young trees in the esplanade, an ornate gazebo, and flowers planted in a metal urn on a pedestal. Several of the fountains and metal decorations were manufactured by J. L. Mott Iron Works in New York City. 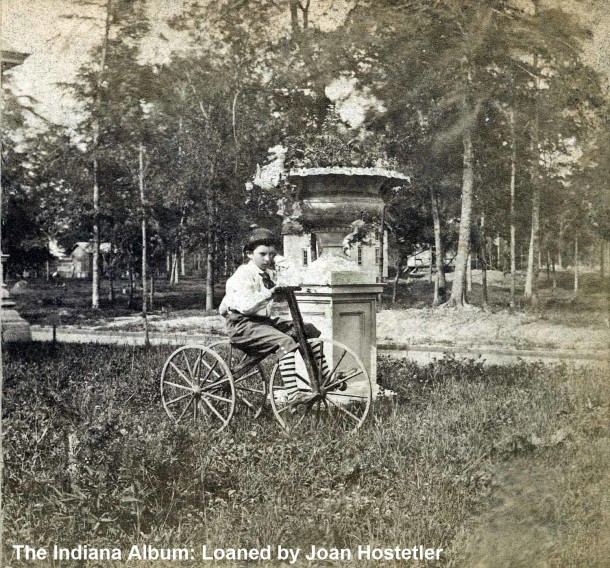 This second view by Judd was likely made at the same time and location, but looking northeast. Note that the boy in the groovy striped socks (a good look for next year’s Tweed Ride) rides a wooden tricycle. He poses next to the same urn and the gazebo is barely visible to the left. A few small outbuildings are visible in the background. Surprisingly, for an area formerly named the Dark Woods, all of the trees seem younger with no large trees characteristic of old-growth forests. 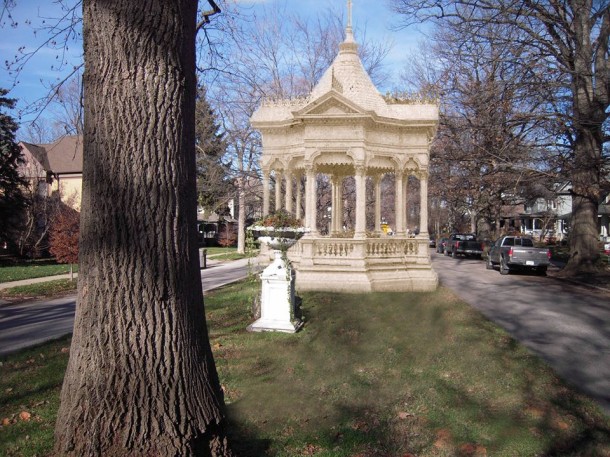 Reader and Woodruff Place resident Duane Palmer shared his composite photograph melding the 1870s gazebo that was razed decades ago onto a recent photograph. The urn is one of the few still standing in its original location. Leaning against the back of the pedestal is a large chunk of stone that some believe is all that remains of the gazebo foundation. The gazebo would have been located near 820 West Drive, about four houses north of Cross Drive.

Woodruff Place operated under its own governance until 1962 when, despite protests from longtime residents, the town became part of Indianapolis. The Woodruff Place Civic League has surveyed the remaining urns, statuary, and fountains, many of which disappeared prior to 1930 and more when the Indianapolis Parks Department took over maintenance of the park-like esplanades in the 1960s. Residents work constantly to clean, paint, plant, and restore the remaining antique elements, many of which are approaching 150 years. One particularly ambitious project involves replacing the crumbling 1870s fence with poured concrete made in sections by a team of neighbors. 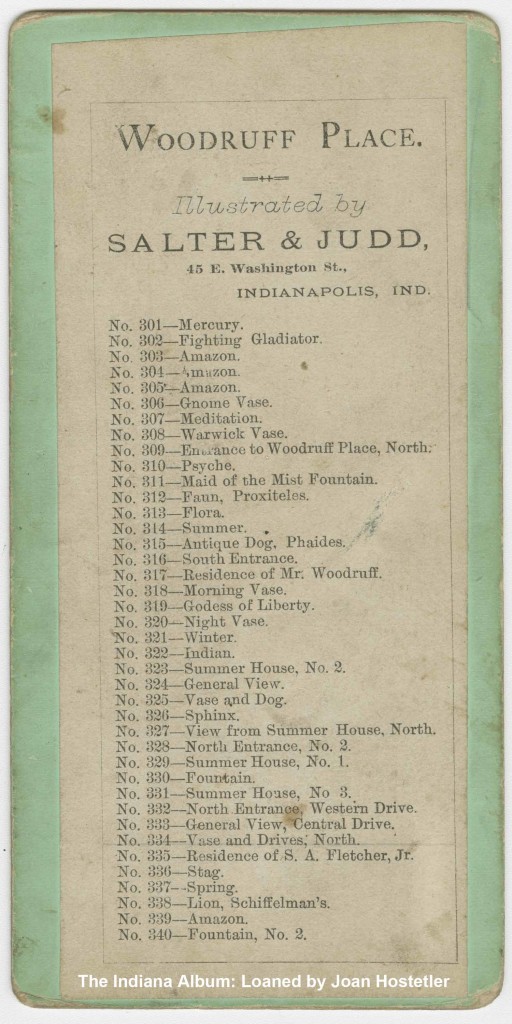 Backlist of 40 stereoviews of Woodruff Place made in about 1873-1875 by photographers Salter & Judd.  (The Indiana Album: Loaned by Joan Hostetler)

There are many more stereoviews of Woodruff Place and Indianapolis floating around out there and we’ve only scanned a few. Please keep us in mind if you have any of these that we may copy and share with the public.