After witnessing people jamming into packed movie theaters and sensing a good business opportunity, Indiana native Anzi Zaring sold his laundry company, bought a neighborhood theater in 1910, and never looked back. He steadily grew his business in the ‘teens and early 1920s until finally constructing his dream building:  Zaring’s Egyptian Theatre.

Located just north of Fall Creek Boulevard at 2741 Central Avenue, the theater opened on November 2, 1925. Wanting an out-of-the-ordinary structure, Zaring hired Indianapolis architect Frank B. Hunter. Hunter had recently seen Grauman’s Egyptian Theatre in Hollywood and suggested an Egyptian-themed design. The discovery of King Tutankhamun’s tomb in 1922 sparked a worldwide interest in ancient Egypt and dozens of movie theaters across the United Stated were built in the Egyptian Revival style. Designed as an Egyptian temple, the recently constructed Zaring Theatre (photographed in 1925 during its first year of operation) appears to have been faux-aged with a smoky finish. The symmetrical stone block facade had columns flanking the box office, spears supporting a canopy, and bas-relief panels with Egyptian motifs.  (Check out this alternate 1925 view from the Indiana Historical Society.) 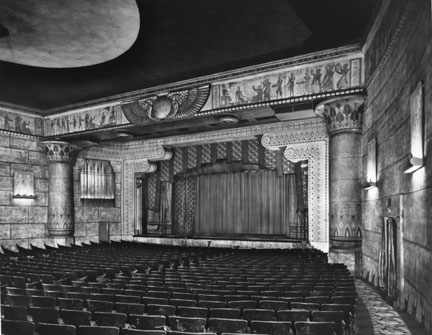 Quite elaborate for a neighborhood theater, the 1100-seat auditorium featured columns and walls painted with Egyptian designs and images of pharaohs. Zaring’s daughter recalled that custom-made lounge chairs were adapted from furniture found in King Tut’s tomb. A genealogy of the Zaring family describes the atmospheric interior: “The ceiling of the auditorium represented the night sky with stars set in a dark blue heaven. Gray clouds rolled over the sky continuously. The design was to create the effect of looking up at the sky from an Arabian tent. The balcony was above the corridor at the rear of the auditorium and was so designed that it did not block the view of the sky of anyone seated on the main floor. As late as 1940 Amzi was enriching the decor with special carpets and hand carved wall lights with copies of authentic Egyptian plaques.” Music was provided by a two-manual Marr and Colton organ, a duplicate of the Piccadilly Theatre organ in New York.

Zaring ran the theater for over thirty years, working with his wife Mayme and long-time employee and sister-in-law Bertha “Bertie” Zaring. The Zaring (sometimes called The Egyptian) soon shifted from silent movies to talkies and was one of the earliest neighborhood theaters to show matinees. Unsatisfied that only downtown theaters were allowed to show first-run movies (other movie houses had to wait twenty-eight days), Zaring filed suit against Loews and Paramount Pictures in 1949. Accusing them of “unreasonable and illegal dominance of Indianapolis motion picture distribution channels,” he eventually struck a deal and settled out of court. The theater was also used for community events such as high school concerts, early performances by Footlite Musicals, and a yearly Christmas party for Indianapolis orphans. Shortly before Zaring died in 1956, he sold the theater to David and Kelly Levitt. By 1966 the theater was used for burlesque performances.

The theater struggled for a few years and was demolished in 1969. Since then, the land has been vacant but the memoirs of many local baby boomers recall the days of westerns and matinees at this unique Indianapolis movie theater.

So what do *you* remember about Zaring’s Egyptian Theatre? 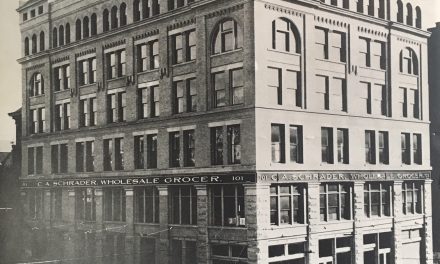