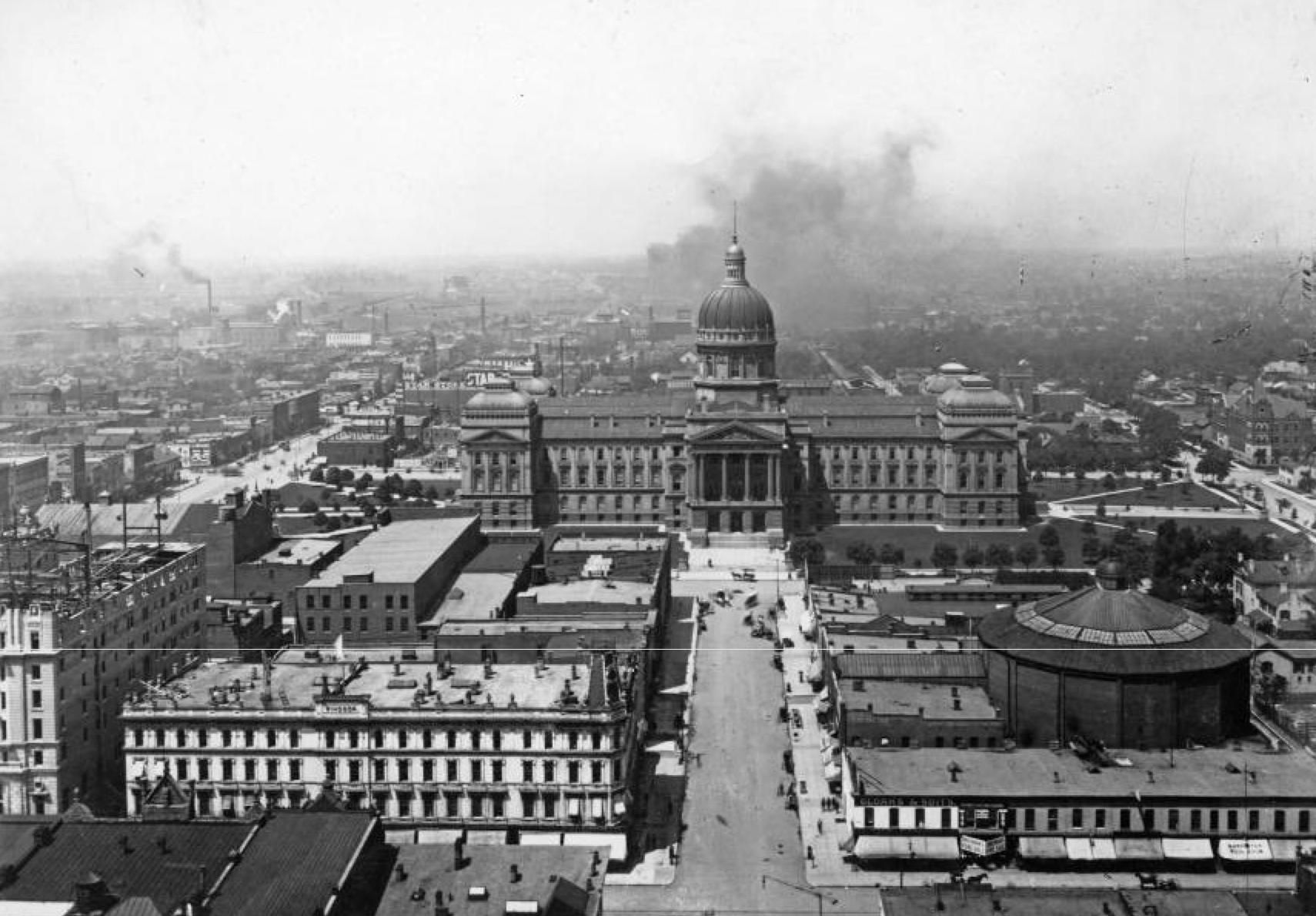 Circa 1900 view of West Market Street, showing the Cyclorama and future site of the ITT 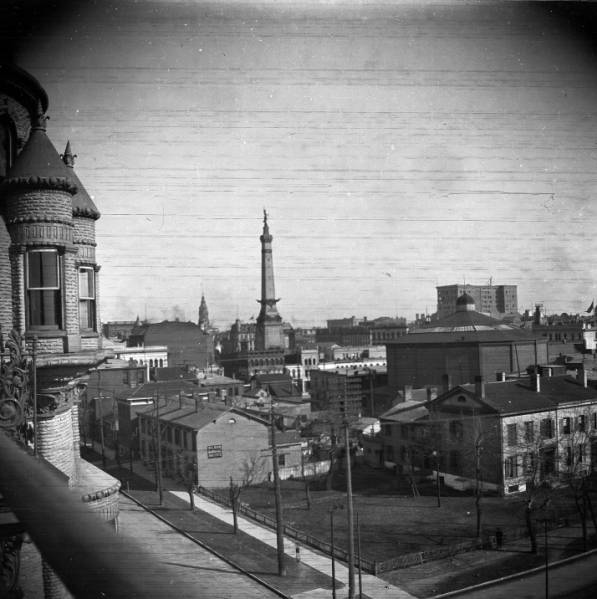 1890’s view of the future ITT site and Cyclorama, looking southeast from Capitol and Ohio. 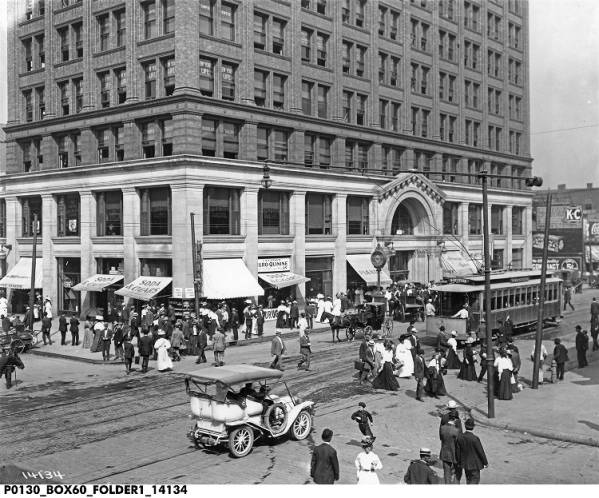 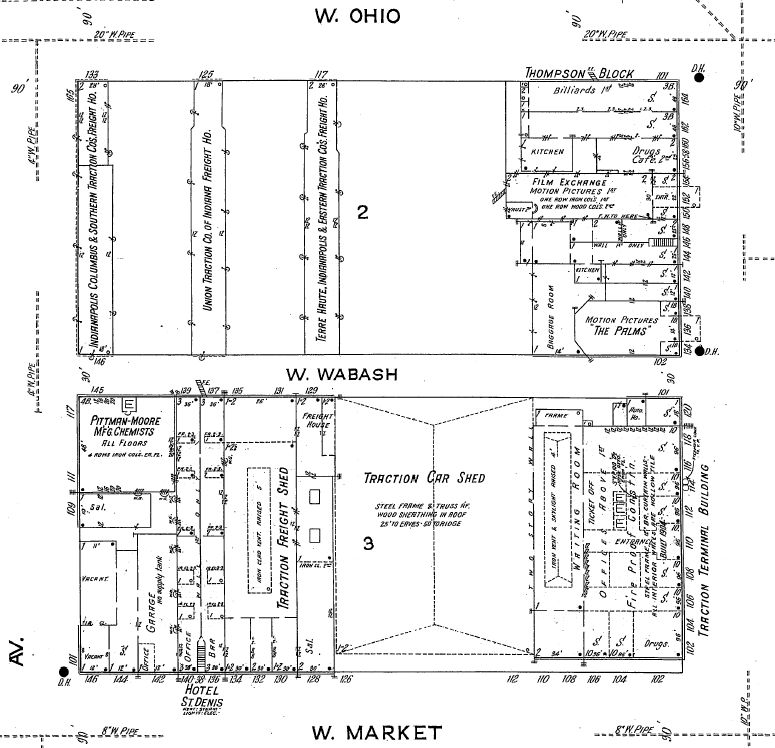 Occasionally, an article on light rail proposed for Indianapolis mentions that electric railroads are nothing new to Indy, being that a century ago there were streetcar lines throughout the city, and long-distance interurban routes to nearly all parts of the state. The interurbans were electric railroads, operating on streetcar tracks in city streets and on private rights-of-way in between cities. They were primarily passenger-oriented, with more frequent and often faster schedules than the existing steam railroads, and far faster than traveling the unpaved roads of the time.

Indianapolis was the center of the state’s sprawling interurban system, and between 1900 and 1903, eight companies had connected the surrounding countryside and towns with Indy. Initially, the individual traction railroads maintained their own depots, but by 1903 they determined that a joint terminal serving all the interurban lines should be built. The block located to the northwest of Market and Illinois Streets was chosen as the site, with the depot occupying the entire southeast quarter of that block. The northwest quarter would also be developed for interurban freight stations.
In 1903, the city block was a mix of largely vacant commercial storefronts, townhouses, and the former Cyclorama building. The Cyclorama was a relatively huge round structure built in 1888 to house the briefly-popular cyclorama paintings. The fad ended after a few years, and the building was reused for other purposes, including a zoo. By 1903, it had become a garage for recharging electric cars.
The Traction Terminal was designed as two structures: a nine-track train shed to shelter the interurban cars, and a modern nine-story office building designed by the famed D.H. Burnham and Company. Ticket offices and waiting room, restaurant, drugstore, and a variety of other shops occupied the first floor of the office building, and the marble-finished basement contained a barbershop, smoking lounge, and convenience facilities. 250 offices were on the upper eight stories, occupied by tenants ranging from the interurban companies, to real estate brokers, to French tailors.

1908 view of the Traction Terminal building. 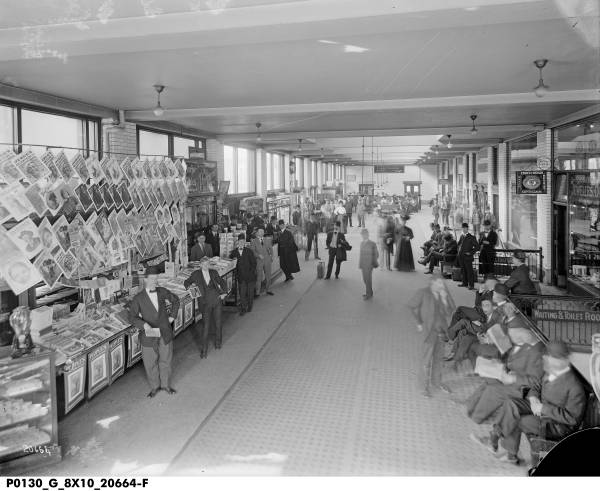 On the evening of September 11, 1904, the first interurban, a car from Plainfield, entered the new terminal. In 1906, nearly 4.5 million passengers passed through the depot, and by 1910, one could travel out of the city on a dozen different interurban routes. Ridership through the terminal grew to a 1916 peak of 7.2 million passengers that year, with 462 trains per day. After that, the interurban railroads, and therefore the Traction Terminal, entered a slow decline due to the World War, recession, poor financing and management, and ever-increasing competition from private automobiles.

1905 view of the waiting room and concourse in the Traction Terminal. The train shed and tracks are to the left, the main building to the right

In order to be more competitive, the interurbans supplemented their rail routes with buses, and in 1925, one of the former interurban freight buildings along Ohio Street was converted into a bus station (the freight depots having been moved to site of the former Greenlawn Cemetery on Kentucky Avenue in 1924).

Check out this 1921 view of the nine track train shed. 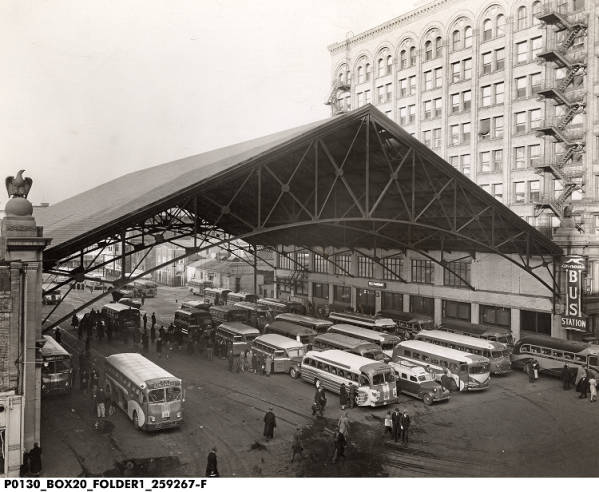 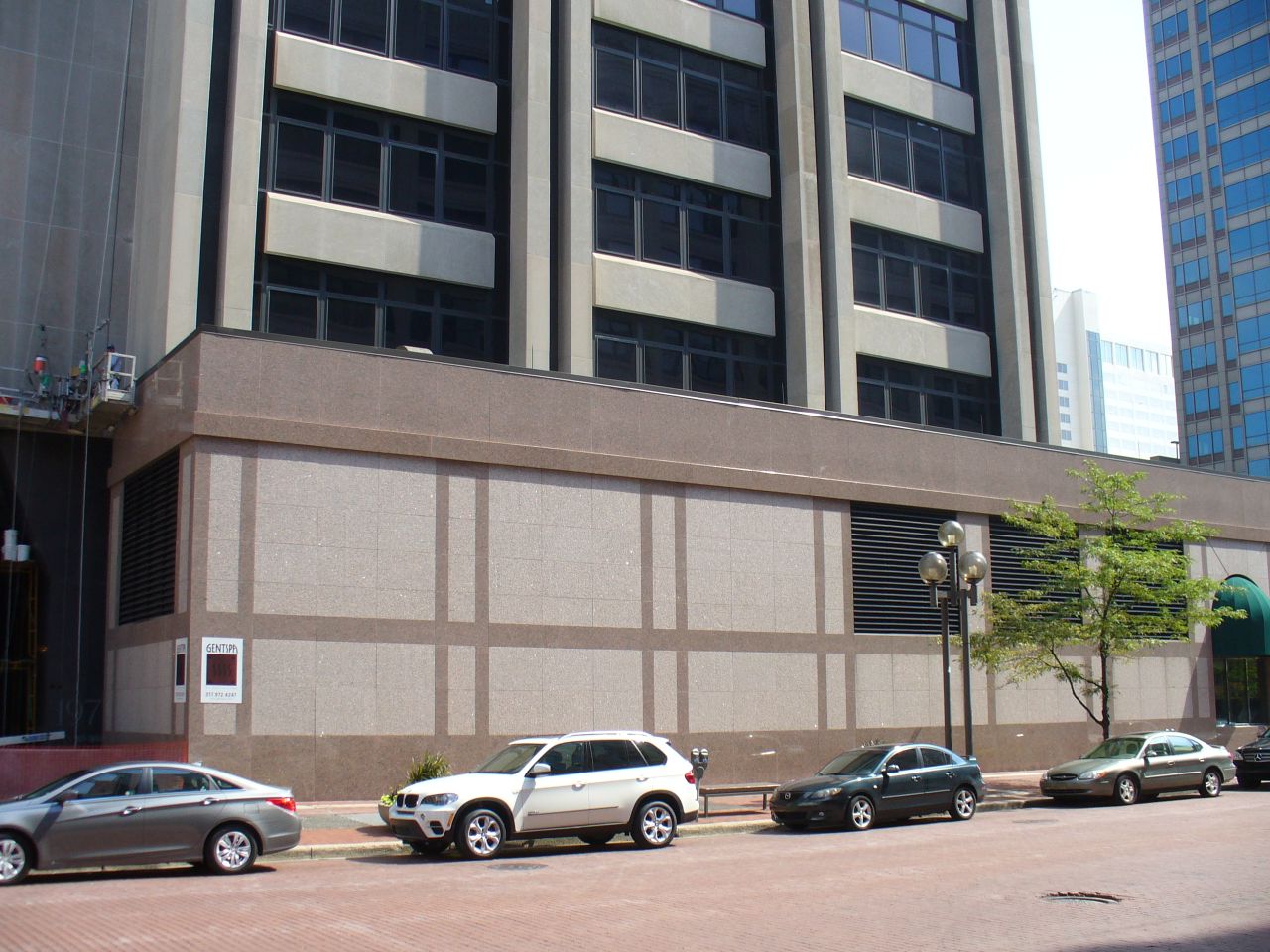 The depot in 1943, after complete conversion to buses. The stone eagles are visible at the top corners of the shed.

In October, 1968, the train shed was dismantled and donated to the Indiana Museum of Transport and Communication (now Indiana Transportation Museum) in Noblesville. However, it was found to be infeasible to reconstruct due to damage and cost, and the ironwork was scrapped. The Traction Terminal office building stood, increasingly derelict, until April 1972. 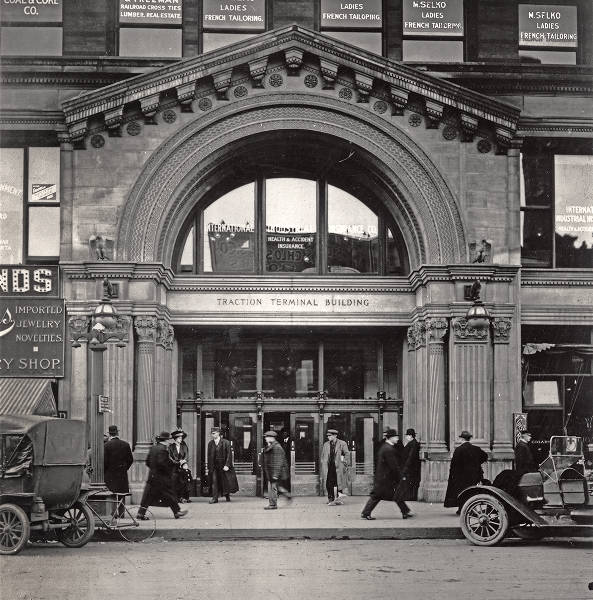 The main entrance off of Illinois Street, 1908 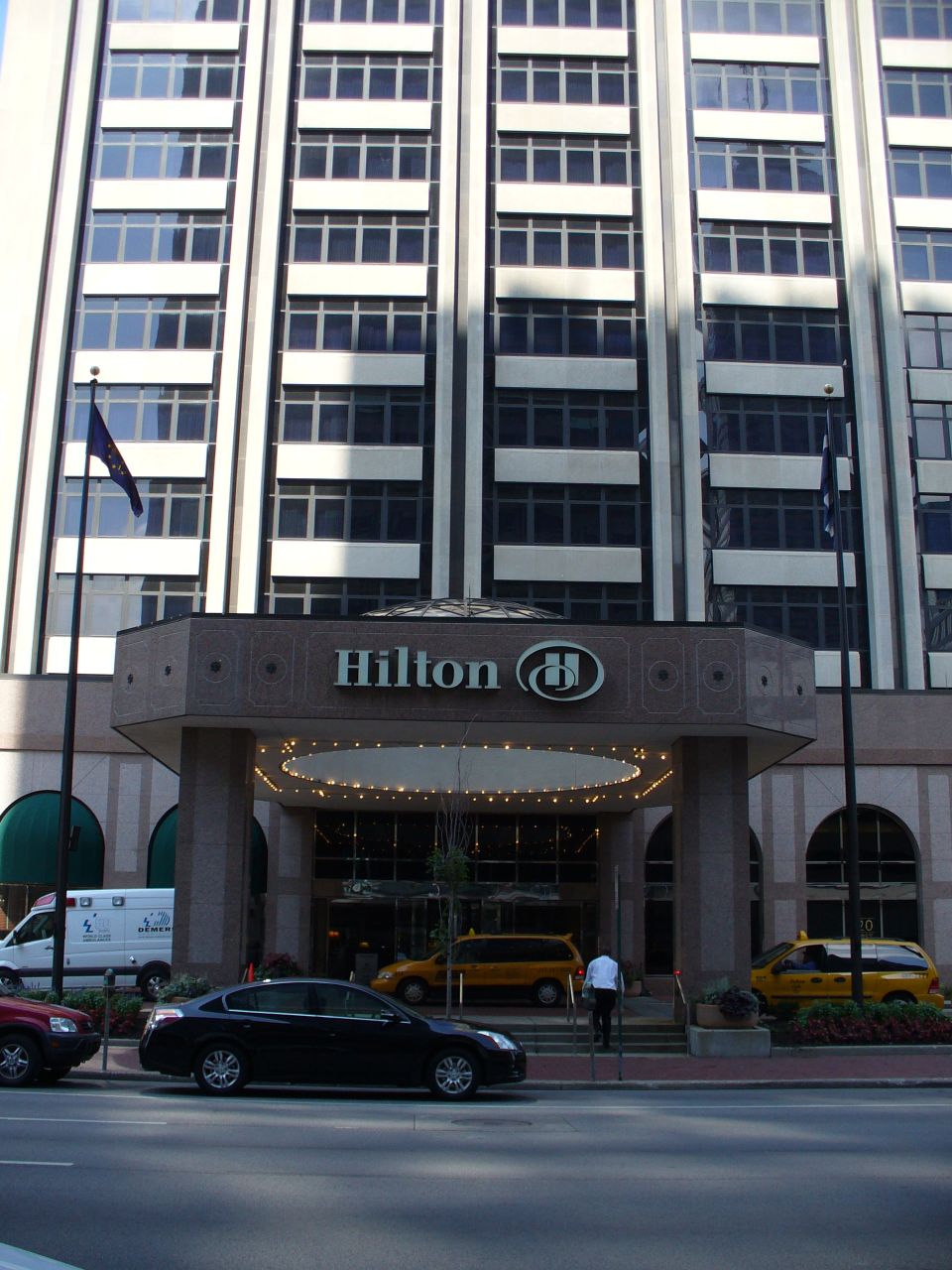 On the site of the train shed was constructed a modern office building (headquarters of Blue Cross and Blue Shield of Indiana), which for a brief time stood adjacent to the Traction Terminal building. The site of the TT building was a plaza until about 1998, when the office building was converted into a hotel (now the Indianapolis Hilton), and the plaza redeveloped into the hotel lobby and entrance driveway. 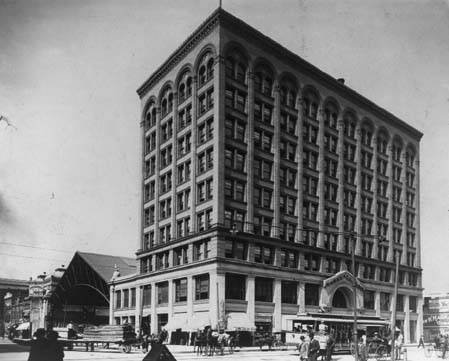 Street-level view of the building soon after opening 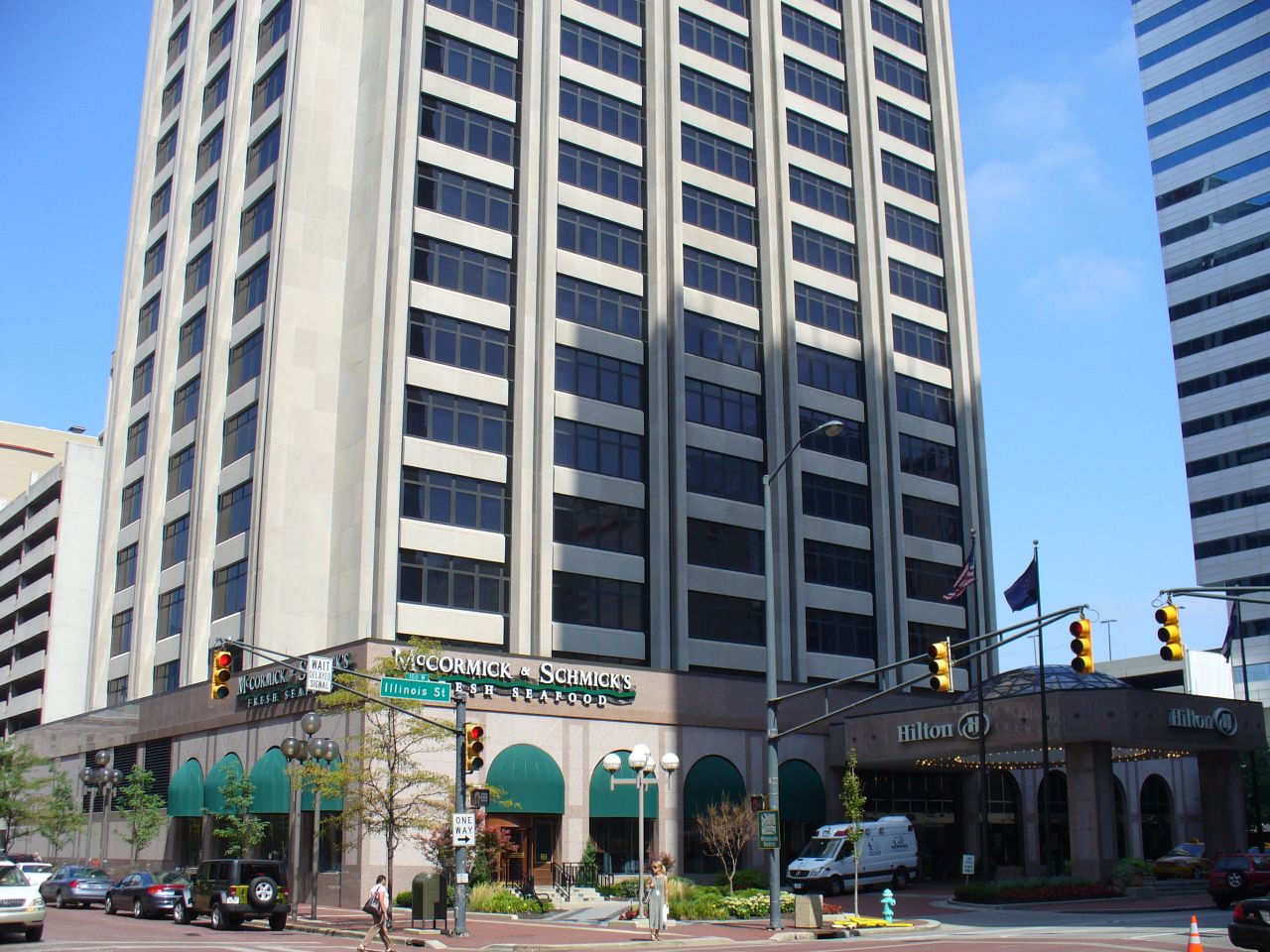 On Market Street, where there once were interurban cars on nine tracks and a 50-foot tall train shed, there is now a 30-foot blank concrete wall. The only known remnants of the Indianapolis Traction Terminal are the two stone eagles that once flanked the top of the train shed; they are now located on the steps of the former City Hall/former State Museum along Alabama Street. It is a sad ending to a beautiful building and magical means of transportation. 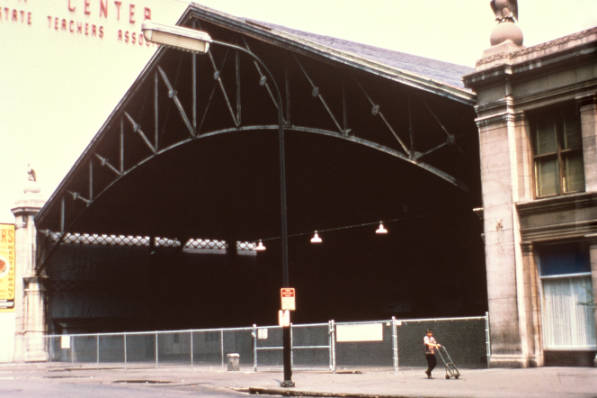 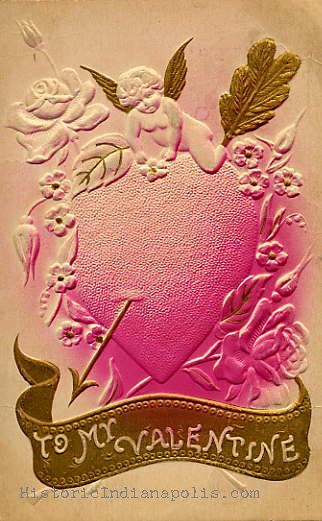