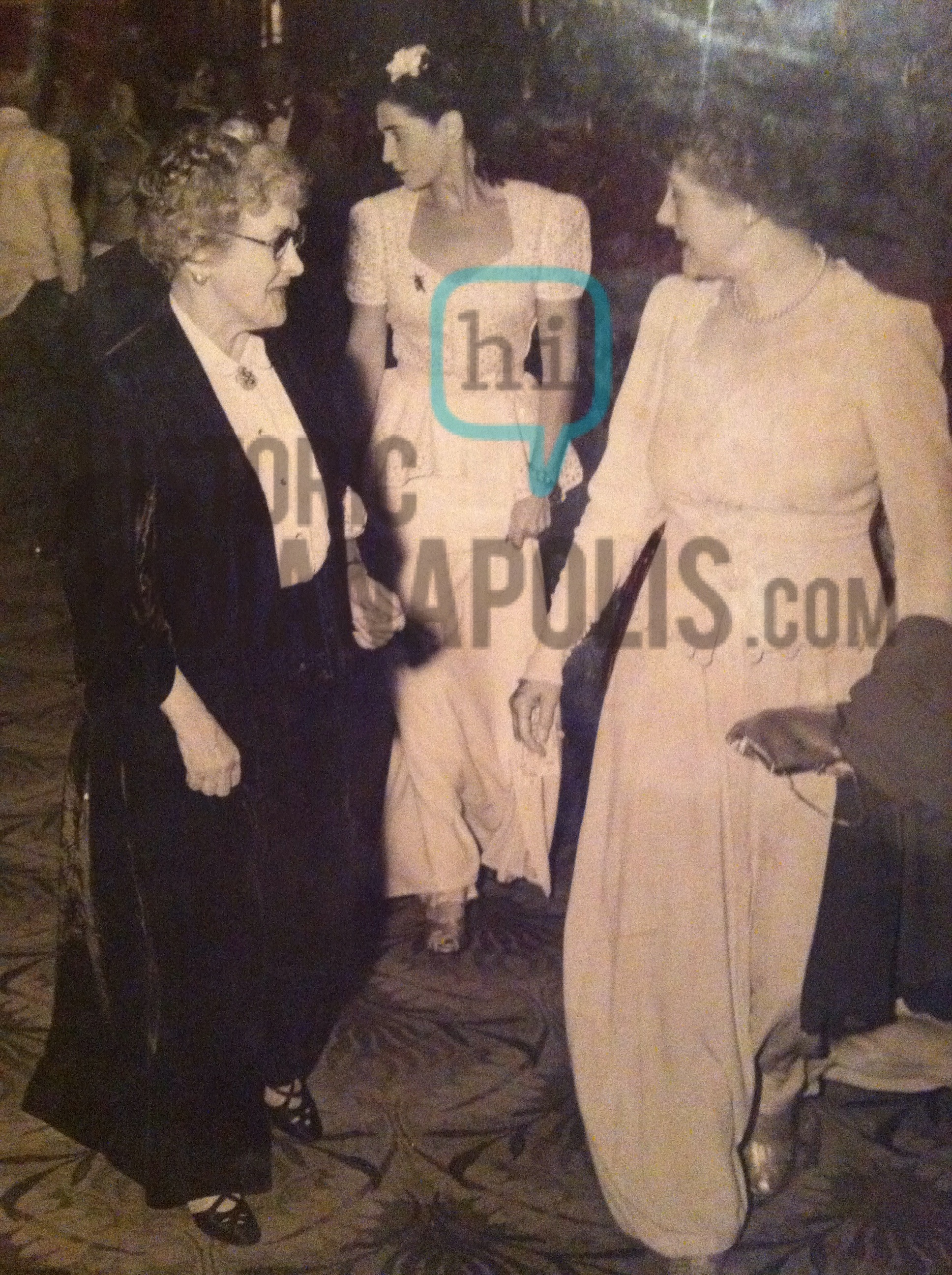 Imagine you are from Indy (not too hard, right?) and moved away, and you’ve become close friends with Vogue Editor-in-Chief, Anna Wintour. Everyone who cares the slightest bit for fashion in Indianapolis would know this (and likely a few people who don’t), wouldn’t you agree? There would be some collateral cool accorded our fair metropolis, n’est-ce pas?

So, let’s roll the clock back 80 or so years. The Editor-in-Chief of Vogue was Edna Woolman Chase, and one of her dearest friends was Indianapolis-bred artist, Virginia Keep Clark.

After marrying Marshall Clark of Evanston, Illinois, Virginia left Indianapolis in 1906, never to live in the city again. Her mother remained here for a time, so Virginia still visited her adopted hometown. She also returned for a solo art show at the John Herron Museum (since morphed into the IMA) in 1941.  She and her husband moved to Evanston, then Chicago and not long after the close of World War I, to New York City–eventually securing a summer home in Oyster Bay on Long Island. It was in Oyster Bay that Virginia and her husband became neighbors, and subsequently, life-long friends with Edna Woolman Chase and her husband, Richard Newton. 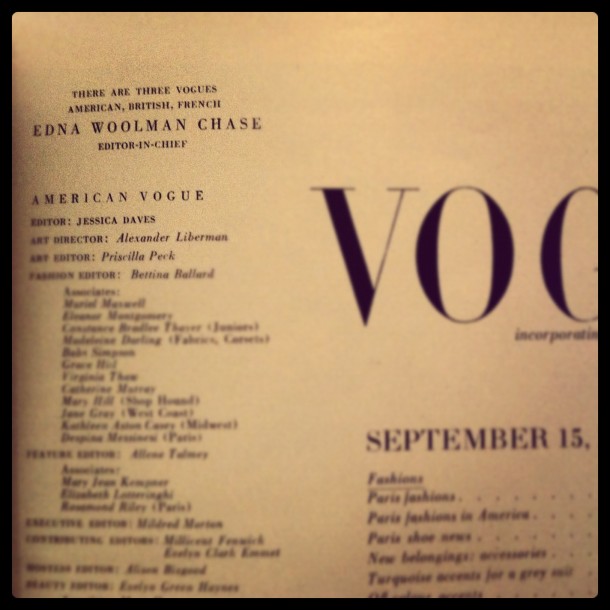 Mrs. Newton, as Edna Woolman Chase was known in her private life (after her 1921 marriage) would go on to become the longest reigning editor (to date) of Vogue magazine and is credited with creating the first American fashion show. The “Fashion Fete” was put on in 1914, today acknowledged as the singular defining event that kick-started the American fashion industry. World War I prevented the import of French couture to New York and Chase’s idea was for American designers to create their own designs. She concurrently persuaded the social elite of New York to attend the event, allowing these two groups to intermingle. Prior to WWI, only Paris designs existed for the social elite. American designers and the first fashion show were born on that day in November 1914–and at the same time, in a philanthropic spirit–raising money for war widows and orphans. Chase is also credited with closing the gap between high fashion (couture) and mass production–allowing for the less than upper-class ladies to luxuriate in styles more closely approximating those enjoyed by the upper-class. 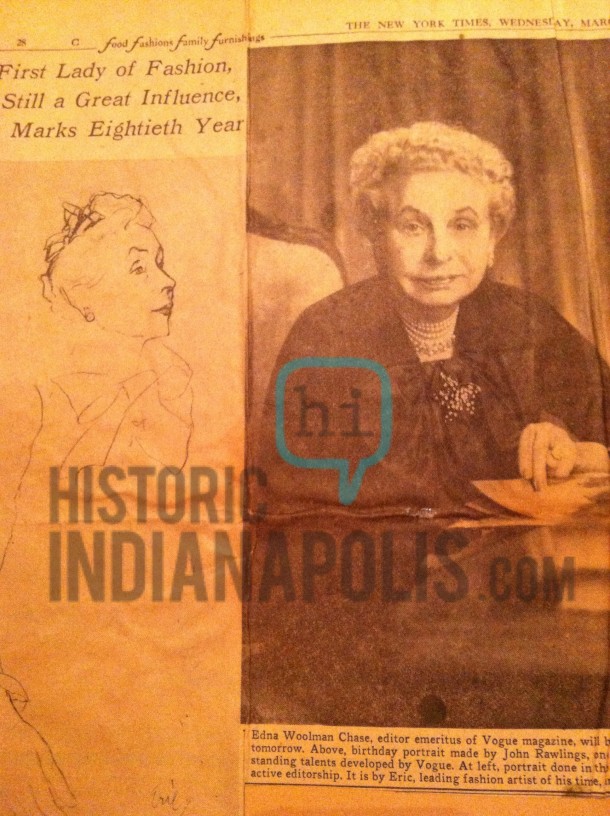 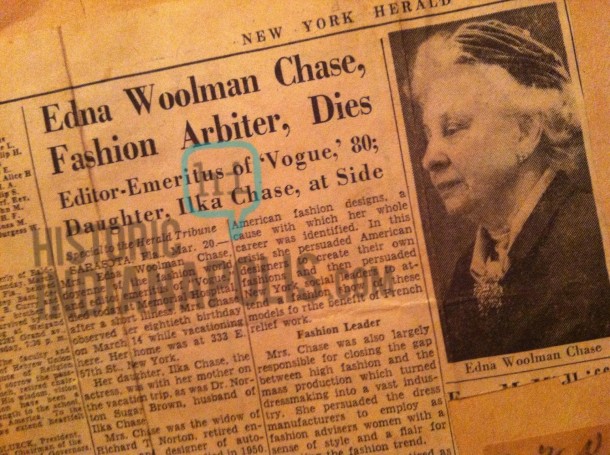 Most people would like to leave some kind of legacy, and to the fashion world, Chase’s was ample. Having researched Virginia Keep Clark for 7+  years, I first learned of the friendship between Indy’s hometown girl and the doyenne of fashion through a series of society page entries in the Winter Park, Florida newspaper. The “Richard Newtons” would frequently visit the “Marshall Clarks” at the Winter Park home they acquired in the early 1940’s.  Later obtaining Virginia Keep Clark’s last scrapbook, there were clippings about Virginia’s friend Edna Woolman Chase–her 80th birthday and her obituary– towards the front of the scrapbook. There was also a photo of the two ladies attending some sort of evening out. The queen of the fashion world and the artist from Indianapolis out on the town together– fun fodder for any imagination. 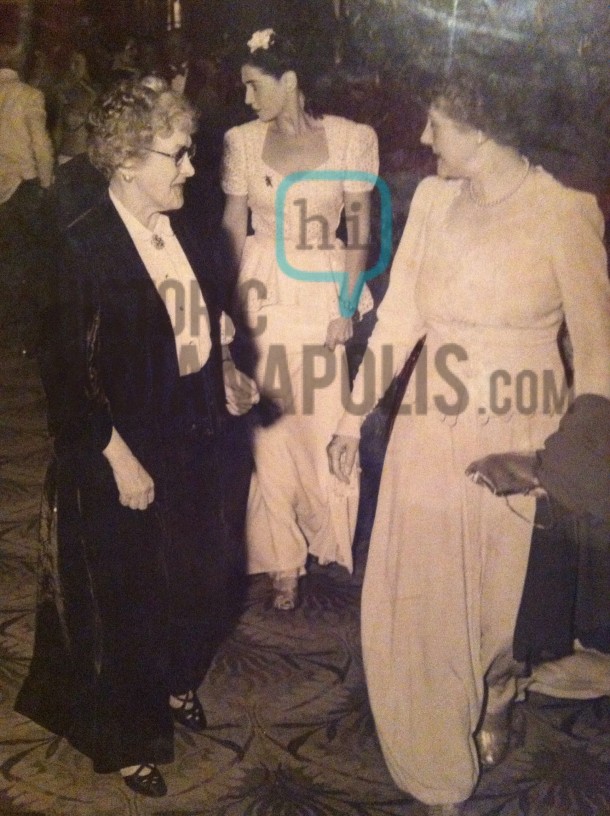 The scrapbook also contained a couple of clippings from times that Virginia’s portrait work was featured in Vogue, back when the magazine was still a weekly publication. 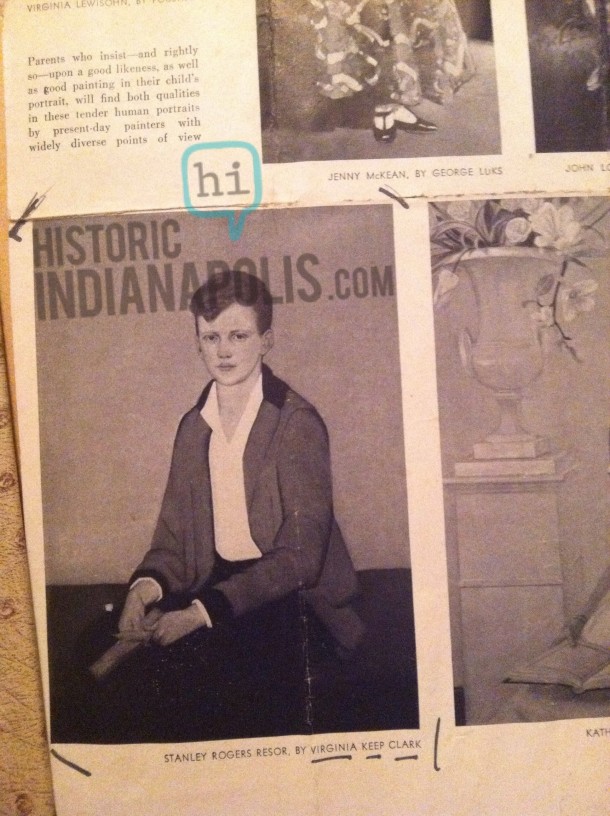 from the scrapbook of Virginia Keep Clark, April 15, 1931 issue of Vogue

Being personally acquainted with the remaining members of the Clark family, it was fascinating to hear first-person accounts of Mrs. Chase, and her famous actress daughter, Ilka Chase from the Clarks’ niece, Nancy. When Nancy was newly graduated from high school, she had come to her Aunt and Uncle’s summer home in Maryland for a visit. It was 1937 and it so happened that the Richard Newtons were visiting at the same time. Mrs. Chase generously offered to find a job within Vogue for Nancy, but Nancy had little interest in fashion, politely declined, and went on to become an aviation machinist in World War II, among other things.

Edna Woolman Chase’s story is the stuff of dreams for a girl today–or, undoubtedly, to girls of yesterday or tomorrow as well. Born to Quaker parents, raised primarily by grandparents and with no training for business, she started at 3-year old Vogue at age 18 (earning $10/ week) addressing envelopes in the circulation department. Edna soon advanced into art and editorial departments and when the magazine was purchased by Conde Nast in 1909, she was made managing editor until 1914, when she was officially made Editor in chief of American Vogue. As if that wasn’t enough to shoulder, she would later become editor-in-chief of British and French Vogue as well.

Her entire story is inspiring, and her 1954 book Always in Vogue (co-written with her daughter) is a fascinating “Who’s Who” of the fashion world of her era–with personal accounts and interactions from the House of Worth to Coco Chanel herself. It would be fair to say that without Chase, Vogue may not have lived to see ithe 120th anniversary currently being celebrated. The formative years are undoubtedly the toughest, and this woman saw the magazine through two world wars, and the great Stock Market Crash of 1929. There were lean times unlike anything we know today and her contribution to the fashion world should not be underestimated.

Not long before her 80th birthday, she “… expressed an opinion on the future of fashion publishing as  a career for young women, pronouncing it not as promising as it was in her day. The reason, she believes, is because there are too many magazines and too many too much alike to stimulate individual initiative. As to the quality of fashion reporting today, she pronounces it not good enough. It reflects, she says, too little discrimination and critical evaluation, with everyone getting on the band wagon and extolling the same few designers. Her hope–and suspicion–is that there is more creative talent to be found than the press is ferreting out.” (New York Times, March 13, 1957) She had retired in 1951, but remained editor emeritus–never lacking an opinion on fashion til her dying day.

Chase died shortly after her 80th birthday while vacationing in Sarasota, Florida, but her last home in New York City appears to still exist at 333 E. 57th Street. And while the almost forgotten, longest reigning Vogue editor  has been overshadowed by that of the larger-than-life, bespectacled Ms. Wintour– Chase too, had some proclivities for which she was known: she positively detested open-toe shoes for street wear. “Open-toed shoes are inappropriate, ugly and dirty,” she said.  Being born in the era of corsets and carriages (and horses), makes her stance understandable. We all bring our unique world-view to whatever we do, and these ladies are no exception. Have you discovered and embraced yours?

Perhaps the best known quote of Edna Woolman Chase: “Fashion can be bought. Style one must possess.” Agreed.

This week, Indianapolis joins other cities around the country for Fashion’s Night Out, a recent introduction to the world of fashion. Find more information about the September 6th event at Pattern Indy, the go-to resource for those interested in cultivating a future for fashion in Indianapolis. Check them out, or send all interested parties their way.

P.S. I have given a talk called “Six Degrees of Separation: You and Virginia Keep Clark” to a number of local organizations–most recently the Kiwanis Club in Broad Ripple, filling in last minute for Dan Wakefield. The first comment at the conclusion of the talk was one of the biggest compliments of my life: “This was better than Dan Wakefield.” Wow.

I’m looking for other groups with which to share this talk, so if you are in need of a speaker, feel free to inquire–email feedback (at) historicindianapolis (dot) com 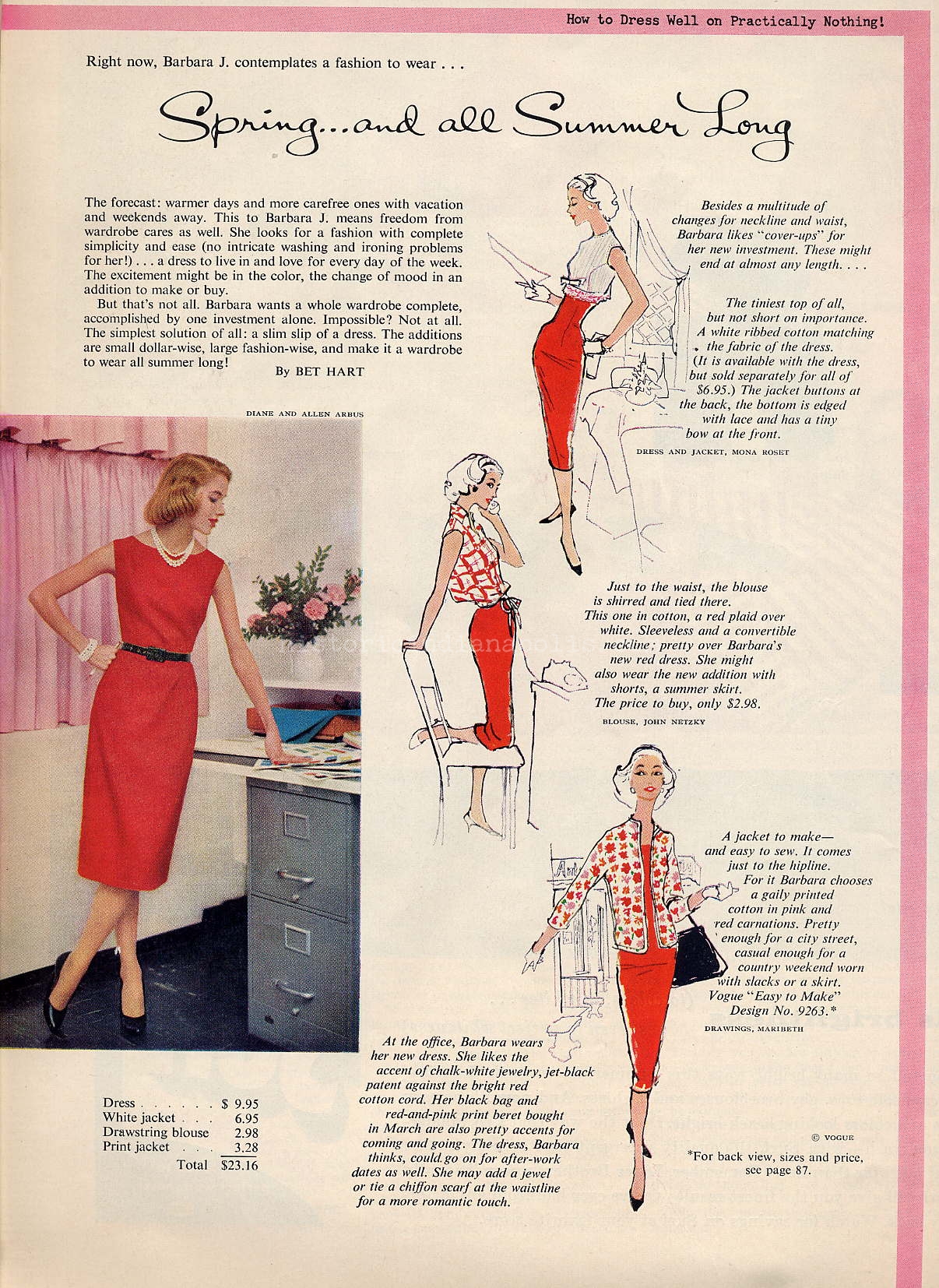 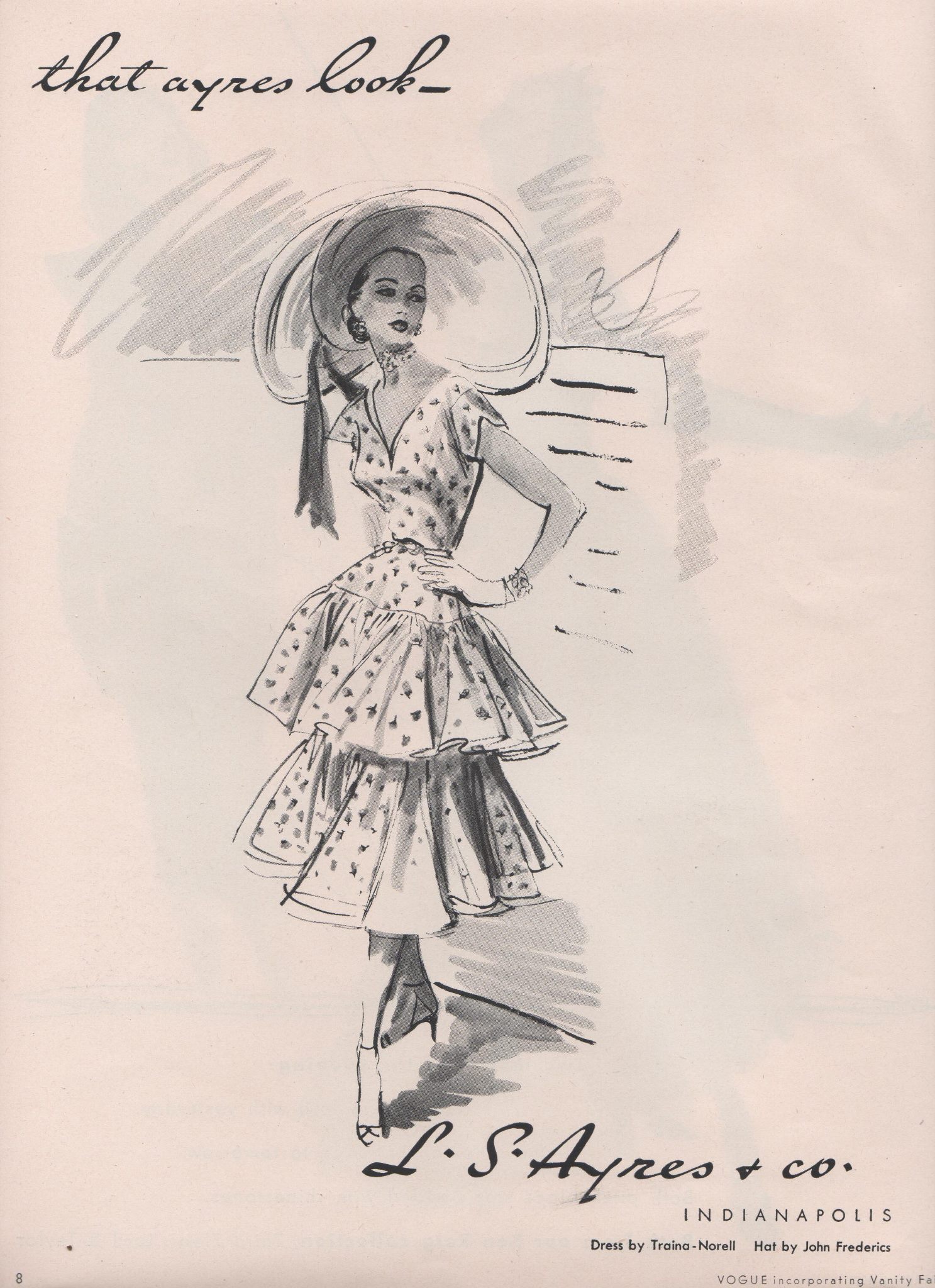 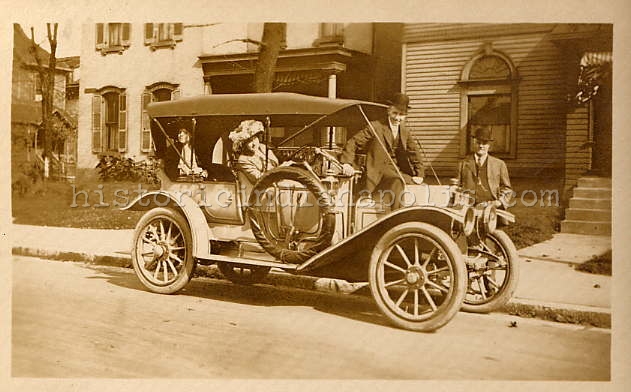 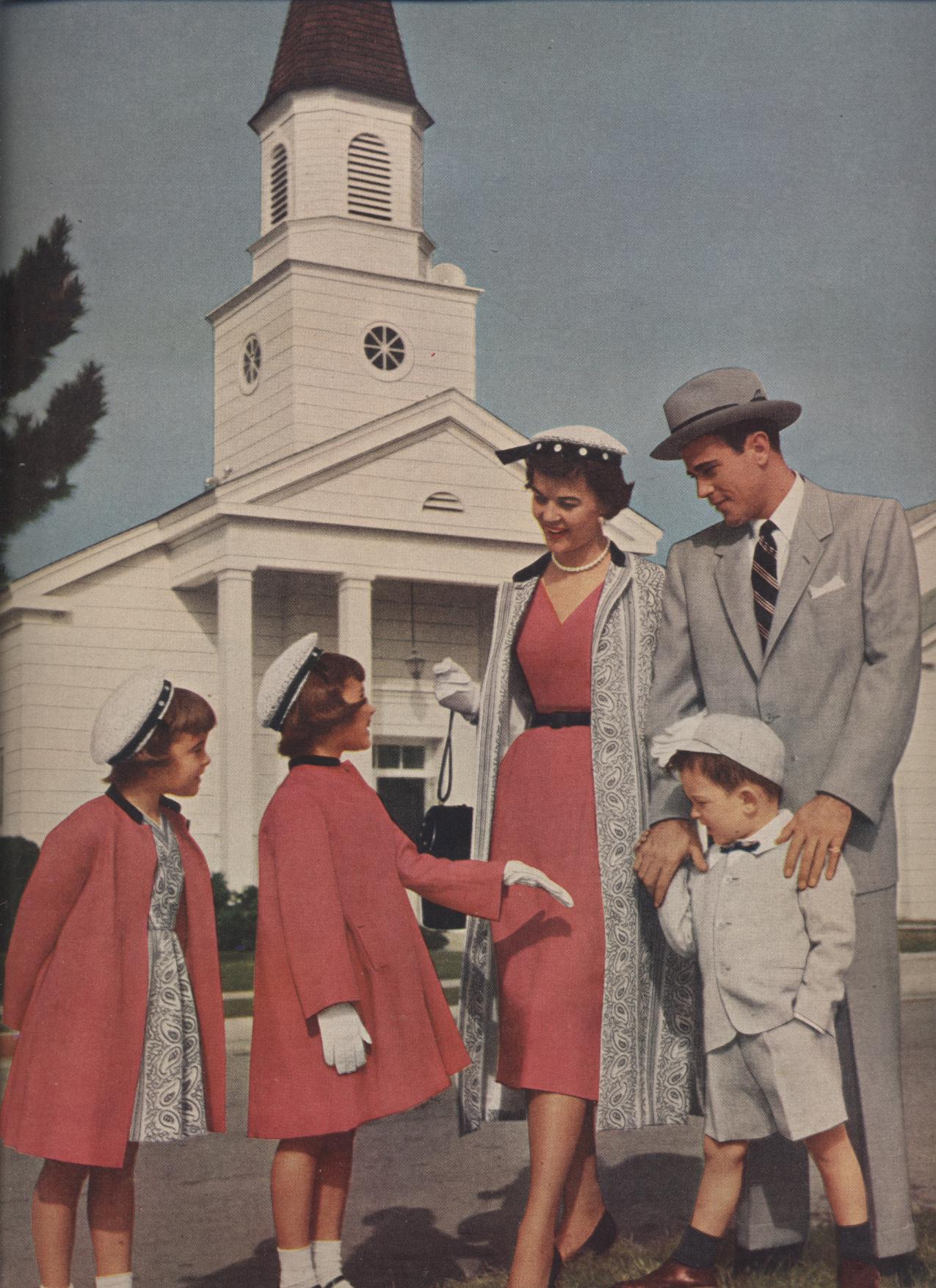 Ladies Lounge: Ghosts of Easters Past