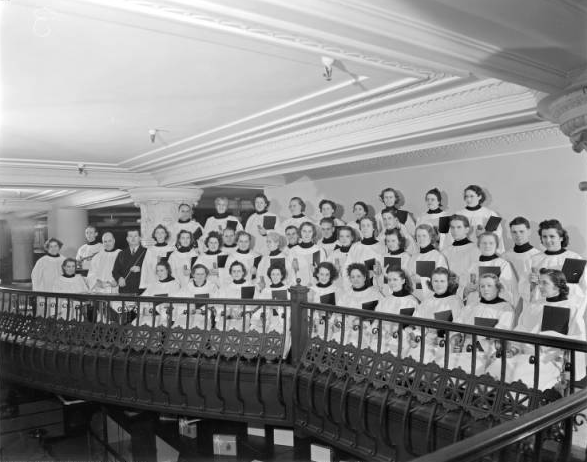 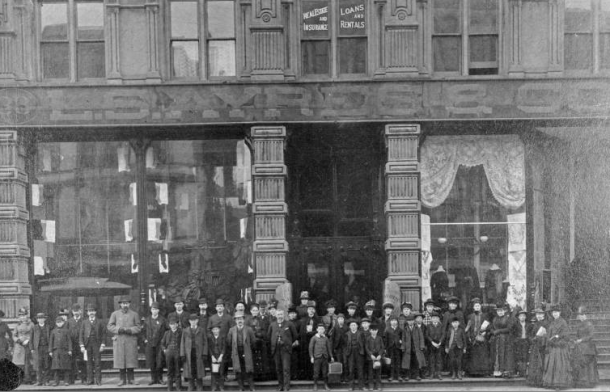 For seventy years, from 1922 to 1992, the place to celebrate holiday traditions in Indianapolis was L. S. Ayres & Co.

Animated window displays drew crowds of fascinated onlookers to L. S. Ayres & Co.’s downtown store.  Inside, the store was festively decorated with garlands of greenery spiraling around the massive columns and special trees.  Shoppers could donate to charity by buying a link in a paper chain. The whole first floor of the store was decorated with these chains.

One elevator was decorated to resemble a fireplace and chimney, complete to the mantelpiece with clock and stockings and a brick-patterned interior.  Dubbed “The Chimney Express”, it whisked children directly to Toyland, first on the sixth floor, later expanded and moved to the eighth floor.  All of this was created largely by Ayres employees.  Custom work was also ordered from national companies like Spaeth, which in 1983 built the scene of the L. S. Ayres & Co. corner during the 1920s Christmas season – where you can still enjoy this scene at the Indiana State Museum’s Celebration Crossing exhibition.

From 1922 to the 1950s, Ayres encouraged staff to join the Ayres’ Carolers, who serenaded customers from the balcony at 4:00-4:30 every afternoon during the Christmas season.

Ayres’ iconic red box with a Christmas tree in the corner is still recognizable to many.  Along with the slogan, “A Gift from Ayres Means More,” it heralded a special present. 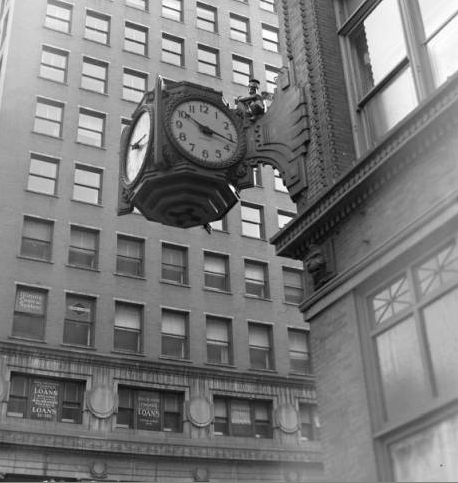 Since 1947, a 1,200 lb bronze cherub has mysteriously appeared atop the Ayres clock at the corner of Washington and Meridian streets on the evening before Thanksgiving, and disappeared again at midnight on Christmas Eve. The cherub originated not as a statue, but a catalog drawing.

In 1946, with World War II just ended and wartime production not yet shifted to produce consumer goods, the store’s annual Christmas catalog was decidedly sparse, so staff artist Virginia Holmes created flocks of cherubs to decorate its pages.  The idea flew, and store officials hired a professor at Herron Art School, David K. Rubins, to create a statue to perch on the store’s famous clock.  When the May Company closed the downtown store in 1992, the cherub was spirited off to its headquarters in St. Louis, and a “Free the Cherub” Committee had to be formed to bring it home. Now owned by the city of Indianapolis and guarded by Indianapolis Downtown Inc., the cherub still makes its annual appearance on schedule. 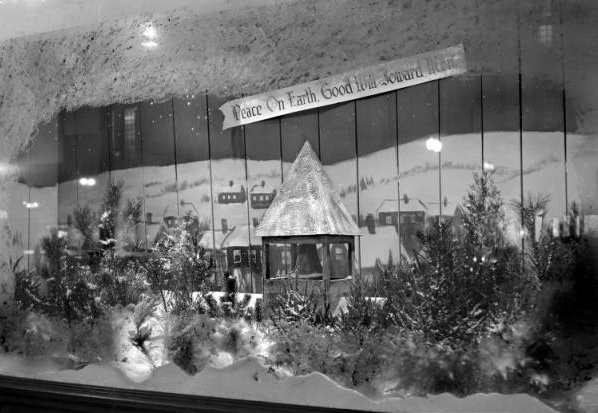 For many years, during one day in December, Ayres provided a telephone Santa service that allowed up to 6,000 children to talk to volunteer Santas from its staff.  Each Santa was given a set of jingle bells, but had to provide his own “HO HO HO!”

The Tea Room sparkled at Christmas with special trees. Families often celebrated the season by combining a meal at the Tea Room with their visit to Santa and a ride on the Santa Claus Express train.

Santa arrived by helicopter at the State Fairgrounds to the cheers of crowds of children and their families, who then followed him to Ayres’ Toyland.  There, thousands of children stood in line every year to tell Santa their wishes.  According to Suzanne Rollins, “my parents always said that the real Santa Claus was at the Downtown Ayres store.  Those mall Santas were just helpers.”  Santa’s house included a workshop with a dozen animated gnomes hard at work making toys.  Children who bought a 50 cent  ticket could deposit it in a little red box and receive a prize package “direct from Santa’s workshop”, delivered via a miniature toboggan slide.  Today, Santa still arrives by helicopter, but on the Indiana State Museum’s spacious front lawn!

The Santa Claus Express miniature train chugged through a winter wonderland of mountains, tunnels, an ice-covered pond, and animated animals to Santa’s house in the eighth floor auditorium.  20,000 to 30,000 children annually rode the train.  Wear, tear, and over 50 years of use finally took their toll, and the original train is now exhibited during the Indiana State Museum’s Celebration Crossing, while a new and larger copy continues to provide children with an unforgettable holiday experience.

The magic of historic L.S. Ayres Christmases is rekindled today in the recreated L.S. Ayres Tea Room™ at the Indiana State Museum. During the holiday season, the tea room is open by reservation for lunch, and visitors can also enjoy seeing the L.S. Ayres holiday windows of years past. For more information, visit indianamuseum.org or call 317.232.1637. 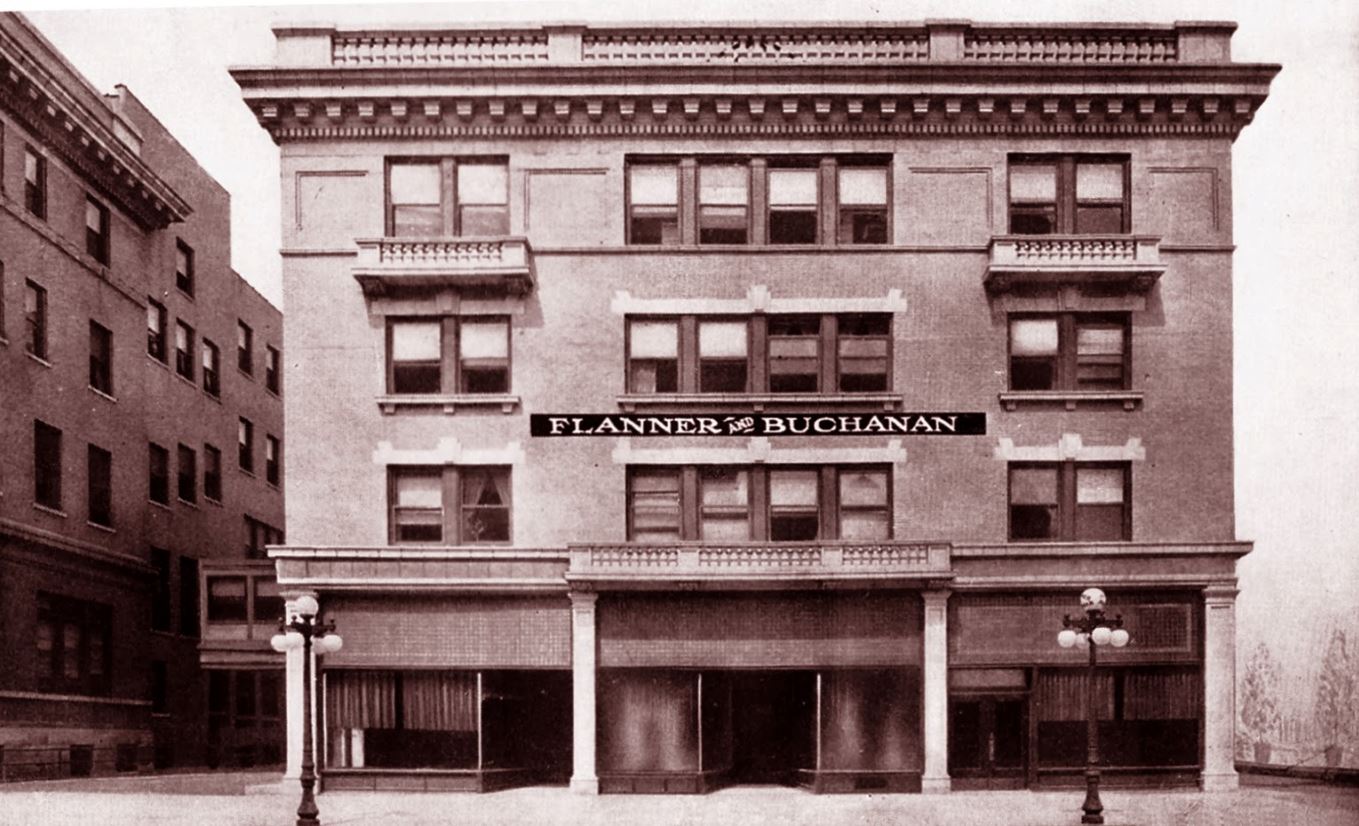 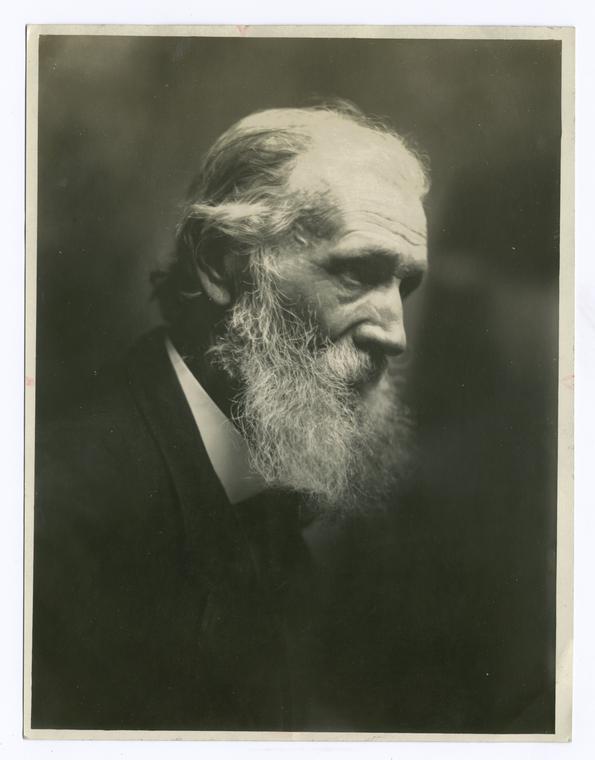