Yep, you read that right.

HI’s October ‘theme’ is “Beers, Booze & Bars,” so in doing a little research on the early temperance movement in Indianapolis, chanced upon the story of Dr. Cool in one of the best early Indianapolis reference books, Greater Indianapolis by Jacob Piatt Dunn. And because it’s what we do here, we offer the highlights:

“…But there is one thing more appalling than the drunkard who meets a sudden and shocking death, and that is the drunkard who drags out a miserable life. The first ‘frightful example’ in Indianapolis was Dr. Jonathan Cool. He came here in 1821, a talented young fellow, and better educated than the doctors that were here. He had graduated at Princeton…he was the first physician here to protest against the heroic doses of medicine–especially calomel–that were given in the early days…”

Another early Indianapolis doctor you may have heard of, Dr. Isaac Coe (the Columbia Club now sits on the site of Dr. Coe’s former home) was well known for using copious amounts of calomel to treat his patients, even inspiring a poem from Dr. Cool, of which, one verse survives: “Oh, Dr. Coe! Oh, Dr. Coe! /Why do you dose your patients so? /Slow to cure, and quick to kill;/There is no man alive can tell/ The awful power of calomel,/And dead men tell no tales.”

Ironic then, that Dr. Cool himself would slowly poison himself through copious imbibing, “…and in the course of a few years (he) became a hopeless sot. He retained some of his characteristics, however. He was always very polite, and very fond of quoting poetry, but an evident sense of shame made him shun the society of ladies, of which he had been fond; and and there were some ladies who would gladly have tried to reclaim him if they had had opportunity. ” 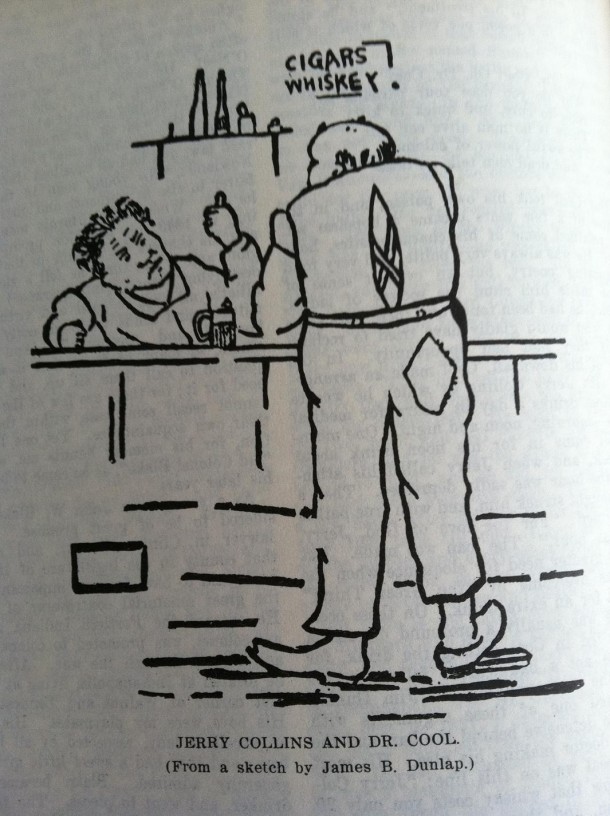 One of the arguments between Dr. Cool and Jerry Collins, with Jerry on the defensive, behind the bar and the pleading Dr. before him

It seems the city’s first whiskey shop was opened in the spring of 1822, by a man named Jerry Collins. “He had a barrel of whisky and some tobacco and segars.” We’ve all heard the anecdotal stories of a small town doctor being paid with eggs or the chicken that produced said eggs (still unsure which was first). In the case of an arrangement between purveyor of  whiskey, Collins, and Indianapolis doctor, Cool, the arrangement was: medical service in exchange for whiskey, thrice daily: morning, noon and night. But such arrangements are not always as simple and straightforward as they might, at first, appear.

In an episode that would qualify for the tabloid of the day (had there been one) this business arrangement lead to an exchange between these men, recorded for posterity:

“One morning Cool came in for his noon drink about 11 o’clock, and when Jerry called his attention to the hour, was sadly depressed. Then a happy thought struck him, and with true pathos he exclaimed: ‘For the love of God, Jerry, loan me an hour.’ The loan was made. But there was greater need for eloquence when the doctor was overcome by ‘the Great Thirst’ and called for an extra drink. On these occasions there was usually a profound discussion which resulted in Cool getting the drink, for Collins was not a bad-hearted fellow, in his way…His most effective appeal was on this line:  ‘Jerry Collins, you know that whisky costs you only 20 cents a gallon, and there are 56 drinks in a gallon. Will you refuse to relieve the sufferings of a fellow human-being when you can do it for less than two-fifths of a cent?'” (One must ask: was the typical ‘shot’ a 2.25+ ounce pour in the 1820’s?)

From John H. B. Nowland’s book “Early Reminiscences of Indianapolis,” Dr. Cool is also described as fond of quoting poetry, not only his own, and was always at the ready with a “clever quotation to illustrate any expression.” No wonder the ladies enjoyed his company–many a woman may be delightedly caught off-guard by an accomplished wordsmith.  The Cool Dr. was looked upon as one of the most gentlemanly drinking men in the pantheon of Indianapolis drinking men and never used vulgar language under any circumstance.  And while if he ever ‘borrowed’ anything, it was with the understanding that it would never to be returned, he valued his ‘word’ very highly, and on no occasion would he violate that word or deceive anyone, “no matter how much he needed a drink or anything else.”  If only we could swear as much today on behalf of all of our acquaintance, the sober or the drunk!

Nowland’s book asserted that the ‘old citizens’ of Indianapolis would undoubtedly recognize the following quote as one frequently spoken by Dr. Cool:

“Just like love is yonder rose,
Heavenly fragrance round it glows,
But underneath a briar grow–
Just like love.”

Presumably, these lines are the doctor’s own composition. Does this betray the doctor’s provocation for drink? Was he slighted in love? And was Lord Byron’s work known to the dear doctor? His quote brings Byron’s poem Don Juan to mind:

“Alas! The love of women! It is known to be a lovely and fearful thing;”

Do all poets, historically speaking, drink? And what of doctors? Have they a higher propensity to partake? All associations and questions brought to mind by this little tale of Dr. Cool…

May I suggest your next whiskey include a toast to long-forgotten, Dr. Cool–Indianapolis resident and whiskey lover from 1821-1840. Buried in Greenlawn Cemetery, whereabouts now, unknown. 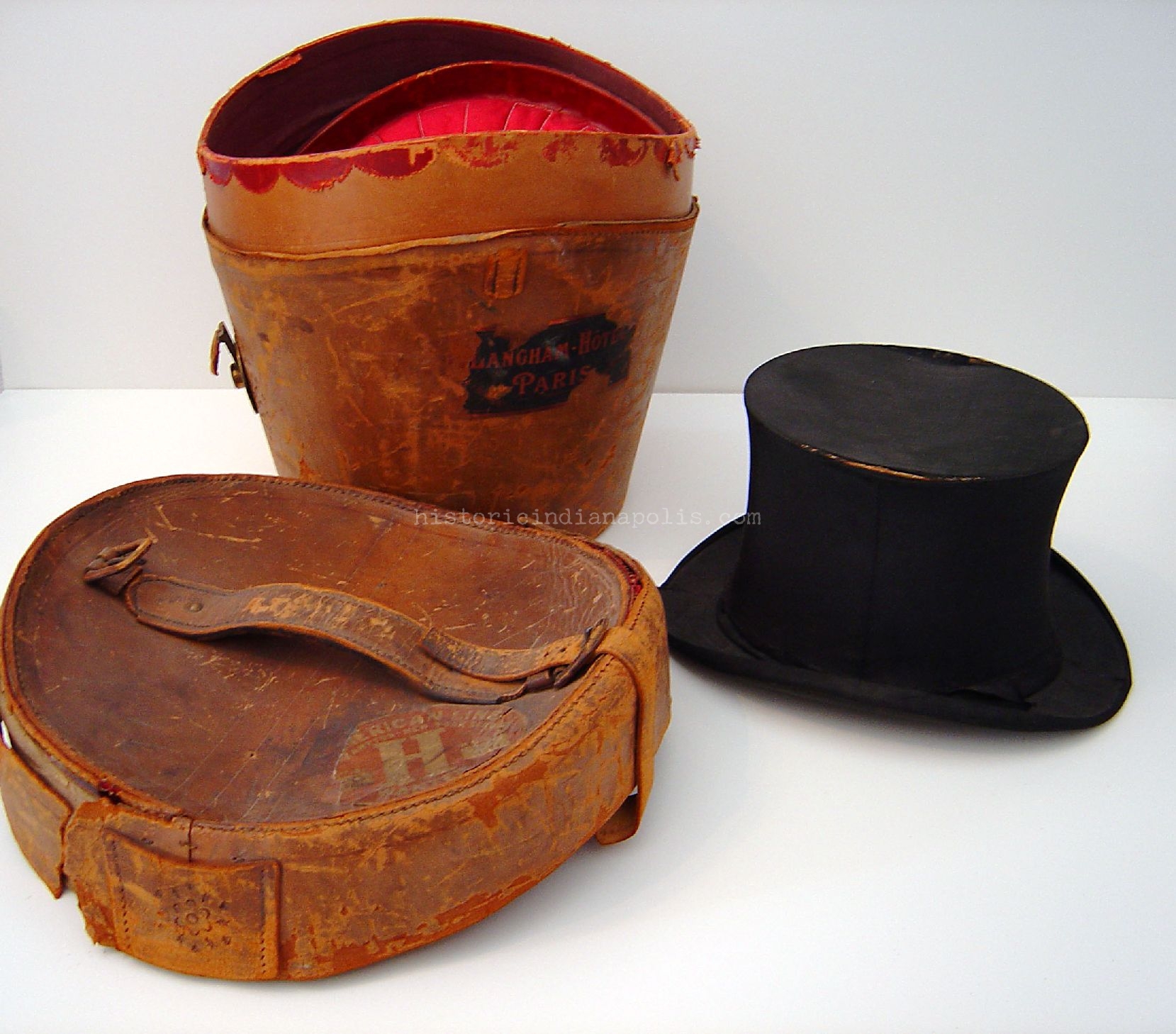