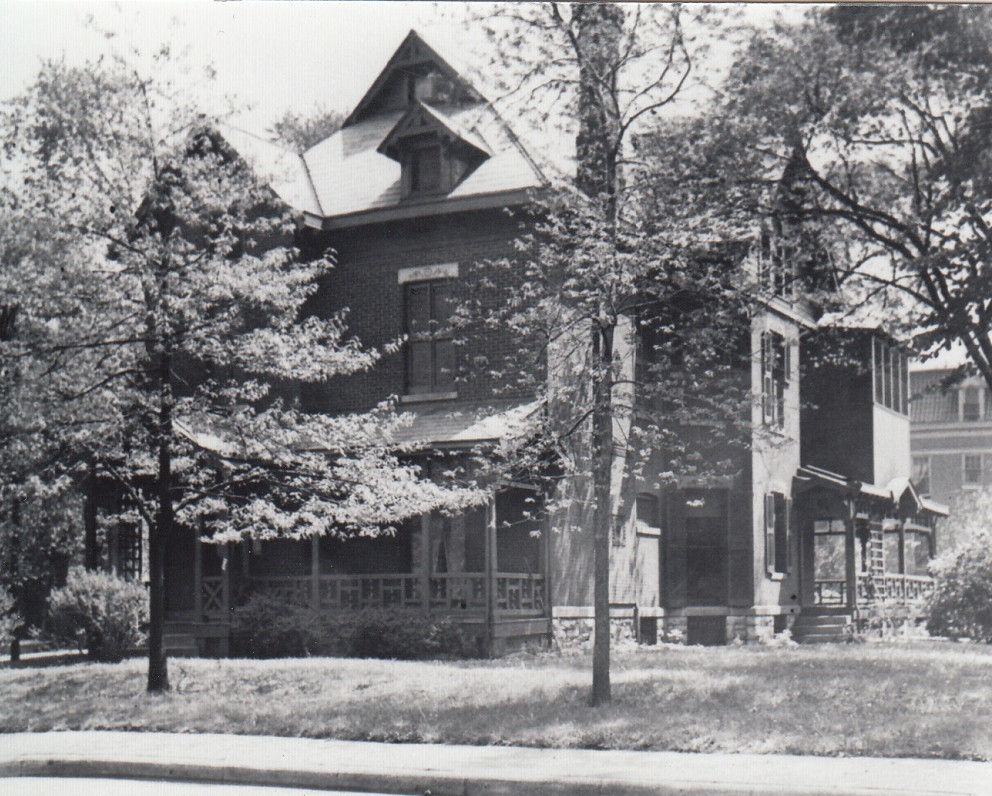 Home of Horace and Martha Nicholson McKay at Broadway & 13th and tomorrow’s Sunday Prayers, check back!

The Old Northside is bounded by the East side of Pennsylvania, 16th, Bellfontaine and I-65.

According to the Indianapolis Historic Preservation Commission’s “Old Northside Historic Area Preservation Plan,” two early neighborhoods combined into one to create the current Old Northside. “College Corners” was a residential area bounded by College Avenue on the east, Central Avenue to the west, Lincoln Avenue (now 15th Street) on the North and Christian Avenue (now 11th) on the south. The presence of the new Northwestern University (now Butler University) started life between what is now 13th and 14th Streets on College Avenue, hence, earning the area the name “College Corners.” The other part of the neighborhood was essentially spill-over to the east from the first wave of mansions and fine homes of the well-to-do on Meridian—including the famed “Gold Coast” stretch of Delaware (south of 16th) that included the Bates-Allen-Parry-McGowan Mansion as well as the Schmidt-Schaf Home (now The Propylaeum).  After World War I, there was little new development in the area. And as any Sociology 101 class will teach you, there comes a point where the wealthy want to move farther afield and away from the center of the city, until the process begins again, as it did in the Old Northside in the 1970s.

The land upon which the university was founded had been carved from a larger farm between Central Avenue and the Monon trail and from 11th to 16th Streets belonging to Ovid Butler, which he donated to the school.  Butler’s one-time home still remains on the northwest corner of Park and 13th Streets—in the heart of his once vast land holdings.  Though the Northwestern Christian University moved to a larger campus in Irvington in 1875, its presence in what is now “Old Northside” lived on. The main college building repurposed (until it was razed in late 1910), and a namesake club were the only notable remnants left in the wake of the college.

One time president of College Corner Club who lived at what is now 1340 N. Park Avenue and was a one-time law partner of Benjamin Harrison, when the firm name was Harrison, Miller, Winters & Elam. He was elected prosecuting attorney of Marion County in 1878 and later served as police commissioner from 1887 to 1891.

In the fall of 1872, Indianapolis school teachers Mary E. Nicholson and Mary Colgan organized the “College Corner Club,” innovative in its time for allowing both men and women to belong. The club was a literary society, including individuals “not only of widely differing views but those of different pursuits as well—judges, lawyers, physicians, men of business, women with the cares of family, and from time to time a good representation of America’s nobility—teachers in the public schools.” (Martha Nicholson McKay, Literary Clubs of Indiana, 1894) 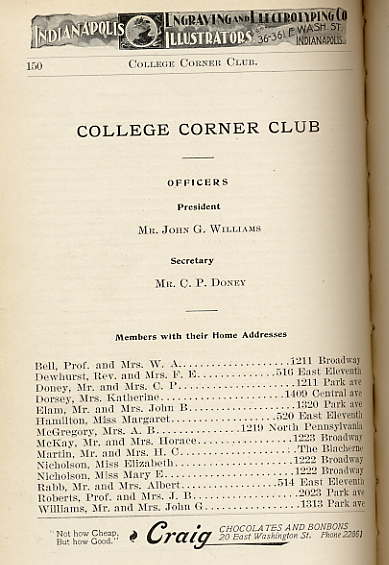 It is not known how long the club remained in operation, but certainly through 1910. In the front section of some city directories, clubs were listed. The 1892 City Directory lists Elizabeth Nicholson as President and J. B. Roberts as secretary; in 1893 John B. Elam is listed as President and again, Roberts as secretary. In 1895, only Roberts is listed as secretary and in 1897 and 1904 city directories, the club is not mentioned. In the 1899 Blue Book, the Club is listed with a limited number of members and though it is not in each subsequent Blue Book, it does appear amongst the list of Club names in the 1910 Blue Book. 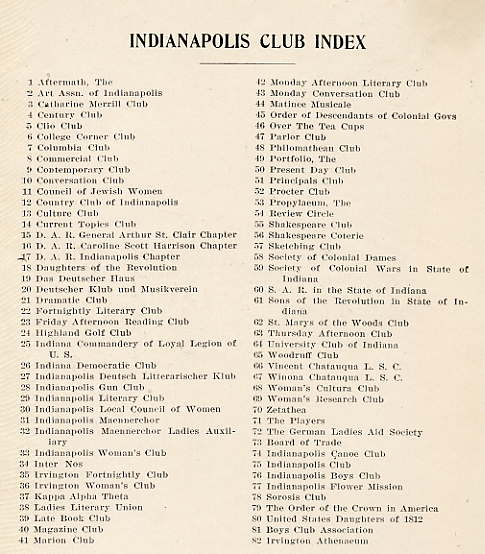 On April 3, 1897, The Indiana Woman mentions: “The College Corner Club, is one of the oldest of Indianapolis’ clubs. It is delightfully informal in its management, having no dues, no printed programs and no formalities of any sort. It is composed of both men and women, and the subjects of the day are discussed in a delightfully free and easy manner.”

From History Indiana Federation of Clubs:

“Miss Elizabeth Nicholson (to whom is due the honor of having brought to a culmination the Union of Literary Clubs) was a Quaker and an advocate of woman suffrage, who believed in the equality of the sexes in all the relations of life. Moreover, she had for years been a member of a club composed of both men and women, the College Corner Club of Indianapolis, (believed to be the first mixed club in the State, 1872) and its meetings were notable for free discussion, literary flavor and social charm. Among its members were judges, lawyers, ministers, physicians, teachers in grade and high schools and mothers of families. It is said David Starr Jordan ‘took his first flight as a poet when a member of this club.’ Miss Nicholson knew of a few mixed clubs in other towns and heard only golden opinions expressed regarding them. What more natural than that the new Union should admit not only women’s clubs but clubs of men and also mixed clubs? The idea seems to have appealed strongly to those in charge of launching the new venture. Women’s clubs largely predominated, but the College Corner Club was older than any club in the new Union, and it was freely prophesied that the mixed club was to be the club of the future. The delegates from the College Corner Club to the Richmond Convention (first convention of the Union, 1890) were Captain Horace McKay and his wife, Martha Nicholson McKay, sister of Miss Nicholson and founder of The Woman’s Club, Indianapolis. Both took part in the discussions, a pleasing object lesson that made an impression. So the Indiana Union of Literary Clubs made no sex discrimination, a fact destined to cause embarrassment and much unhappiness later on.”

The members of this club were by all accounts, progressive, artistic and well educated. In fact, I’d love to belong to a club like this now… 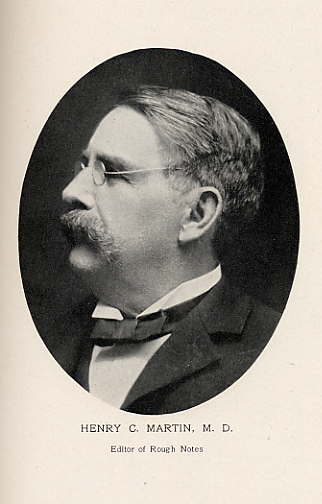 Another member of the College Corner Club who lived at The Blacherne. 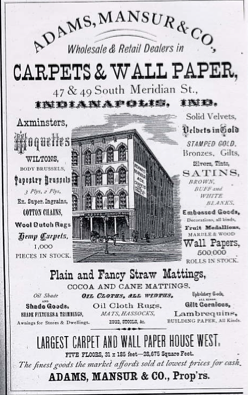