While doing research for last week’s article about the remnants of the Bacon Cemetery at Kessler and Keystone, I was scanning through Google Maps to get a bird’s eye view of the intersection. A search for “Kessler” inadvertently highlighted the boundaries of the Meridian-Kessler neighborhood on the satellite image, but also a small bit of land, a few square blocks in size, smack dab in the middle of the notable Meridian-Kessler. And so, because it also has a modest topical tie-in to the Indiana State Fair going on right now, today, a quick look at the tiny neighborhood called “Oliver Johnson’s Woods”. 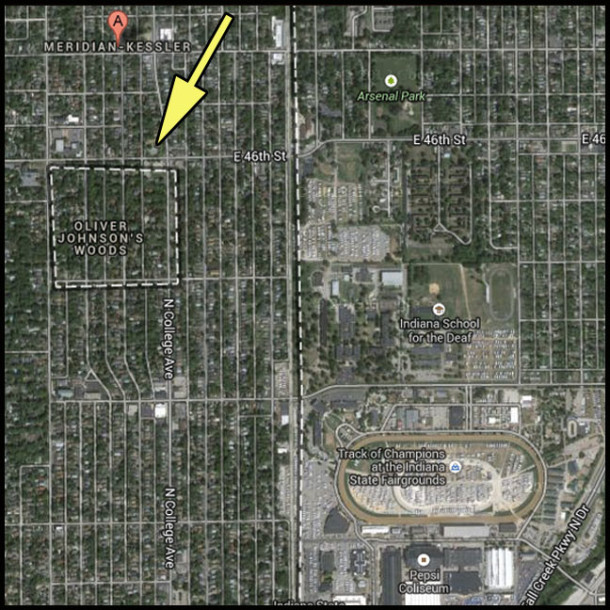 Well before vendors set up shop to sell cheese curds and deep fried butter, a pioneering family by the name of Johnson occupied much of what is now the Indiana State Fairgrounds. 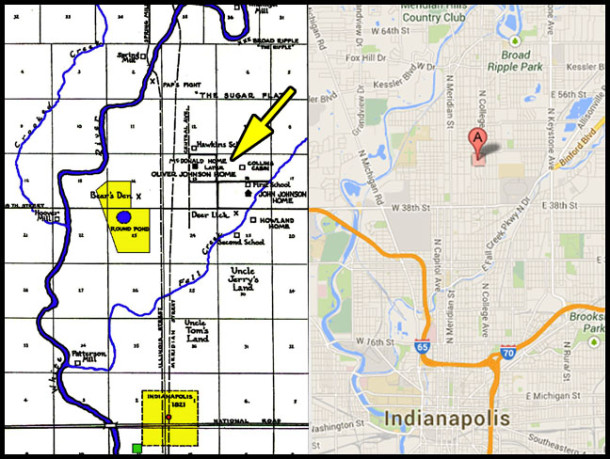 Left: A map of the Johnson’s Indianapolis circa 1821. The arrow points to the Johnson family farm while the yellow plot of land to the west show the future site of Crown Hill Cemetery. (from the Crown Hill Heritage Foundation) Right: For comparison, a modern map of Indy, Oliver Johnson’s Woods highlighted by the marker. (Google Maps)

A settler from Virginia by way of Kentucky, Jeremiah Johnson brought his family to central Indiana in 1821, not long after the state legislature voted to relocate the state capitol from Corydon in southern Indiana to a swampy square mile of land near the junction of the White River and Fall Creek. Johnson and three of his sons claimed an 80 acre plot of land two miles north of the fledgling capitol city, along the western bank of Fall Creek. The following year, after land was cleared, cabins were built and corn planted, Johnson and his sons moved the rest of their family to their homestead, including his one year old grandson, Oliver. 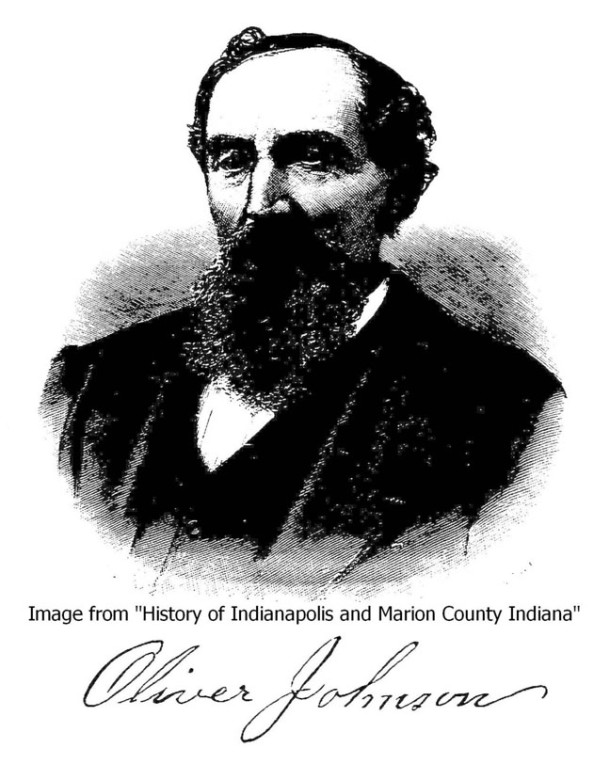 Oliver Johnson’s adventures, growing up in the wilderness that was once 38th and Fall Creek, is retold by his grandson Howard Johnson in the 1951 Indiana Historical Society publication “A Home in the Woods”, a book I highly recommend for parent or teachers of small children to learn of pioneer Indianapolis. It’s short, it’s sweet; two things history books rarely are and I’ll post an link to an online copy of it at the bottom of this article. However, for today’s purposes, let’s jump ahead to Oliver Johnson, all grown up.

A 25 year old Oliver purchased his own plot of land a short distance west of his father’s property in 1846 and later built a traditional five-bay farmhouse for his family in 1862. Oliver farmed his land as Indianapolis quickly grew outward from its one square mile beginnings. By the turn of the century, the aging farmer saw opportunity in the city’s northward sprawl. After all, his father’s property, just east of his own, had just recently been repurposed. In 1892 what was once Jeremiah Johnson’s homestead hosted its first fair as the new Indiana State Fairgrounds. An enterprising Oliver and sons platted (subdivided) the property in 1909, selling a portion of it to the city for an interurban rail-line linking Indianapolis and the Village of Broad Ripple down College Ave. Oliver’s farmhouse, which had originally come to face Central Ave. was purchased by a new owner and moved to face Park Ave. where it sits today. 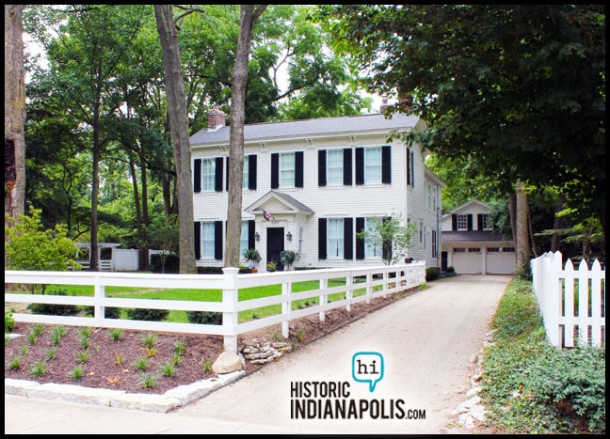 Oliver Johnson’s plots were quickly scooped up by a wide variety of successful immigrants, business owners and auto industry leaders who had grown prosperous as the city had grown. The huge variety of houses constructed in such a small area is a salve for eyes sore of cookie-cutter housing divisions that pepper the fringes of the city and is a walking history of early 20th century residential architecture, a definite must see on the long list of historic neighborhoods throughout Indianapolis. 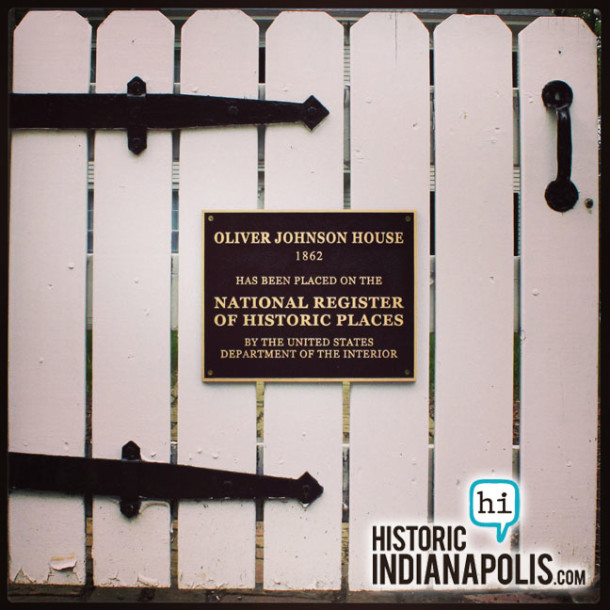 A Home in the Woods – Howard Johnson

(Also,this has little to do with this article other then I doubled checked on the name origin of Johnson County to see if these Johnsons were involved. They’re not. Johnson County is named for Indiana Supreme Court Judge John Johnson. Here’s a list of why each county is named what it is. It was entertaining for me, but then, I’m not normal.) 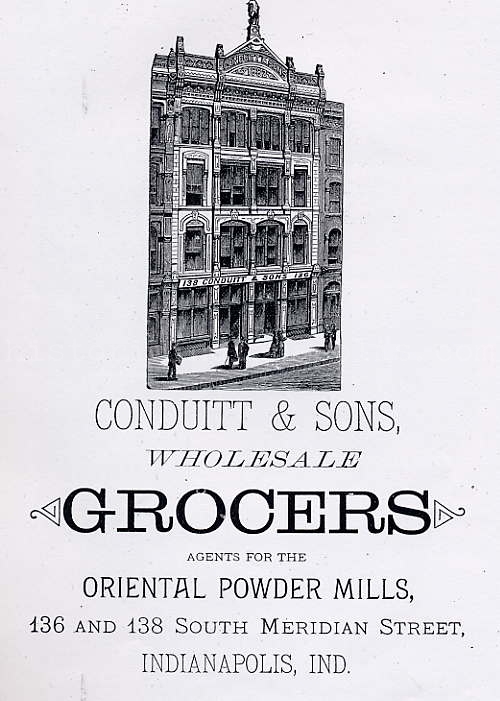 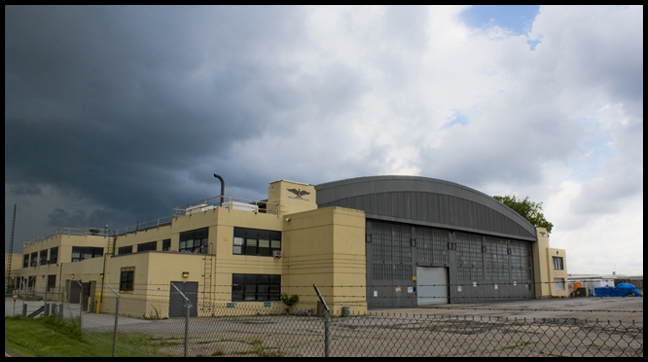 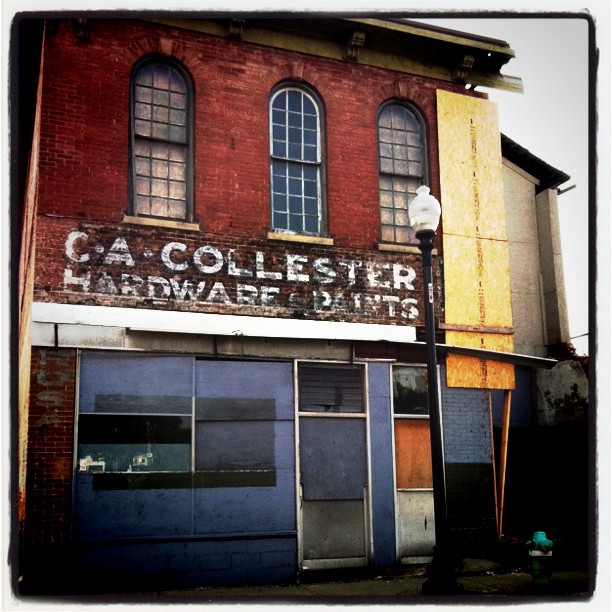