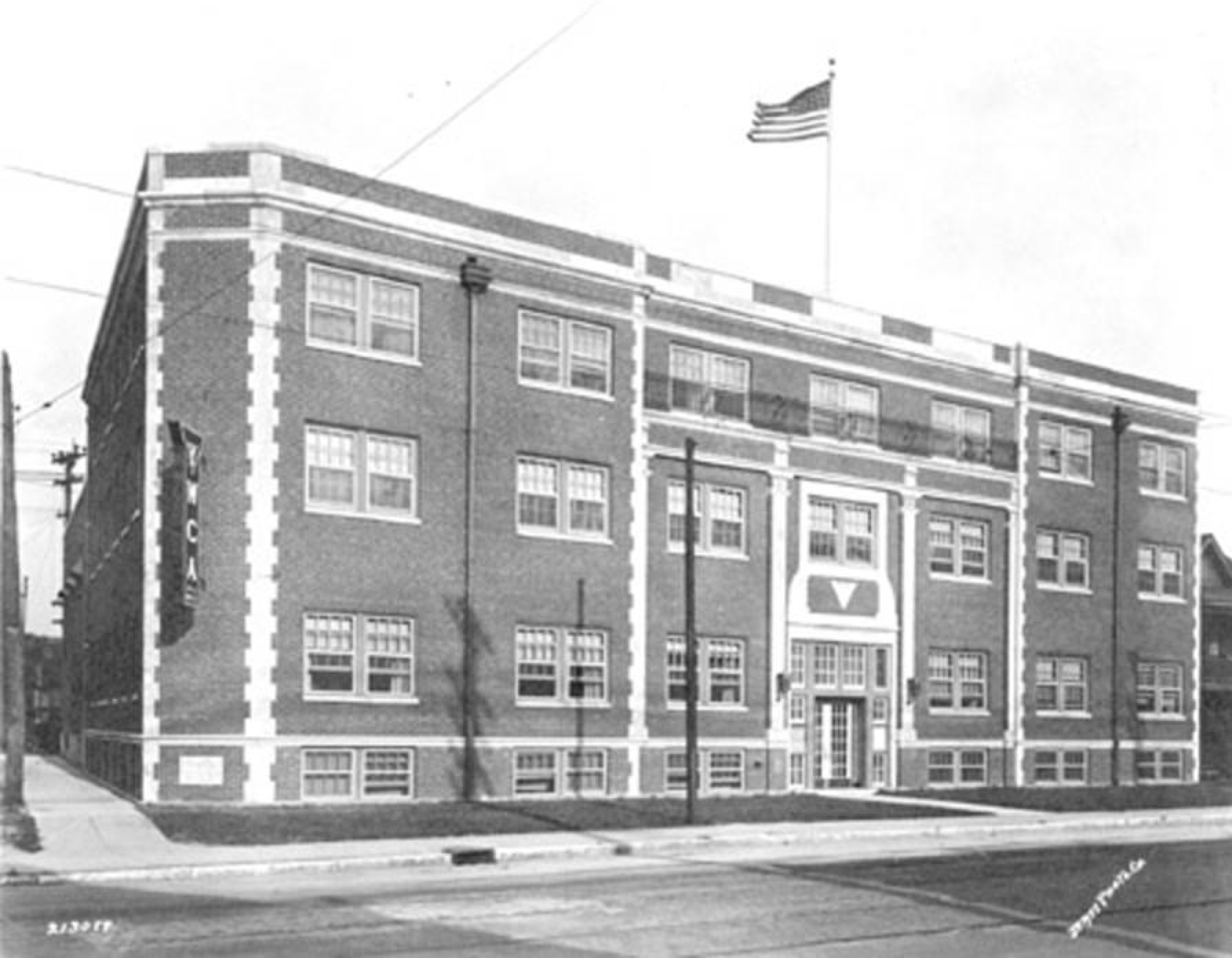 Anyone who has ever gotten anywhere in life has had help. Whether family, friends, teachers, community members– no one is completely self-made. What a noble endeavor to provide a leg up to those whose circumstances are more challenged. Providing community, shelter and solace are among the founding principles of the Young Women’s Christian Association. And yet, it took decades after the inception of the organization to make it to Indianapolis. Even longer for the young ladies of the black community.

The earliest mention of forming a Y. W. C. A. branch for black women in Indianapolis was in March 1906. Considering the glacial pace at which programs or amenities for whites filtered into the black community, this city’s record there was certainly better than some other places. But still, not fast enough. The first talk of a white Y. W. C. A. for Indianapolis began 11 years earlier, in April 1895.

However, the chatter for a black branch that began in 1906 lacked sufficient community (read: financial) support and the idea faltered until late 1914 when Mrs. Minnie Whitaker rekindled the movement. A committee of five women started working towards a provisional organization. Madam C. J. Walker, Mrs. Carr Settles, Mrs. Emma DaVale and Miss Alice Kelley joined committee chair, Mrs. Whitaker, on the committee, determined to have a branch for the local ladies of color. 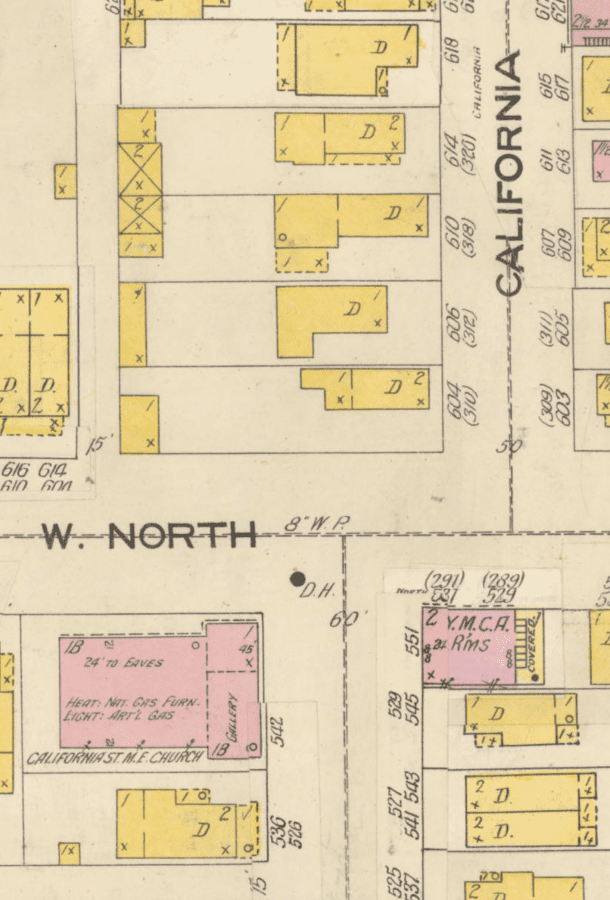 The effort slowly moved along for many months, running early meetings out of Madam Walker’s assembly hall, at her business/ home at 640 N. West Street. Eventually, the provisional Y. W. C. A. assumed the space belonging to the “colored” Y. M. C. A. at the southeast corner of North and California streets, after the men’s organization secured a new permanent location at 450 North Senate. The ladies lingered on California Street until 1921-1922 when they relocated to 1202 North West Street.

In 1923, however, things changed. Momentum picked up. And that was due to the arrival of a former field secretary for the southwest district of the Y. W. C. A. who had also organized other “colored” branches in St. Louis and St. Joseph, Missouri; Kansas City, Kansas; Nashville, Knoxville and Chattanooga, Tennessee; and Little Rock, Arkansas. Miss May Belcher oversaw this reinvigorated branch from January 1923 until she retired in the fall of 1944. The group moved to a two-story brick building at 601 North West Street until they moved to their final location at the corner of Walnut and West streets at 653 North West Street. Construction started in 1928 and finished in 1929.

In the spring of 1927, the community at large got serious about fundraising and increasing membership for the Phyllis Wheatley branch of the Y. W. C. A. Numerous articles were published in local newspapers making the case of the value of the organization to the black community and the Indianapolis community at large. One appeal to the public said (in part):

“What the Y. W. C. A. for white girls has done in Indianapolis shows what can be done in providing similar accommodations for colored girls. It gives them a meeting place where they are under the best influences, where they may find pleasant entertainment, an opportunity for making friends and or gaining instruction in many special lines and may enjoy the desirable feeling that they are a part of a large and useful institution and have a helpful friend….It is a tragedy when these young people lack the guidance and protection outside of home and school that are open to white children. The city suffered from it as well as the children themselves…white citizens owe it to their city and themselves to give liberal help. No doubt they will do so.” 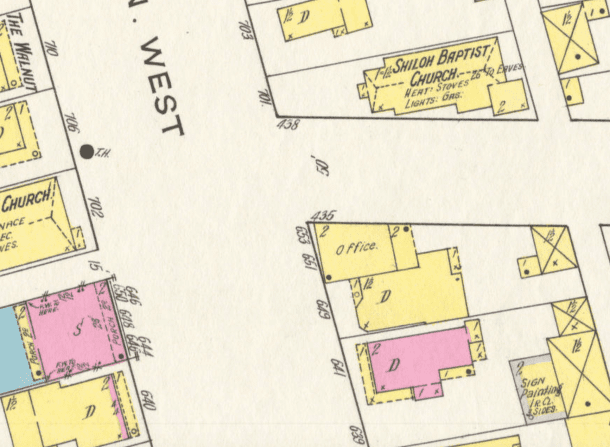 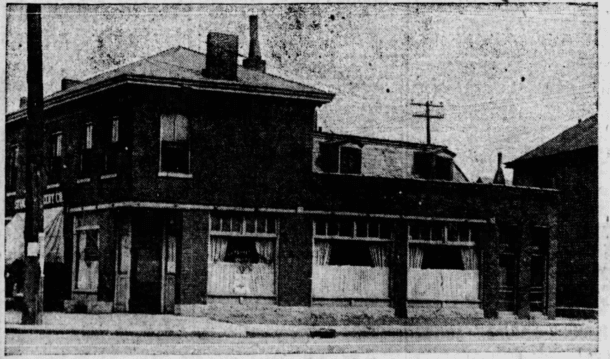 The building that preceded the new 1929 Phyllis Wheatley Branch, represented in 1915 Sanborn map above.

Around the same time as the fundraising efforts, architectural plans for the three-story building were ready for inspection, designed by Fermor S. Cannon. Cannon was a local architect behind other places you can still see today: Hinkle Fieldhouse, Woodfuff Place Baptist Church, and the wrought iron gates at Oldfields among numerous other projects. 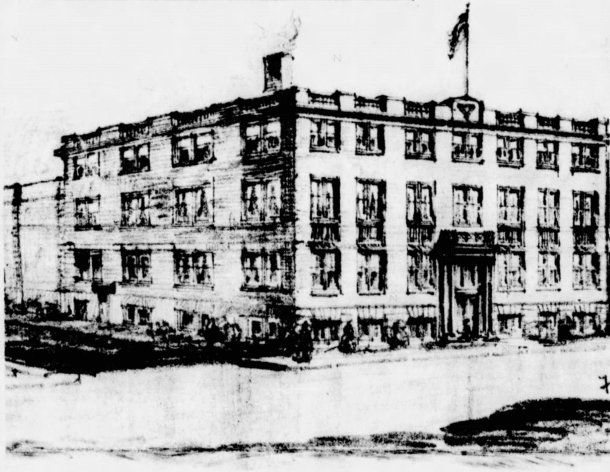 The groundbreaking for the new took place on Sunday, April 29, 1928 at the corner of Walnut and West streets, yet the cornerstone wasn’t placed until October 28, 1928. The cornerstone ceremonies and event started at the new Madam Walker Theatre, followed by an entourage of approximately 1000, accompanied by jubilant tunes of the Y. M. C. A. band, over to the new building site for items to be placed and sealed in the cornerstone. The building was completed in August 1929, and the formal opening took place October 6-12, 1929. 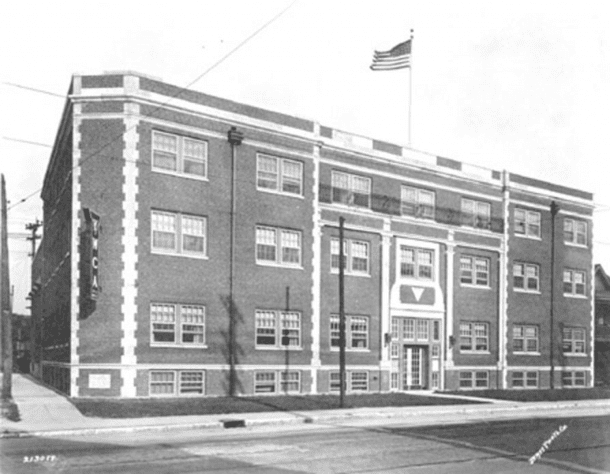 The structure was composed of brick and reinforced concrete and on the first floor housed: the executive and general offices, library, gym, lobby and girls parlor. The second floor had more offices, the music hall, club and class rooms. The third floor held the 31 bedrooms, laundry, showers and sitting room. In the basement, the pool, showers, dressing room, tea room and storage rooms were all to be found. The walls were ivory plaster and the wood trim and doors were dark walnut. 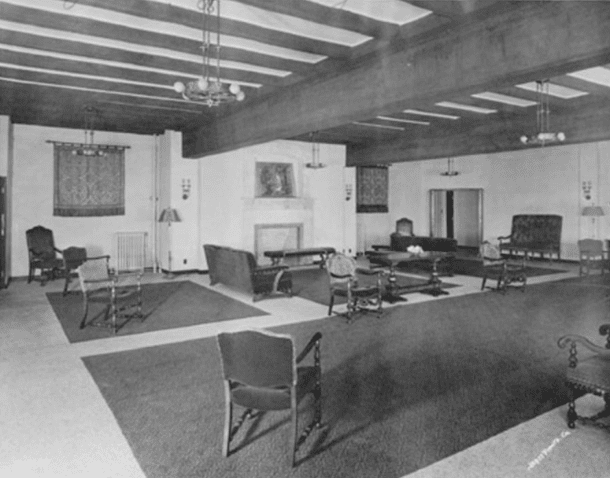 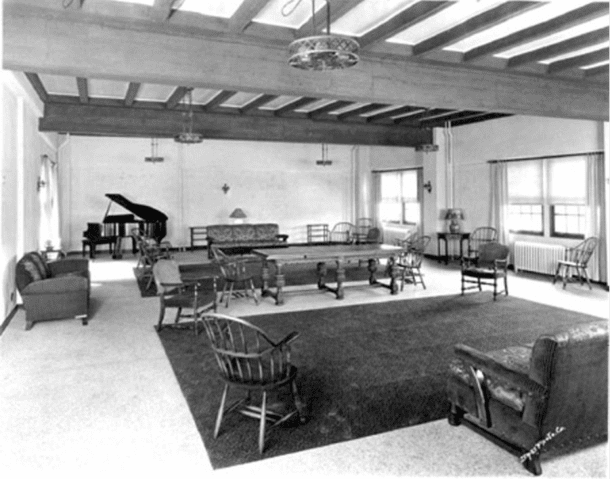 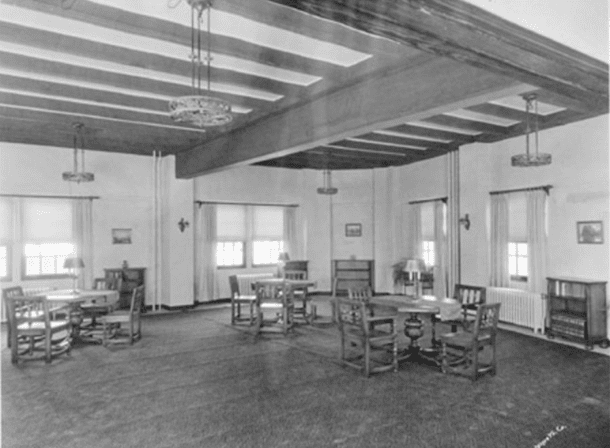 The first young lady to secure a room here as a permanent resident was Miss Frances Williams, the 17-year-old daughter of Renzil Williams, a fireman at Station One. 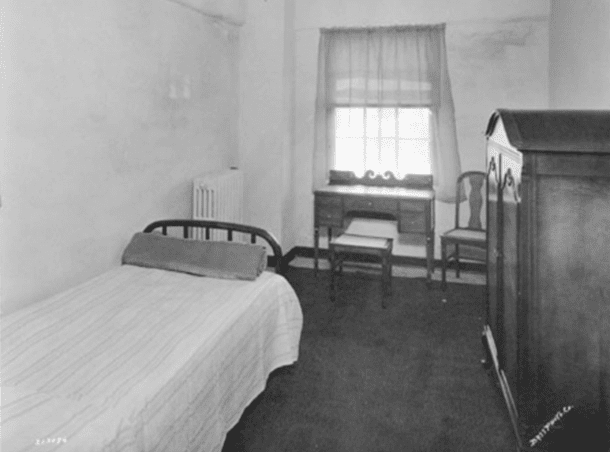 The Wheatley Y was a place of community, growth and safety for the city’s black women for 30 years, until it merged with the Central (read: white) branch at 329 North Pennsylvania Street. The building was closed   closed on September 30, 1959, and sold to the Prince Hall Masonic Temple. The Masons managed to hang on there for a number of years, until the widening of West Street forced them out in September 1983, at the same time numerous other buildings were destroyed.

It would be impossible to name all the people it took to make this branch a reality–both black and white citizens of the city. Equally impossible to quantify the difference this place made in the lives of the young ladies it served.

Who knew this place or had relatives who used it? We’d love to hear your memories in the comments section. 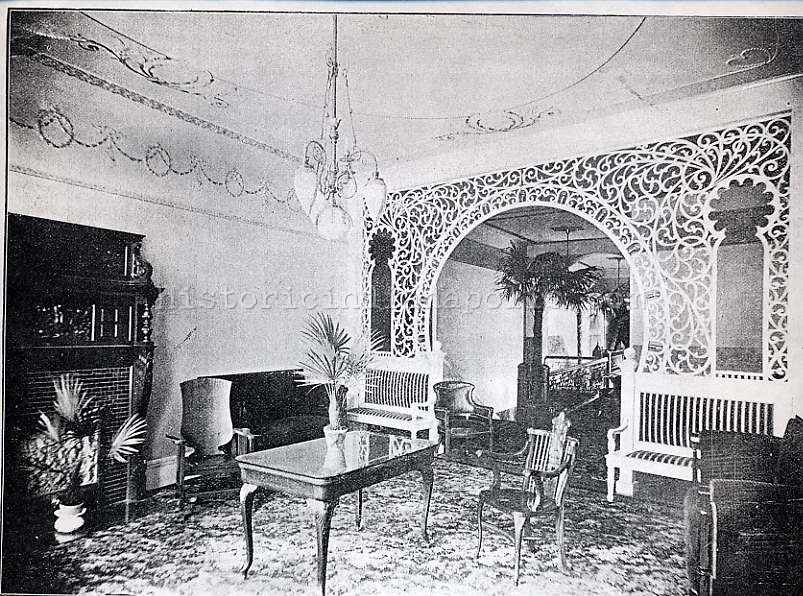 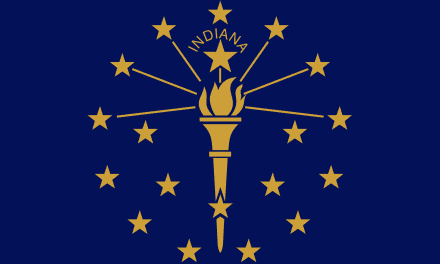 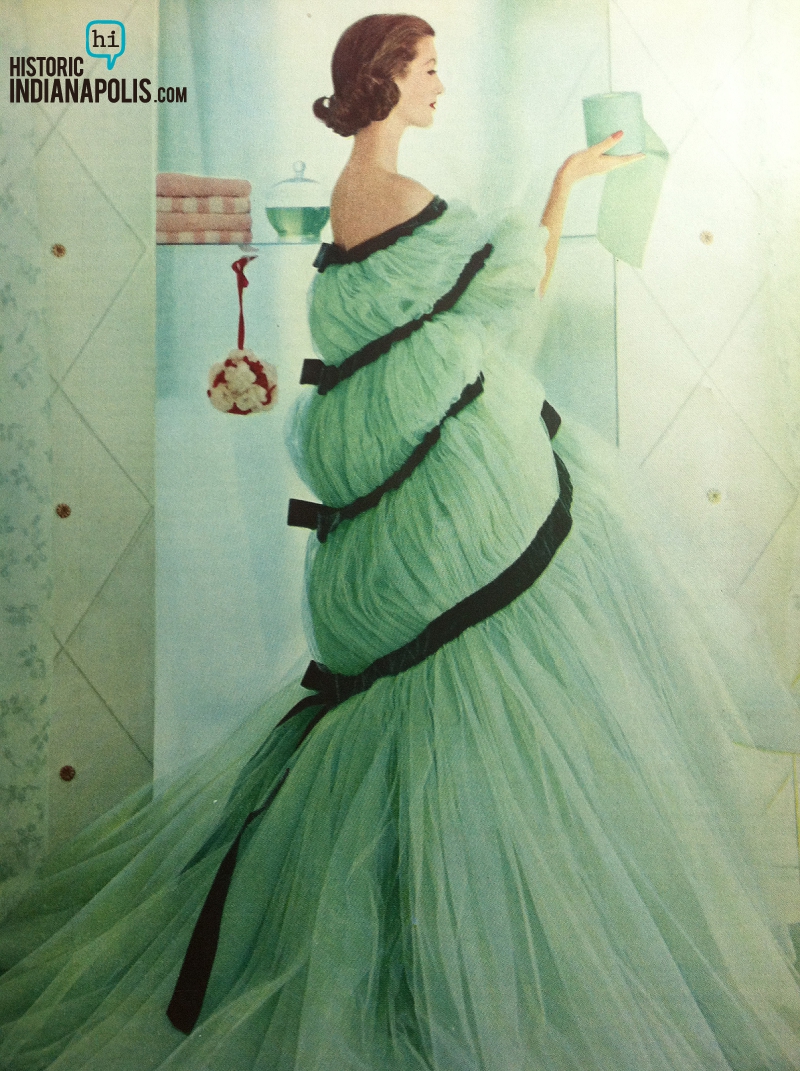 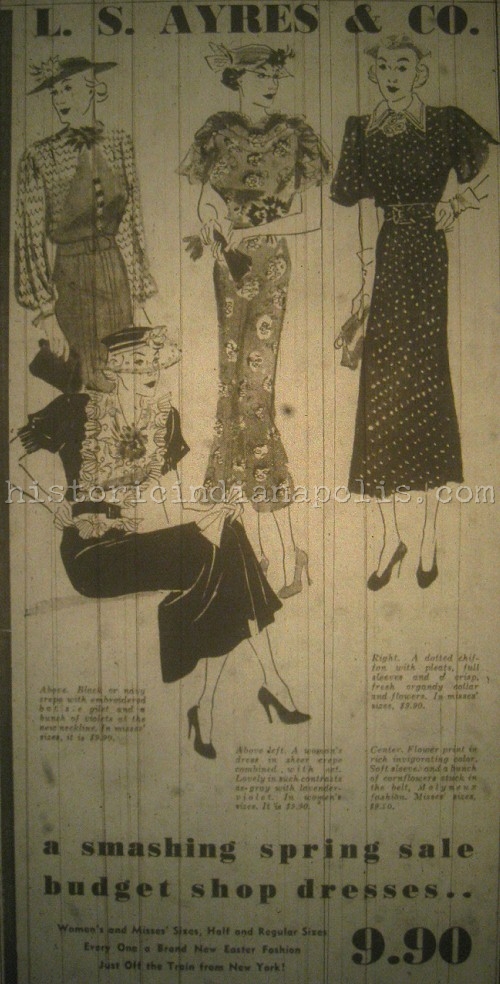