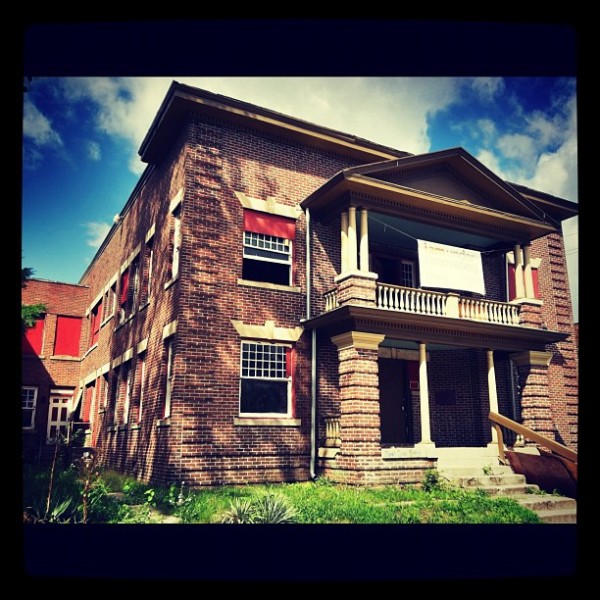 The old Normandy Apartments at the corner of 17th and Alabama streets are being renovated into two luxury condos. (2012 photo by Tiffany Benedict Berkson)

“Luxurious,” “high-end” and “competitive” were not words used to describe the apartment building at 17th and Alabama streets. Instead, the phrases associated with it in a Sept. 2012 “Sunday Prayers” post were “vacant,” “in need of money” and “no parking available.” However, the building—known as the Normandy—was also described as “having potential.”

Five months later, “potential” has blossomed, giving the building a new life and a new name. The Normandy, which first contained four apartments, but was later divided into 10, will become the Redstone Condos, a two-unit building. The luxury condos will feature all the modern “bells and whistles,” including an attached two-car parking garage for each unit. However, making exterior changes to a structure located in a historical district—in this case, Herron-Morton—was not without its challenges.

“It took well over a year to obtain every needed COA, neighborhood approval and permit to get this project started,” said Jacob Griffin, project manager for Redstone Condos and COO of Indreno Development Group. “Our biggest challenge was gaining approval to build [the garages] into the building.” 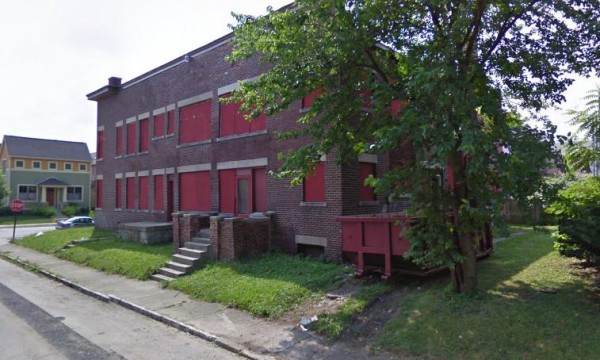 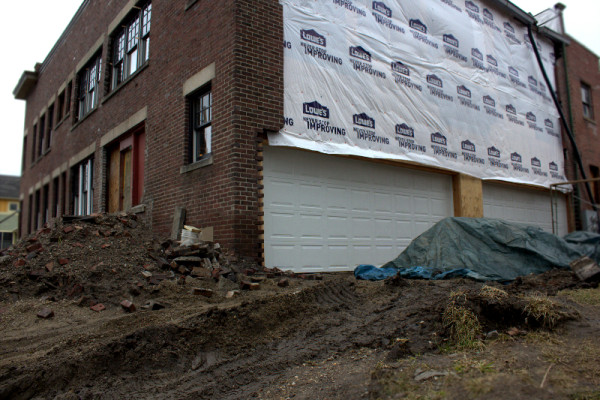 The approval process can be tedious, confusing or frustrating, especially for a property owner who is unfamiliar with the neighborhood or its regulations. However, as Tiffany Benedict Berkson said in September, “[The rules] protect the integrity of the buildings and the fabric of the neighborhood and city.” Historically, Herron-Morton was a desirable neighborhood, one for successful businessmen, for leaders. During the 1930s, however, the neighborhood lost a lot of its appeal, as the homes of the elite were transformed into multiple-family dwellings. Other homes were left unattended and forgotten, eventually erased from existence between the years 1950-1970. Even now, decades later, their absence is felt in the wide, grassy lots that pepper Talbott and Delaware. However, the neighborhood has embraced rehabilitation in recent years. Homes have been gutted and refinished, their ancient paint peeled off and replaced with various yellows, teals, pinks and burgundies. It’s a neighborhood in which its residents take pride, and with the Herron-Morton Place Foundation, the New Tinker Street Committee, the Indianapolis Historic Preservation Commission (IHPC) and dedicated renovators like Indreno and R&B Architects, the area could see even more of a revival. The only requirements? Improve the quality of the neighborhood and raise the value of property by respecting history. 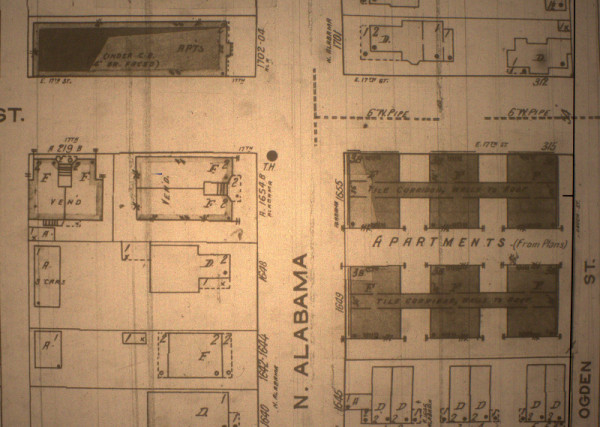 The 1915 Sanborn map illustrates the intersection of 17th and Alabama streets. The map indicates that the Normandy had far fewer windows in the past. (Sanborn maps available through the Indiana State Library) 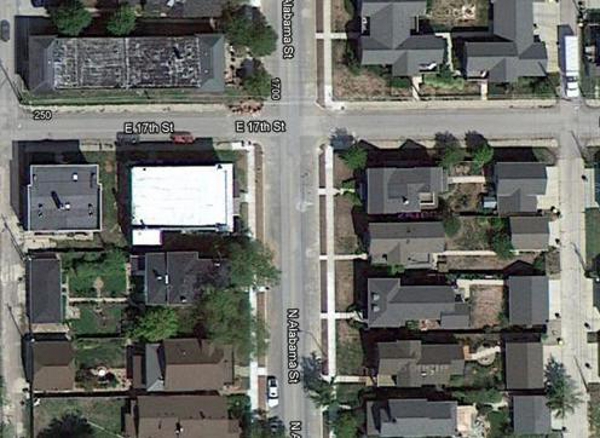 17th and Alabama, as seen in 2013. Here, the small addition constructed 15 years after the Normandy was originally built is seen. (© 2013 Google)

Concerning the Normandy, history is layered. It was constructed sometime in the early 1900s, and newspaper advertisements frequently called attention to its available rooms. Though many of the advertisements appeared in 1912 to 1918, the earliest one I found was published Sunday, Dec. 5, 1909, in The Indianapolis Star. The description, though short, indicates that the apartments were spacious and modernized: “Seventeenth and Alabama streets; new; city heat; five rooms and bath; strictly modern; large, outside rooms; $40.” In fact, no other apartment listed that day was more expensive than the Normandy; the next-closest, at $35, was on Central Avenue. 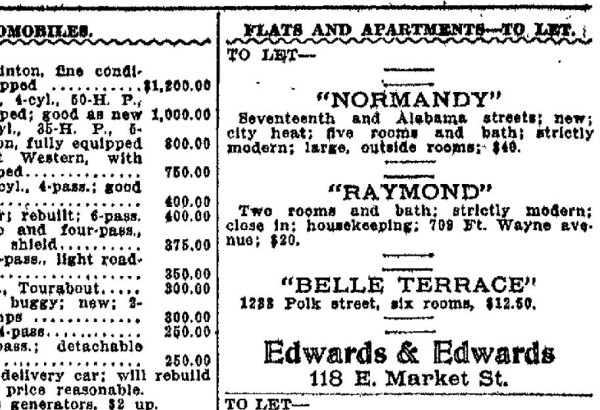 A Dec. 5, 1909 advertisement published in The Indianapolis Star lists rooms “for let” at the Normandy. (courtesy Newspaper Archive)

The published offers must’ve worked, for the building was quickly occupied. Some of the early residents of the Normandy were Nellie Hamlin (who may have been a stenographer for the Indianapolis News); Elmer Rork, assistant superintendant of Prest-O-Lite, Co.; Charles Tuttle and Carl Lucas. Each resided at the property in the 1910s. Later, between 1935 and 1939, the Normandy was further divided, and the number of units expanded from four to nine. By the mid-1950s, however, the building had a total of 10 units. And, to add to the disarray, an addition to the south side of the building was constructed fifteen years after the Normandy’s initial “opening.” As a result, the interior construction was a bit chaotic.

“There were no distinct separations between units,” said Griffin. “It was just two floors with hallways and doors. The walls that created each room within the building were only eight to nine feet tall, so they did not touch the actual ceiling.” 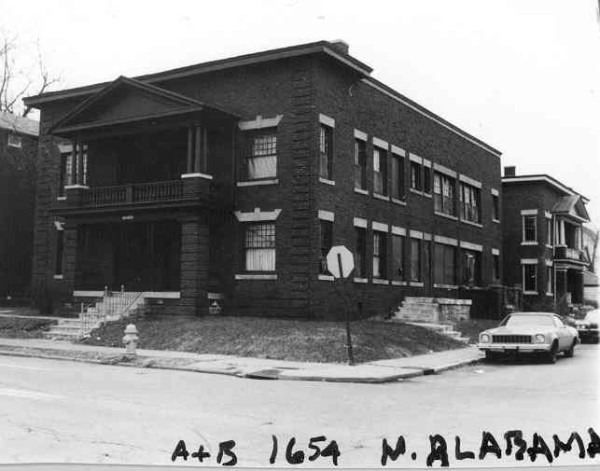 The Normandy, as seen in 1986. (photo courtesy Brent Mather) 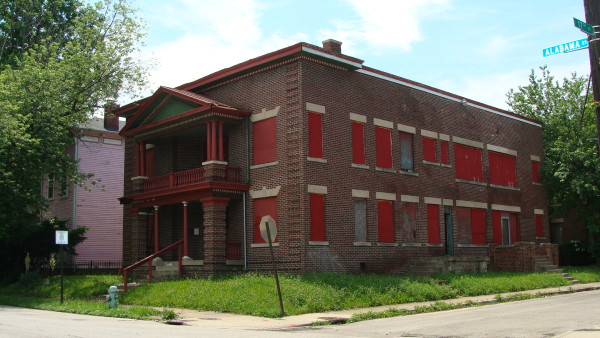 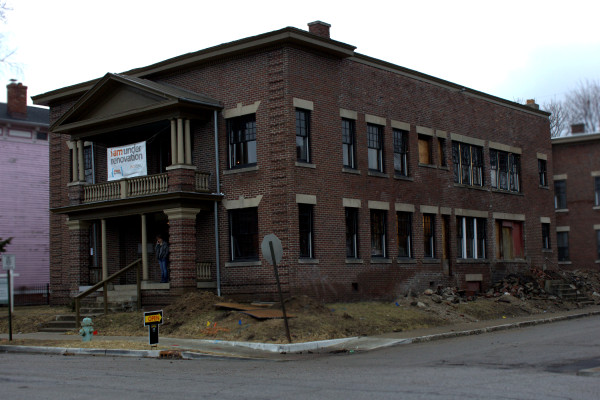 Brent Mather, of R&B Architects, added that there were few things within the interior that could be salvaged. “The only things we were able to save were in the entryway—the stairwell and the tile.” However, the renovators have been working closely with the IHPC to preserve the building in other ways. Mather, the interior architect, said only two new windows needed purchased for the entire property. “The original sills and the original sashes are still here,” he said. “We were glad to be able to use those.” Mather was also excited to show off the exposed brick in each apartment. “It was originally a fire wall,” he explained. “A partition between the two halves of the building, for protection. But the pattern is really interesting.” 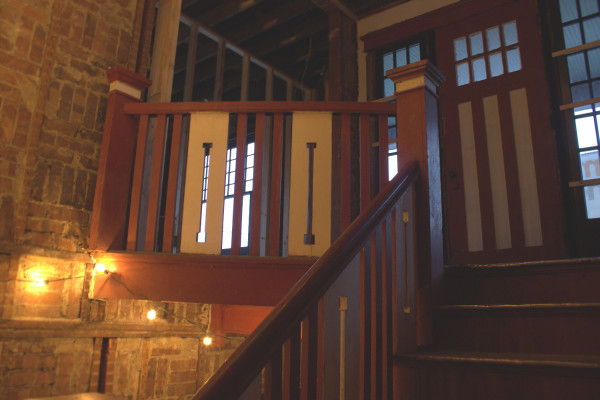 The original stairwell will remain intact, and will be included within the north condo. The north condo will have access to the second-floor balcony through the door pictured. (photo by Dawn Olsen) 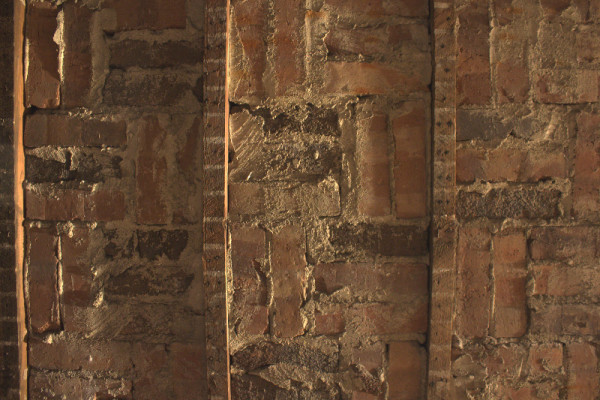 The original fire wall that divided the property in half will remain exposed in the new condos. (photo by Dawn Olsen)

In addition to the exposed brick, the condos will feature a plethora of windows, as well as the original fireplaces. Buyers will be able to pull their cars into the garage and step into a mudroom before entering the rest of the condo. The original stairwell will be allocated to the north condo, while the south condo will have a side porch and a glass-railing staircase. While the units are similar, Mather said he and Griffin wanted buyers to have options. “You can take this wall down,” he said, pointing to some framing directly in front of me. “There’s only one wire you’ll have to remove before doing so. That way, if someone wants, they can have this open area at the top of the stairs, rather than a third bedroom.”

Two bedrooms or three bedrooms. Upstairs porch or side entry. The residents of Redstone Condos will have options. Buyers will have the opportunity to choose between a master bedroom that opens to a Jacuzzi, or a master suite with separate areas. In fact, when asked which part of the condos was his favorite part, Griffin named the master suites. “The massive windows and luxury bathrooms will get people’s attention,” he said. 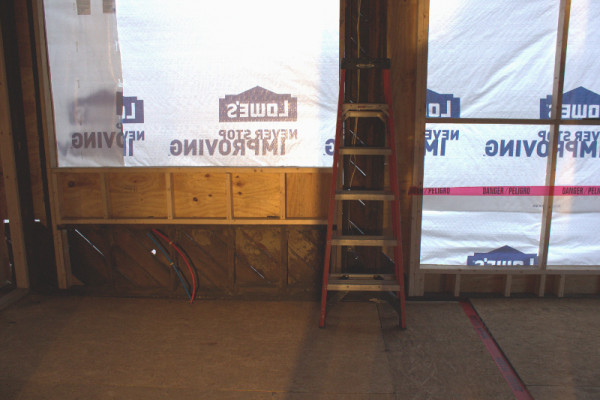 Two large windows grace a wall of the north condo’s master bedroom. The window on the left will be above a Jacuzzi. (photo by Dawn Olsen) 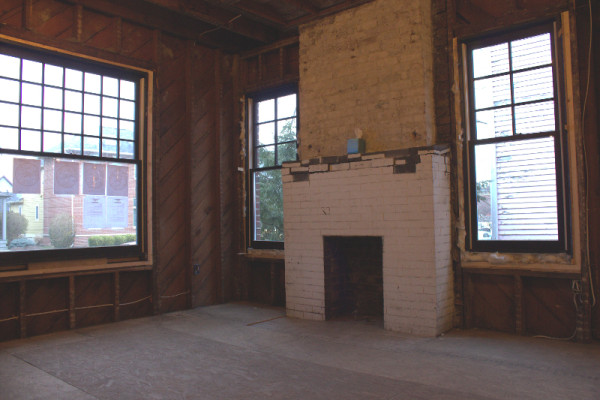 Each condo will have a fireplace. The fireplace mantles will be replaced, though interior architect Brent Mather is still brainstorming what to install. (photo by Dawn Olsen) 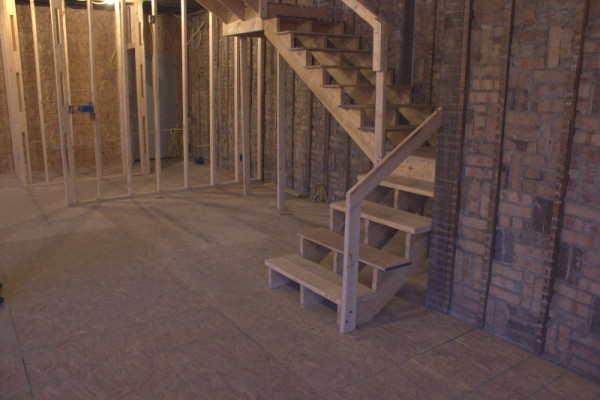 The staircase in the south condo. The stairs will feature a glass railing. Kitchen cupboards will be built beneath the stairs, and the refrigerator will be underneath the landing. (photo by Dawn Olsen)

Thankfully, the exterior of the building didn’t require as much rehabilitation. And since the renovators worked heavily with IHPC on the overall look of the main facades, Mather said the exterior was “more about ‘repair’ than ‘fix.’” It was the inside, rather, that needed the majority of the work. As Griffin said, “The interior was a complete mess.”

The Redstone Condos won’t be finished until later this year, but Indreno hosted an open house for the property this past Friday. The special hard hat tour—which benefited the New Tinker Street Committee—allowed guests to wander about the condos’ framed walls and first-floor open floor plan. Even with sub-floors and unfinished mantles, there is already evidence that the condos will be high-end. Luxurious. Competitive. Mather and Griffin look forward to finishing the project, and are eager for new residents to add personal touches to the historic building, especially since it was left forgotten by its frequently-changing owners. “Our goal from day one was and is to take on projects that others have left abandoned,” said Griffin. “I think it’s much more beneficial to give life to an old home rather than to tear it down.” 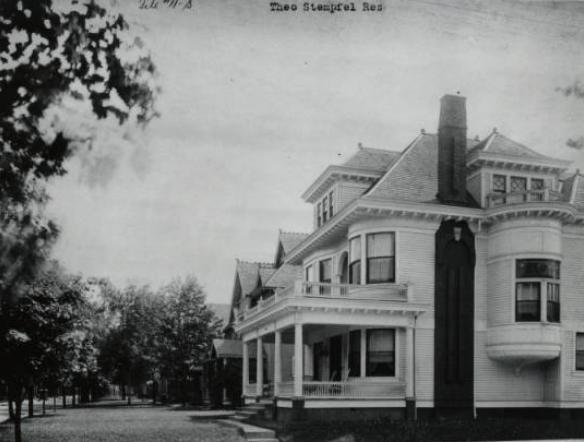 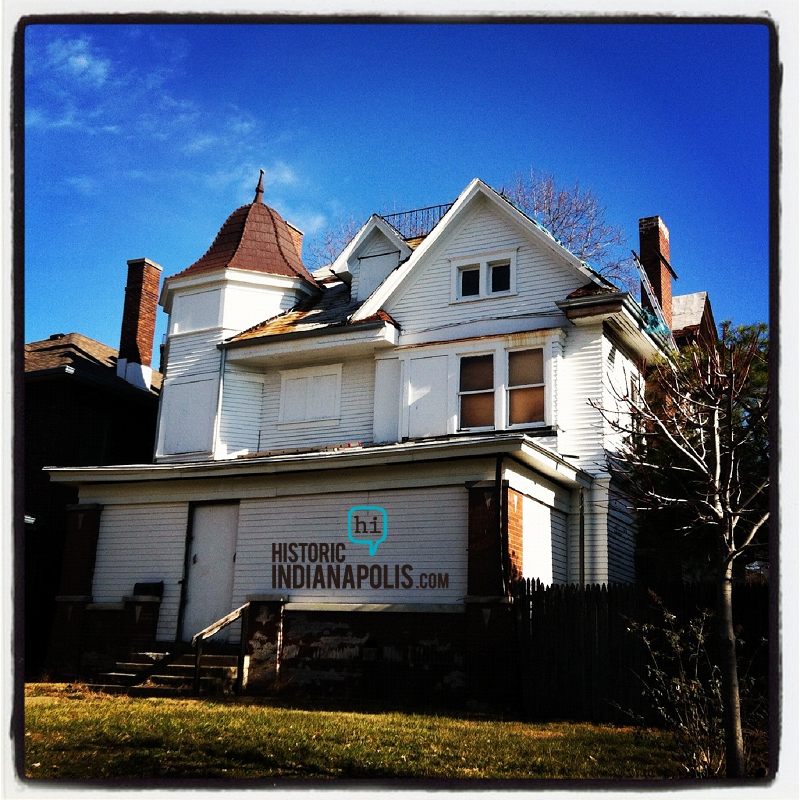