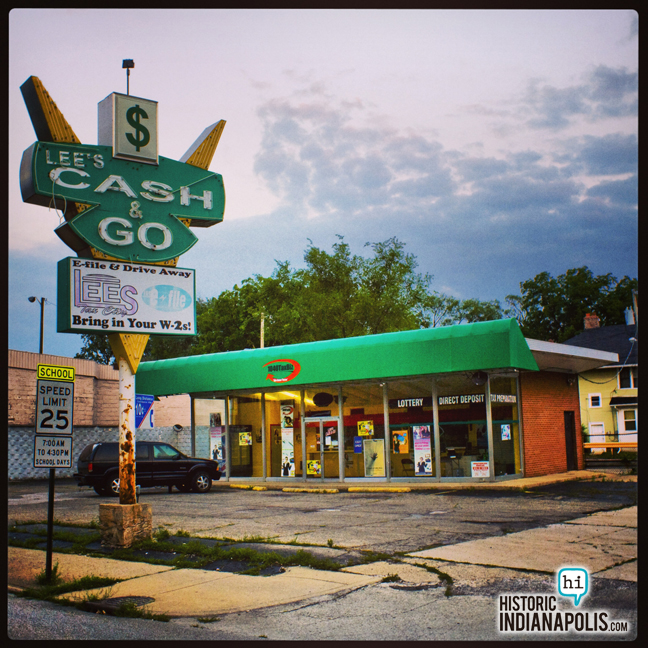 On a quick jaunt to Chicago this weekend to see an exhibition soccer match at Soldier Field, several billboards scattered around the city reminded me and the other 4th of July weekend traffic weary travelers, of the pending return of Twinkies, Wonder Bread and the rest of Hostess’ offerings on the 15th of this month.

I‘m certainly glad the Eastside Hostess/Wonder production facility on North Shadeland is providing both dozens of jobs to a city that needs them as well as an opportunity for me to make good on repaying a debt in the form of a box of raspberry Zingers that I may or may not owe Historic Indianapolis.com’s fearless leader, Tiffany Benedict Berkson. Confectionary debt aside, if we’re talking the rebirth of pastry pushers past, there’s only one name foremost on my mind; that of Indianapolis’ own Roselyn Bakery.

Roselyn’s story begins with John S. Clark Sr.’s employment at Citizen’s Bakery in Clarksburg, West Virginia. There, his son and bakery groupie, John S. Jr. would hang around the ovens and do odd jobs around the bakery before the senior Clark relocated the family to Indianapolis to work for the Chicago-based bakery supply company, Chapman & Smith. Eventually, John Jr. would study Mechanical Engineering at Purdue in the 20s, but left his junior year when John Sr. passed away. To support his family, John Jr. left Purdue and took his father’s position at Chapman & Smith, traveling to bakeries all over the state, giving him an inside look at what led to success and what led to failure in the world of baking. While attending a dance at Butler University in early 1930, the young John Jr. met the fetching Mildred Goepper and married her in September, later that year. 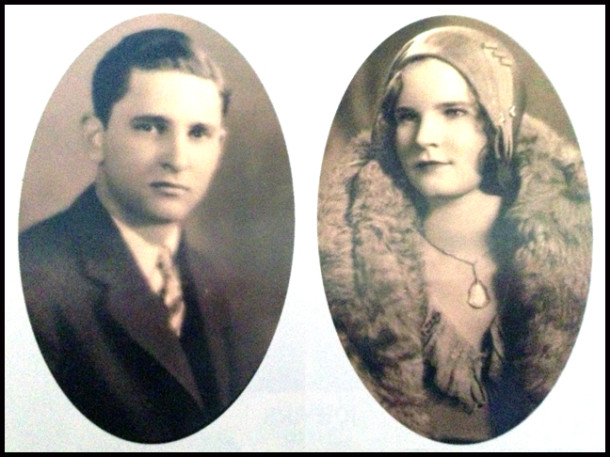 Thirteen years later, on a sales run to a bakery at Meridian and 22nd Streets, John opined to the baker how he might improve his struggling business. The baker said that if John could do better himself, he should do so. A challenge John accepted, making the baker an offer on his business and establishing his first bakery. John and Mildred were set on calling their new business “Rosemary’s” and had a sign under construction before learning of a bakery in Marion, Indiana of the same name. Short on start-up funds, they salvaged the sign, opting on a slightly different name. With that, the first Roselyn’s Bakery was open for business in 1943. 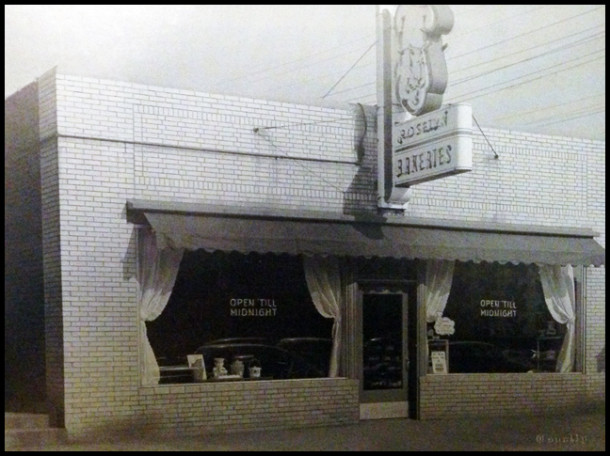 The first Roselyn Bakery location at 22nd Street and Meridian, from 1948. The original building has been replaced by a Subway and Little Ceasars – photo from the Roselyn’s Cookbook.

With World War II in full swing, Clark Jr. was drafted into the army that same year and was deployed for nine months, during which time Mildred held down the proverbial fort at home–running the new bakery herself, taking over the administrative side of the company upon his return. With war rationing still in full effect, the couple purchased a donut shop with a large flour and sugar ration and opened up another location to keep said ration. Things were running smoothly by 1950 when a local chain of groceries approached the Clarks about placing their baked goods in their stores. For this, a centralized baking facility was built at 30th and Keystone to handle the increased volume.

The bakery’s first mascot was “Chef Henry” until he was ousted by the blushing “Rosie” in 1955.

By the late ’50s, as they were about to lose the lease to their original location at 22nd and Meridian and while growing increasingly disenfranchised with the grocery store arrangement, John purchased a filling station across the street from store #1 and designed his first freestanding bakery. It was from this prototype that the ubiquitous Roselyn Bakery sign and building began to spring up around central Indiana. It was also around this time that John’s son, John R. Clark, joined the family business and ran the company with his father until John S. retired in 1976. Under John R.’s leadership, the company swelled to over 40 locations. 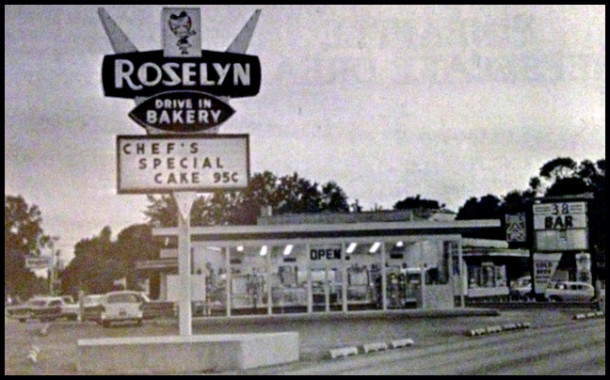 Roselyn’s Bakery Store #22 at 38th Street and Massachusetts Ave. in 1958. – From the Roselyn’s Cookbook

Things began to go off the rails with the tragic murder of John R. Clark in his home during a robbery in 1989, a killing that– to this day– remains unsolved. The slaying thrust then 22 year-old Jeff Clark into leadership of Roselyn’s, soon joined by brothers Jack and James. Under the three brothers, Roselyn’s continued to thrive throughout the ’90s until in 1999, a critical state health inspection of their 30th Street production facility revealed some, shall we say, less than ideal cleanliness issues.

The media attention payed to the health inspection (understandably) took a giant bite out of Roselyn’s profits. Though the facility was scrubbed and passed a second inspection, the family, who had gone into what their PR firm described as a “bunker state” after their father’s murder, refused to let the media into the bakery center to film and photograph it for themselves, instead opting to use their own photographer to document the clean-up, producing photos that no one was interested in. On the eve of a second scathing article by the Indianapolis Star, the brothers determined that they could not afford to ride out the aftermath of the scandal and shut down all of their bakeries for good.

The sudden absence of so many uniquely small buildings around central Indiana led to a small real estate rush to scoop up the former Roselyn’s, transplanting many decidedly non-confectionary businesses in their stead. From Revol Wireless stores to H & R Block franchises, Indianapolis is dotted with flying-V shaped signed reminders of a bakery empire that once was, but now only exists on shelves of select grocery stores throughout town. 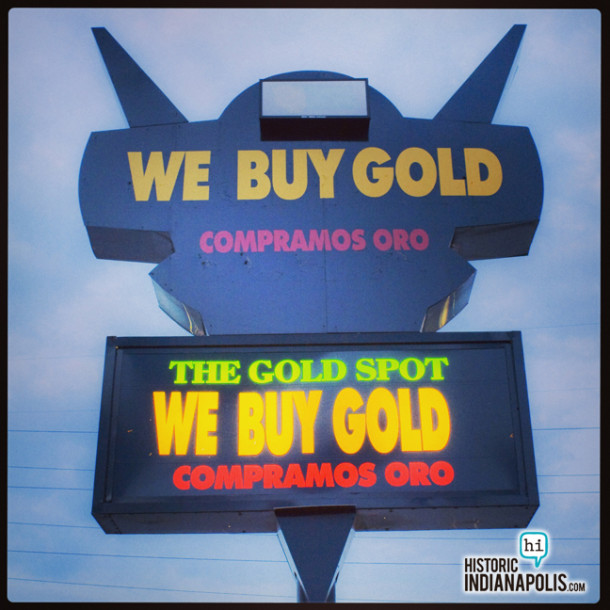 Store #22 and its repurposed sign still exists at 38th and Mass Ave. – Photo by Ryan Hamlett 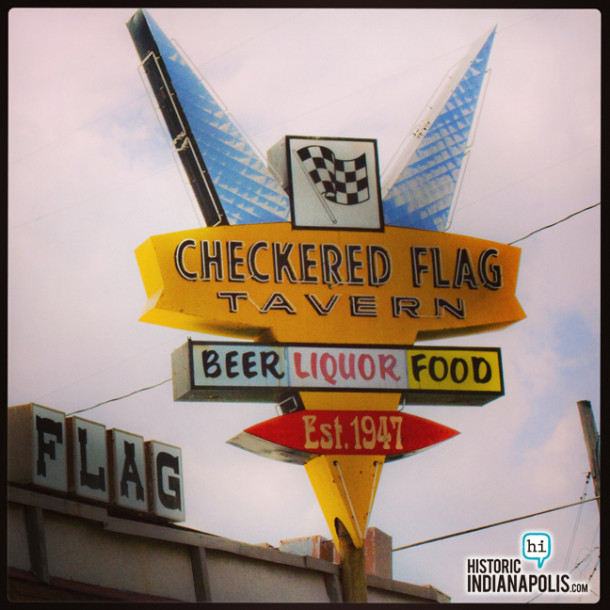 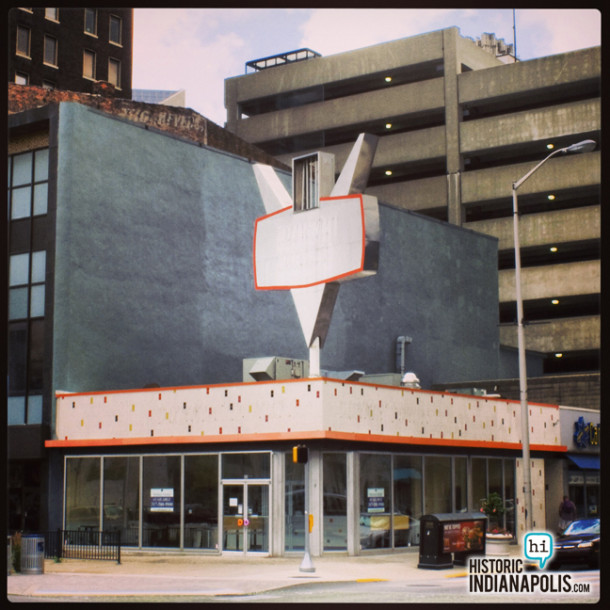 Perhaps the most visible reminder of Roselyn’s absence, Store #23 at Washington and Pennsylvania, downtown. Post Roselyn, it had been a Panda Express Chinese Restaurant and most recently a recently closed Dunkin’ Donuts franchise – Photo by Ryan Hamlett