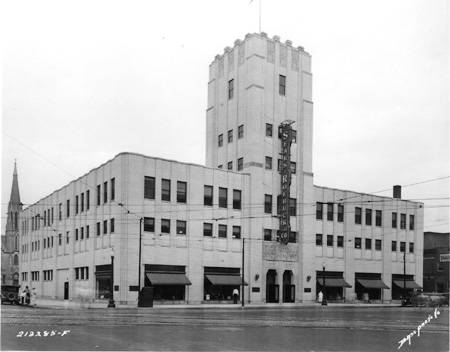 Sears, Roebuck and Co. opened its first location in Indianapolis on July 25, 1929, just three months ahead of the stock market crash and the onset of the Great Depression.  The timing was not ideal, but store manager M.C. Penticoff was confident his new store would do well. “Indianapolis has the potential to take its place among the commercial centers in the Midwest.”  The exact place, as far as Penticoff was concerned, would be the southeast corner of Vermont and Alabama Streets – 333 North Alabama.

The newly constructed art deco building quickly followed along the merchandising strategies found at Sears stores nationwide. They peddled everything from knickers and yarn to hardware and appliances. Shoppers could go to Sears for any item needed in a home, including the kits for building the house in which to put them.

Indianapolis indeed proved to be a good market for Sears. Additional locations in the suburbs began popping up in the early 1960s.  By then, the 30-plus year-old flagship store seemed dated.  So in 1964, Sears spent a million dollars remodeling the structure to “keep step with Indianapolis’ downtown renewal program.”  The updates included changes to shopping areas designed to re-categorize merchandise into three areas—clothing and fashion departments on the first floor, furnishings on the second floor, and sporting goods, radios, TVs, and catalog sales in the basement. Outside the building, they covered the art deco exterior with aqua-colored porcelain and enamel panels illuminated with Mercury Vapor lights.

Fifteen years later, Sears Downtown celebrated the fiftieth anniversary of its grand opening with an open house, a show of 1929 fashions, and a contest to see who owned the oldest edition of the Sears Catalog.  A display of classic Model T’s graced the parking lot in front of the Sears Auto Center located on the opposite corner of Vermont and Alabama. 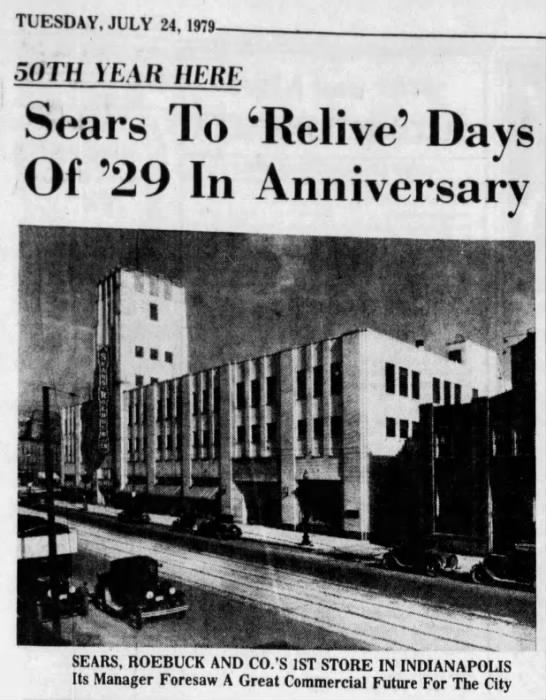 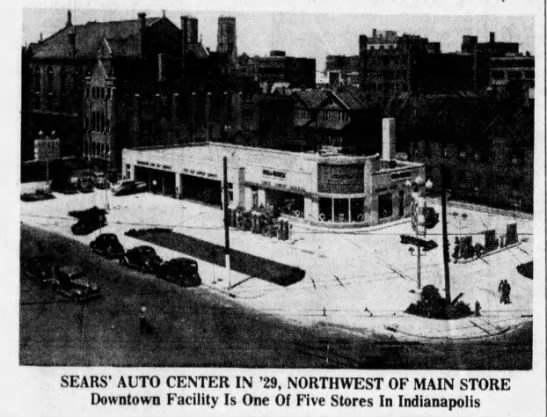 Sears Auto Store as it appeared in 1929 on the northwest corner of Alabama and Vermont Streets. Source: Indianapolis Star, July 24, 1979.

The anniversary celebration was a fitting tribute, but business was not as robust as it had once been.  Just four years later, Sears announced the store’s closing, explaining that it had been operating at a loss for the prior five years and that it had been a “victim of changing shopping habits.” The store closed, officially, on July 16, 1983. Sears hoped to sell four parcels connected to its store in one package—the main building and parking lot, the credit office near East and Vermont, and a separate parking lot near the Athenaeum.  The Sears Automotive Service Center and a “scratch and dent” outlet on Massachusetts Avenue remained open a little longer. 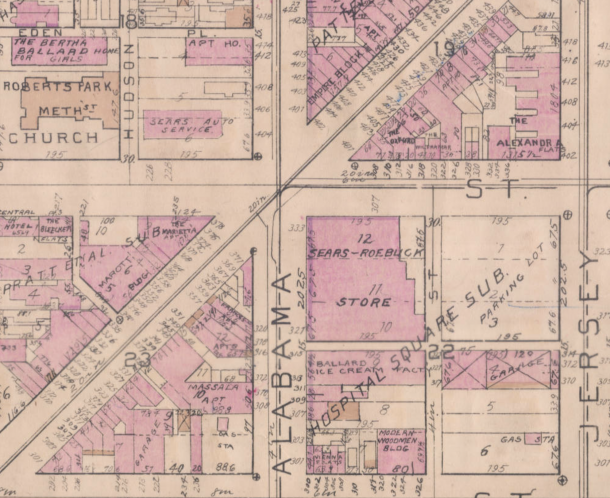 Showing the Sears Auto Service Center on the northwest corner of Alabama and Vermont Streets, across from Sears-Roebuck on southeast corner of same intersection. Indianapolis Baist Map, 1929 IUPUI Digital collection 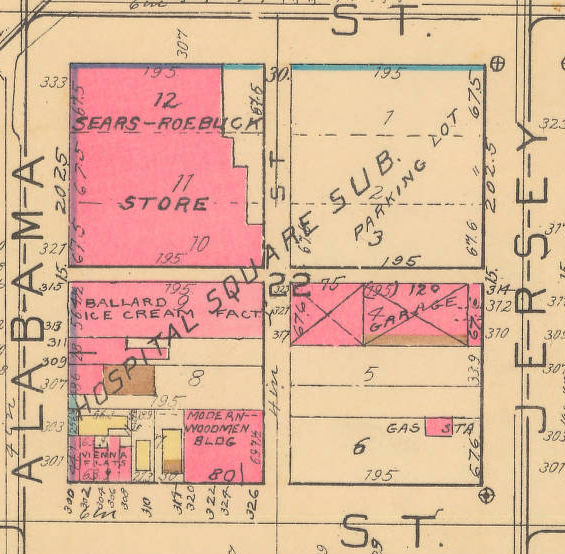 Footprint of Sears, Roebuck in 1941, including the entire block bounded by Vermont to the north, New Jersey to the east, New York to the south, and Alabama to the west. Indianapolis Baist Atlas Maps, 1941, IUPUI Digital Collection.

In an effort to assert some control over how the property might be redeveloped, Mayor Bill Hudnut and the city of Indianapolis went to work quickly to buy the parcels. The Metropolitan Development Commission approved the purchase of the four properties in September 1983, setting the wheels in motion for a complete redevelopment of the site, which included plans to remove the exterior enamel panels from the store as part of a campaign to qualify the building as a historic structure.

By late 1986, the old building was the centerpiece of Lockerbie Marketplace, a $15 million project by Mansur Development Company. O’Malia’s Food Market took the ground floor’s 35,000 square feet– the first large supermarket in downtown Indianapolis in decades. They established an east facing entrance to the store that changed the address to 320 North New Jersey Street.  Daniel O’Malia, president of the store chain, described his company’s venture downtown as “riskier than average for the store, but could also have greater than average rewards.”

Despite years of concern about the viability of a grocery store in the neighborhood, O’Malia drew encouragement from a small but loyal customer base and began to see the gamble pay off. In 2001, O’Malia signed a new lease to stay in Lockerbie for six more years. That summer, Marsh Supermarkets announced a deal to take over the store. Eventually, rumors surfaced about Marsh closing the location, but in 2007 Marsh and Sun Capital Partners, Inc. made a commitment to downtown Indianapolis with a $3 million facelift to the building, and they rebranded the store as Marsh the Marketplace at Lockerbie.

Marsh occupied the old Sears store until early 2017, when the chain filed for bankruptcy. It sold fifteen of its former locations to Ohio-based Fresh Encounter, Inc., which has renamed eleven of them, including this location, as Needler’s Fresh Market. These days, the old Sears property is more than a grocery store. Lockerbie Marketplace, bounded by Alabama, Vermont, New Jersey and New York Streets, has grown as a center of business and work life in the neighborhood. The upper floors of the Sears building feature work-space services and other businesses. An open courtyard connects the store with neighborhood-serving businesses, including a dry cleaning service, a hardware store, professional offices and community service groups. Parking at the northeast corner of the block, even in two-hour limits, is an especially welcome and essential service in the area.

In its heyday, Sears, Roebuck was the place where you could find most anything you needed in one place. Years later in a different way, its former building and the rest of Lockerbie Marketplace has formed another version of that original vision.

For more on Sears history, stay tuned for Part II. 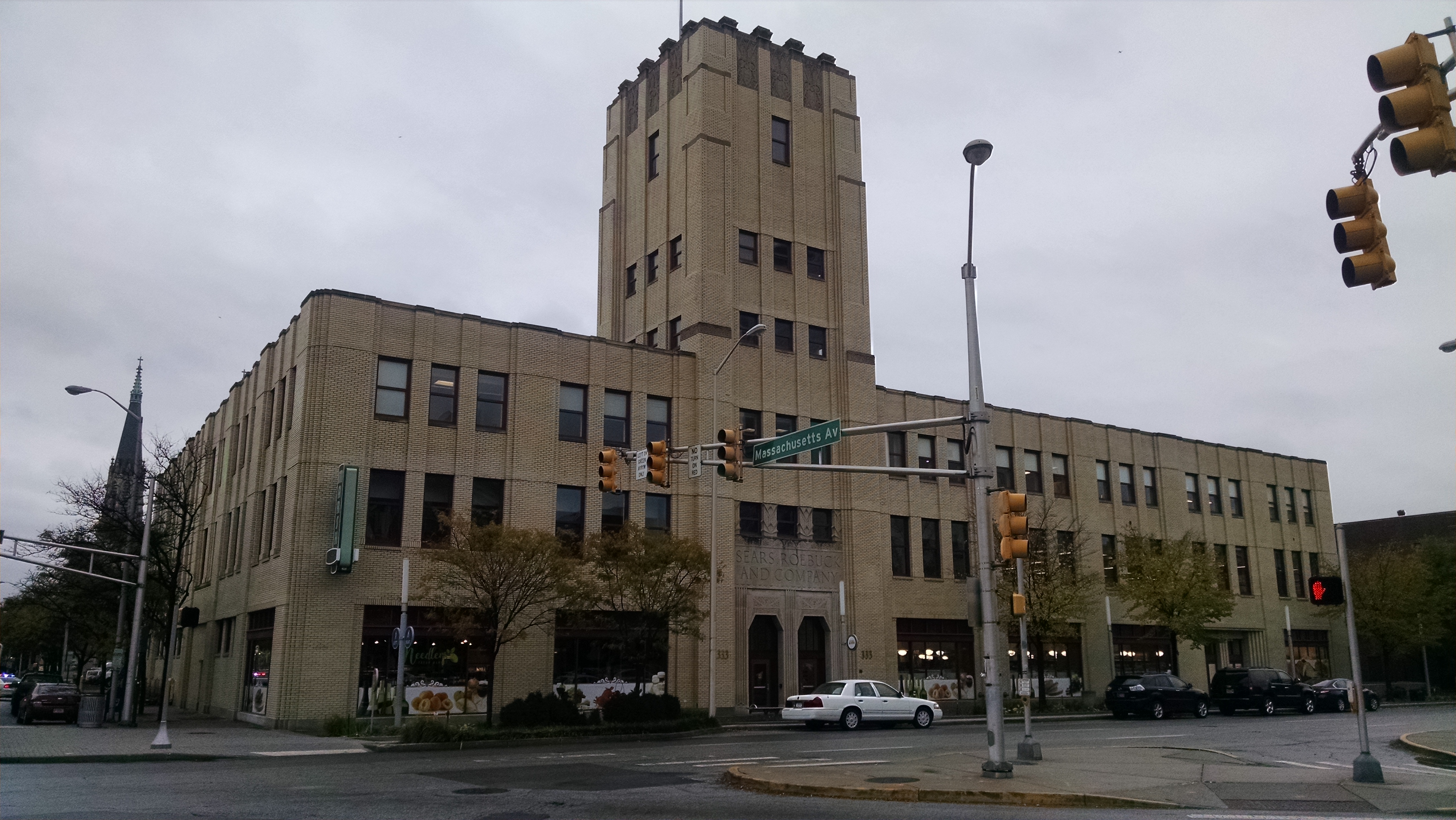