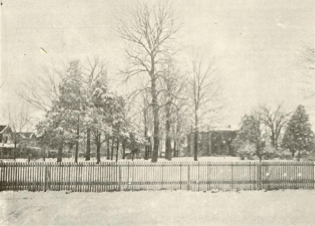 Once upon a time, before there was a thoroughfare of any name or form, much of current day Talbott Avenue (within Herron-Morton Place) belonged to Samuel Henderson, first mayor of Indianapolis. A substantial portion of this land was acquired by the William Tinker family, circa 1850.

An 1870 map labels that same tract of land “W.H. Talbott, a.k.a. Washington Houston Talbott, husband of Elizabeth Coram Tinker Talbott. 100 plus years ago, the local geography was replete with namesakes of these early land owners. What was once Tinker Street became 7th and finally 16th Street. North of 16th, Illinois Street was once named Henderson Street. The street (no longer in existence) that ran east-west between Pennsylvania and Talbott, and situated half-way between 16th and 17th, was Coram Street; and flanked by Pennsylvania and Talbott where 18th stands today, was Houston Street.
The earliest listing of any street bearing the name Talbott appeared in the city directory of 1885; the location of “Talbott Avenue” described as: “from Seventh (16th) to Exposition grounds (19th) first east of Penn.” One may presume that since the land belonged to the Talbott family, the correct spelling of the avenue has two t’s. Why so many misspelled signs? One theory of the missing last ‘t’ malpractice blames the creation of the Talbot phone exchange; another popular theory: simple human error.

The appearance of confusing signs alternately indicating ‘street’ and ‘avenue,’ seem to have commenced with the formal change from the original ‘avenue’ to ‘street’ from 15th northwards “…by ordinance No. 56 in 1912. Then ordinance No. 130 of that same year changed its name from 16th street north back to Talbott ‘avenue.’ The block from 15th to 16th thus remained as a ‘street.’”

To add further confusion, either artistic license or lack of an editor launched the “Talbot Street Art Fair.” Or maybe that was a clever future branding specialist at work? Whatever the case, the spelling of the popular fair does not match the street (or in this case, avenue, on which it is held.) We’ll give them a pass on calling it “street” in the title, since its early geographic location was, in fact, south of 16th in the alley.

Whatever the case, enjoy your next Talbott Avenue outing and the variety of its signs; who knows—maybe there’s a “Talbutt Road” sign yet to be discovered.