North Meridian Street has always been a popular area for housing. Have you ever noticed the gorgeous apartment building at Meridian & Vermont Streets, The Blacherne? Did you know it was built by General Lew Wallace with royalties from his book, Ben Hur? On the same block of Meridian, closer to Michigan Street once stood another apartment building, The Surray. The structures, built in 1895 and 1902 respectively, were constructed long before the apartment boom of the 1920’s would overtake a corridor farther north on Meridian.  Between these two structures, lies a younger and much larger building, the Spink-Arms Hotel.

Below is a photo of the Blacherne in 1906, 16 years before the Spink-Arms Hotel was built immediately north of it. 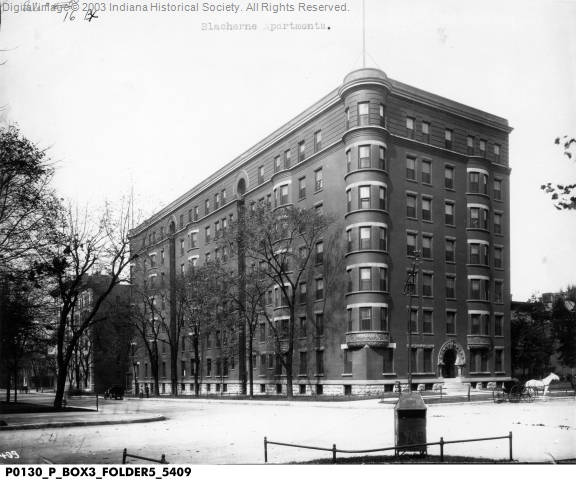 Built at the very end of the 19th century, the Blacherne was considered the epitome of contemporary living; according to Hyman’s The Journal Handbook of Indianapolis, it was the “first pretentious flat built in the city.” The 7-story brick building with basement offices accessible from Vermont St is located at 402 N Meridian St. The east windows have a lovely view of University Park and had views of the 1st Baptist Church and the 2nd Presbyterian Church before those were demolished. The area within a block of both apartment buildings had a great deal of businesses, in its early years–the most common being laundry, tailoring, or automobile related according to the 1914 city directory.
Some other interesting nearby places include:
•      Candor Camera Club @ 212 N Meridian St
•      Indiana Democratic Club @ 22 E Vermont St
•      University Club @ 450 N Meridian St 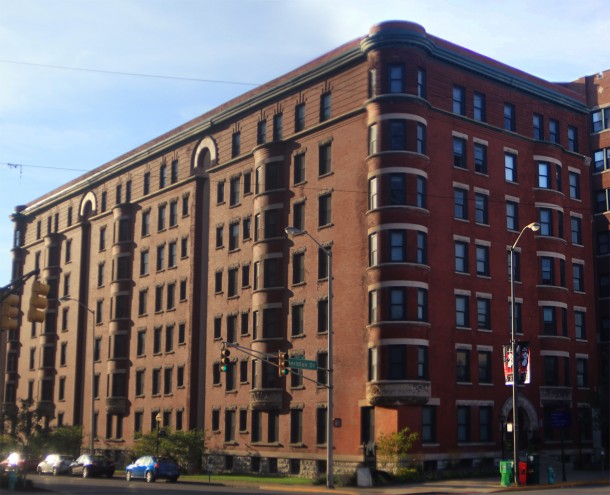 The second section of the building was completed in 1896, with the supervision of the general’s son, Henry Wallace. From the exterior, the Blacherne appears to be constructed only at one time; from the inside, this addition can be identified by looking at foundation walls and hallway walls. An 1896 newspaper described the comfortable spaces of the Blacherne in detail – there were 58 spacious units, each with 8 rooms, had a sitting/library combination room, and small kitchens, likened to a dollhouse which contained no sinks! Amusingly, young bachelors weren’t allowed to live in the building, as they were ‘inclined to be hilarious.’ Most of the tenants of the building were wealthy and tended to be widows or widowers. Some well-known early residents include:
•    Harriet Noble – Chair of English literature at Butler University; gifted clothing to the IMA; active in suffrage movement
•    Ovid Butler – Founder of Butler University; owner of land in Old Northside neighborhood
•    Stoughton Fletcher – son of Calvin Fletcher; banker and manufacturer

Below is a close up of the Blacherne’s stone lintels and elaborated arched doorway stone carvings. 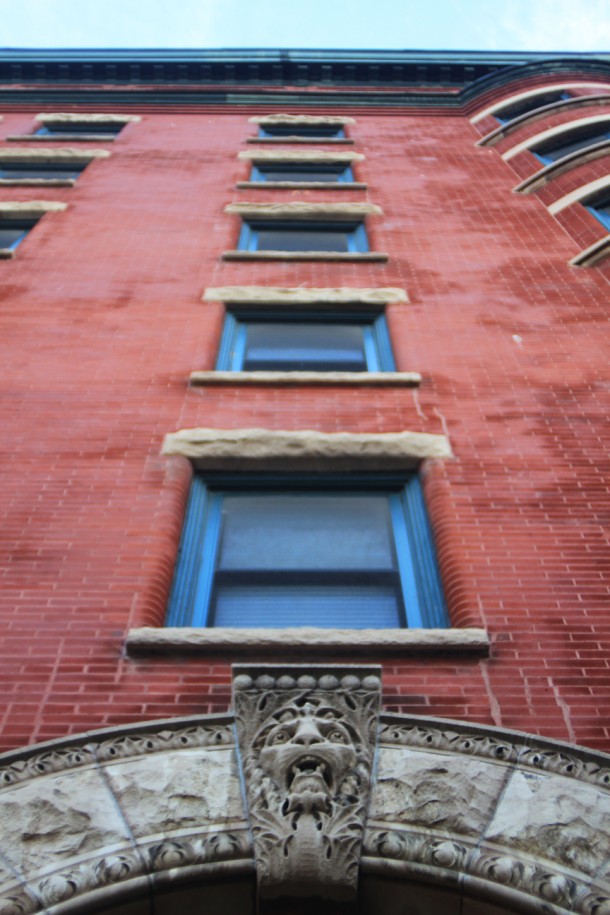 The Blacherne was given a second life after being listed on the National Register of Historic Places, which led to its’ renovations. City plans had called for a demolition, and the tenants had been moved out of the building. The U.S. Department of Housing and Urban Development stepped in to help save the building. In 1999, the Blacherne secured a developer, Meridian Renaissance Associates, after original developers backed out. Plans called for the Blacherne to be converted into 62 units for $3.3 million. Unfortunately, the Surray did not reach the same fate; it was demolished in 1950 and the land was redeveloped in 1952 for the 2-story structure currently leased by the U.S. Post Office.

Below is a photo looking up the light shaft; it was converted to a ventilation shaft (unknown date). 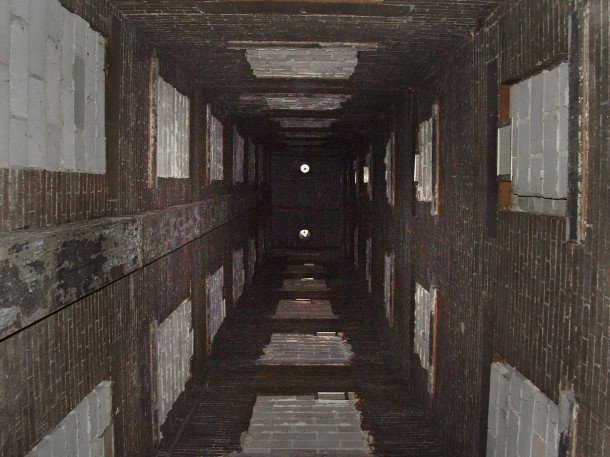 James Cordell, Principal Architect from Heartland Design, had some insight on the structure’s renovation. Heartland Design worked with Meridian Renaissance Associates to renovate this structure. Walls of rough hewn limestone were exposed in the basement, which were then turned into offices. An elevator tower was added between the apartment and the garage. Also, a structure connecting the Continental Towers to the Blacherne was constructed in the space that was once a one-story bar. There was also a wooden spindle staircase that was restored using as much as the original pieces  as possible. 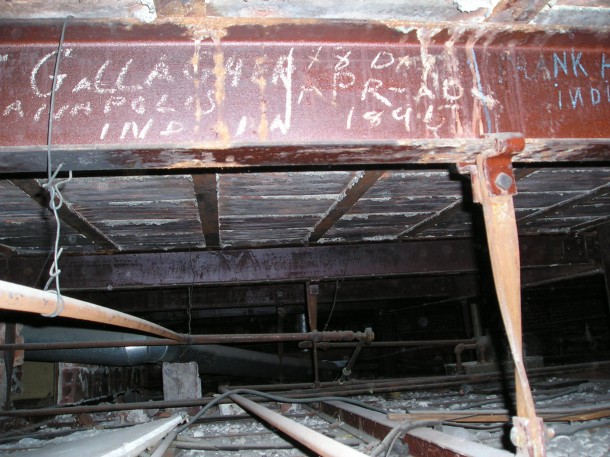 Above is an image taken during renovations, an attic beam signed and dated 1895. 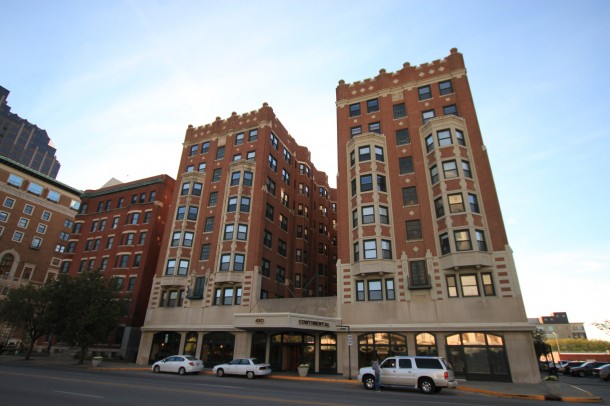 Between the Blacherne and the Surray was the Spink-Arms Hotel, today known as The Continental, at 410 N Meridian Street.  Built between 1919-1922 by the E.G. Spink Company, this 8 story brick and limestone Tudor revival structure was much greater in size than the former 2 buildings, reflecting the need for more apartment dwellings in the city. The southern section was built in 1919, and the northern section and center were built in 1922. It originally contained 121 units and had a large cafe on the first floor. It was renamed the Continental Hotel in the 1950’s during a renovation. It was renovated again between 1972-1974 and in 2000 and currently contains 124 units.

Below is a photo of the Spink-Arms Hotel, with the Blacherne on the left, in 1954. On the first floor between the two structures is a small bar, which was demolished. That area currently serves as a connector between the two buildings. 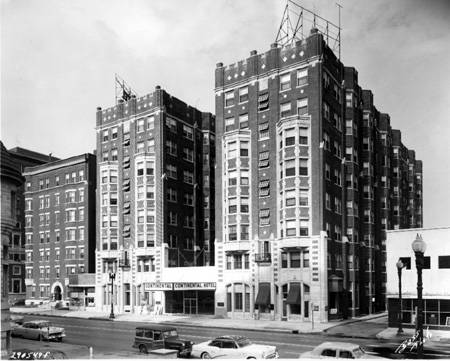 Below is a photograph from the Indiana War Memorial, with General John Pershing laying down a cornerstone in 1927. The perspective is  looking towards Meridian St & Michigan St; the building on the left is The Surray, in the middle is the University Club, and on the right is The Meridian. 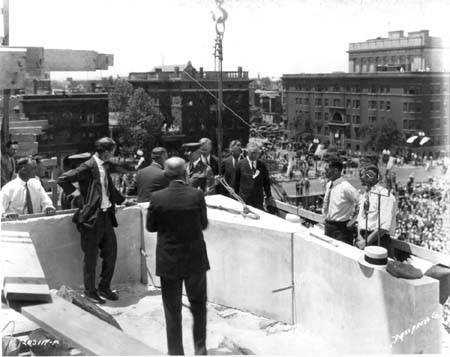 In 1902, The Surray, sometimes spelled Surrey, was erected at 430 N Meridian Street. The 3-story brick building had heavy stone lentils and slight curved bay windows and contained 6 units, 2 on each floor. In 1905, the Indianapolis Conservatory of Music moved in. Edgar M. Cawley was the director of programs. The conservatory also focused on dance, languages, and theatre. Claiming to be the largest school of music in the Midwest at the time, the ICM stated that one hundred partial and free scholarships were given out. Many of the female students lived in the building. The ICM moved out in 1917 after purchasing a home in the Woodruff Place neighborhood, the Bert Essex property at 926-940 Middle Drive. In late 1917, all of the units in the Surray were renovated for living quarters again including replacement of wood flooring. The apartments remained until it was demolished in 1950.

Below is a postcard from 1907 of the building during the time it was inhabited by the Indianapolis Conservatory of Music. The University Club is to the right. 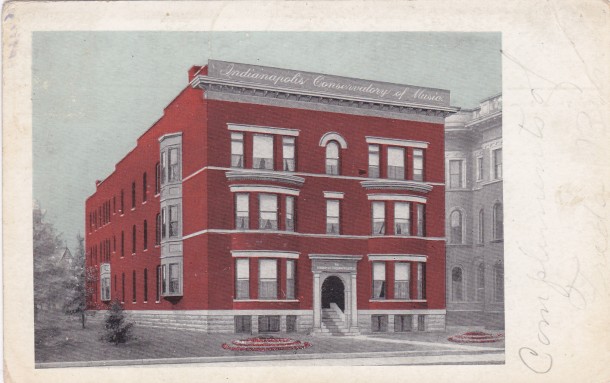 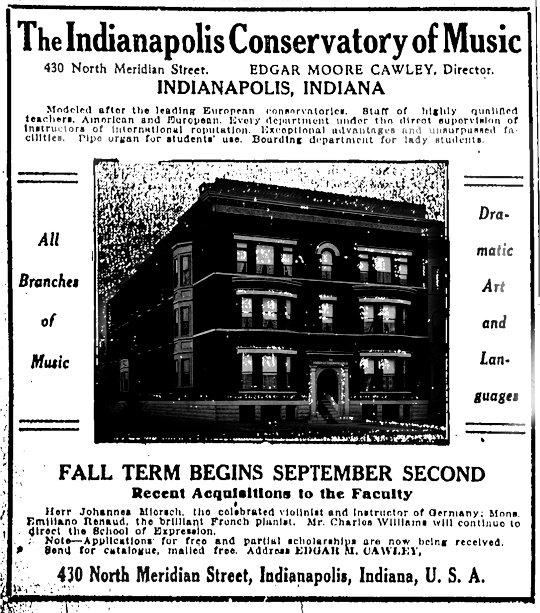 Advertisement from the Indianapolis Star from Sept 8, 1907.