During its eight years in business, the American Motors Company of Indianapolis became well known for its “underslung” design, conceived by chief engineer Fred I. Tone.  In those years, the company produced over 45,000 automobiles, ranking them third inIndianapolis’ Top Ten auto producers.

American’s genesis was at 910 State Life Building,Indianapolis, in 1905.  Founders V.A. Longaker and D.S. Menasco invested in the company after making a fortune in the lumber business in the Northwest.  Soon they hired Harry C. Stutz to design the first conventional chassis American cars, which premiered in 1906.

American offerings were assembled cars like many other automobiles at the time.  American contracted the Light Inspection Car Company in Hagerstown, Indiana, to build a suitable engine.  Tone’s first assignment as chief engineer and designer for American was to design a completely “All-American car from American-made materials.

Interestingly, the inspiration for this low sports roadster design came serendipitously.  One day in 1906, when the frames were delivered to American, they were unloaded upside down.  Tone seized upon the idea to mount the frame under the axles. The “underslung” was born.  From that day on, American built all roadsters underslung, while continuing to make touring cars and sedans on conventionally overslung chassis.

When the 1907 Roadster and the conventional Tourist – both selling for $3,250 – were announced in November 1906, American stated that output would be available in limited quantities.  American Roadsters garnered numerous headlines in races during the summer of 1907.

The magnificent emblem of an eagle on top of the world adorned the radiator face debuted in 1908.  By 1909, American offered seven models. Three on the underslung chassis and four were mounted on the conventional chassis.  The model year also introduced the company’s first closed car, the luxurious Limousine with folding seats and leather or broadcloth upholstery priced at $5,000.

American adopted the slogan “A Car For The Discriminating Few” for 1910.  In January 1911, J.I. Handley, a prominent figure in the automobile industry, purchased shares in American and helped organize the new American Motors Company.  He assumed the presidency with Longaker remaining as chairman of the board and general manager.  Menasco, known as the “Selling Trouble Shooter,” stayed on as vice president. 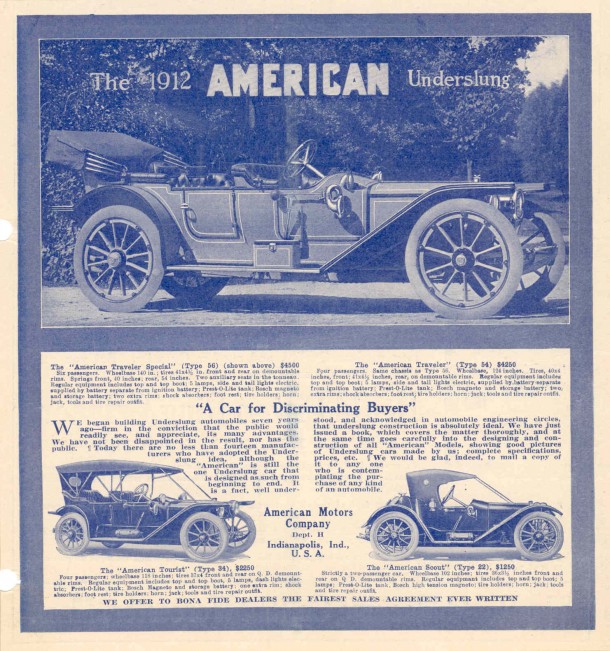 This new regime immediately set out to reconfigure the American line-up to compete in the medium price market for 1912.  The first offering, The American Scout, debuted at the company’s lowest price ever of $1,250.   The mid-line offering was the Tourist priced at $2,250.  The Traveler still occupied the prestige position in the line with a four- and six-passenger touring cars priced at $4,250 and $4,500, respectively.  All of these models rode on the underslung chassis, and the company adopted “American Underslung” as the car’s name.  All 1913 models included electric starting and lighting systems.

The company announced the 1914 American Underslung Six on April 12, 1913 in the Saturday Evening Post.  Yet, this proved to be an inopportune time for new automobiles because the country was trying to shake off the effects of the disastrous floods in late March and early April.

Cash flow at American was severely strained due to a heavy debt incurred through past plant expansions.  American recruited Frank E. Smith, a reputed efficiency expert, as assistant general manager to help solve problems.  In November, however, the Federal Court adjudged American bankrupt and appointed Smith as receiver.  By the spring of 1914, Smith deemed it advisable to suspend operations.

Supplier Ralph R. Teetor of the Teetor-Hartley Motor Company, purchased the last American Underslung built in 1914.  The car was a magnificent, 75 h.p., six-cylinder, seven-passenger touring car painted a brilliant lavender.  Perhaps Teetor has provided the best epitaph for this Indiana-built car: “I do believe that the American Underslung cars had the most dramatic appeal of any cars that were ever built, and ever since that company failed, have wished that it could have survived.”

American’s plant Number 2 at 1959 South Meridian Street remains today as visible remnant of this once viable concern from 100 years ago.  The next time you see a low-slung sports car you might think back to the Indianapolis’American Underslung roadster.