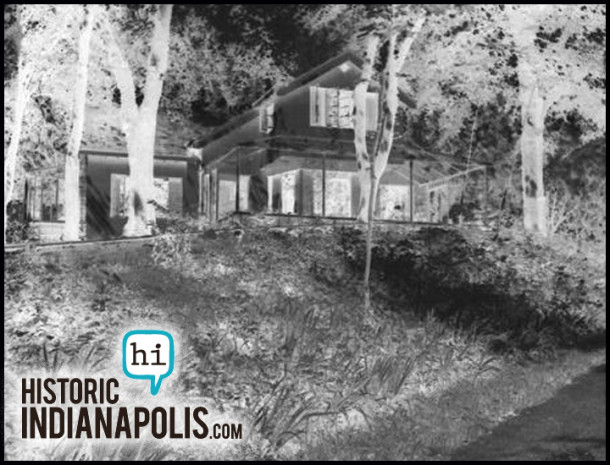 Once upon a time, it was a rite of passage for Indianapolis teenagers to park their cars at the end of a long, wooded drive off of Fall Creek Road on the northeast side. They traversed the steep, hilly, woods to get a glimpse of the macabre, a glimpse of a woman’s casket, wrapped in blue Christmas lights, kept in the strange house of her mourning husband. Others were so bold as to take a midnight dip in the eccentric millionaire’s elaborate swimming pool or cruel enough to place one of the dozens of cats that lived on the property into the nearby dog pens. 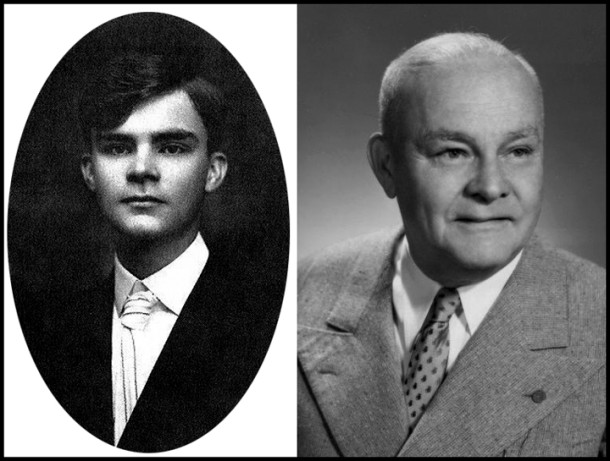 The true mystery surrounding what would become the urban legend known as “The House of Blue Lights” wasn’t the location of Skiles Test’s dead wife — in truth, his wife and two ex-wives long outlived him — it’s how and why the legend came to be in the first place. 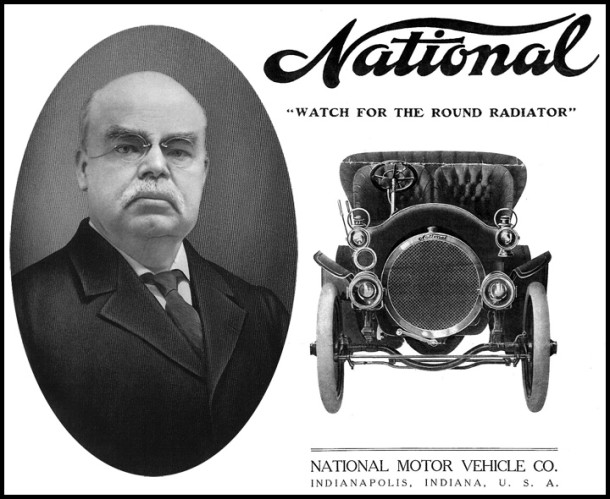 Skiles’ father, Charles E. Test, was president of the National Motor Vehicle Company until his death in 1910.

Skiles Edward Test was born in Indianapolis to parents Charles Edward Test and Mary Elizabeth Skiles on October 19, 1889. Charles Test had made his fortune as president of the Indianapolis Chain Works, founded by future Indianapolis Motor Speedway co-founder Arthur C. Newby, which became the Diamond Chain Company.  It’s still in operation on Kentucky Avenue today. In 1900, Test, Newby, and five others founded the National Motor Vehicle Company and set up operations northeast of downtown. National would produce the car that won the second running of the Indy 500 in 1912, driven by Joe Dawson. 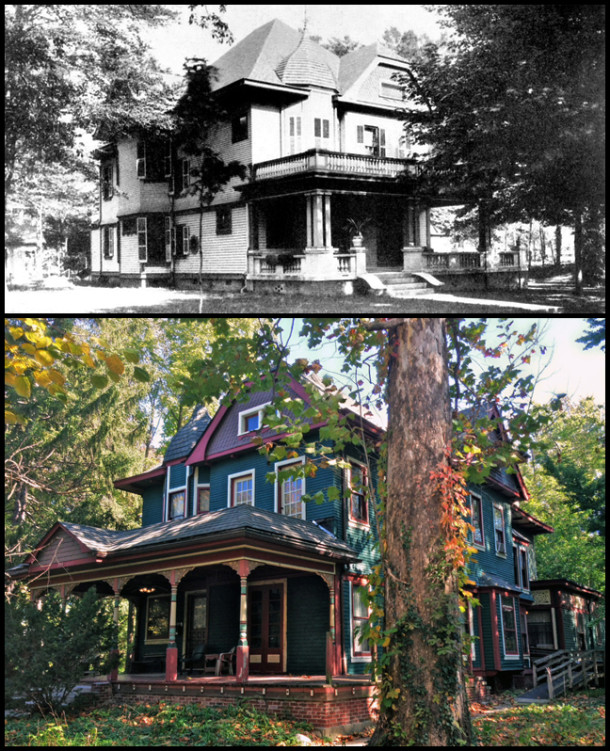 Above:       Skiles Test’s childhood home at 795 Middle Drive in Woodruff Place, circa  1910 (photo: chuckstoyland.com)    Below: the Test mansion as it appears today (photo: Ryan Hamlett)

Skiles grew up, along with brother Donald and sister Dorothy, in the mansion their father Charles built at 795 Middle Drive in Woodruff Place on the near east side. The mansion still sits on a giant lot, its heavily wooded garden obscuring the carriage house set back from the street. Nearby Arsenal Technical High School wouldn’t open until 1912, so young Skiles attended Manual Training High School, located at 525 South Meridian before it was relocated to Madison Avenue in 1953. Skiles was a permanent fixture on the Honor Roll and finished in 3 1/2 years, graduating in 1908. If he had intended on going to college, he never got an opportunity. Charles Test passed away in a Wisconsin sanitarium of Bright’s Disease in 1910, leaving the eldest child, Skiles, to head the family. 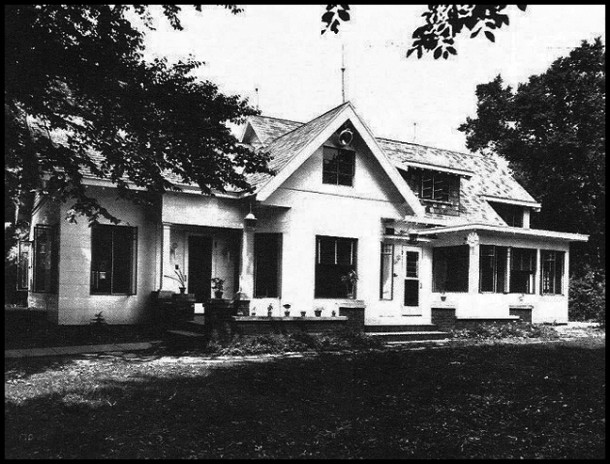 The Farmhouse. Likely the most famous photo of what would become known as “The House of Blue Lights” (photo courtesy of Garry Ledbetter)

In 1913, Skiles married his first wife, Josephine Benges, another Manual alum, and the two moved northeast of town into a small house, tucked away in a huge, heavily wooded farm. There, fueled by a brilliant technical mind and a seemingly endless supply of money, Skiles began to build an eccentric assortment of structures and contraptions. He built a small rail system around his property, with cars powered by National engines. He solved a dispute with Indianapolis Power & Light by building his own power plant on his property. His farm was fully functioning, employing as many as 20 people around the first World War, and it was said his cows would occasionally wander off and be found grazing on the golf course of nearby Hillcrest Country Club. 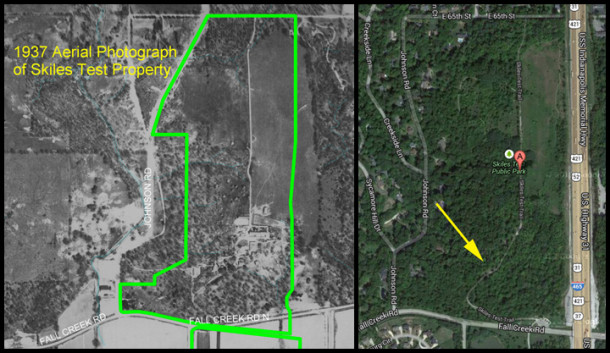 Left: An aerial photo of Skiles Test’s property from 1937 (from IUPUI CEES) Right: Satellite photo of the Skiles Test Nature Park. The approximate location of the house marked by the arrow. (Google maps)

But Skiles wasn’t simply sitting back and spending all of his inheritance. He and his siblings constructed a building on Monument Circle in honor of their father, hiring architects Bass, Knowlton, and Co. to design a nine-story building that also housed Indianapolis’ first parking garage. The Circle Motor Inn’s six stories and 200 parking spaces represented two-thirds of all the available parking downtown for a full 20 years after it opened in 1925. Skiles’ real estate company, the Test Realty Co., was also based in the building. Later, Skiles held true to his family’s motor vehicle roots and owned a Nash dealership. 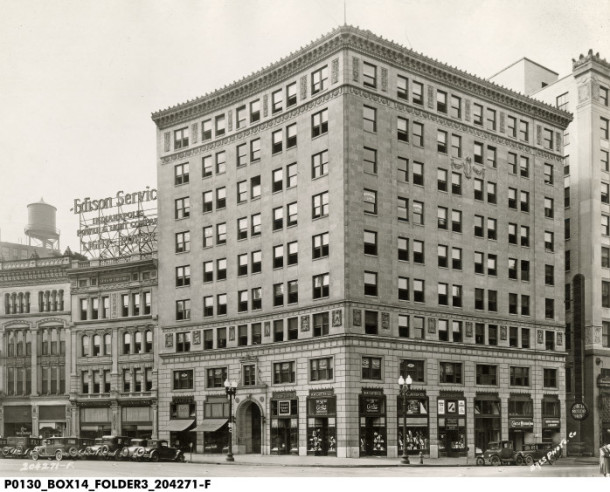 The Test Building at Monument Circle and West Market Street. Skiles Test held dozens of patents, many of which were innovations in multi-story parking garages.   (photo: courtesy of The Bass Collection at the Indiana Historical Society)

Left: Skiles and two of his St. Bernards. Middle: The cat house. Few of the dozens of cats on the property were brought in by Skiles. Many were strays that found their way to the cat house and were then allowed to stay. Right: A tombstone in the pet cemetery. Most cats and dogs were buried in small caskets and marked by tiny tombstones. (photos courtesy of Garry Ledbetter)

It’s uncertain exactly when the property began to gain notoriety. The 1975 book The House of Blue Lights by Kay J. Miclot suggests that the legend seems to begin to pop up between the two World Wars. Author and a former farmhand of Skiles Test, Garry Ledbetter, thinks it was closer to World War II. Skiles loved the color blue.  He put up blue lights each Christmas and hung blue bug-zapping lights around his enormous swimming pool. Initially, he was amused by the rumors surrounding him and his eccentric property. There were several variations, but the core legend had it that a rich old man lived in his secluded house, in which his beloved wife died by accident. So he kept her in a glass coffin, surrounded it with blue lights (her favorite color), and kept her in his house. A strange tale indeed, especially for a man as well known as Skiles Test, whose wife had not died, and who definitely had not fallen victim to some ghastly accident. But by the mid-1950s, there were so many trespassers wanting to catch a peek that Skiles had to put up tall fencing around the entire property. 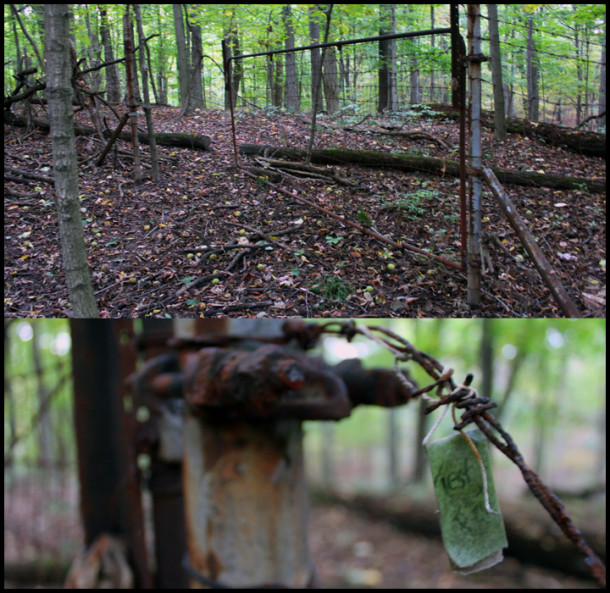 While all the buildings that made up Skiles Test’s farmstead have long since been razed, rusting fences still line the property and meander through the woods. This gate to nowhere still sports a tag reading “Test” and while it’s unlikely it dates back to Skiles’ time, perhaps it does. (photos: Ryan Hamlett)

Throughout the Fifties and into the Sixties, the trespassers and vandals became increasingly bold. Skiles found a group of teens swimming in his pool and took their clothes and keys, only to be sued by one boy’s father. Trespassers released dogs from their pens and started fires in outbuildings.  Skiles found a teen in his kitchen drinking a Coke he’d taken from the fridge. For a while, he took to sleeping in the multi-story pool house, its cinder-block construction being more fire-proof than the house. Plagued with stress-related ulcers, Skiles began to leave each night and stayed at his girlfriend’s house, so as to not be tormented by the nonstop onslaught of lookie-loos. 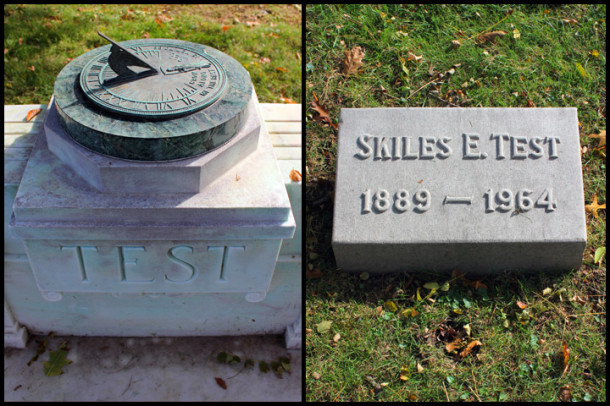 Skiles passed away on March 19th, 1964 and was buried in his family lot in Crown Hill Cemetery a few days later. The estate sale that followed was nearly as legendary as the house itself. An estimated 50,000 people showed up, some to bid on the loads of assorted items that Skiles had accumulated throughout his years, but most to get a up close look at his mysterious property.

After his death, the property quickly fell into disrepair, aided by a continued stream of trespassers and vandals. Left and Center: The swimming pool’s long slide and high dives. Right: The tunnel between the house and garage. (photos: courtesy of Garry Ledbetter)

The sale over, a bank took control of the property, promptly drained and fenced off his giant swimming pool and The House of Blue Lights and its neighboring buildings slowly fell (or were torn) apart. Finally, the city razed every last structure on the vast property in the mid 1970s. 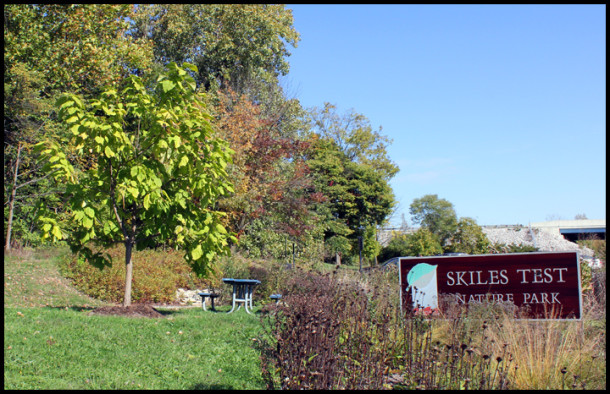 After his death, Skiles’ intended for his property to become a Boy Scout camp or a nature preserve. According to his will, as long as the city properly maintains the property, it will remain a city controlled preserve. 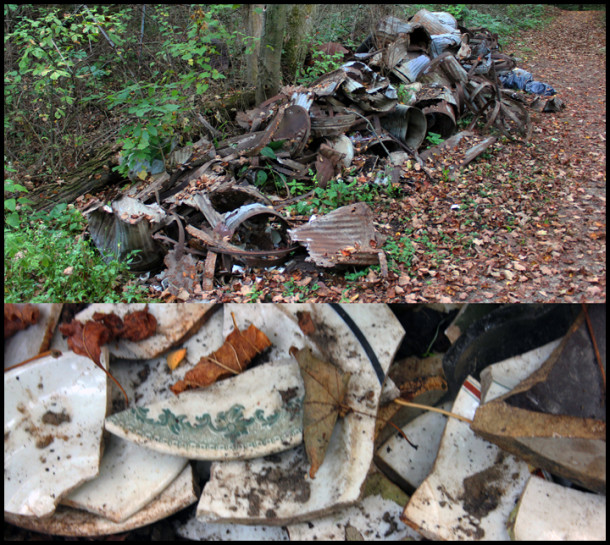 There are still a few random reminders of what was once on the property. The workers in charge of hauling the debris from so many razed buildings began to cut corners towards the end of their mission. Near the concrete slab at the top of the hill that once led up to the house, there are random, hidden and ankle-breaking holes in the ground; the explorer in me is just positive these lead into the old tunnel between the house and garage. Old ceramic drains pop up around the property and rusty fences are everywhere. Most oddly, random collections of broken china are heaped into piles of garbage cans so rusty that one should get a tetanus shot for looking at them. 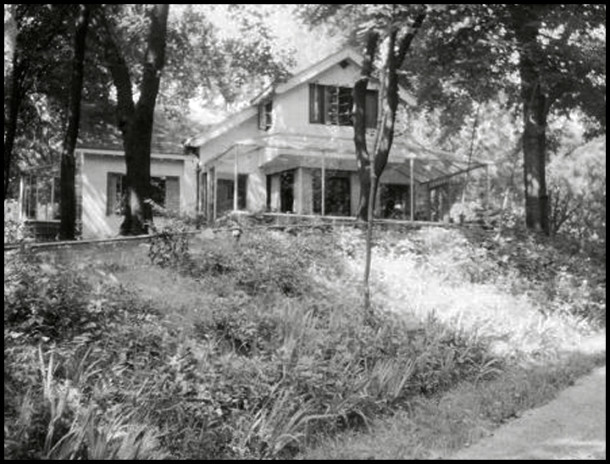 Though there is little that remains of what was “The House of Blue Lights,” and the legend isn’t quite as widely known today as a few decades ago, it refuses to completely fade away. And there are those who still swear that blue lights may still be seen flickering between the trees, were someone foolhardy enough to walk up the long, winding path into Skiles Test’s woods late at night.

Writer’s note: I’d very much like to thank local author Garry Ledbetter for taking the time out of his weekend to talk to me about Skiles Test and The House of Blue Lights. Garry actually worked for Skiles on the farm in the 60s and turned his experiences there into a novel, Murder at the House of Blue Lights, available to buy or download on Amazon.com. Garry will also be on a panel of five local authors talking about their books at the Irvington Public Library at 5625 East Washington St. on November 12 at 6:30pm. Go check it out. – Ryan 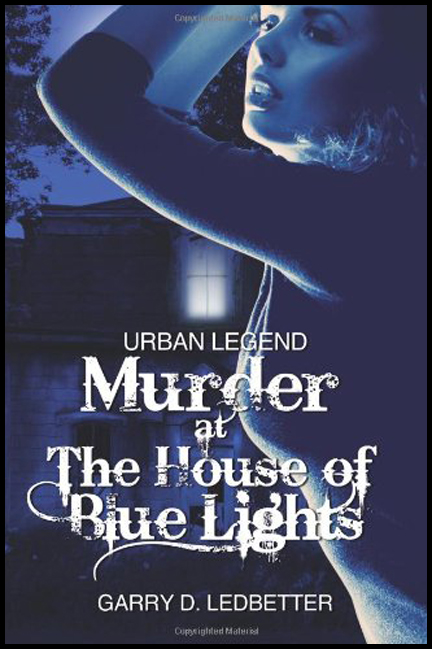 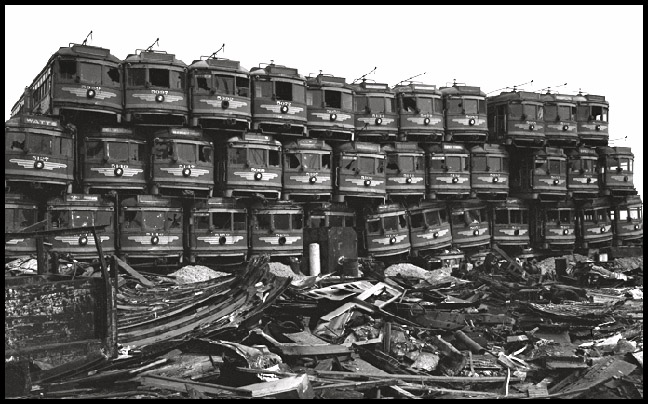