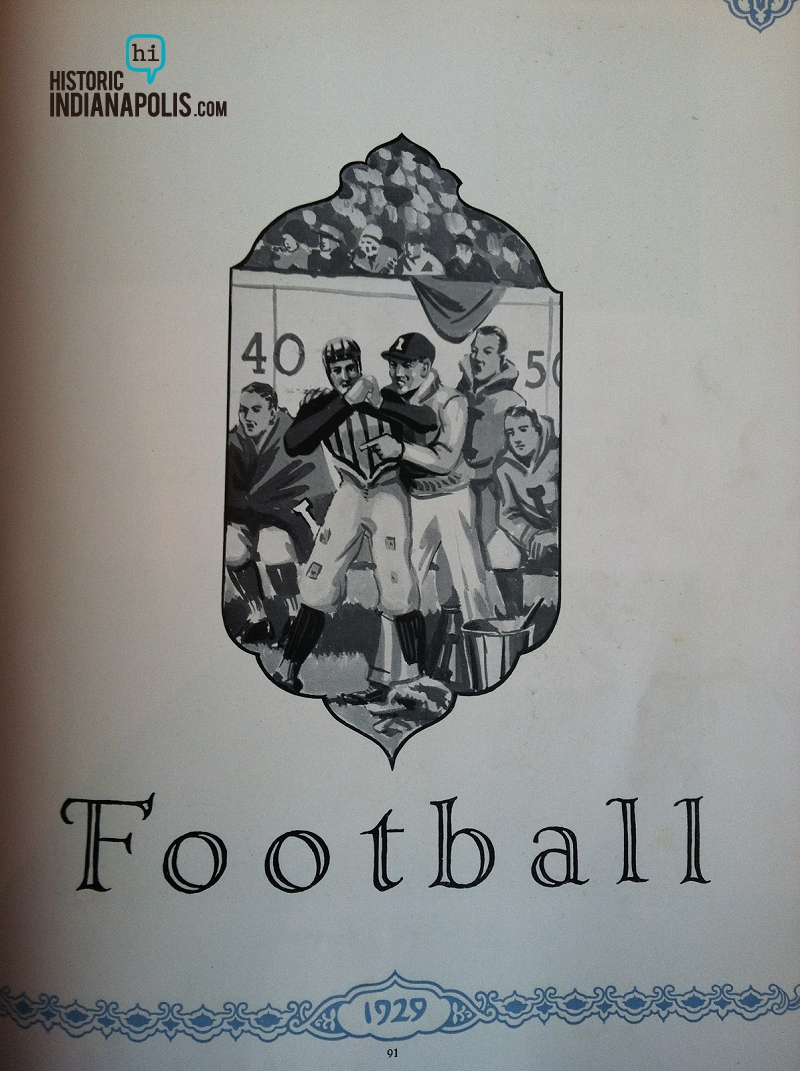 Ask someone if they know about Indy’s football history and the response is usually along the lines of: “Before the Colts, we didn’t have any.” 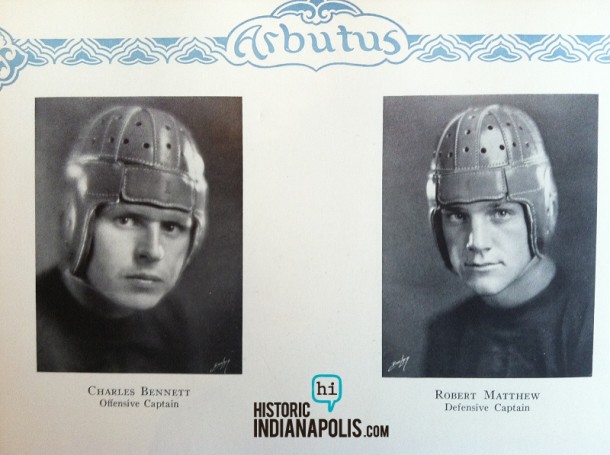 For those not obsessed with all things football, history may be the one connector to the current national pastime. For history lovers and entrepreneurs, the origins of any success story hold intrigue and excitement–even if it is about sports. 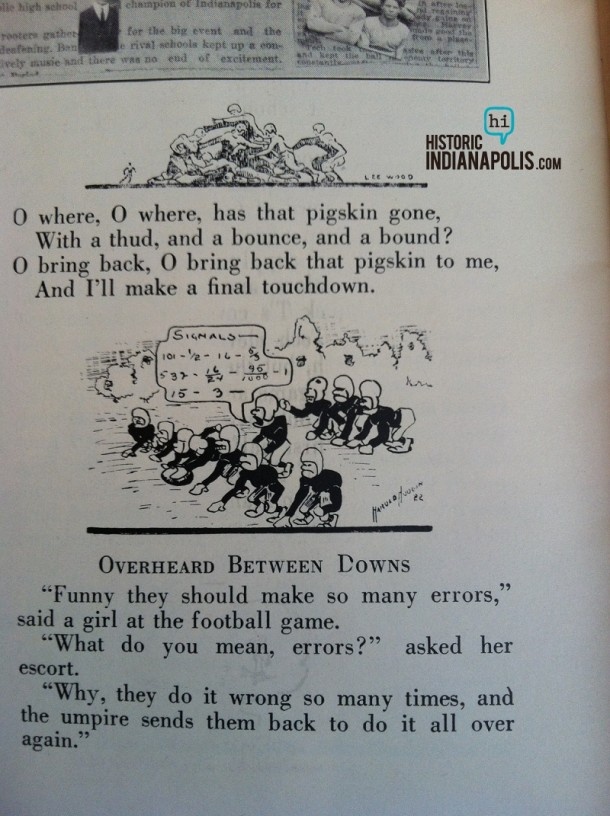 poem and thought from The Arsenal Cannon yearbook, January 1923

Not only were there football teams in Indianapolis 100+ years ago, but other Indiana teams played a noteworthy hand in the years leading into the first version of what would become the National Football League.

Football in general: A mere 4  years after the end of the Civil War (1869), a couple of east coast colleges were the first to play a hybrid of soccer and rugby, which ‘kicked off’ the early development of American football. In 1876, the first rules for American football were written by Connecticut native, Walter Camp (1859-1925), referred to as the ‘father of football’. Colleges and high schools throughout the country quickly embraced the sport. Before there was an official body such as the NFL, an attempt at organization happened in the fall of 1920 in Canton, Ohio– when four Ohio football teams joined together and formed the American Professional Football Conference. Within a month,  a second meeting was held, the name changed to the American Professional Football Association and now included teams from four states: Ohio, Illinois, New York and Indiana! 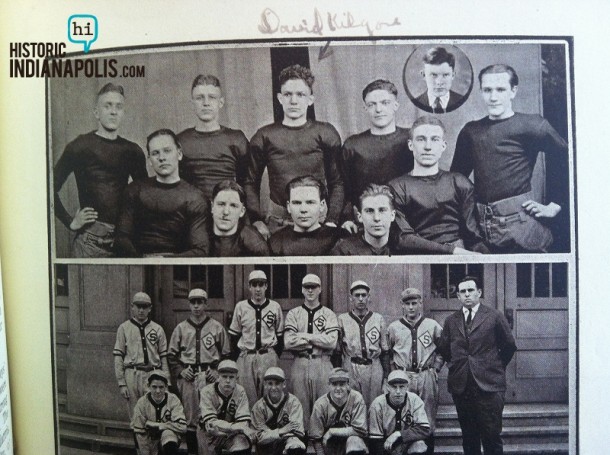 Indiana football:  The Hoosier state mirrored that of other locales, with colleges and high schools having teams established before the start of the 20th Century. The first intercollegiate game of Indiana was played in the spring of 1884 “at the old 7th Street Baseball Grounds in Indianapolis,” (perhaps what would become Bush Stadium? The former 7th Street is now 16th Street) between Butler and DePauw, with Butler winning. (Encyclopedia of Indianapolis)

Of note to football historians, one of its earliest stars, Jim Thorpe, a gold-medal winning athlete of the 1912 Olympics, signed to play for the Pine Village Pros, of Warren County, Indiana in 1913. (Here is a great article about the Pine Village Pros) And when the American Professional Football Association was formed in 1920, Thorpe was elected president of the new organization and Indiana was represented by the Muncie Flyers and the Hammond Pros. Indiana being one of the first four states involved with professional level football–which in the earliest days just meant that at least one of the players was being paid to play–shows the deep and lengthy Hoosier relationship with football.  Therefore, Indiana is long overdue for a Super Bowl. Revisiting the originating states that paved the way makes sense–and you can see the passion for it has not waned in the intervening decades. 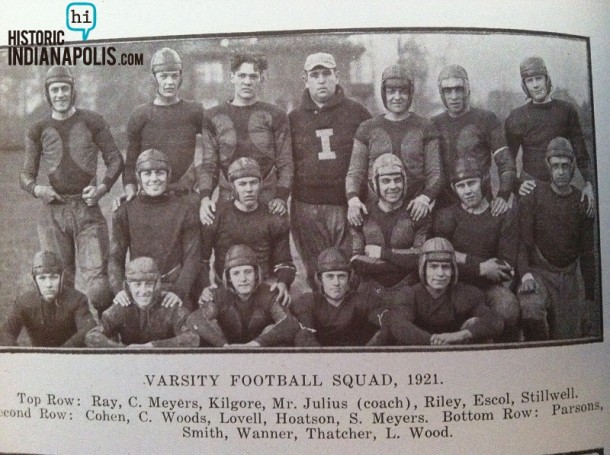 Tracing school games seems fairly easy, but piecing together the early history of non-school related football teams is a challenge. Old clippings make it sound like any group of 11 men could make a football team and go out and challenge teams way out of their ‘league.’ Teams might consist of recent high school grads, college players and any other random men. Clubs with an athletic bend to them were common among the earliest teams in Indianapolis, throughout the state and elsewhere: the YMCA, athletic clubs or as in the case of Indianapolis, even a political club sponsored a team.

Sorting through myriad articles about football in the early 1900’s, it appears Indianapolis’ most active and successful team was through a political (Republican) group called The Marion Club. The Marion Club had their own athletic division and director and participated in a variety of available sports: boxing, baseball (they played the “First Public Game of Indoor Base Ball” at Tomlinson Hall), water polo, swimming, bowling and others–sounds much like the early history of Das Deutsch Haus, with less Germans.  In 1899, Marion Club listed more than 600 members–even former State Senator Albert Beveridge was a founding member. In November 1908, the Circle City’s Marion Club beat the Muncie Flyers in the place where they played most of their Indianapolis home games: “Capital City Park.” It claimed to be the city’s “first athletic park,” located across from the main entrance to the State Fairgrounds. The Marion Club’s headquarters, which they sometimes referred to as the Athletic Club, was in the 200 block of Meridian, just over a block from where the “Athletic Club” of which most Indy residents have knowledge, is still located–as condos. 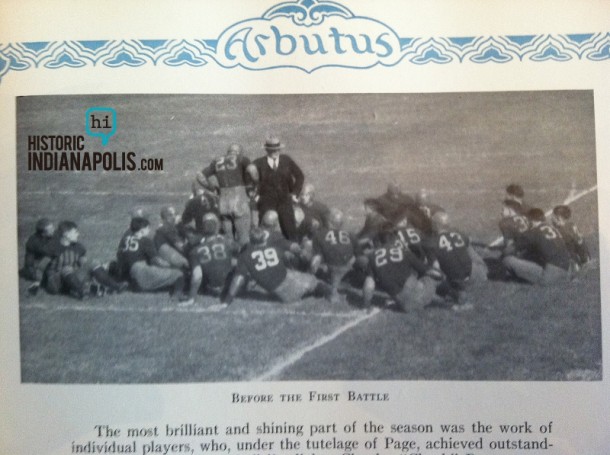 There were also many neighborhood teams; one October 1908 newspaper clipping has football clubs looking for opponents and offering the average weight of the players (140-150 pounds). Among these solicitations to play, Indiana football teams listed: Lafayette Athletic football team; Wabash Athletic Association of Wabash, Indiana; Broad Ripple football team; The Crescent football team; Brooksides;  Mapletons; Second Mapletons. Imagine all our current neighborhoods having football teams to represent us! It’s like a microcosm of how life was before the car and globalization–everything was as localized as possible for the majority and the minority would interact with the world at large. 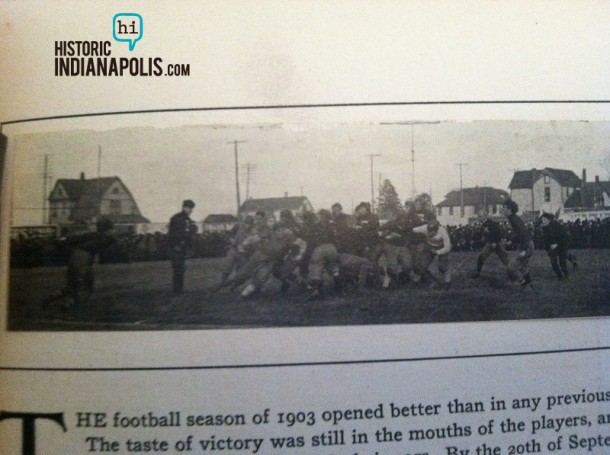 As early as 1915, Indianapolis had an all white versus an all black football team play on the black team’s home turf at “Northwestern Park,” near 30th and Riverside Park, later Thomas Taggart Park.

“The Royal A.C.’s,  the strongest colored team in Indianapolis, and the Tigers, a white team, will clash at Northwestern Park…” (Indianapolis Star, November 28, 1915). The Tigers practiced in Garfield Park at 9am, preceding the 2:30pm game.  Indianapolis had a number of black teams that played locally also. The team must have lasted for some years, as Bowie State University has a poster in their archives from 1937.

So, if you weren’t already convinced by the year-round proliferation of Colts gear and the nearly religious regard Hoosiers hold for the game of football, surely the deep roots of our early football history will persuade you that Indianapolis is an ideal city for the Super Bowl. 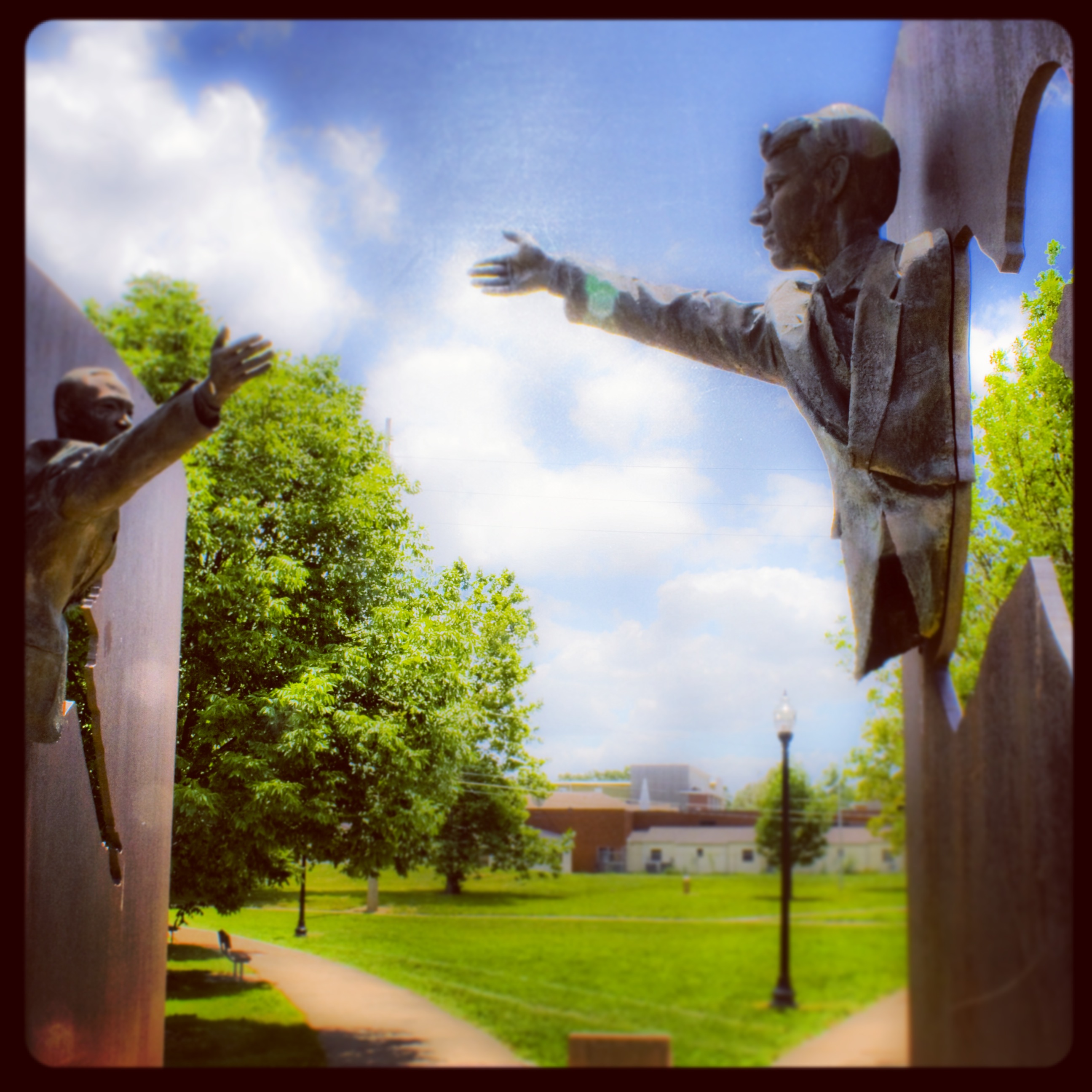