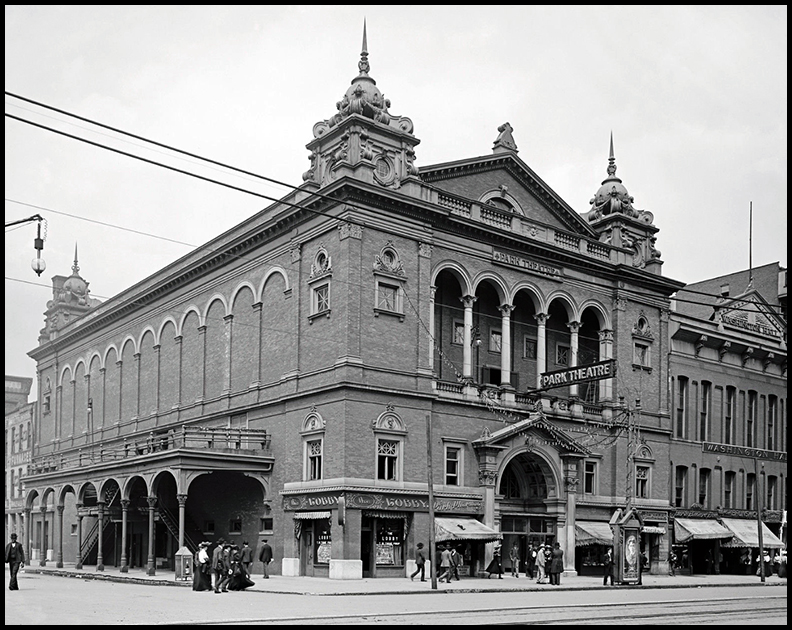 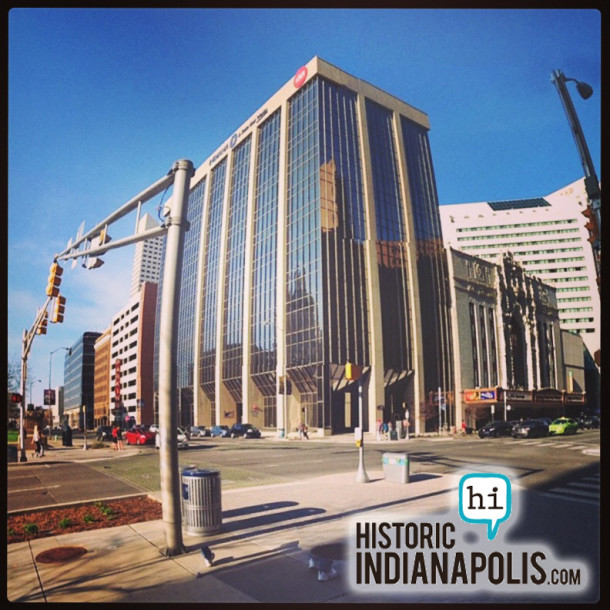 The One North Capitol Building, site of the former theatre known as the Metropolitan, Park, Lyceum, Strand, Park and Capitol   – Photo by Ryan Hamlett

While the Hilbert Circle Theatre and the Indiana Repertory Theatre are the last remaining structures of what was once a vast network of downtown theaters, neither can boast as having been the city’s first. That distinction goes to Metropolitan Hall, which once stood on the northeast corner of Washington Street and Tennessee Street (now Capitol Avenue). 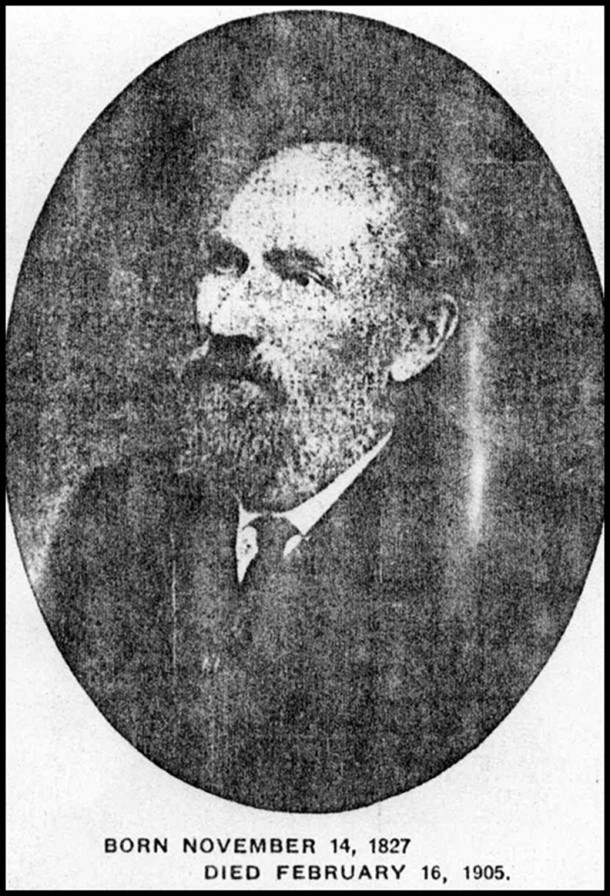 Valentine Butsch from his obituary in the Boulder Daily Camera, February 17th, 1905

For the first few decades of Indianapolis’ existence, regular theatrical entertainment wasn’t on the top of most Hoosiers’ priority lists. When the occasional traveling production would make its way through town, it set up in a tavern, private home, or — after 1850 — the city’s first Masonic hall at the southeast corner of Tennessee and Washington Streets. That was before 1858, when Bavarian-born Valentine Butsch completed Indianapolis’ first building designed for theatrical performances, Metropolitan Hall, on the northeast corner of Tennessee and Washington. 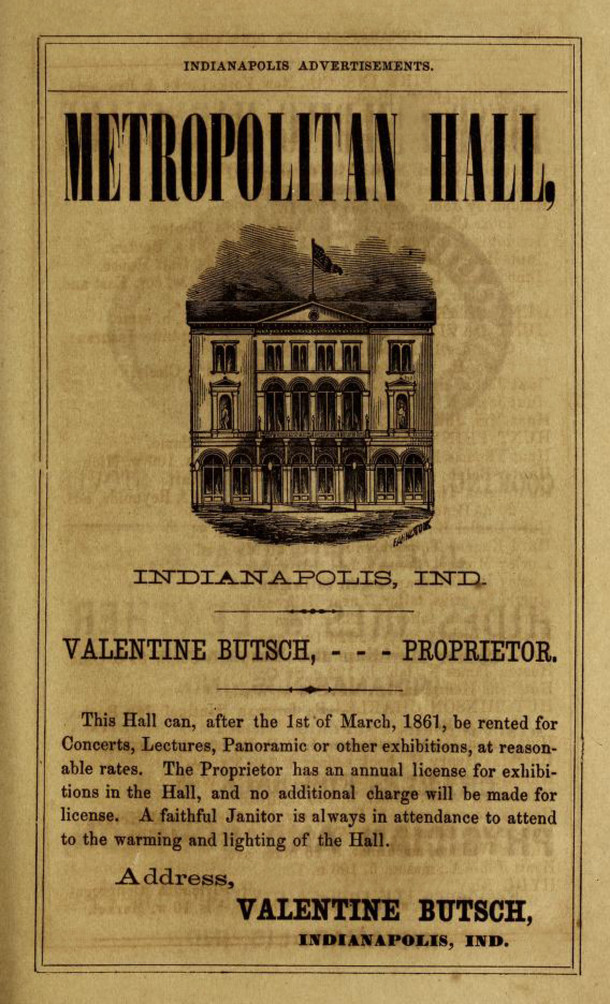 Built at a cost of $60,000, the top two levels of the Metropolitan’s three stories were devoted to its 1200-seat theater, while the street level featured storefronts, a cagey hedging of bets on the part of Butsch. Other theater managers struggled with low attendance and protests by local clergy of the “immoral character” of the theater, so Butsch called his establishment a hall, rather than a theatre. It housed school graduations, club meetings, and ladies’ functions, as well as theatrical productions.  In the early 1860s, as Indianapolis became a staging ground for the Civil War, the Metropolitan was packed with soldiers from the area’s Army camps and later kept up Hoosiers’ morale as the war dragged on. 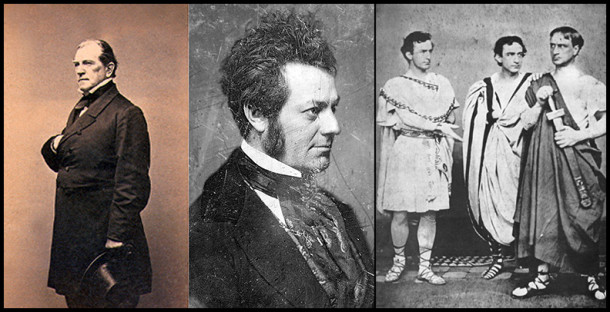 The Metropolitan proved to be extremely profitable for Butsch, but by 1868, he felt it no longer suited Indianapolis’ needs.  He then built a 2,500-seat theater, the Academy of Music, on the southeast corner of Illinois and Ohio Streets.  Metropolitan Hall was renamed Metropolitan Theatre and became more of a “variety house.” 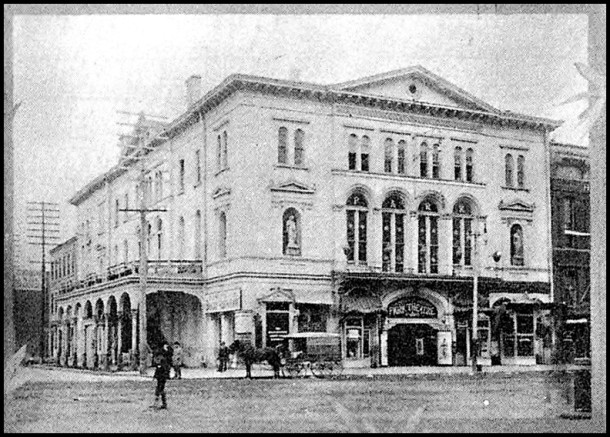 The Park Theatre in 1893  from Indianapolis Illustrated,  published that year.

In 1878, Valentine Butsch, his wife Lena, and all of their children except their recently married oldest daughter Emma, left Indianapolis for Boulder, Colorado.  The Butsches were among Boulder’s earliest settlers.  Valentine Butsch lived out the remainder of his life in Boulder and was buried there in 1905. In 1879, Valentine’s son-in-law, James B. Dickson, and his brother, George A. Dickson, renovated and redecorated the Met and renamed it the Park Theater.  Soon thereafter, George Dickson partnered with Henry Talbott, and the two would come to control most of the top theaters in the city for much of the late 19th century. The larger Grand Theatre drew many of the major theatrical events in town, casting the Park Theatre in the lesser roll of a Vaudevillian theater, with an attached dime museum. 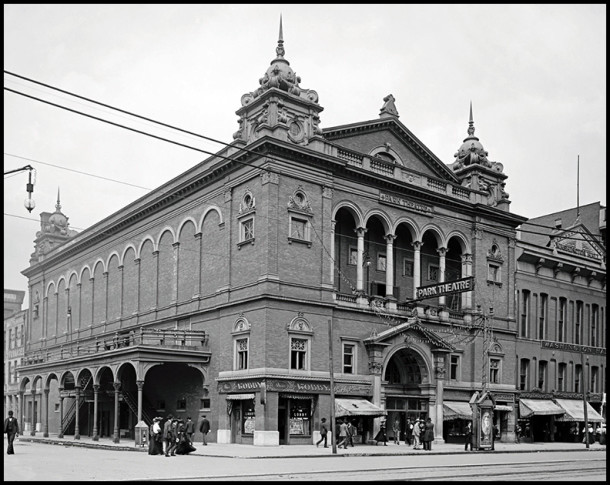 In 1897, The Park was destroyed by fire.  Later that year, the Park was once again resurrected by Dickson and Talbott and would continue operating as a second-tier Vaudevillian theater through August 1913, when it was renamed the Lyceum Theatre. 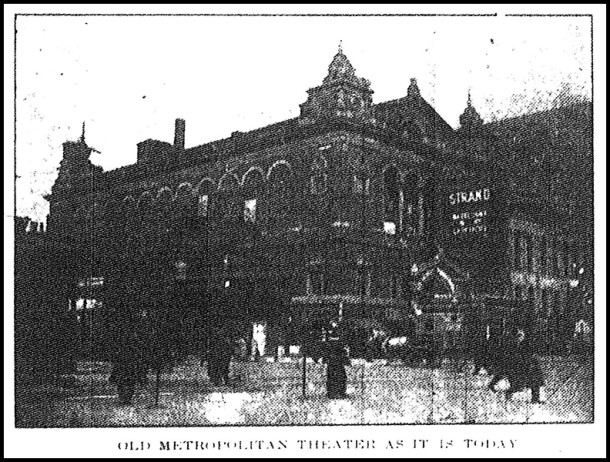 A 1916 photo of the theater from the ten month stretch during which it was called The Strand – Photo from the Indianapolis News February 12, 1916

In 1915, ownership of the old Park Theatre was taken over by the Strand Theatre Company, and under the supervision of its president, E. C. Devine, the theater was remodeled and outfitted to be state-of-the-art. In January of the following year, it re-opened as The Strand Theatre, a name that they thought would stick.  Approximately 10 months later, it resumed its life as the Park Theatre. 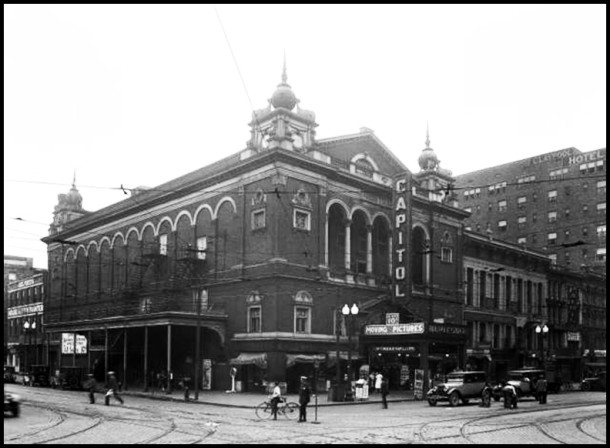 The Capitol Theater, prior to the 1927 opening of the not yet adjacent Indiana Theater – Photo from Cinematreasures.org

In August of 1926, the Metropolitan/Park/Park/Lyceum/Strand/Park Theatre assumed its final moniker, the Capitol, which mixed a variety of Vaudeville and burlesque acts with silent movie shorts. A year later, the majestic Indiana Theatre opened next door, the same year that Warner Brothers released the first “talking picture,” The Jazz Singer, sounding the death knell for small, old movie houses across the country. The Capitol held on until October 17, 1935, when the doors were finally closed for good. 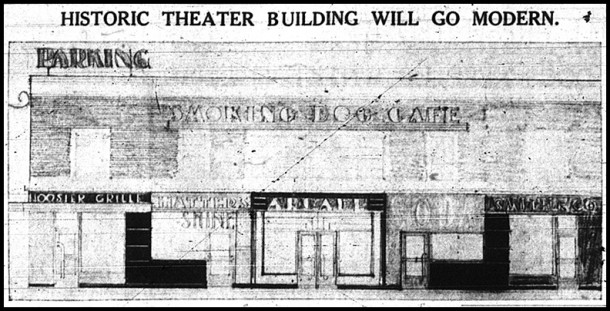 Developers proposed all kinds of modern marvels to fill the void left by the soon-to-be-razed historic theatre. A 16-story hotel was pitched, and a combination storefront/parking structure was designed. 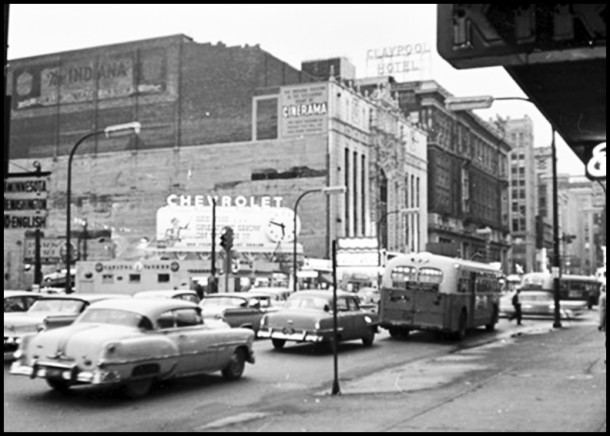 A 1960 photo showing the space left by the razed Capitol Theatre with the Indiana Theatre and Claypool Hotel behind it. – Photo courtesy of Frank Widner

But by the time the above photo was snapped in 1960, it was merely a Chevrolet billboard atop a few smaller shops and a tavern that occupied the northeast corner of Capitol and Washington. Today, the 12 story, golden-glassed One North Capital Building stands in the footprint of Indianapolis’ first theater. 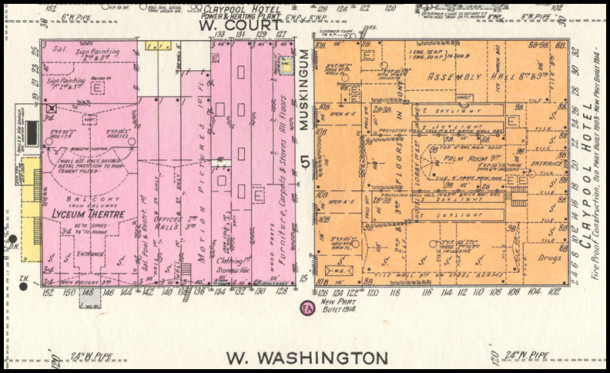 View of the 100 block of West Washington Street depicting the theatre in its Lyceum incarnation. – from the 1915 Sanborn Fire Maps of Indianapolis, 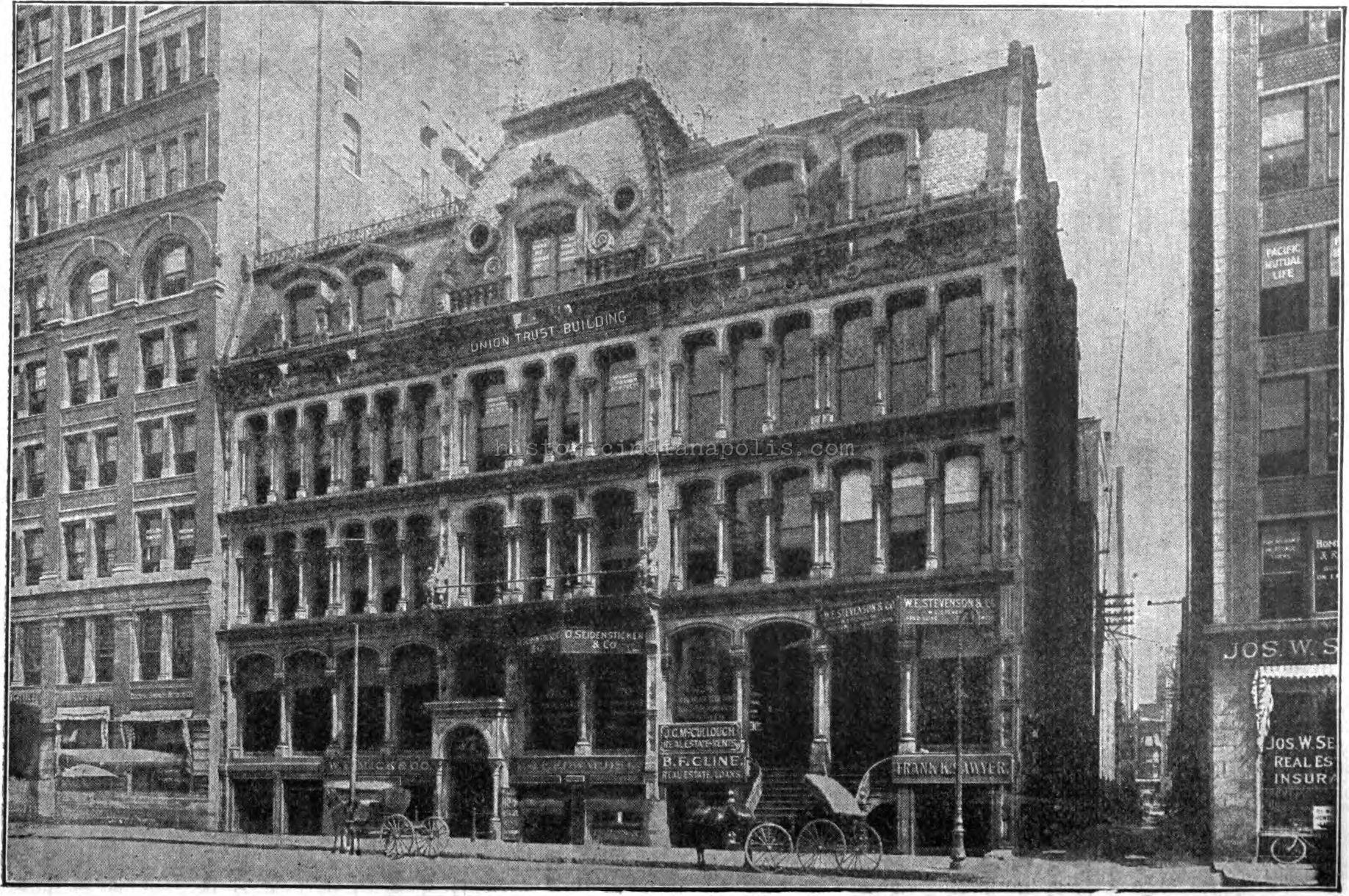