At the request of a good friend, this week’s not exactly picturesque local is the site of the long since demolished Paramount Music Palace at the Washington and 465 interchange on Indy’s eastside. What was once home to Indianapolis’ “Mighty Wurlitzer” pipe organ and scores upon scores of birthday parties was razed in 1995 to make room for a Don Pablo’s mexican restaurant franchise. A Don Pablo’s, which, like its two-doors-down neighbor  Chi-Chi’s, has served its last taco. 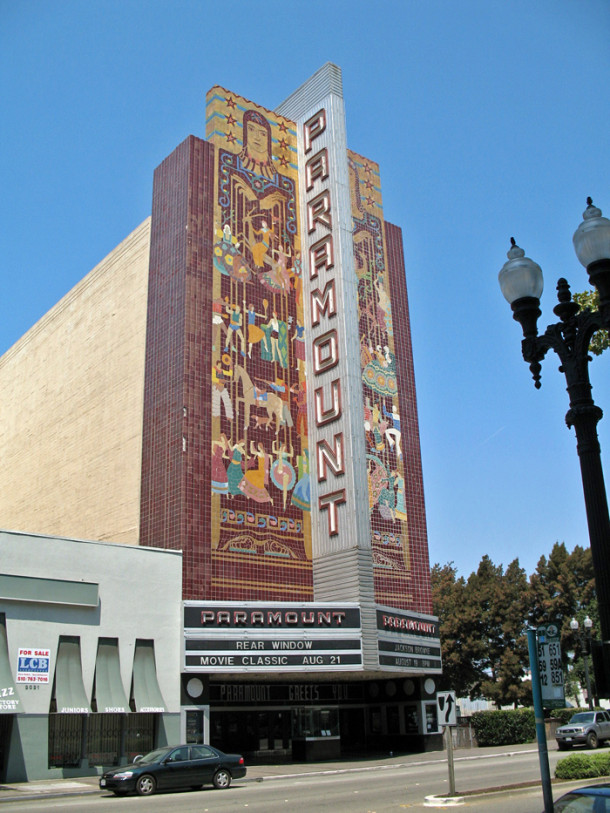 The origin of both the Paramount’s name and its Wurlitzer lay in Oakland, California and the beautiful art deco Paramount Theater. Founded in Cincinnati in 1853, the Randolph Wurlitzer Company began life making a wide variety of musical instruments, but had streamlined its focus to pianos and organs by the early 1900s. As the popularity of motion pictures spread across the country, Wurlitzer built pipe organs specifically suited to silent movie houses, allowing a single organist to function as a one person orchestra complete with percussion and sound effects. However, Oakland’s Paramount theater opened in 1931, four years after the release of The Jazz Singer and the advent of “talking pictures”. So rather than accompany the likes of Buster Keaton and Rudolph Valentino, the $20,000 ($300,000 in 2013 dollars) Paramount organ, called the Publix I (Opus 2164), saw a very brief life as a solo performer and member of the theater’s house orchestra before the Paramount closed its doors seven months after opening, having been unable to meet operating expenses of $27,000 ($413,000) a  week.

The Paramount would re-open the following year, but almost exclusively as a movie house, likely under-utilizing the Wurlitzer gathering dust in its orchestra pit. By the late 1950s, it was finally removed and placed into storage. In 1960, it was sold to Edward and Steve Restivo who installed it as the center piece of “Ken’s Melody Inn, Pizza and Pipes” in Los Altos, California, where it stayed until it was purchased for its Indianapolis destination. Prior to being installed in the Paramount Music Palace, the Publix I was sent to the Crome Organ Company in Los Angeles where it was enlarged from its original 20 ranks (a set of organ pipes responsible for producing one octave or register of a specific timbre) to 42 ranks and rebuilt in the gilded art deco console that patrons of the Music Palace will remember rising out of the stage during performances. 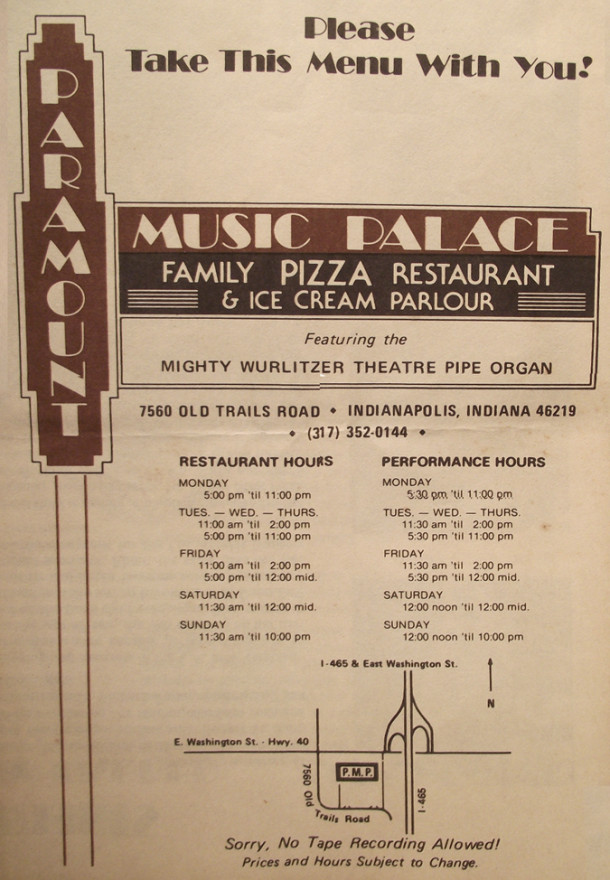 Original paper menu from Paramount recently for sale on eBay.

Several musicians manned the keys of the Wurlitzer over its 16 year stint at Paramount. Two of those listed in the above Paramount menu are still hard at work.

Featured organist Donna Parker has been playing since the age of seven, became the first official organist of Dodger’s Stadium in her native Los Angeles at 16, graduated from California Polytechnic State before moving to Phoenix, Arizona where she began performing at Organ Stop Pizza, leading to a number of stints at other similarly themed Organ/Pizza venues including Paramount. She still performs with two other organists as the group Trip con Brio.

The king of keys was Theater Organ virtuoso and Paramount headlining organist Bill Vlasak. A Columbus, Ohio native and Ohio State grad, Bill also played in California and Arizona before landing the gig at the Indianapolis Paramount that would make him famous, in organist terms. He recorded six albums in the Paramount Music Palace, including “Sentimental Journey” (available at the Central Library on CD, or will be when I return it) before he and his Wurlitzer would have to find new digs in 1995. 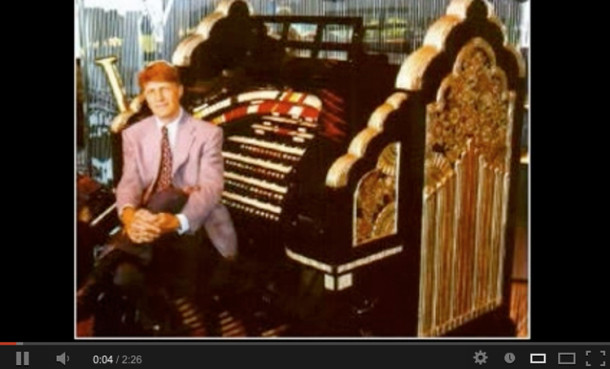 There was no particular urgency for the closure of Paramount in ’95. Though profits were lowish, it wasn’t losing money. Still, the 23 (count them, 23) owners of the Music Palace had been made a generous offer for the property by those who were to open the now vacant Mexican eatery and they chose to take it. This left what to do with the organ. As Paramount prepared to close its doors for good, it was reported that three parties were interested in the Wurlitzer, now being offered at a bargain price of $80,000,  including the Walt Disney Co. and a group that wanted to install it into the Circle Theater. Ultimately, it was sold with the intent of installing it in a music museum in Germany. That plan fell through and the Wurlitzer and Vlasak himself were relocated to Ellenton, Florida where they found a home at the Roaring 20s restaurant, until that too succumbed to declining profits and closed its doors in 2010. Current whereabouts of the Paramount Publix I (Opus 2164): unknown.