When last RWAV headed west, we visited Central State Hospital’s Administration Building in the middle of its restoration and transformation into “Central State Mansion” by Reverie Estates. In the short time that has past, the Mansion is now a vibrant collection of artist studios, co-living spaces, and micro-offices catering to Indianapolis’ student and young creative professionals. As Reverie was completing the rehabilitation process for the “Admin” Building, it also had its sights on the near-by “1899 Building” and the potential it held.

The “Central Indiana Hospital for the Insane” campus as it stood at the turn of the 20th century, from the 1898 Sanborn Fire Insurance Map. (Image courtesy of the IUPUI Indianapolis Sanborn Map and Baist Atlas Collection)

What is now known as the 1899 Building began its life as one of three similarly constructed dining halls, labeled on the circa 1898 Sanborn map above. The building in question, labeled #1 on the map was the northernmost of two that served the men’s building, a smaller Kirkbride-plan facility which was demolished in the early 20th century and replaced with a number of smaller dormitories. 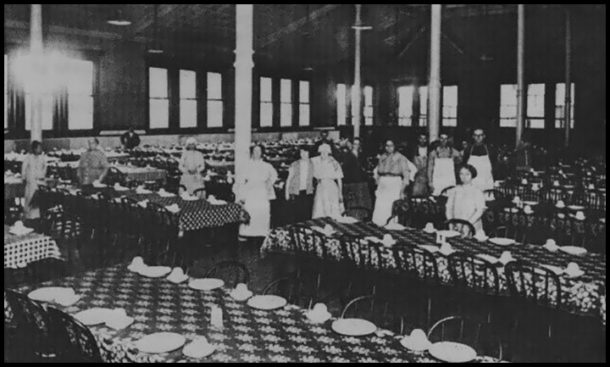 One of the patient dining halls at Central State, though not the 1899 Building, whose windows are in sets of two and not three. (Photo: Indiana Archives and Records Administration) 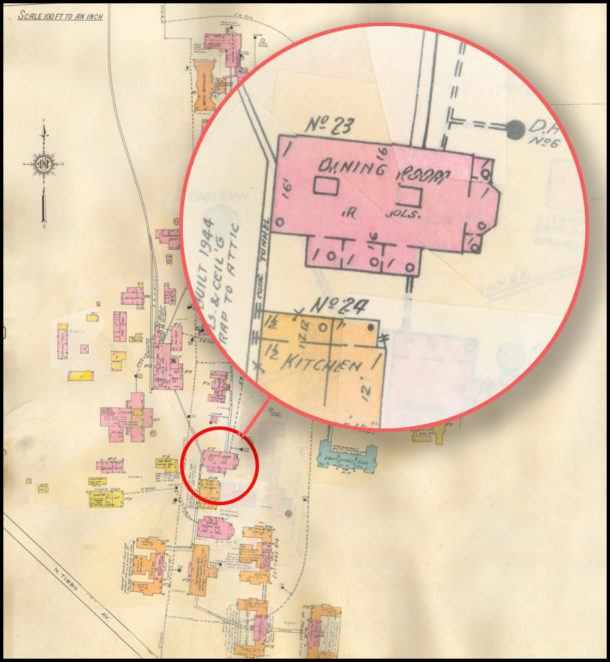 As Central State’s approach to mental health care changed over time, so did the buildings that supported it. Dr. Kirkbride’s “building-as-cure” approach to psychiatric care fell out of fashion and as mentioned, both the staggered winged men’s and women’s buildings were razed and replaced with smaller dormitories. As the main facilities fell, so did many of the auxiliary buildings. A newer dining hall was built just north of the 1899, which became the only dining hall of the four to escape the wrecking ball. 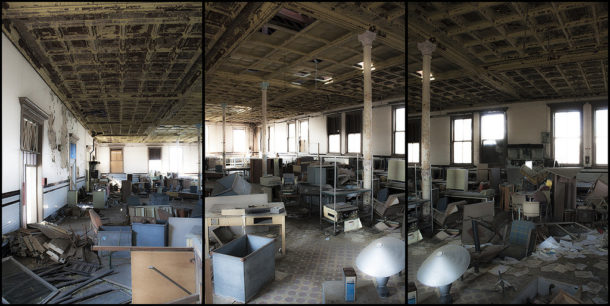 Over the last few decades that Central State was in operation, the former Men’s Dining Hall served as a recreation hall. As Central State closed its doors, the 1899 building became a storage facility for a wide variety of office equipment, furniture, and other evidence of the day to day operation of the hospital. In the twenty years that lapsed between the hospital’s closing and Reverie’s intervention, the 1899 building was in disastrous condition, both inside and out. Vandals had broken windows and strewn the material remnants of Central State throughout the hall, presenting certain urban exploring photographers with excellent, yet unfortunate photo opportunities. 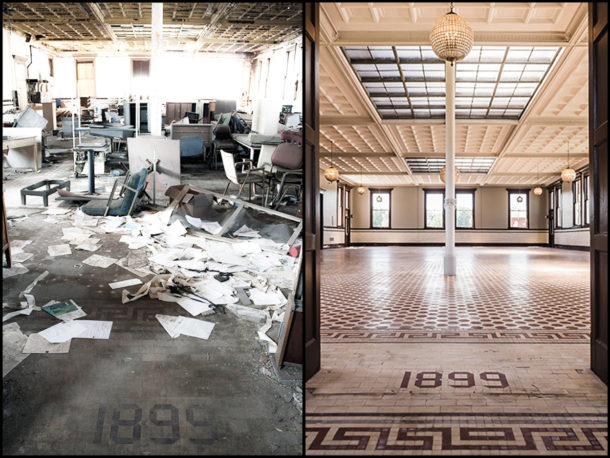 Left: Office furniture and  hospital files litter the floor of the former Men’s Dining Hall (Photo – R. Hamlett) Right: The historic and intricate tile floor has been cleaned, restored, and polished to a high gloss while still showing signs of its age. (Photo: 1899indy.com)

With the help of a $3 million dollar loan from the Local Initiatives Support Corporation, Reverie Estates included the restoration of the 1899 building in its master plan to revitalize Central State’s center campus. The renovation of the Administration Building, as described in the previous article, was successfully accomplished in the fall of 2014. Reverie then turned its sights to the nearby 1899 building and the potential offered by its open space. 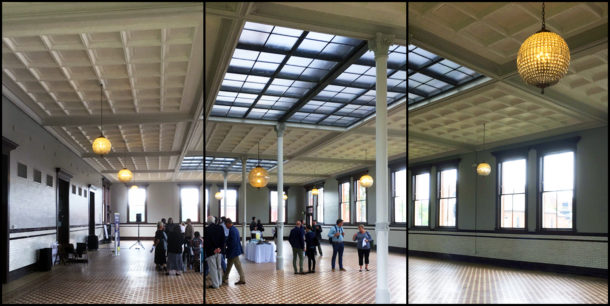 Workers hauled away the accumulated refuse, repaired the building’s leaking roof and original skylights, restored and repointed its brick exterior, and replaced the worn and broken windows. Best of all, great care was taken to retain the intricate tile floor, making repairs where needed but also allowing the wear and patina of age to reflect the building’s longevity. 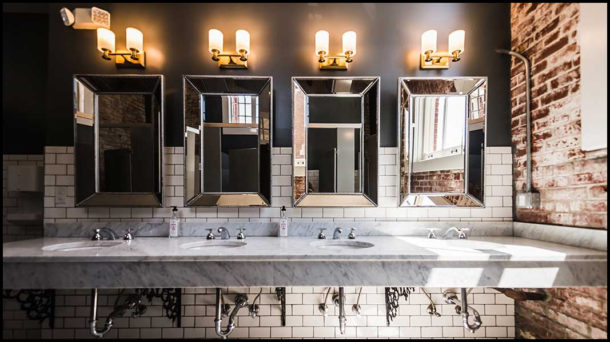 Original details from the building, incorporated into contemporary design in the Women’s restroom. (Photo: 1899indy.com)

Today, the beautifully restored 1899 Building is available to rent for events of all kinds and features edible delacacies by Indianapolis’ Hoaglin Catering. For information on the hall’s availability, catering packages, and contact information, please visit 1899indy.com.

This article was created for Reverie Estates with thanks for their sponsorship of this site. 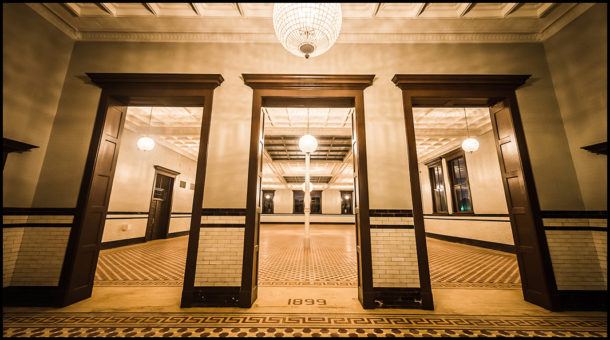 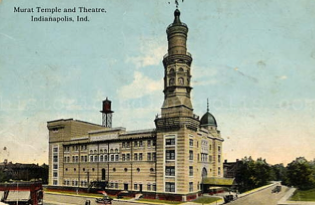