Then and Now: 30th and Illinois – The Children’s Museum of Indianapolis

Locating historic photographs of certain intersections in Indianapolis is nearly impossible. They are either off the beaten path, building owners had not hired professional photographers, or existing collections have not yet been located. And sadly many photograph collections have been ~shudder~ discarded. So as a photo historian I’m thrilled when new collections become available to the public. I imagine that the photographer who documented power lines for Indianapolis Power and Light in the 1920s and ‘30s would be amused to find his utilitarian images enjoyed for historic purposes ninety years later.

These two historic photographs come from the collection of Dee Dee Davis, who loaned them to IUPUI’s University Library for scanning. The album contains Indianapolis Power and Light photographs from 1927, 1935, and 1936 documenting the consolidation of power lines, which by the 1920s visually cluttered the streets. In about 1935 IPL reduced the number of lines and eliminated or cut off many of the wood poles, usually on just one side of the street. 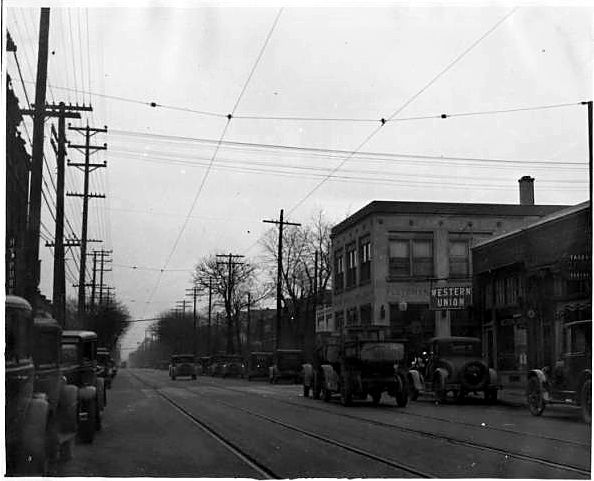 In 1927 the IPL photographer aimed his camera north on North Illinois Street at the intersection of West 30th Street. This appears to be a “before” picture of the electric poles. Visible businesses on the east side of Illinois Street include Western Union, Fletcher Savings and Trust Company, and the Tasty Bakery (listed as the Frank R. Knoth restaurant in the 1930 city directory). Note the streetcar tracks and the overhead wires directly above them for electric trolleys. (Courtesy of Dee Dee Davis, IUPUI University Library, Indianapolis Power and Light Co. Distribution System Photographs) 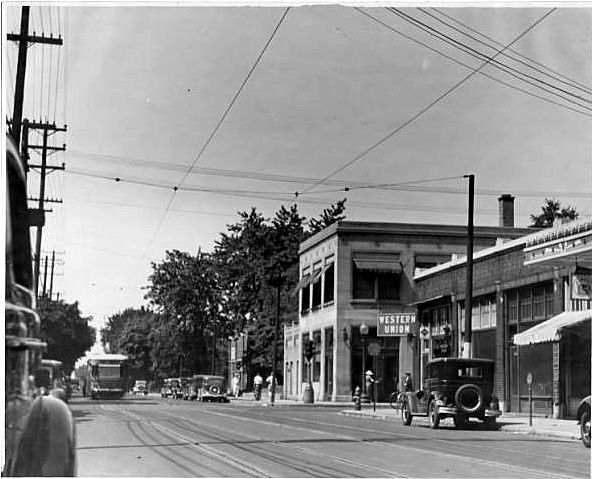 The same scene was rephotographed in 1936 after the tops of some of the wood poles have been chopped off. The Fletcher Bank has been spruced up with new awnings and different signage. Western Union remains on the southeast corner and the city directory does not list a restaurant, but a sign advertises some product as “ALWAYS 15” cents. (Courtesy of Dee Dee Davis, IUPUI University Library, Indianapolis Power and Light Co. Distribution System Photographs)

Do you have any observations that I missed? 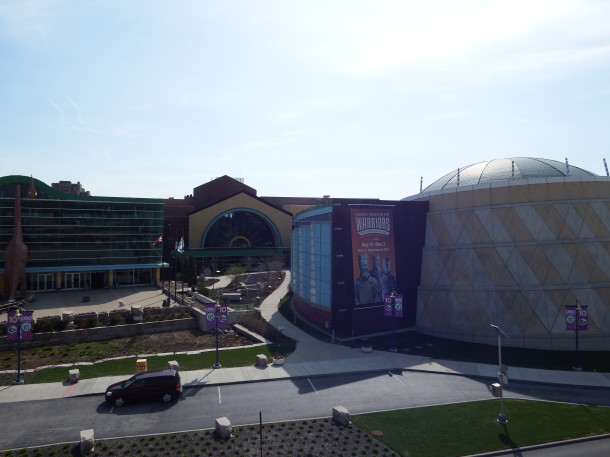 I’m always curious to type the street names into Google Street View to discover what currently exists on the site. Today, dinosaurs burst forth from the “Dinosphere” to welcome visitors to The Children’s Museum of Indianapolis. The rounded structure was converted into the Dinosphere exhibit from an existing CineDome large-format IMAX theater in 2004. (Google Street View, 2009)

Since Georgia has been on my mind as city leaders contemplate a new name for Georgia Street, I could not help notice the creative signage at this intersection. The official names are “Illinois Street” and “30th Street,” but the streets have alternate names in honor of the dinosaur exhibit. “T. Rex Trail” and “Gorgosaurus Avenue” are seen on smaller signs. Perhaps the city could make the disgruntled public happy by branding the new Georgia Street public venue in this manner, or via banners, and leave the historic street name on the books. (Google Street View ca. 2009)