Court Street is one of those funny downtown alleys that somehow became a street. The short street runs east and west between Market and Washington Streets in the downtown area. An oft-told tale has it that taverns and saloons were prohibited from operating in Indianapolis alleys, so the easy work-around was to reclassify some of the alleys as streets. Sounds feasible, but does anyone have a source for this tidbit or is this just folklore?

The view shown here hints at the thriving street life somewhat hidden from view. This stretch of the 100 block of East Court Street hosted businesses such as restaurants, a barber shop, Centennial Press, Martin Signs (formerly Orn and Powell), apartments, as well as an occasional poker room. In past years, however, Court Street had a reputation as a seedier part of town. A curious reference by Indianapolis historian Jacob Piatt Dunn refers to a Court Street theater in about 1870. He states that there were only three theaters in Indianapolis, then clarifies that they were the only decent theaters: The city was not without its temple of dramatic obscenity after 1869, when the first one was opened on Court street between Delaware and Pennsylvania. He likely refers to the bawdy burlesque-style performances becoming popular in America at that time.

George S. Cottman calls the area near Court and Delaware Streets “Dogberry Row” in his 1911 Indiana Magazine of History article titled “Old Time Slums of Indianapolis.” He states: “Dogberry Row” designated the dens of “justice” scattered about Court and Delaware streets near the courthouse, which, about 1882 were infamous for robberies under cloak of the law. People too poor and ignorant to help themselves were brought into these justice of the peace courts on trumped-up charges and always fined, the scheme being to secure costs. Blackmail was levied on houses of ill-fame, which paid weekly sums to prevent raid, and cases were often tried by night to avoid publicity and newspaper exposure. The constables are said to have all been criminals, though why this charge should be confined to the constables is not apparent. This nickname likely came from the character Dogberry, the comic night constable in Shakespeare’s Much Ado about Nothing. 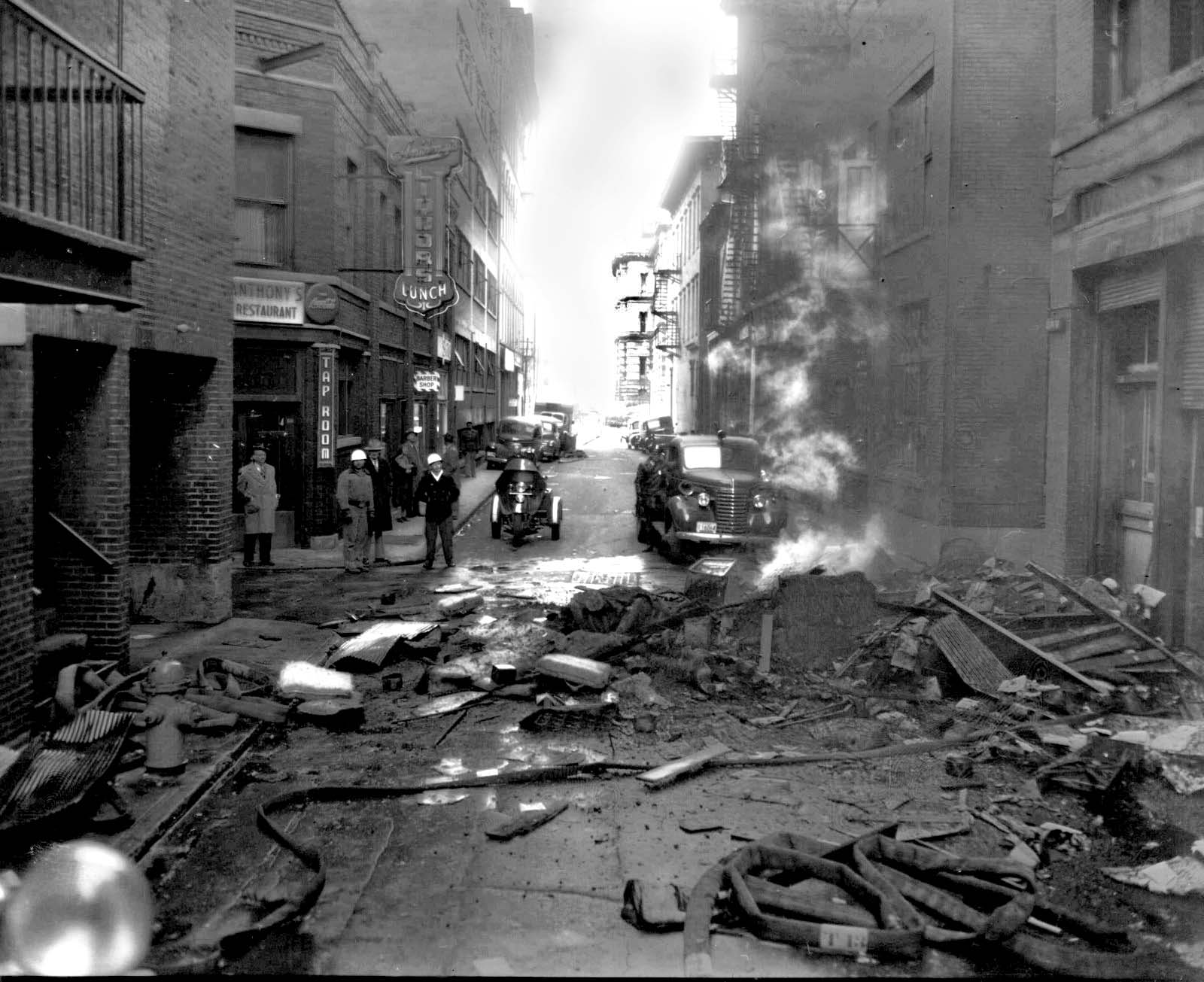 Smoldering remnants of a nearby fire are documented in this 1952 view of East Court Street, looking east toward Delaware Street. Workers and spectators stand at the entrance to Susquehanna (now Talbott) Street. Branding and name consistency clearly were not as important then, for the corner restaurant is covered in signs reading “Anthony’s Restaurant,” “Tap Room,” and “Anthony’s Liquors Lunch.” It was also known as Anthony’s Café. Lack of parking was not an issue since the tavern was in close proximity to hundreds of downtown businessmen working at the Marion County Court House (seen in the distance) and in banks and law, real estate, and insurance offices. To the right are Vonnegut Hardware and the Union Trust Company (formerly Meyer Kiser Bank). Through the years, other businesses with their backs to this little-known street include the Marion County State Bank, the Delcourt Building, Fidelity Trust Company, and the Public Savings Building. (Negative was made by an Indianapolis Fire Department photographer on December 6, 1952) 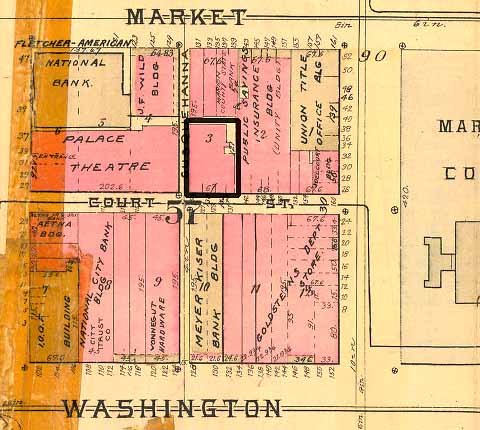 The Hoffman/Anthony Restaurant, seen here in a 1927 Sanborn Fire Insurance Company map, operated in a two-story, freestanding brick building. Although the map indicates three stories, this must have included the basement since newspapers and photographs depict a two-story structure. West of the restaurant stood the Loew’s Palace Theatre. To the far right is the Marion County Court House. (Indiana Sanborn Map and Baist Atlas Collection, IUPUI Digital Collections) 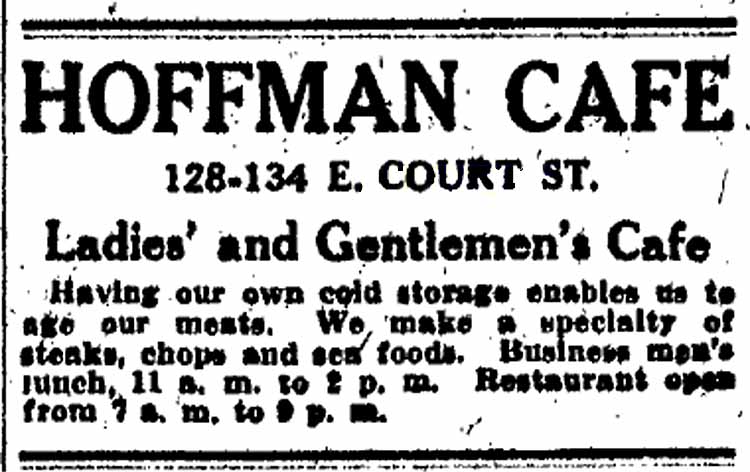 For over half a century, a restaurant and tavern stood on the northeast corner of Court and Susquehanna (now Talbott) Streets. Opened in 1902 as Frank Hoffman’s Café, the spot was popular with politicians, lawyers, actors, and prize fighters. When famous jazz singer Al Jolson played Keith’s Theater, he entertained restaurant customers between sets. This was also a favorite haunt of Indiana Senators Jim Watson and Albert Beveridge and Democratic Party boss and Indianapolis mayor Tom Taggart. One can almost imagine a smoke-filled atmosphere where backroom deals were made. During the Prohibition era (1920-1933), restaurant ads stressed the sale of soft drinks.

Upon reports of the building’s closing and demolition in 1958, newspapers recalled that when Hoffman’s opened in 1902 it was one of the city’s finest restaurants with the largest dining rooms downtown. Eventually the upstairs dining rooms were converted into eleven apartments. For nearly two decades, Wilbur P. Fuller operated a small barber shop in the same building just east of the restaurant, and by 1949 Mrs. Florence Golding was the barber. A large basement was rented out to gamekeeper Fred Leopold…at least until the poker room by busted by local police in 1911. Other owners of the popular eatery included Oscar Barthel (1915-1918), Jake Schuller (1918-1927), Tom Buskirk and Chet Berry (1927-1933), Anthony Rosecrans (1933-1955), Nick Oltean, and Ralph Helms (late 1950s). In 1958 the restaurant building and the adjacent brick structure at 131 East Market Street were owned by Douglas Jillson and his sister Mrs. Anne Frenzel, who decided to demolish them to create a parking lot. 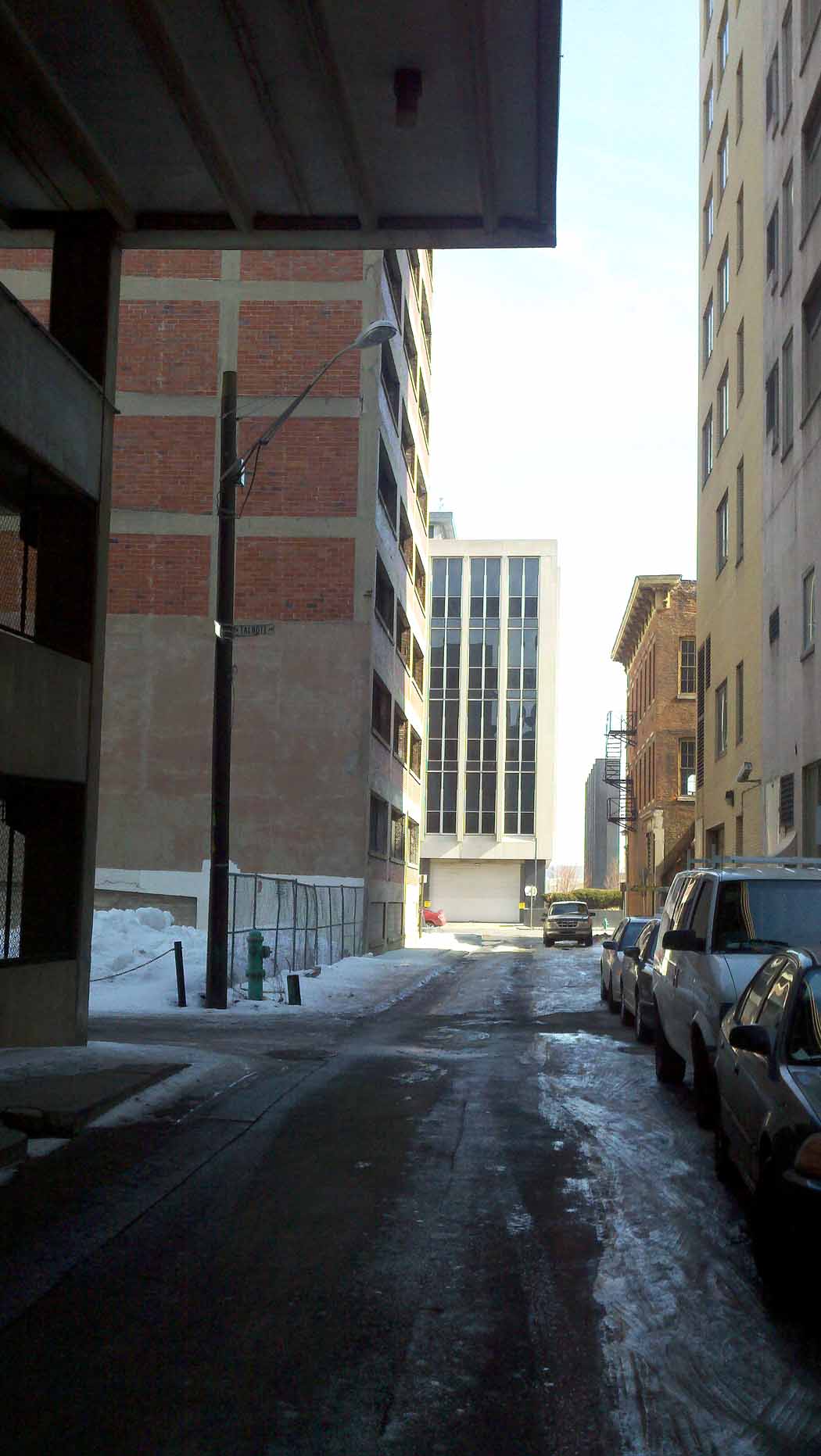 Court Street today serves mainly as a back entrance to Washington and Market Street buildings. The site of Anthony’s Restaurant is a surface parking lot tucked-in between the Penn Parking Garage and the Indiana Parking Garage. The City-County Building is in the distance. (Photograph by Joan Hostetler, February 11, 2011)