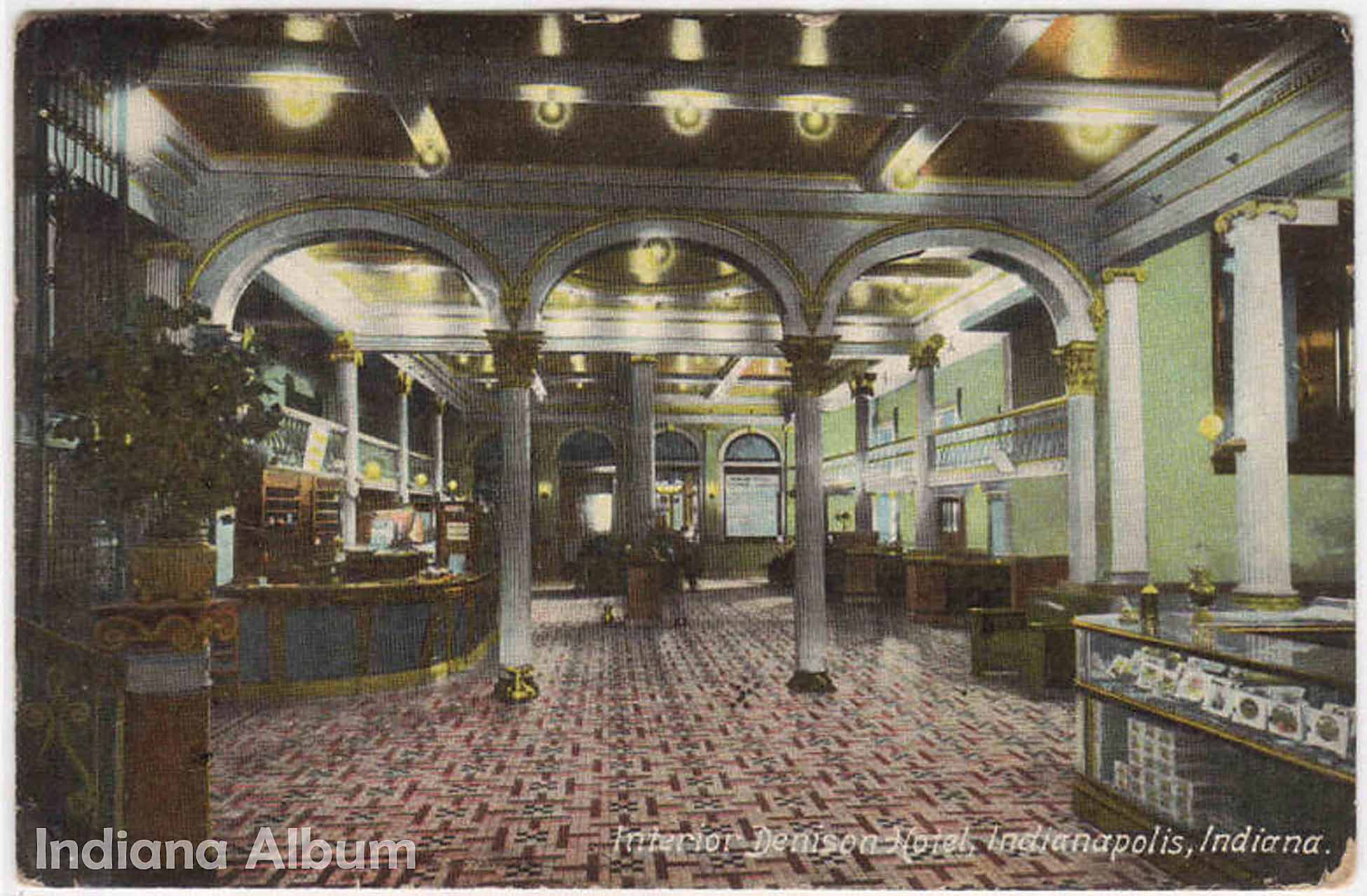 Although less known today than other Indianapolis hotels that survived later into the century, the Denison Hotel was considered one of the city’s finest. Despite shaky beginnings, the Denison stood for over fifty years on the southeast corner of East Ohio and North Pennsylvania Streets. In 1870 a group of investors started to build a large hotel, but the construction was not “vigorously pushed” and the project languished. The unfinished, four-story brick structure was nearly destroyed by fire in 1874. A few years later, political mover-and- shaker John C. New, along with Cincinnati businessman John M. Denison and a few others, bought the ruins and built a hotel much more elaborate than originally conceived. Although it was officially named the “New-Denison Hotel,” after the principal investors, it was more commonly referred to as the “Denison Hotel.” 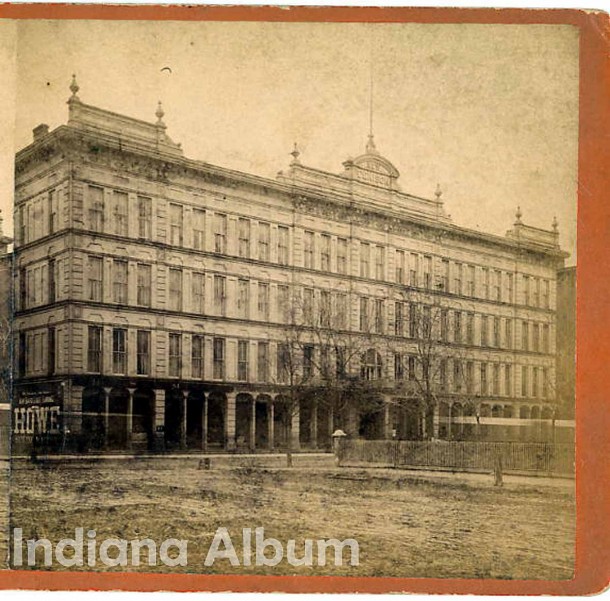 This partial stereoview shows the Pennsylvania Street façade of the New-Denison Hotel shortly after it opened in January 1880. (Indiana Album/Heritage Photo & Research Services) 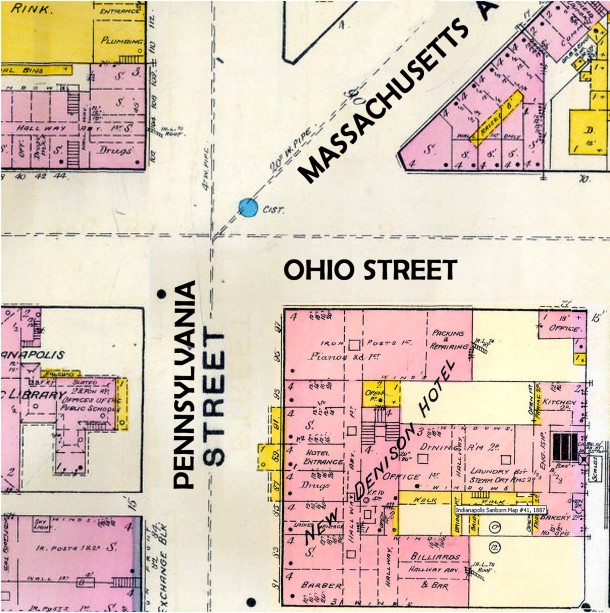 Located at the intersection of Pennsylvania and Ohio Streets and Massachusetts Avenue, the 250-room hotel thrived. It featured restaurants, billiards, a bar, a drug store, and a separate ladies’ entrance. In the 1880s and ‘90s the Republican Party often gathered at the Denison and President Benjamin Harrison often met with local residents in the dining room when he returned to Indianapolis. The hotel’s importance as a political gathering spot is perhaps best illustrated by Indiana’s legislative minutes from February 1895: “The rules were suspended for the passage of the bill, and, while it was being read the third time, the House was notified that the Denison Hotel was on fire and adjourned in a stampede.” 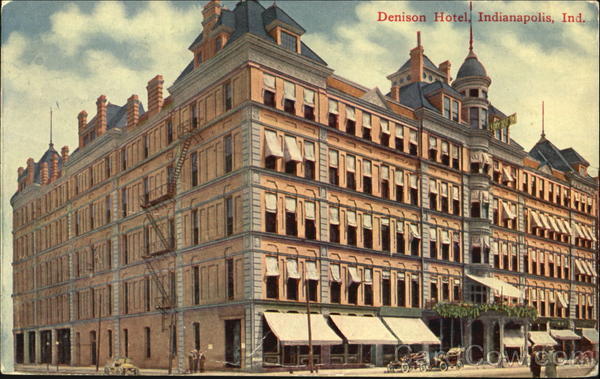 The hotel suffered extensive damage in 1895, but none of the 300 guests were injured. It was quickly rebuilt and enlarged to six stories. By 1897 the hotel had been practically rebuilt and redecorated. Management claimed that “the wood work in its construction has been taken out and replaced with iron, steel and marble, all gas fires have been replaced with steam, which renders the Denison as nearly fire-proof as possible in every respect. There are over 400 handsome and well furnished guests’ rooms, 200 of which are en suite, with private bath. The judges of the U. S. court and their families as well as those of the supreme court make their home at the Denison.” This Denison Hotel postcard is postmarked 1916. 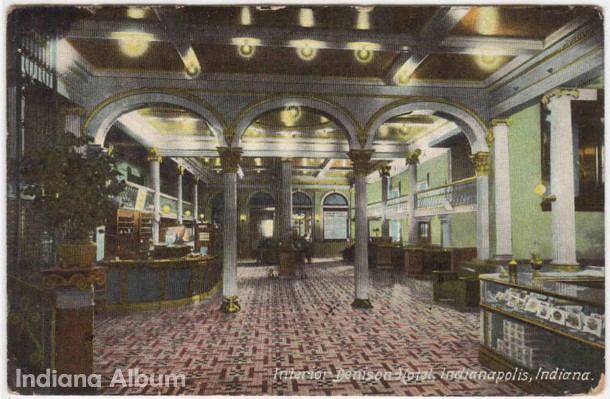 The lobby of the Denison Hotel as it appeared circa 1915. After political leader Thomas Taggart took ownership of the hotel, politics shifted from Republican to Democrat, but both parties continued to use the hotel and banquet facilities. According to the Encyclopedia of Indianapolis, the hotel was used heavily during legislative sessions for closed-door negotiations and party caucuses. “Political schemes were hatched in Parlor A on the second floor or in the ‘Amen Corner,’ a secluded nook in the lobby.”

In the late 1920s Norman A. Perry and his sister Ruth (Perry) Griffith, heirs of Charles Coffin Perry, bought the financially troubled hotel due to its busy location. Striving to make the busy corner profitable, they astutely recognized the city’s need to accommodate more automobiles and razed the old hotel in 1933 for a parking garage. 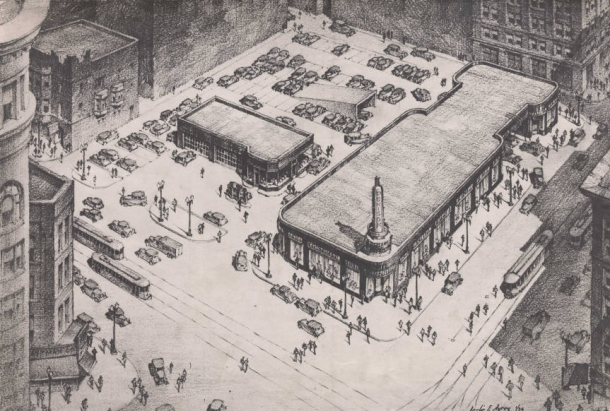 William C. Griffith and his wife Ruth (Perry) Griffith developed one of the earliest paid parking facilities in the country in 1934 and named it Denison Service Parking after the old hotel. Architects Pierre and Wright of Indianapolis designed phase one of the parking facility, which included a garage, filling station, and car wash. A ramp in the parking lot appears to provide access to underground parking. 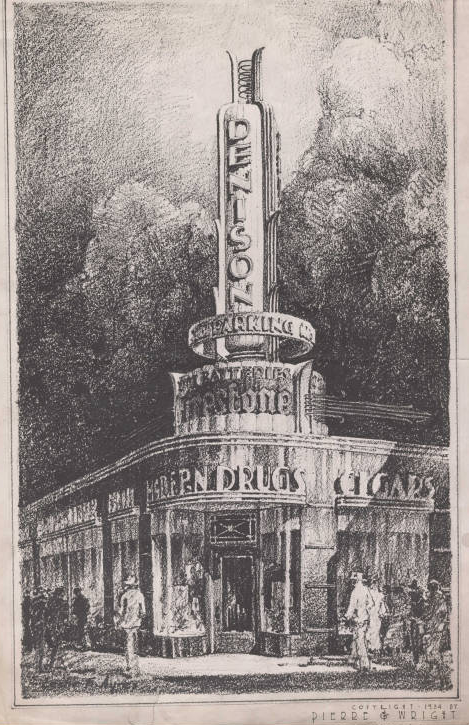 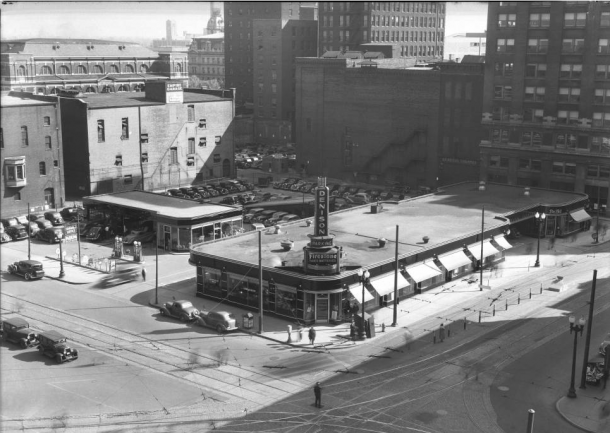 This view looks southeast at Denison Parking with Tomlinson Hall and the Marion County Court House in the distance. The larger building to the right provided rental income from Firestone Tires, hat and fur stores, a restaurant, and a bar. 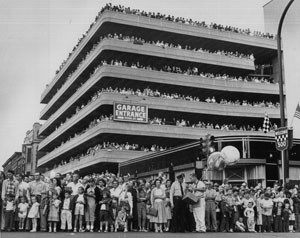 In 1954 the Griffith family constructed a seven-tier, cast-in-place continuous ramp parking garage for 650 cars. Read more about the history of Denison Parking  in Lots of Parking: Land Use in a Car Culture by John A. Jakle and Keith A. Sculle) 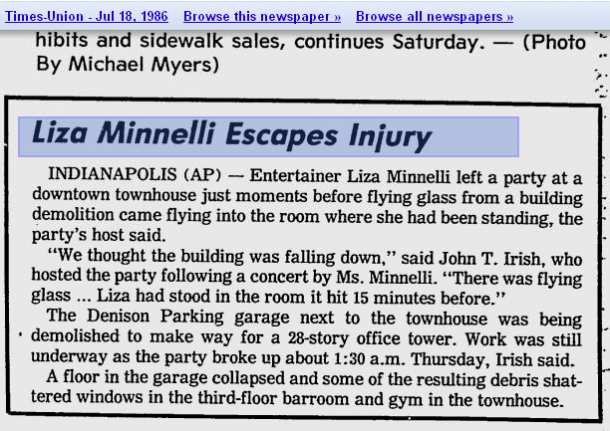 The Denison Parking Garage was demolished in 1986…and Liza survived (whew!). 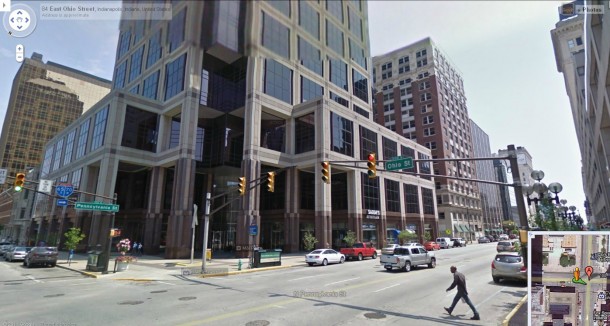 In 1988-89, First Indiana Plaza was built on the site. The 31-story postmodern skyscraper, featuring blue glass windows and red polished granite, housed the headquarters for First Indiana Bank until it was purchased by M&I Bank in 2008. Today, the M&I Plaza houses many businesses including CVS Pharmacy, M&I Bank, and Sahm’s at the Plaza. (Google Street View, 2009)

View more photographs of the Denison Hotel and Denison Parking Lot from the collections of the Indiana Historical Society and Ball State University.