As a photographic researcher, part of my job is to help people or companies find and license photographs for books, movies, exhibits, or personal research. Subjects range from the easy and obvious (the downtown L. S. Ayres building in the 1920s), the abstract idea (image of a 1910s barber shop where the barber is using scissors, preferably blurred to show movement), or the technical and very specific (office workers using a Digital Equipment Corporation PDP-11 computer in 1970). With any luck, I can find the required images in archives, libraries, and increasingly through online searches on sites such as Flickr, stock photo companies, and the myriad of nostalgia and history sites on Facebook.

I suppose I should brag that photographs are located through great skill, visual literacy, knowledge of public and private photograph collections, and years of personal contacts (which is partially true), but sometimes it just comes down to serendipity. Quite often, locating a requested image is like finding a needle in a haystack. You just know that the photo exists in someone’s attic or basement or on a dusty shelf in an antique shop. I’ve even found images framed as decoration in restaurants and have requested to copy the image through the glass. So I liken my job to being a “photo sleuth.”

This week’s photo is one of the many unofficial (meaning unpaid) requests that gets filed in the back of my brain. I’m not sure what I ate for breakfast today, but somehow I can remember that Evan Finch is looking for a picture of the Torch Restaurant (now La Hacienda), Mary O’Neal wants to find an illustration of William Willard’s house (founder of the Indiana School for the Deaf), and Nathan Bilger seeks an old photo of the George Alig house at 1608 Park Avenue. Yesterday, dumb luck led me to Nathan’s desired image while I was working on another project. 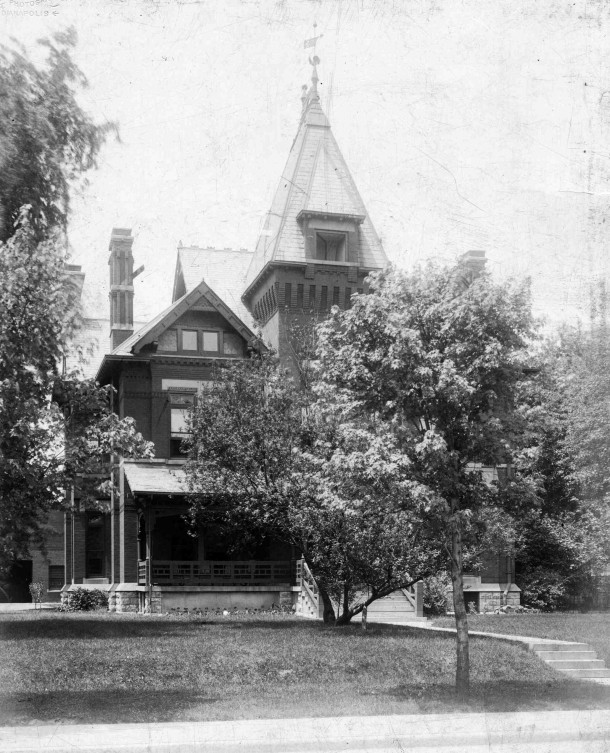 In April 2011, Nathan wrote an article here on Historic Indianapolis about a gas station at 16th and Park. He ended with a wish to find a photo of the Alig mansion at 1608 Park Avenue. Luckily, descendants posted many photographs of the home and family of George and Cornelia (Schirmer) Alig on Ancestry.com, a subscription genealogy web page. I won’t give too much information about this brick house in case Nathan is researching the property for an in-depth article; rather I will share one tidbit. The home, previously owned by Senator (later Vice President) Charles W. Fairbanks) was occupied after about 1901 by the family of George Alig, Sr. (1852-1941). Alig was a native of Switzerland who immigrated to Indianapolis and acquired his wealth as owner of the Home Stove Company. One descendant recalled, “My mom remembered George Alig laying in bed, yodeling in this house, when he was getting old and not well and missing the Swiss Alps. I think the living room was painted to look like the inside of a Swiss chalet.” (Circa 1910 photograph posted on several pages on ancestry.com, originally posted by Resa Rivers, 2008) 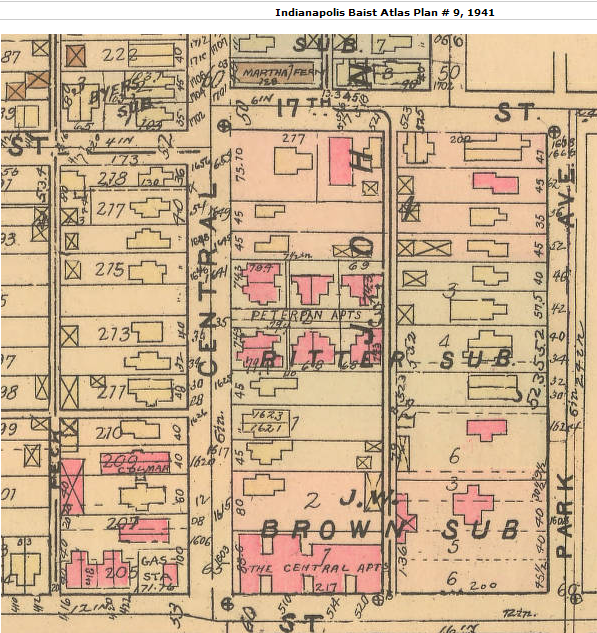 The Alig house, along with a large brick stable or carriage house (as seen in the background of the photo), appears in the lower right corner of this 1941 Baist Map. (IUPUI University Library) 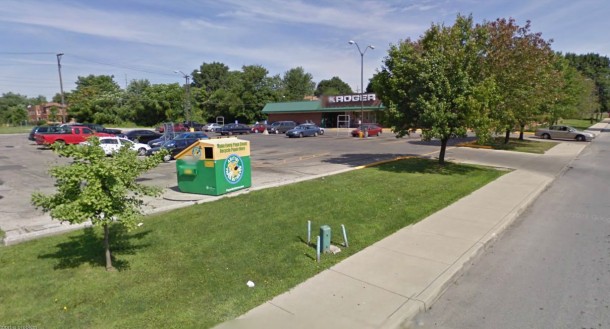 Sadly, the Alig house was demolished in about the 1960s and today is the site of a recycling bin and Kroger parking lot on the northwest corner of E. 16th Street and Park Avenue. I hesitate to share, yet another, example of a grand house replaced by an empty lot. However, my point is that we should be happy that the memory lives on in family stories and photographs. Too often, photographs get lost or passed down through only one branch of a family and third cousins twice removed no longer have access to these visual treasures. I’ll share more details in the future about my dream to create a digital online registry of historic photographs, tentatively called “The Indiana Album.” If you would like to participate in a focus group and brainstorm about how to accomplish this ambitious project, please contact me and share your ideas in the comments. (Google Street View, 2009)