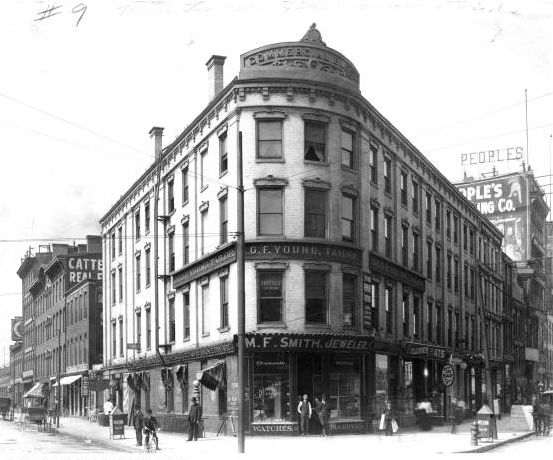 The corner of West Washington Street and Kentucky Avenue was once the site of the four-story Commercial Block. In 1906 the building housed various businesses including M. F. Smith, jeweler, and the tailor G. F. Young. The building was demolished in the mid-1910s to make way for the Hotel Lincoln. (W. H. Bass Photo Company Collection, Indiana Historical Society, May 1906) 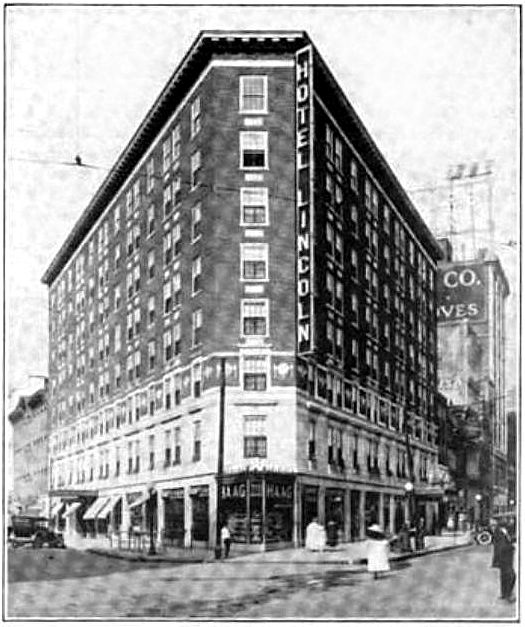 The Hotel Lincoln was constructed in 1918. The architects, Rubush and Hunter, were part owners along with banker Albert E. Metzger. Although designed as a fourteen-story building, economic difficulties of World War I necessitated constructing the hotel in two phases. The owners originally built eight stories and added six floors in 1921. Architects described the style as “simple Adams type.” The first two floors were faced with granite. Terra cotta trim enhanced the tan and brown bricks on the upper floors. (The Hotel Monthly, August 1918. Another view, taken at the same time, can be seen at the Indiana Historical Society)

The hotel was named after Abraham Lincoln. Capitalizing on Abraham Lincoln’s 1861 speech from the balcony of the Bates House across the street, the owners often called the larger area near Washington and Illinois Streets and Kentucky Avenue “Lincoln Square.” This bust of Abraham Lincoln stood on a marble column in the lobby of the hotel. (The Hotel Monthly, August 1918) 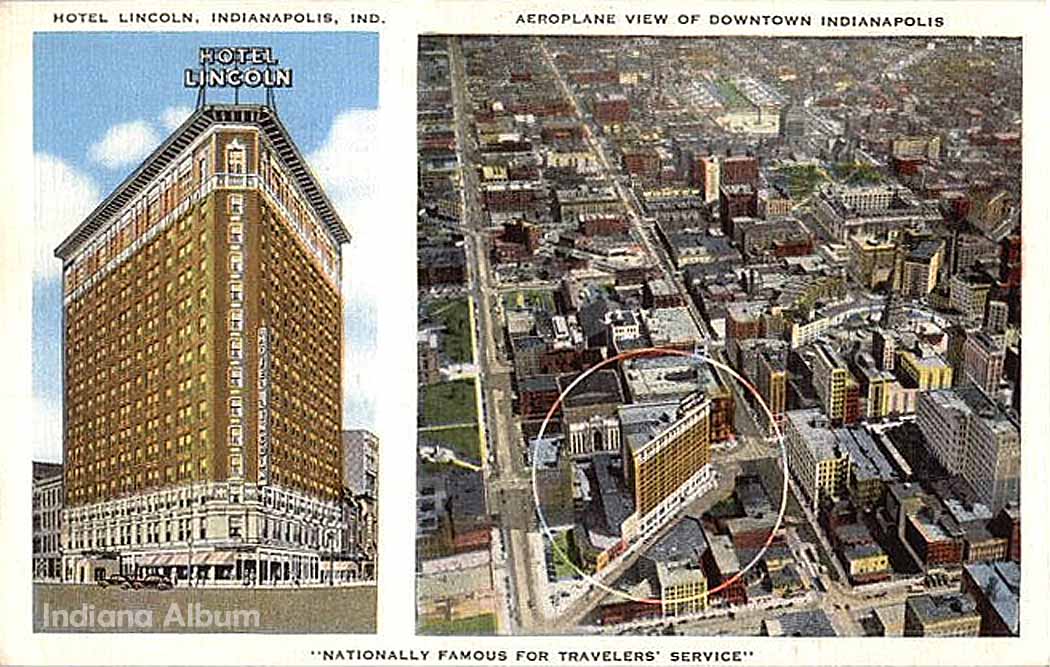 After the upper floors were added, this was the tallest flatiron building ever built in Indianapolis. The Lincoln was a popular convention center for groups ranging from the D.A.R., the Ku Klux Klan, and the Indiana Button Society. (Indiana Album/Heritage Photo and Research Services) 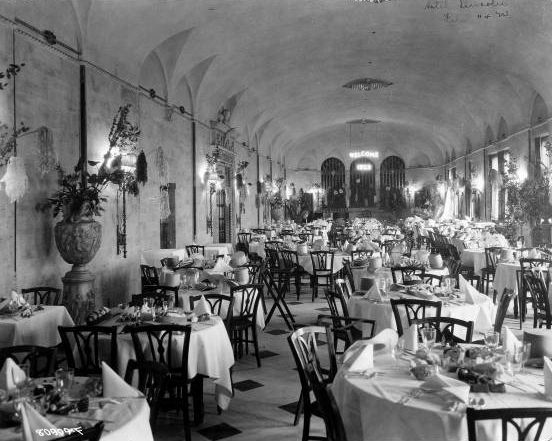 The Travertine Room was one of the promoted improvements of the expanded hotel. The grand dining room featured walls made of travertine marble imported from Italy, a vaulted ceiling, and a marble floor. In the distance is a custom-designed Estey organ, played during the hotel’s popular Sunday evening concert dinners. Here, the room is decorated for a New Year’s Eve party and a neon sign reads “WELCOME 1923.” (W. H. Bass Photo Company Collection, Indiana Historical Society, #80909) 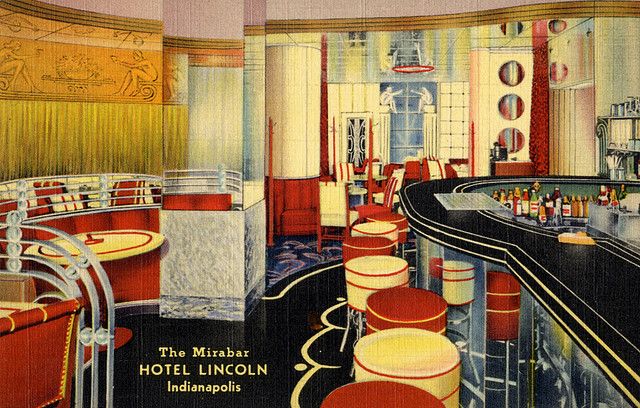 Through the years, hotel management modernized the interior to keep up with current design trends. “The Mirabar” was decorated in the late 1920s or early 1930s in the Art Deco/Art Moderne style. (Postcard courtesy of Evan Finch. For you postcard buffs, samples for fabrics and wallcoverings from the Mirabar are still on file in the Curt Teich Postcard Archives near Chicago. Printers at the postcard manufacturer requested these items to get the colors as accurate as possible.) 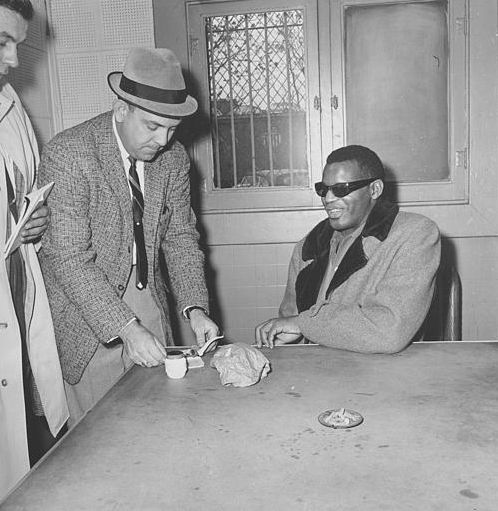 The hotel was acquired by Sheraton Hotels in 1955 and became known as the Sheraton-Lincoln Hotel. After the demise of other prominent downtown hotels, the Hotel Lincoln was one of the top choices for visiting celebrities and politicians. In November 1961 Indianapolis police arrested jazz musician Ray Charles at the hotel for drug possession. Here Indianapolis detectives William Owen and Robert Keithly question Charles about narcotics seized from his room (Associated Press Photo). Robert Kennedy and his campaign staff leased the entire eleventh floor of the Hotel Lincoln during the 1968 Indiana primary. 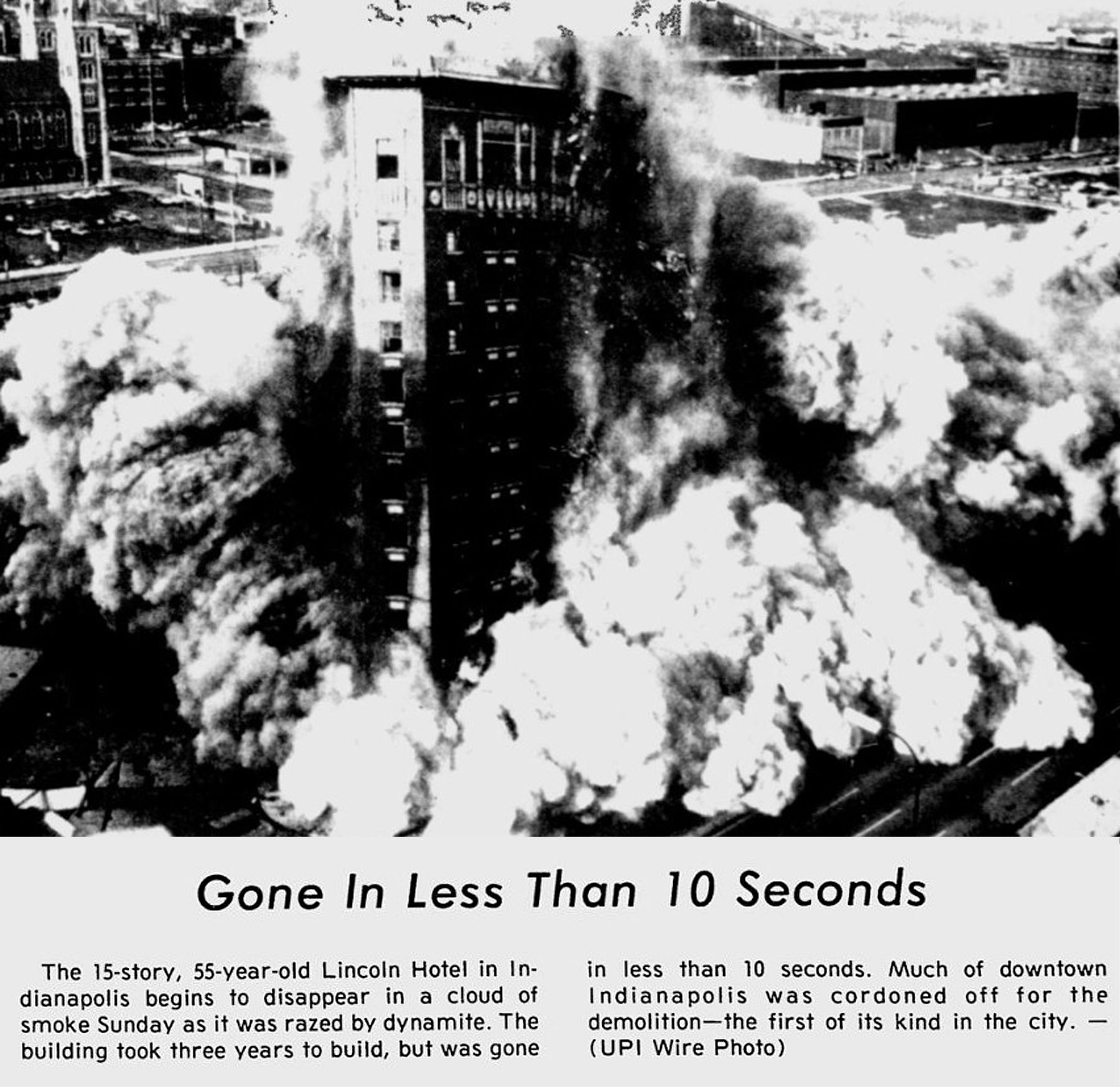 The demolition of the Hotel Lincoln in April 1973 marked the first time that controlled dynamite was used to raze a building in Indiana. The wrecking company finally convinced the reluctant public safety instructor to allow dynamite rather than the traditional wrecking ball, saving both time and money. Although the exact time was kept secret and the surrounding area was cordoned off, over 200 spectators gathered to witness the building fall to the ground. (Warsaw Times Union, April 9, 1973)

There was a video of the Lincoln Hotel’s demolition available on youtube, though it has gone missing in recent years. 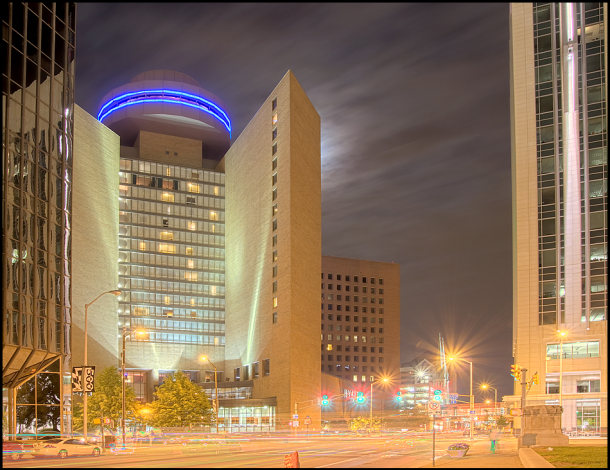 2008 photograph of the Hyatt Regency courtesy of photographer Ron Wise

Although this stretch of Kentucky Avenue was obliterated in the early 1970s, the Hyatt Regency was built with a triangular shape paying homage to the angling street and flatiron buildings that once stood on the site. The mixed-used building was completed in 1977 and designed by architectural firm JVIII – a composite of Koetter Tharp & Cowell; Caudill Rowlette Scott; and Newhaus Taylor. Today the building is called the Hyatt Regency Indianapolis/PNC Center. The circular upper floor houses the Eagle’s Nest, a rotating restaurant. (Photograph by Ron Wise, Available Light)

Should you use information found on this website elsewhere, please credit HistoricIndianapolis.com.

Thanks to the Indiana Historical Society for use of several photos here. You can view more historic photographs of the Hotel Lincoln in their collections here.