Rumors have swirled around the Dearborn Hotel for years. Was it really built by the Ku Klux Klan? Part of a researcher’s job is to sift through the available snippets of historic resources and tell a factual story about a person, place, or event. We look at newspaper articles, oral recordings, maps, corporate histories, and many other sources, realizing that sometimes these sources are just plain inaccurate or incomplete. Hopefully enough evidence will trickle down through time allowing us to check, double check, and confirm our facts in several different primary sources.

Oral histories in particular can be troublesome. Although personal histories often provide the most colorful stories, we humans sometimes get it wrong. People’s memories fade over time, individuals will have different perspectives of the same event, and we tend to repeat hearsay without questioning its validity. Which leads to today’s “Then and Now” column about the Dearborn Hotel on the east side and my quest to separate fact from urban legend.

As I have worked with the history and preservation committee of NESCO (the Near East Side Community Organization), over a dozen people have commented that the ten-story Dearborn Hotel was built by the Ku Klux Klan to house out-of-town members. Many eastsiders believe that a tunnel runs (or ran) under the street connecting the Dearborn Hotel to a brick house that was built for a KKK officer (some even say it was built for Grand Dragon D. C. Stephenson). So many individuals have repeated this that I tend to believe at least part of this persistent rumor, but I have not located written proof. Here is what I know and theorize so far. Can you add any details?

Although most people only remember this building as the Dearborn Hotel, it was originally built to house a community club. Newspaper accounts reveal that several athletic clubs merged in December 1921 to form the Brookside Athletic Association. They dreamed of building a club house for sporting events as well as community gatherings. Minutes of organizational meetings explained that “our motive is an unselfish one, and our project unrestricted except to color. Any creed is invited, and [either] sex is welcome so long as one’s moral side is unquestionable.” Officers temporarily chose the name Westinghouse Community Club in February 1922 (presumably after the nearby Westinghouse Lamp Company), but this was quickly changed to the Commonwealth Community Club. The building itself was named Liberty Hall. The fundraising committee attempted to raise $75,000 by selling memberships and bricks to the public. (Indianapolis Star, February 17, 1923)

Could the Ku Klux Klan have been behind the construction of this club? These reasons support the idea: 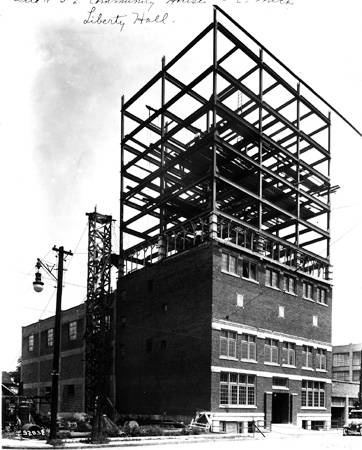 Liberty Hall, seen here during construction in 1925, was started by early 1923 and may have been built in phases. It appears that they are adding the top six floors. This view looks northeast at the brick and steel frame structure. If this building was a social club for the Ku Klux Klan, newspaper articles give no hint of it. Committee members regularly reported on the many potential community uses for the soon- to-be-finished hall. The fireproof building was to feature an auditorium/gymnasium suitable for socials, dances, home talent plays, musicals, and basketball. An area was to be furnished with home-like furniture, a reading room, kitchen, showers and baths, and public restrooms. The committee was working on a futuristic-sounding “wireless telephone system, whereby it will be possible for any member to learn the complete program to be at the community house at any time, thereby allowing him to keep in touch with any of the neighborhood activities in which he may be interested.” 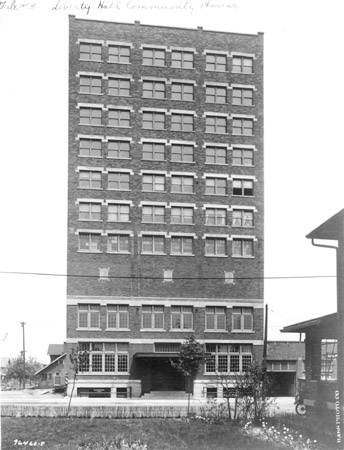 The Bass Photo Company photographed the newly constructed building in 1926. The club lasted a very short time. By 1930 the address was listed as the Marigold Club and Café, and in 1931 was listed for the first time as the Dearborn Hotel. The hotel served the eastside for about sixty years. Sixty-six rooms on the upper floors housed guests while a bar and full-sized gymnasium were open to the public. WAIV, a classical radio station started by Eli Lilly and Company scientists, went on the air in 1961 from studios in the Dearborn. Ironically, in 1968 WTLC, the first African-American radio station in Indianapolis, began broadcasting from the building supposedly built by the Ku Klux Klan.

In 1991 the rundown Dearborn Hotel was purchased by Wheeler Mission for use as a full-service facility for needy families and youth. It was named the John D. Hughes Community Center. Since 2009 Wheeler Mission has used the building as their Center for Women and Children. (Google Street View looking west on Michigan Street, 2009) 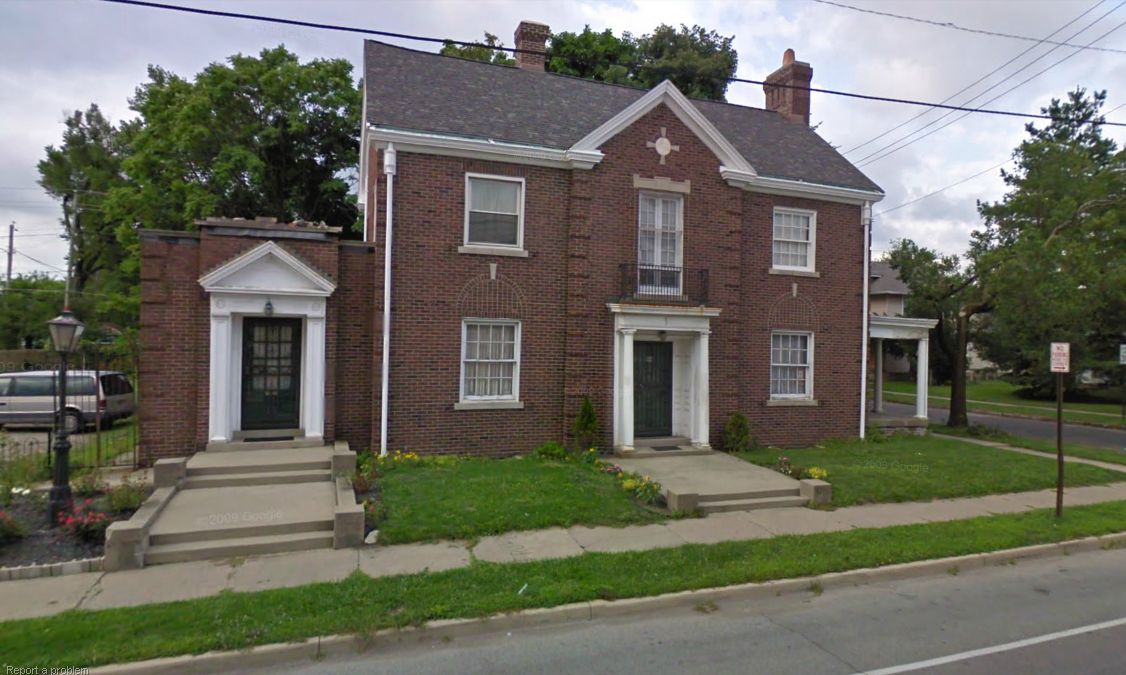 So does anyone know if a tunnel ever led from this house at 3203 E. Michigan Street under the street to the Dearborn Hotel? Was this home built by the Ku Klux Klan or the Commonwealth Community Club? Grand Dragon D. C. Stephenson lived in nearby Irvington and was sentenced to life in prison for the rape and kidnapping of a woman in 1925. It is possible that the home was planned for Stephenson or another KKK officer, but never came to be due to the decline of the Klan during the late 1920s. The home was owned in the 1930s through ‘50s by Dr. Robert J. D. Peters who saw patients in the small addition to the east (left in this 2009 Google Street View photo). Neighbors have told me that a door on the north wall (facing the Dearborn Hotel) has been blocked up and others swear that a tunnel has mostly been filled-in but still leads several yards under the street. My furnace man used to service this house and says that he has inspected the basement closely and there is no clue that there is now or ever was a tunnel.

Follow up: I called the current homeowners, Gene and Jan Crouch, who have a wealth of information that came with the property. This house was built in 1927 (they have the receipt to prove it) for Dr. Peters who was a good friend of D. C. Stephenson. By 1927 Stephenson was in jail and the Klan was rapidly losing popularity. The tunnel led not to Liberty Hall, but to a one-story brick machine shop west of the hall. In case of a police raid, Klan members could leave Liberty Hall, go the adjacent machine shop, ditch their robes in the tunnel, and be playing pool in the Doctor’s basement by the time the cops arrived. Gene believes that Stephenson himself was involved with planning Liberty Hall, but he is not sure about the KKK’s involvement (but the CCC name is suspicious to him, too). Many of the Klan members were also members of the local Masonic Lodge. He believes the tunnel was only used for a few years and partially collapsed “many, many” years ago when a sewer line was run underneath Michigan Street. The tunnel entrance in the front of their home caved in about fifteen years ago and solid blocks now cover the opening. Dr. Peters died in the 1950s, but his wife continued to live in the home until about 1989.

I have yet to determine the Klan’s involvement, but I am sharing my notes in hopes that the readers of Historic Indianapolis will share their memories and help solve this mystery that I have not had time to fully research.