With all of the talk of demolition of abandoned buildings, it is encouraging to see neighborhoods take charge of their problem properties and find positive new uses. The proactive residents of Englewood Neighborhood on the near east side have taken their former public school on North Rural Street and found an adaptive reuse as housing. 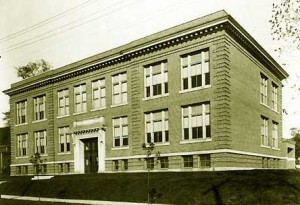 The Lucretia Mott Public School No. 3, located on Rural Street just north of East Washington Street, was completed in 1905. During the 1890s-1910 this area transformed from a rural setting (thus the street name) into a thriving, then suburban, neighborhood. Contractor W. P. Jungclaus Company built the brick structure for the Indianapolis Public School system for under $43,000. The elementary school was named after Quaker minister Lucretia Coffin Mott (1793-1880), a social reformer remembered for her efforts to end slavery and the promotion of women’s rights. (Indianapolis Public School) 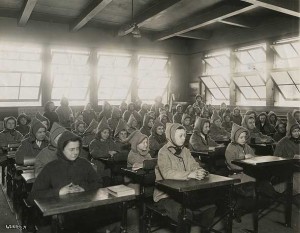 The first open air school in Indianapolis started in the Lucretia Mott School in 1913. The open air movement (also called the fresh air movement) began in Europe and quickly spread to the United States in 1908. In an era rife with tuberculosis and malnutrition, these schools cared for children who were anemic, thin, and showing pre-tuberculosis symptoms. Promoted by the Indiana State Board of Health and the Indiana Society for the Prevention of Tuberculosis, the schools encouraged fresh air and sunshine, physical activity, balanced meals, and one hour of rest each day. Activities included gardening, manual arts, and handwork. This photograph shows students in their third floor classroom. Nutritious meals were available and public nurses regularly weighed the children to track their progress. Several former students recalled that they hated school in the winter when the windows were wide open. They were given “Eskimo suits,” consisting of itchy, hooded wool coats and pants to wear over their clothes. Many questioned placing the sickest children in these cold conditions, but physicians theorized that fresh air and daylight would improve their health. The open air movement largely disappeared by World War II when tuberculosis was better understood and antibiotics reduced the incidence of the disease. (Indiana Album/From the Indiana State Board of Health) 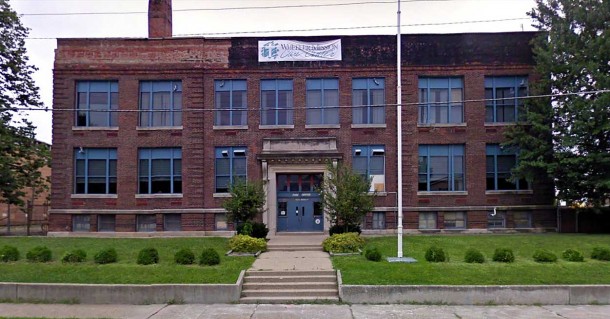 After many decades of continuous use, the school closed in 1980 and was purchased by The Care Center (now part of Wheeler Mission Ministries). The Care Center provided shelter and services for homeless women and children. After moving this branch, the Wheeler Mission donated the empty building to the adjacent Englewood Community Development Corporation in 2009. Most members of the CDC live in the neighborhood and attend the adjacent Englewood Christian Church. Although the front façade has seen few alterations, the old school looks “scalped” due to the removal of the cornice and dentils. (Google Street View, 2009) 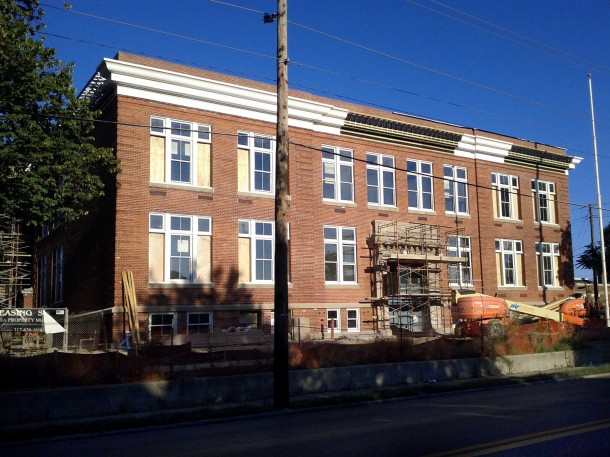 Construction is underway to adapt the school into 32 apartments. The Englewood CDC, along with partner the John H. Boner Community Center, anticipates spending $6 to 7 million on the building, now known as The CommonWealth. The mixed-income apartments will be evenly divided between market rate units, low to moderate income units, and apartments for chronically homeless families or individuals with a mental illness (supervised by Adult & Child Services). Tenants will share the gymnasium and other public spaces.

Learn more about the Englewood Community Development Corporation on their web page and follow the progress of the CommonWealth and other projects on their Facebook page.

Although newspapers too frequently only mention crime and negative aspects of the near east side, there are dozens of success stories like this one. Neighbors in Englewood and the other twenty neighborhoods in the NESCO (Near East Side Community Organization) area are working diligently to improve their part of the city. Learn more about Englewood Neighborhood (bounded by Rural, Michigan, Lasalle Streets and Moore Avenue) in their new book, The Electric Glory of the Near Eastside: The Rollercoaster Ride of Englewood’s Modern History.