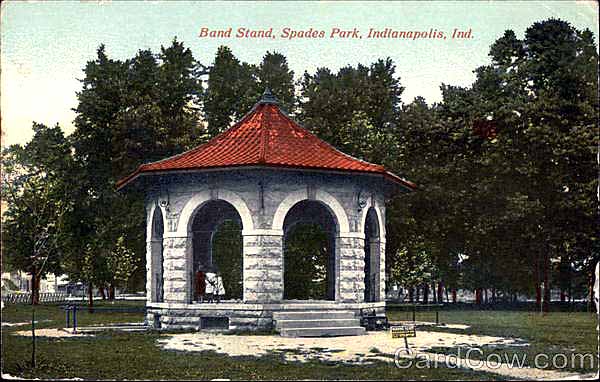 This charming stone bandstand with a tile roof once graced the grounds of Spades Park on the northeast side of Indianapolis. The land, formerly known as “Shoestring Park” for its linear shape, was donated to the city in 1898 by real estate developer Michael Spades. Older neighbors recall that a small basement room stored musical instruments and tennis racquets. Sadly, although residents fought to save the structure, it was demolished in the early 1970s and replaced with a metal gazebo. Remnants of the bandstand are said to be buried under a slight mound in the park. (Postcard from CardCow.com)

An old gentleman who grew up across the street recalled that gangster John Dillinger used to play baseball in the park as a boy. Later, he said, Dillinger’s chauffeur lived on Brookside Avenue and the gang was known to gather in Spades Park in the 1930s.

The park is on 31 acres of land bounded by Nowland Avenue, East Brookside Avenue, Brookside Parkway North Drive, and North Jefferson Avenue. Spades Park is adjacent to Brookside Park to the northeast. At 139 acres combined, these parks make up one of the largest green spaces in the city. Brookside is also one of the oldest parks, acquired by the city in 1898. (Google Street View, 2009) 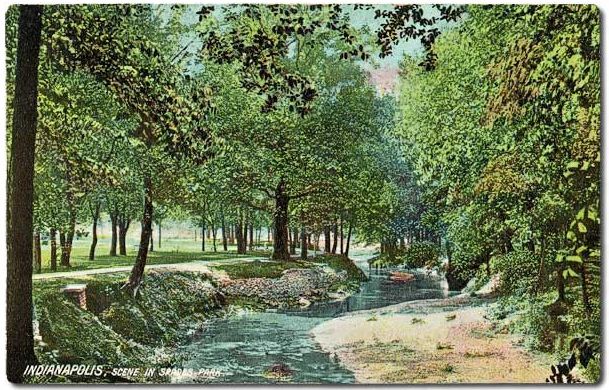 Pogue’s Run, named after an early settler of Indianapolis, is the defining feature of Spades Park. This postcard of a scene in Spades Park is postmarked 1908.

In about 1909, the Brookside Civic League started a festival called the Feast of Lanterns. While lawn fetes with Japanese and Chinese paper lanterns had been sponsored by other groups including Woodruff Place, Broad Ripple, and the Indianapolis Canoe Club, the Brookside Feast of Lanterns was by all accounts the most spectacular and longest lived. Residents strung thousands of paper lanterns on the bandstand, bridges, and trees and illuminated them with candles and, later, electric lights. Surrounding homeowners also decked their porches with the colorful paper lanterns. Entertainment during the evening event included cake walks, car rides, a donkey cart, and musical and dancing groups. (Indianapolis Star, July 23, 1914, p.14) 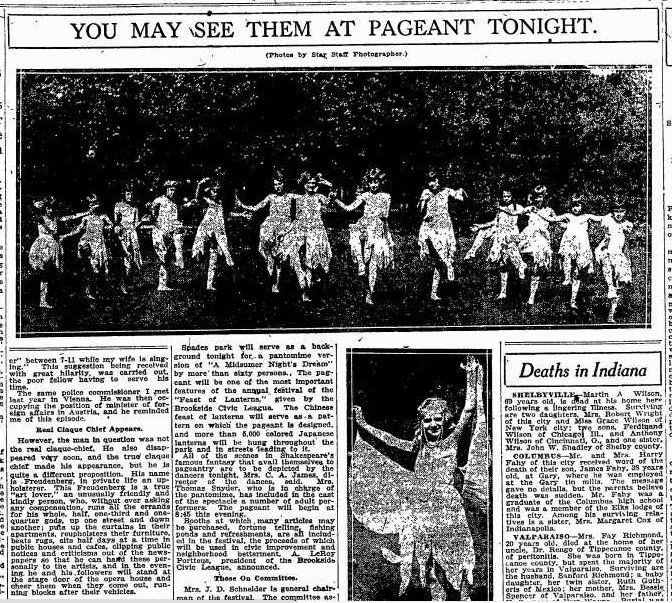 Over sixty young girls performed a pantomime version of “A Midsummer Night’s Dream” at the 1923 Feast of Lanterns. Old photographs of the event have proven to be nearly impossible to find. If your family lived on the surrounding streets, please check your albums for old photographs showing scenes of paper lanterns. Contact thenandnow@historicindianapolis.com if you are willing to let us scan them. (Indianapolis Star, August 1923)

By World War II, the festival had only been held intermittently and finally faded away. 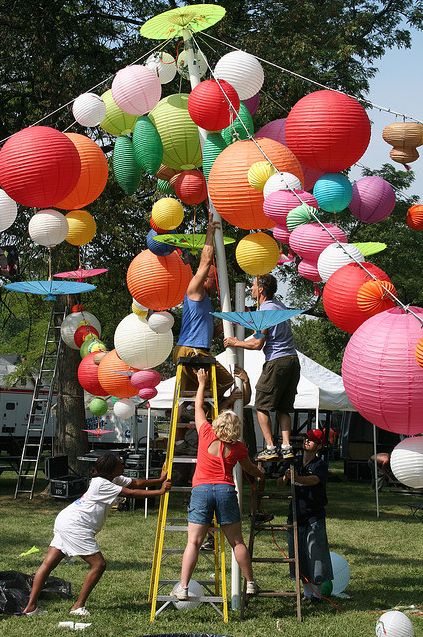 In 2003 neighbors in Windsor Park and Springdale Neighborhoods dreamed of a music festival in the park and stumbled upon old Feast of Lanterns newspaper articles, thus the festival was reborn six decades after it had ended. The festival has grown each year, despite losing the fragile paper lanterns to rain during the first five years, and is now sponsored by the Near East Side Community Organization (NESCO). Here the decorating crew installs some of the lanterns in 2008. (Photograph courtesy of Wilson E. Allen) 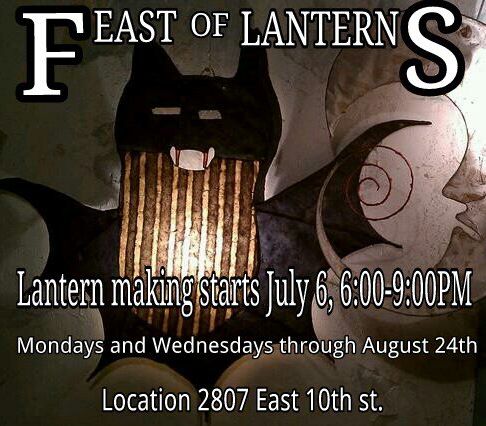 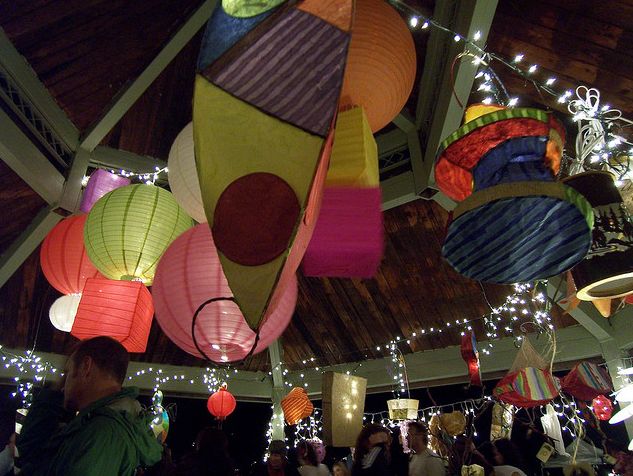 The creative folks in the NESCO area really get into making paper lanterns starting two months before the festival. Anyone can participate at the Made for Each Other Community Art Space. The lanterns are sold during a Feast of Lanterns silent auction with proceeds benefiting NESCO. 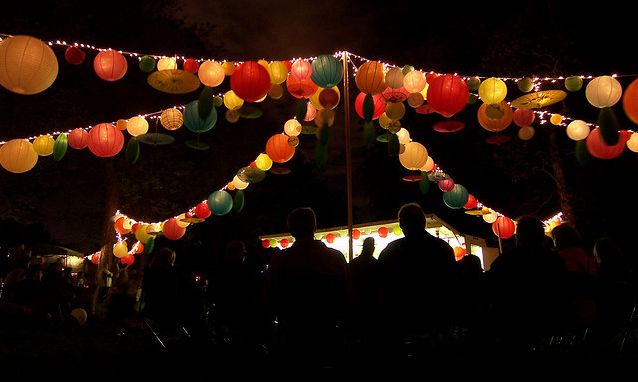 Photographs do not do justice to the atmosphere in the park after the paper lanterns are lit at dusk. Throughout the day two stages feature music, dance, and entertainment, while dozens of food, artists, and community tents sell their wares. Children can make crafts and paper lanterns.

The Indianapolis Parks Department continues to operate Spades Park, which is defined as a neighborhood/mini park serving communities and neighborhoods. Throughout the year people can freely use the playground equipment, gazebo shelter, grills, and picnic tables…but the most magical time to be in Spades is at dusk when the switch is thrown and the paper lanterns light up the park once again.

The next Feast of Lanterns is Saturday, August 27, 2011. A lantern ball is scheduled for Friday evening, followed by a Feast Parade on Saturday morning. The Festival opens as parade approaches Spades Park. Like “NESCO Feast of Lanterns” on Facebook to learn more, become a vendor, or volunteer.