One of the joys of living downtown is seeing down-and-out neighborhoods bounce back to life once again. St. Clair Place, just east of Woodruff Place, is one of the latest areas to rediscover its mojo thanks in part to the 2012 Super Bowl Near Eastside Legacy Project. I have not yet researched the history of this neighborhood in depth, so consider this write-up a “stub” (Wikipedia speak for short, incomplete article) and please share any photographs or memories you have of the area. 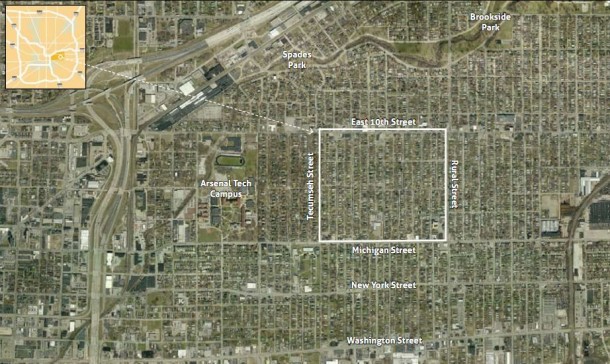 St. Clair Place is located two miles east of downtown and consists of 155 acres. It is bounded by Woodruff Place and Tecumseh Street on the west, Tenth Street on the north, Rural Street on the east, and Michigan Street on the south. As of 2009, the area had 150 vacant or abandoned homes, 100 empty lots, and 35% home ownership—a far cry from the developer’s original vision. (2009 map from Saint Clair Place Neighborhood Revitalization Plan) 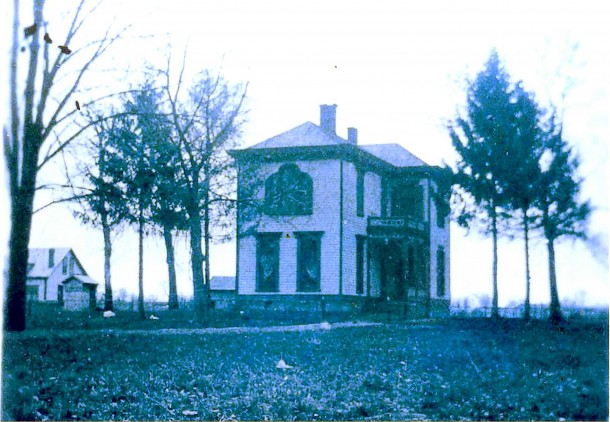 Before the area was platted, the land consisted of farmland. In the 1860s and ‘70s, part of the area was known as “Brickville” due to the many local east-side brickyards, including one on the southwest corner of Tenth and Rural Streets. This circa 1890 photograph shows one of the original farmhouses located in what is now the 900 block of Tecumseh Street. The caption states that this was a dairy farm on Clifford Avenue, now East Tenth Street. This house still exists, as you will see below, but we speculate that the house was moved since it now sits eight lots south of Tenth Street—which would have been an extremely long driveway. This early blue snapshot is a cyanotype, a photographic process used by amateur photographers. (Photograph courtesy of Craig Nelson)

These maps illustrate the development and renaming of streets through the years. City directories indicate that small houses and businesses first appeared along Tenth Street, the east side’s main commercial corridor and path for the trolley line. 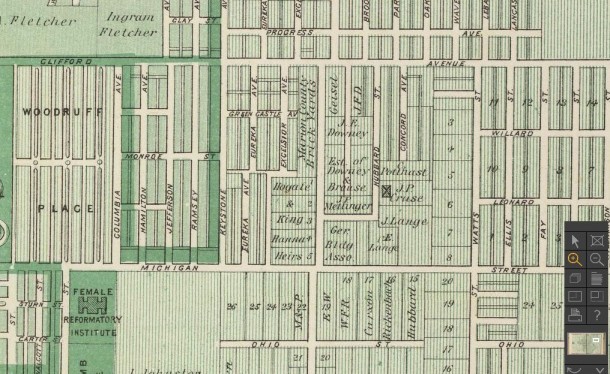 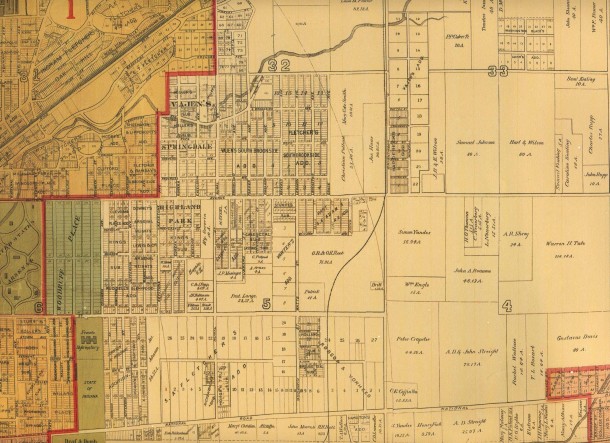 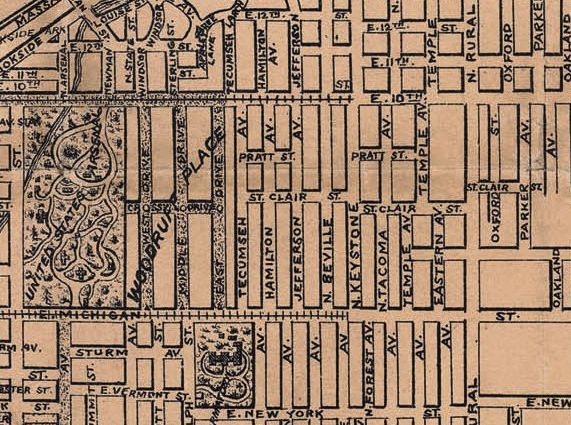 One story records that an early developer intended to call the development “East Woodruff Place,” taking advantage of the proximity and stature of the adjacent Woodruff Place. The upper-class residents of Woodruff Place not only resisted and stopped the name; they also erected a sturdy fence and refused to share an alley along their eastern border. By 1907 the Southern Lumber Company, a realtor and developer, purchased some of the land and constructed dozens of houses in plats named Tecumseh Place and St. Clair Place Additions. 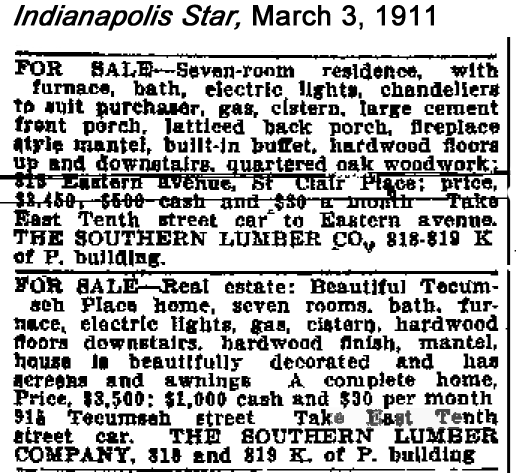 Luckily, the Southern Lumber Company heavily advertised so we have a sense of their intended market. The additions were just a short streetcar ride to downtown, so the homes were purchased primarily by skilled workers and mid-level businessmen and their families. The five-, six-, and seven-room homes featured large windows; hardwood floors, fireplaces, and built-ins; modern conveniences such as electric lights and gas; and a monthly payment plan financed by the developer. Many houses featured diamond-shaped, leaded glass windows. Prices averaged $3,000-3,500. 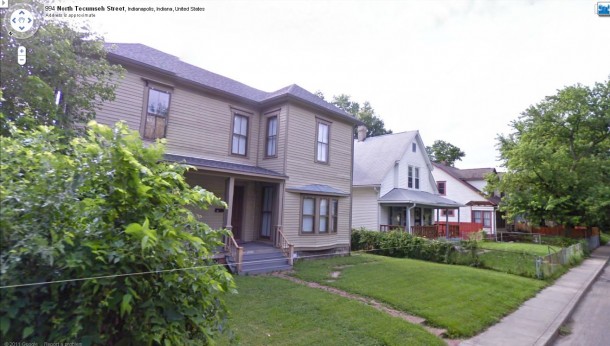 Today, the old house from the dairy farm resides next to its newer (1907-1912) neighbors in the 900 block of Tecumseh Street. The circa 1870s house has been undergoing restoration for several years and still retains much of its original woodwork. Note that the three-sectioned, second floor window visible in the vintage photograph faces Tenth Street (left) and not Tecumseh. (Google Street View, 2009) 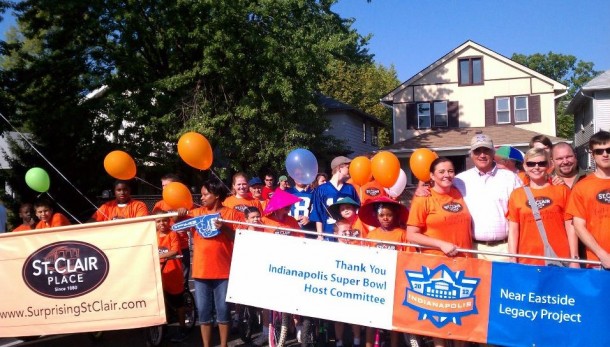 Saint Clair Place residents, old and new, share a special camaraderie that comes from working together to revitalize the neighborhood. They are known for their backyard barbeques and neighborhood parties. Over thirty neighbors marched together on August 27 in the Feast of Lanterns parade. Here they pose with Mark Miles, chairman of Super Bowl 2012 host committee. (Courtesy of Sarah Dillinger Blackwell)

The neighborhood has accomplished much in the past few years, thanks to many east side groups and committees too numerous to mention. A “game plan” was created to guide St. Clair Place’s revitalization with goals such as promoting a green neighborhood, marketing homes to diverse income levels, respecting the area’s layout and history, and rehabilitating existing houses. 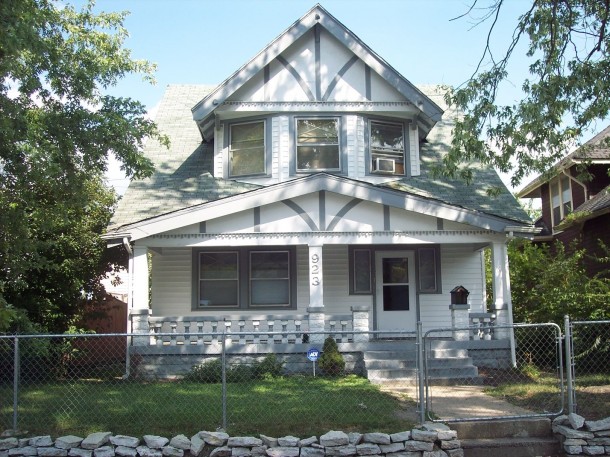 While many of the homes are well maintained, others have languished. Despite the neighborhood’s goal to “rehabilitate as many vacant homes as feasible to celebrate their architectural contribution to the neighborhood,” nearly thirty of the homes are on Mayor Ballard’s demolition list. As demo crews have already started, with plans to raze 2,000 houses citywide, pleas from St. Clair Place neighbors and NESCO (Near East Side Community Organization) have become more urgent. They have asked city employees to slow down the process and give residents or the local CDC (community development corporation) a chance to review the homes for preservation-friendly options. It would be a shame to bulldoze viable homes, remove them from the tax lists for yet more empty lots, and deny neighbors the opportunity to rehab them just as momentum is building. After all, many of Lockerbie neighborhood’s houses were considered “demolicious” in the 1970s, but luckily the preservation movement came to Indianapolis at the right time to spare the homes from slum clearance. Haven’t we learned our lesson? (Photo by Joan Hostetler, July 2006)

WFYI’s “More Than A Game,” a documentary about the Near Eastside Legacy Project