This unidentified Indianapolis Fire Department negative dated 1946 appears to document an accident near the intersection of Fort Wayne Avenue, Saint Clair Street, and Alabama Street. This view looks northeast on Fort Wayne Avenue. Fortunately, it also shows an infrequently photographed neighborhood theater named Bair’s St. Clair Theatre (see a 1929 view in the Indiana Historical Society’s Bass Photo Collection). Other businesses at this busy intersection include a Sablosky’s Department Store, McCallum’s Market, a liquor store, Davis Cleaners, and a bakery. The smokestack in the distance is for Excelsior Laundry.

According to Cinema Treasures (www.cinematreasures.org), a wonderful online source for the history of movie theaters, architect J. F. Brubaker designed this building and it opened on November 24, 1923. A reader reported that it had 1,090 seats in 1955. Built during the silent film era, the theater had an organ and a small orchestra pit for live music. 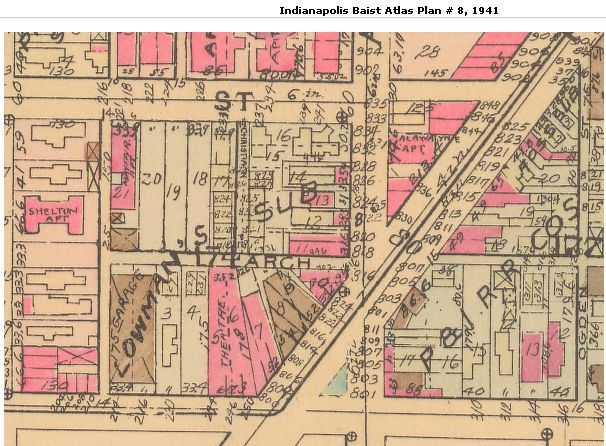 Today many of the commercial buildings at this intersection in the Saint Joseph Historic District are gone. Part of St. Clair Theatre building was razed and is now the site of a small parking lot. Office Furniture Mart occupies the west half of the old theater, but the building was drastically altered in the late 1950s or 1960s. The commercial block to the north was home to King’s Typewriters for years and today houses a hair salon and other small businesses. To the east (right) is Renaissance Place, an early 1980s housing development constructed by Robert Borns. The 120 condominium homes sold out in a day and a half and were among the first new homes constructed in Center Township in several decades. (Google Street View, 2009)

Would you like to see your old photographs featured in this Then and Now column? If so, send us a note via the contact form–we’d love to connect.

Then and Now: The Jefferson Apartments, 2207-11 East Tenth Street