This rare house construction photograph, dated May 12, 1898, shows nineteen contractors posing on the roof and scaffolding with hammers, L-square rulers, and saws. The gentleman in front, presumably the architect or general contractor, holds a rolled-up set of architectural drawings or house specifications. The framing is complete, the stone and brick porch is partially built, and ground floor brickwork has been laid. (Thanks to Pam Mangan, antique dealer at Midland Arts and Antiques Market, for giving me this photograph.)

Rachel Swain was a well-educated progressive woman for the era. She was born in 1835 near Richmond, Indiana to Anthony and Rhoda (Lane) Way and attended Antioch College in Ohio. She married Theron Swain in 1860. He was a Quaker from Union County, Indiana and Rachel probably had Quaker roots as well.  They had two sons:  Fremont, a physician who joined her at the sanitarium, and Harold, who became a lawyer in New York City. Rachel was widowed by age 35 in 1869. Like two of her sisters, she continued her education and received an M.D. in 1871 from the Philadelphia Hygiotherapeutic College. In 1883 she graduated from Northwestern University/Women’s Medical College of Chicago. At some point she studied abroad, primarily in Parisian hospitals. Much of what naturalists rediscovered in the 1960s, and the foodies are promoting today, was part of the philosophy of the hygienists of that era: plant-based diets, physical exercise, natural medicines, and balanced nutrition. Susannah Way Dodds, her oldest sibling, was best known of the three physician sisters and must have stood out for her dress reform beliefs, a part of the hygienic movement. An article about Dodd’s career stated that she “continued to shock the prudish of her era by wearing pants instead of dresses.”

By the early 1880s Rachel operated a private hospital at her Indianapolis home on North New Jersey Street (currently the site of the English Foundation Building parking lot just south of Walnut Street). She promoted vegetarianism and authored the book Swain Cookery with Health Hints in 1895.

The Greater Indianapolis Blue Book for 1898/99 (a social directory for club members and prominent people) indicates that she had moved into her Woodruff Place home where she remained until her death in 1919. She specialized in treatment of chronic women’s diseases.

A listing of Swain’s contributions to medical literature appeared in Woman’s Medical School, Northwestern University (Woman’s Medical College of Chicago): The Institution and its founders; class histories, 1870-1896. In addition, she was a Unitarian and supported the women’s suffrage movement.

Rachel’s son, Dr. Fremont Swain, lived in his mother’s home along with his wife Bertha G. and daughters Viola and Susannah. He graduated from the Central College of Physicians and Surgeons in Indianapolis and for several years taught physical culture (an antiquated term for physical education) at Harvard University, Lehigh University, and the University of Michigan. When he returned to Indianapolis he became director of the Y.W.C.A. and later was a practicing physician, playing a more prominent role in the Swain Sanitarium as his mother aged. He must have been mechanically minded as he patented a mounting device to connect two wheels into a tandem bicycle in 1885. Sadly, he was killed in 1912 at age fifty when his bicycle was hit by a train at the Big Four Railroad crossing on Michigan Street. 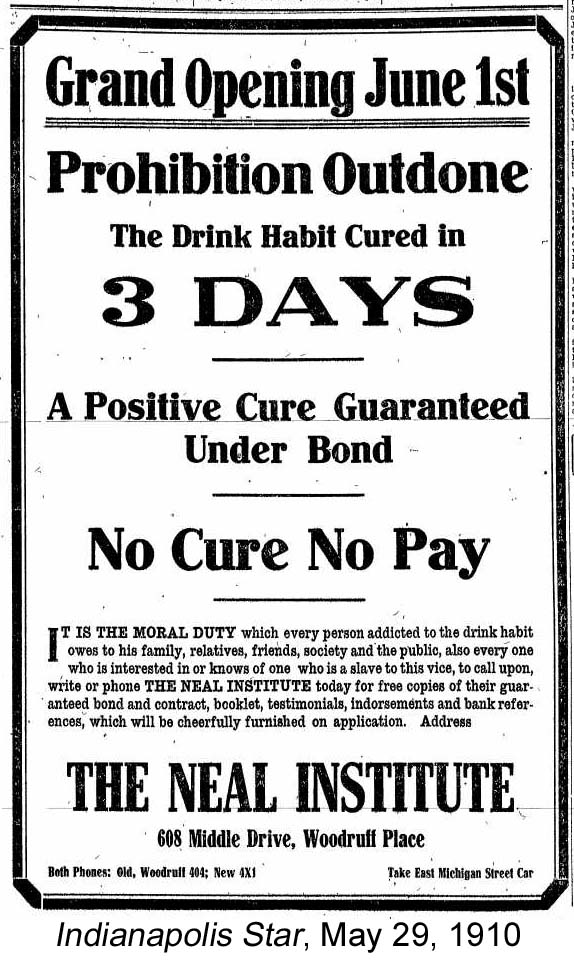 In 1910, while the Swains still resided on Middle Drive, the Neal Institute also occupied space in the home. This was an alcohol treatment franchise that eventually grew to sixty-three treatment sites throughout the United States and Canada before losing popularity and clients during the Prohibition Era. Believing that “alcoholism is not an illness, but rather a poisoning that creates an appetite for more liquor,” the ads vaguely referred to a treatment consisting of an internal vegetable cure “thorough in its work of elimination” (code for purgative agents to cleanse the bowels).

One wonders if NIMBYism (Not In My Back Yard) existed in the early 1900s, for within a few months of the above advertisement, the Neal Institute announced its new location on West Washington Street. 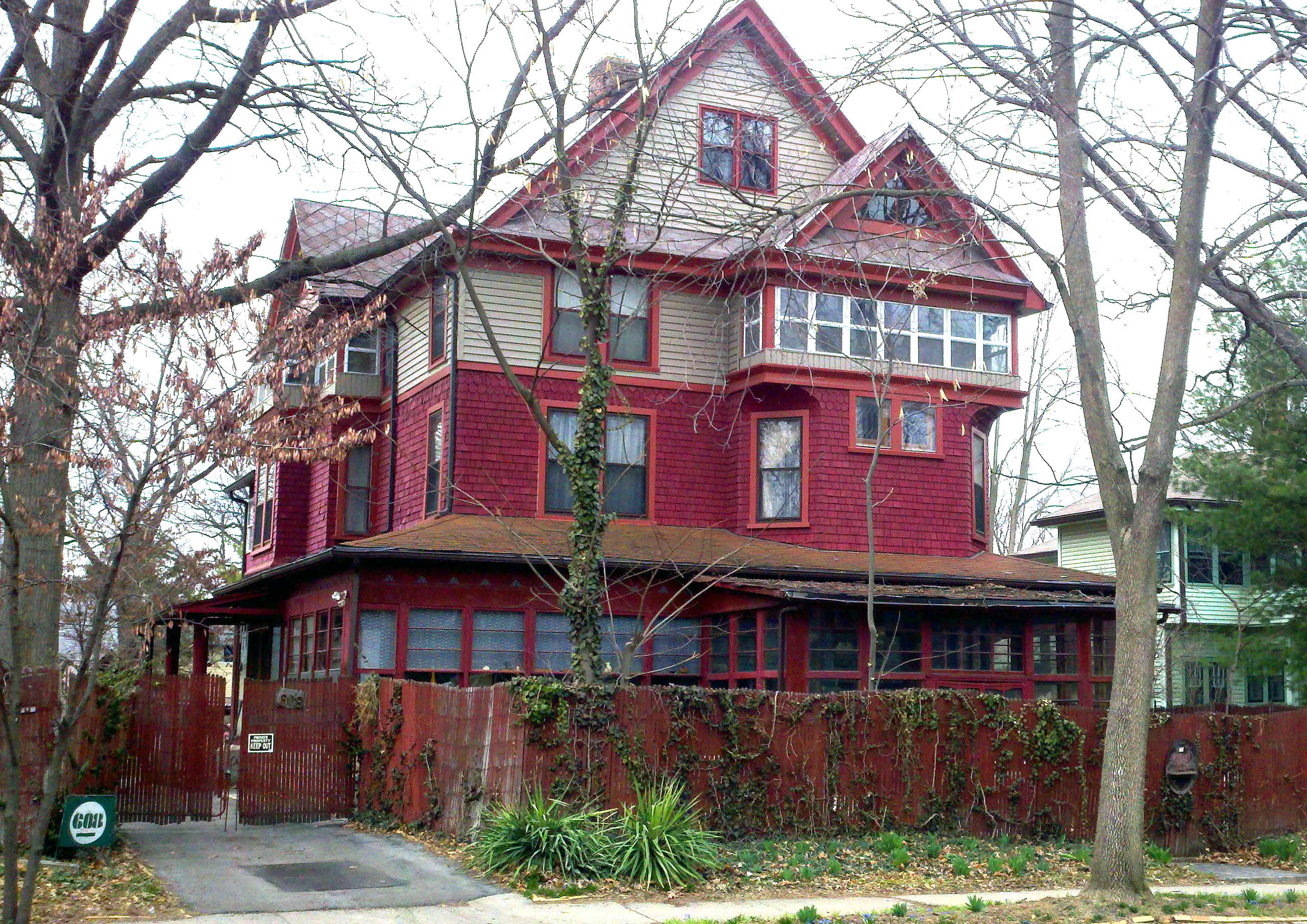 Like many of the large homes in Woodruff Place, this house was eventually broken into apartments. After her son’s death, Dr. Rachel Swain accepted non-patient boarders. By 1920 Thomas F. and Katherine Snyder owned the house and rented out rooms. In directories Snyder was variously listed as an insurance agent, employee of the Chamber of Commerce, and president of Warehouse Distribution Corporation. Eventually ten run-down apartments occupied the house and a fire made the home inhabitable. By the late 1970s the current owners purchased the fire-damaged home for around $5,000 and converted it into a single-family home. A favorite of Woodruff Place home tours, the twenty-nine room home has spectacular woodwork, a full fourth-floor attic, and a large dumb-waiter that Woodruffian children fondly remember exploring. (Photograph by Heritage Photo & Research Services, March 2011)