Sculptor James H. Mahoney would probably be surprised to see that his Benjamin Franklin statue that adorned the 1873 Franklin Building has long outlasted the structure and is now a canvas for pranksters at Franklin College. The Franklin Insurance Company constructed the building on the southeast quadrant of Monument Circle in 1873, but the statue was not added for another year. The Indianapolis News reported on July 3, 1874 that “The statue of Benjamin Franklin for the new insurance building is being rapidly chipped at Carpenter’s. The sculptor, young John Mahoney, is displaying real genious in his chipping, and the massive block of stone, 8 feet in height [sic], begins to look like old Ben for a fact.” In 1874 a crowd gathered to watch the unveiling of the Benjamin Franklin statue placed in a niche above the corner entrance. It was the first work created by John H. Mahoney (1855-1919), an apprentice at the Carpenter Brothers Marble Works (James W. and Benjamin O. Carpenter), contractors who provided stone for the building. The nineteen-year-old had first been inspired by Rogers Group statuary at the  1873 Indiana Exposition and practiced making his own with clay. The Carpenters took a chance by allowing Mahoney to create this twelve-foot tall sculpture as his first major artwork. Mahoney went on to have a long career, studying art in Rome in the late 1870s and creating many other works, including the bronze figures of George Rogers Clark, William Henry Harrison, and James Whitcomb that still stand on Monument Circle.

From his perch on the Second Empire-style building, Ben watched over the Circle for over 55 years, witnessing the construction of the Soldiers and Sailors Monument and many other changes. The Franklin Building was razed in 1929 (here is a view of the building during demolition) and was replaced by the Art Deco-style Circle Tower designed by architects Rubush and Hunter.

Fortunately, the statue was saved and Ben headed north to stand guard at the International Typographical Union headquarters located in the old Van Camp mansion at 2820 N. Meridian Street. Franklin’s career as a newspaper printer explains the statue’s base: “Benjamin Franklin – Printer.” Once again, Ben lost his home due to demolition when the Van Camp home was torn down in the 1960s and replaced by the thirteen-story Stouffer Hotel, completed in 1967 (now home to Ivy Tech). 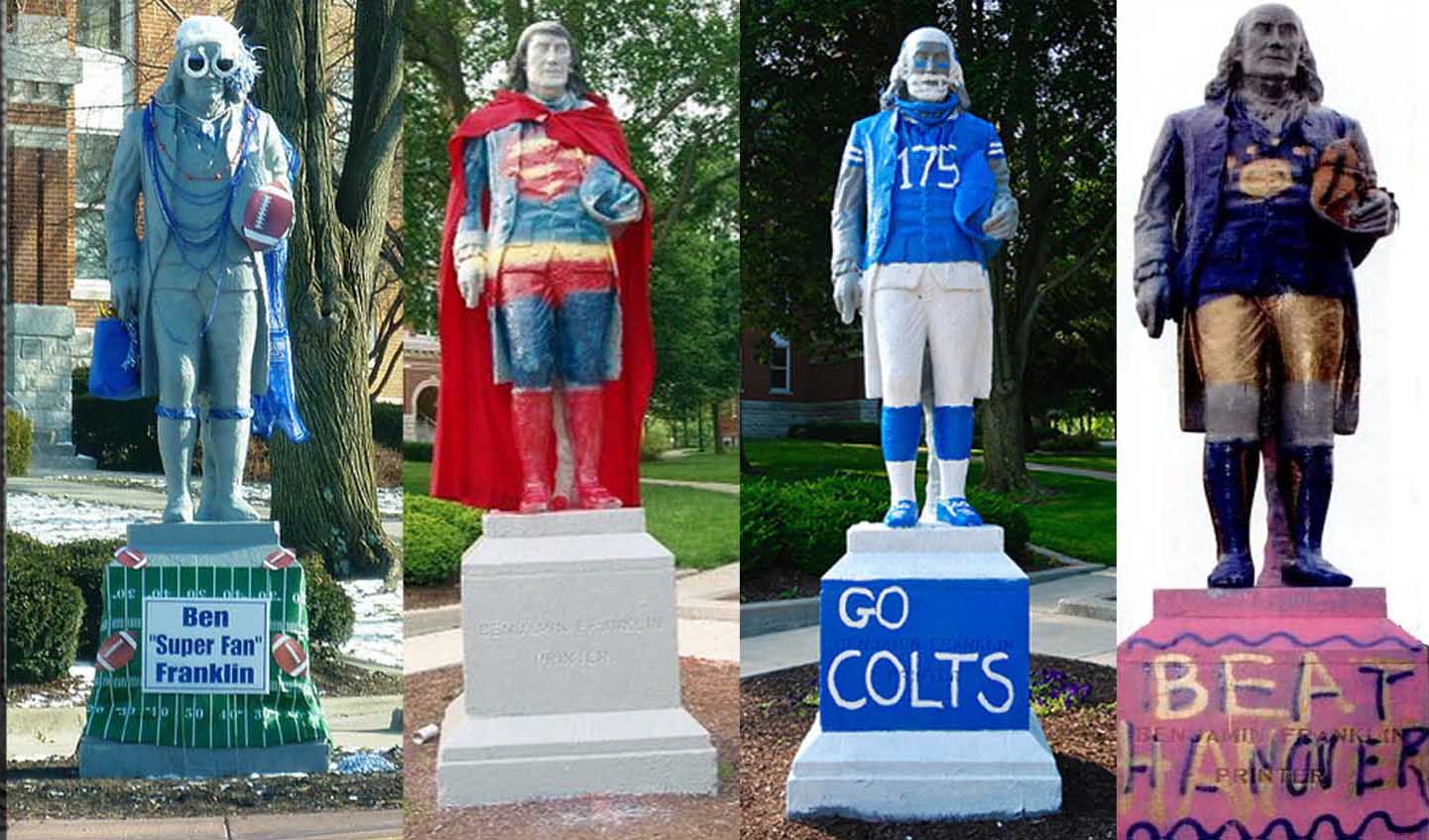 The International Typographical Union donated the statue to Franklin College in Johnson County south of Indianapolis. Here the marble sculpture has been creatively painted and repainted for five decades supporting the Colts, Pacers, the Franklin Grizzlies, as well as non-sports get-ups from pink bras for cancer awareness to Santa Claus to Superman. Between outfits, his lumpy layers of paint are covered with a neutral gray.

In July 2014, Franklin College hired Drake Construction to strip off the hundreds of layers of paint. The company will then repair chips and cracks on the marble sculpture and limestone base and the tradition that is overlooked by school administrators will likely continue.