Several people gather around the old pump on Massachusetts Avenue in this circa 1910-1914 photograph. Four men line up to fill their buckets with water at the site that is currently the northeast corner of One Indiana Square. The view looks north on Delaware Street and northeast up Massachusetts Avenue. Seen to the right is the 300 block of Mass Ave with the Hammond Block barely visible on the far right and the distinctive tower of the Murat Shrine Temple constructed in 1909 in the distance.

I find little information about the pump’s history, but fortunately Hilton U. Brown of the Indianapolis News wrote about it in 1915 in his memoir titled  A Book of Memories.  Brown, who was born in 1859 and lived on Massachusetts Avenue near Tenth Street (then Clifford Avenue), recalled the well in his youth:

At a sharp point made by the diagonal crossing of Delaware Street and the Avenue was [Aaron] Clem’s Grocery. At the extreme point was a pump which knew many people, for it for years supplied their aqueous wants. Pedestrians stopped to get a swig of water there –wading through waste from the plenteous supply of the pump’s product. And the neighbors came with buckets and pitchers for water. One did not have to go very deep for water in those days for the lake which lies underneath the city was then only thirty feet or so below the surface whereas now driven wells are required to reach the receding water-table.

Mr. Clem, whose beginning as a grocer, was so far back in history that nobody knows the date, was as popular as his pump. He belonged to the bearded generation. He was often seen on the sidewalk among the baskets of fruits and vegetables, speaking merrily to the many customers that patronized him. The pump and the store and the old man were part of the history of many days, and it is a pleasure for those who were privileged to know them to reflect on the happy groupings that swarmed the place particularly in the market hours. 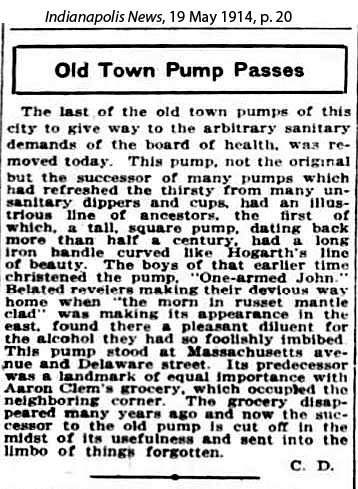 Concerns about sanitation led to the demise of town pumps and this Indianapolis News article reveals that the old pump at Massachusetts and Delaware was the last to be removed on Mary 19, 1914.  To understand residents’ sentimental attachment to town pumps, read Indianapolis author William Herschell’s nostalgic poem “The Old Red Pump on the Corner” in his 1915 book Songs of the Streets and Byways. 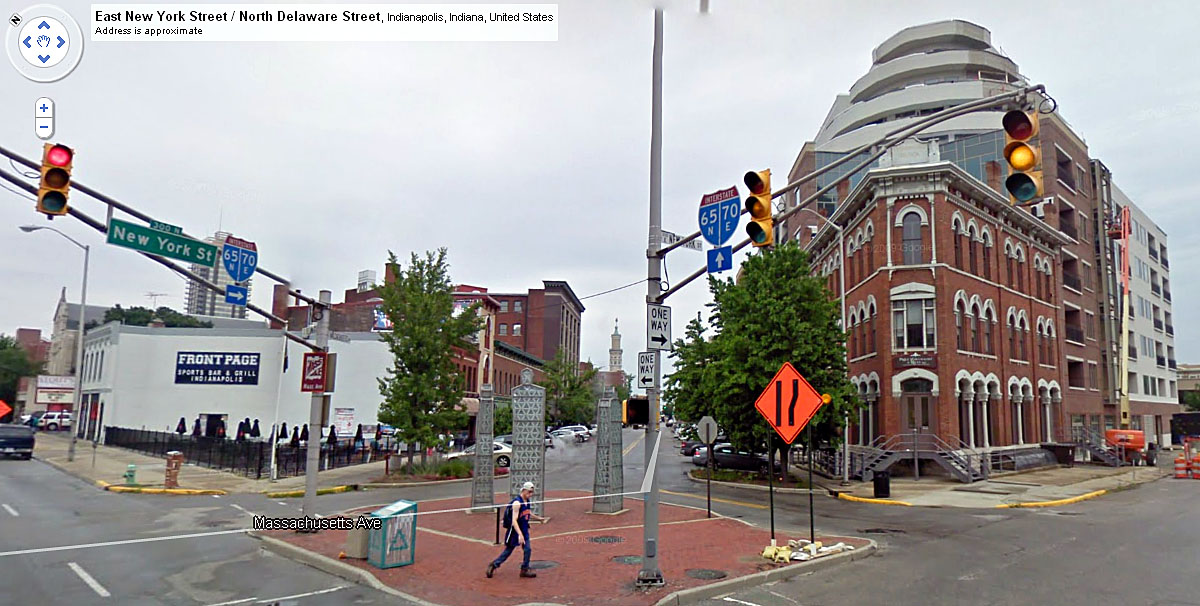 Today the 200 block of Massachusetts Avenue no longer exists as this diagonal stretch was obliterated when Indiana National Bank built One Indiana Square in 1970. Looking northeast, however, many of the older brick buildings have survived and house popular businesses including the Front Page, Stout’s Shoes, and Bazbeaux Pizza (which recently moved across the street into the 3 Mass Ave building located behind the 1876 Hammond Block). The sculpture “Viewfinders,” created by artist Eric Nordgulen in 1986, welcomes visitors to the Mass Ave Cultural District.

This photograph leaves us with questions. Obviously this was a public pump that served the community for many decades. Were public pumps installed by the city or did business owners like Mr. Clem provide them to promote business? Where were the locations of other pumps throughout the city?  If you have any answers or ideas, please leave a comment.