As debate continues about the fate of four 1870s-1910s houses that Keep Indianapolis Beautiful might demolishin Fountain Square’s North Square Neighborhood, I feel a sense of déjà vu from the 1980s.

Indianapolis’s preservation movement had kicked off in the 1960s and 70s and Lockerbie, the Old Northside, Herron-Morton Place, Woodruff Place, and a few other neighborhoods were recognized as historic. Having lived in three of these districts, I saw this energy coming to the near eastside and purchased an 1870s cottage in an iffy area known today as Cottage Home Neighborhood. Some older residents referred to the neighborhood as Rat Town and a particularly seedy street was known as Bed Bug Row. The area looked nothing like it does today. Many houses were covered with Insulbrick siding; old sofas and appliances littered the alleys and banks of Pogue’s Run; and over 140 of the original 300 houses had already been razed due to neglect and encroaching businesses. And yet the area hinted of its potential: gingerbread trim, fishscale shingles, whimsical decorative gables, and wonderful cottage doors. Many great longtime residents had lived here since the 1940s, and a few had roots going back to the 1870s.

Neighbors became amateur real estate agents, marketing newly available houses to friends. We spent hours in the City-County Building finding owners of abandoned properties. Despite early successes and dramatic before-and-after restorations, the fight continued with owners who wanted to demolish houses that they saw as blight. Through much discussion, negotiation, hair-pulling, and even moving three houses, only six homes have been lost since 1984 when the neighborhood association was formed. While many houses still wait to be rehabbed, today the average restored house sells for $100,000-$275,000.

Here are just three of the success stories of once-abandoned houses, two threatened with demolition. 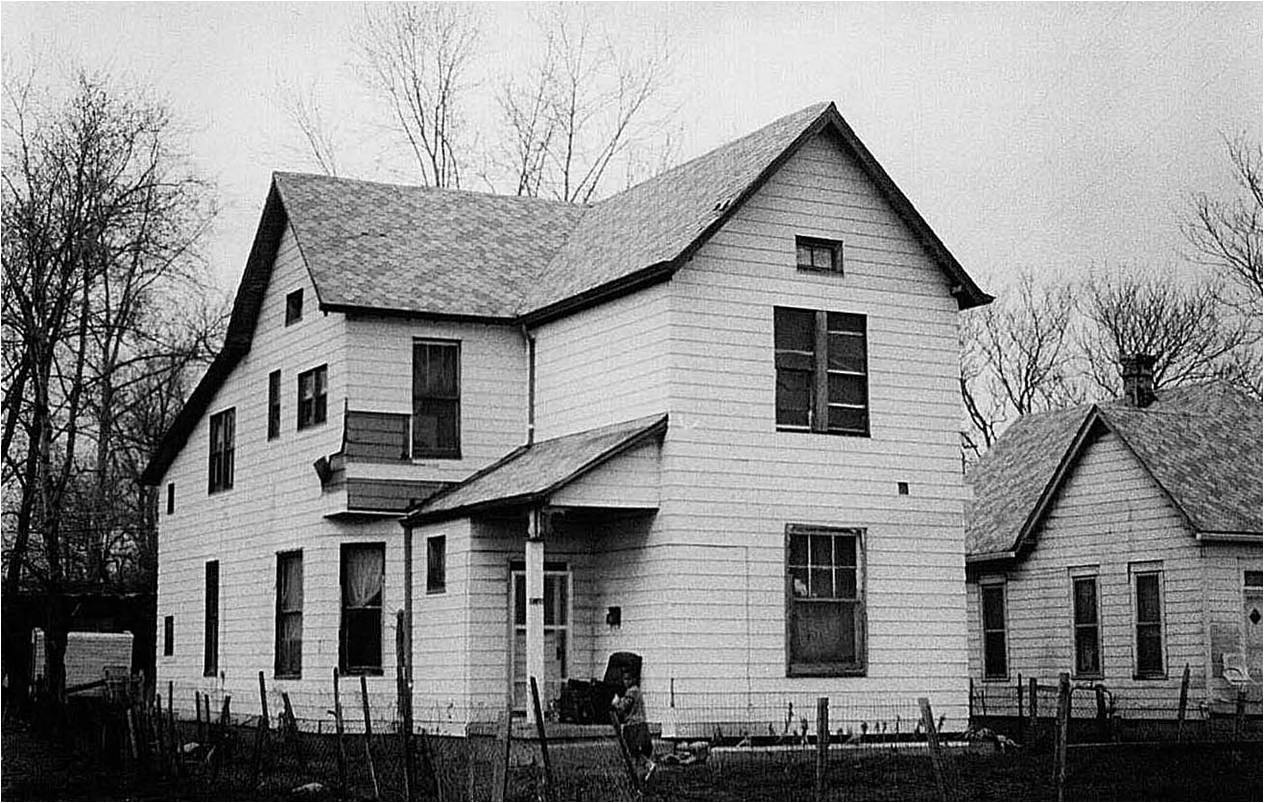 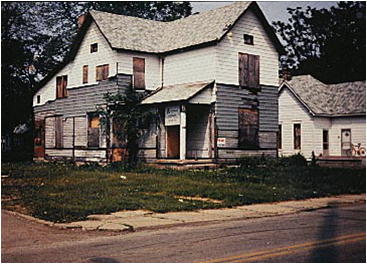 By the time “C.H.I.P.” (Cottage Home Investment Properties) purchased this house in 1988, layers of asbestos and aluminum siding obscured any hint of architectural charm. Between 1984 and 1988, thieves had stolen the metal siding as high up as they could reach. A young couple bought the house and started restoration, and all seemed fine until the couple divorced and abruptly sold the house to a nearby business. Although the business did not use their adjacent parking lot, they decided to raze the house for an even larger empty parking lot. 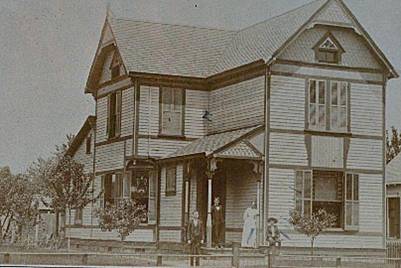 The unusually detailed interior woodwork led to research and contact with descendants of Gustav Neerman, the home’s builder, who shared this circa 1900 photograph. Neerman was a professional woodcarver who carved the doors of the Indiana State House and interior woodwork of Crown Hill Cemetery’s Waiting Station, the Pasadena Depot, and many residences in Indianapolis and California. A business card advertised “special furniture made to order – anything new, odd and artistic.” His family lived in this house for eighteen years before moving to California in 1910, and the carriage house was Neerman’s carpenter shop and also the stained-glass window studio of his brother Enoch. Many of Gustav’s woodwork design sketches and stencils, along with a wood chisel, were found in the attic and are now stored in the neighborhood archive. 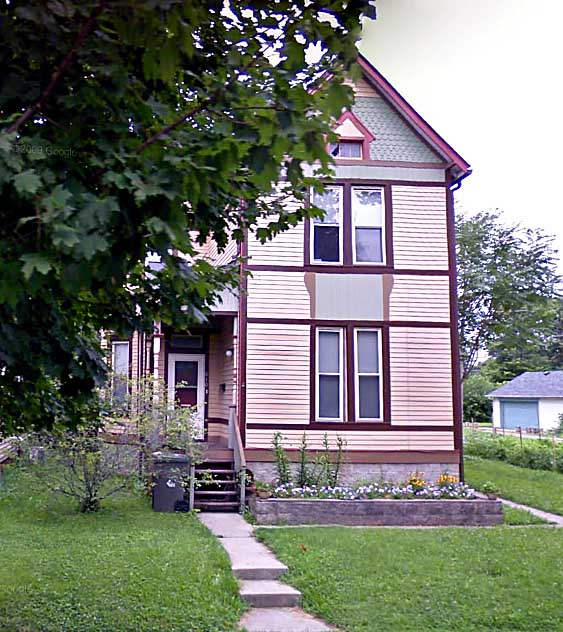 Fortunately, the business agreed to donate the house which was moved with the help of Eastside Community Investments, Indiana National Bank, and Indiana Landmarks. The house was left as a double and has been continuously occupied since 1990. 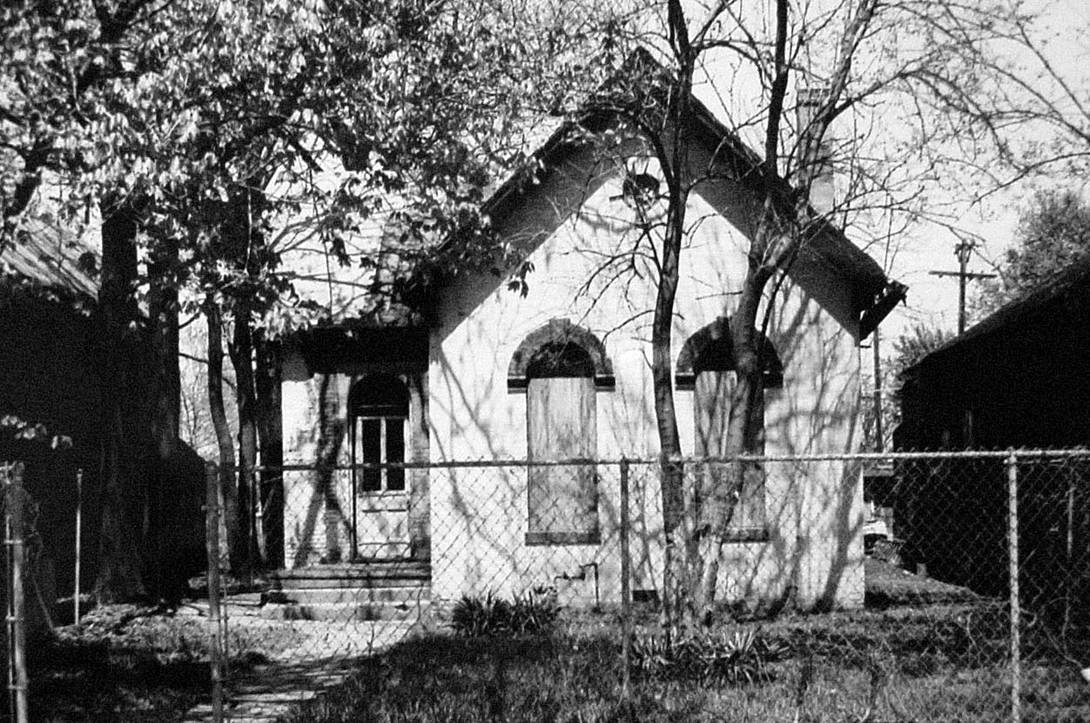 When neighbors surveyed the neighborhood in 1984, this house was abandoned with the back door standing open. Despite the overgrown yard and extended lack of maintenance, the house had a charm and was unusual because it was one of only two brick dwellings in the area. Although some neighbors thought the house was not worth saving, it was structurally sound and buyers came forward to restore the home. 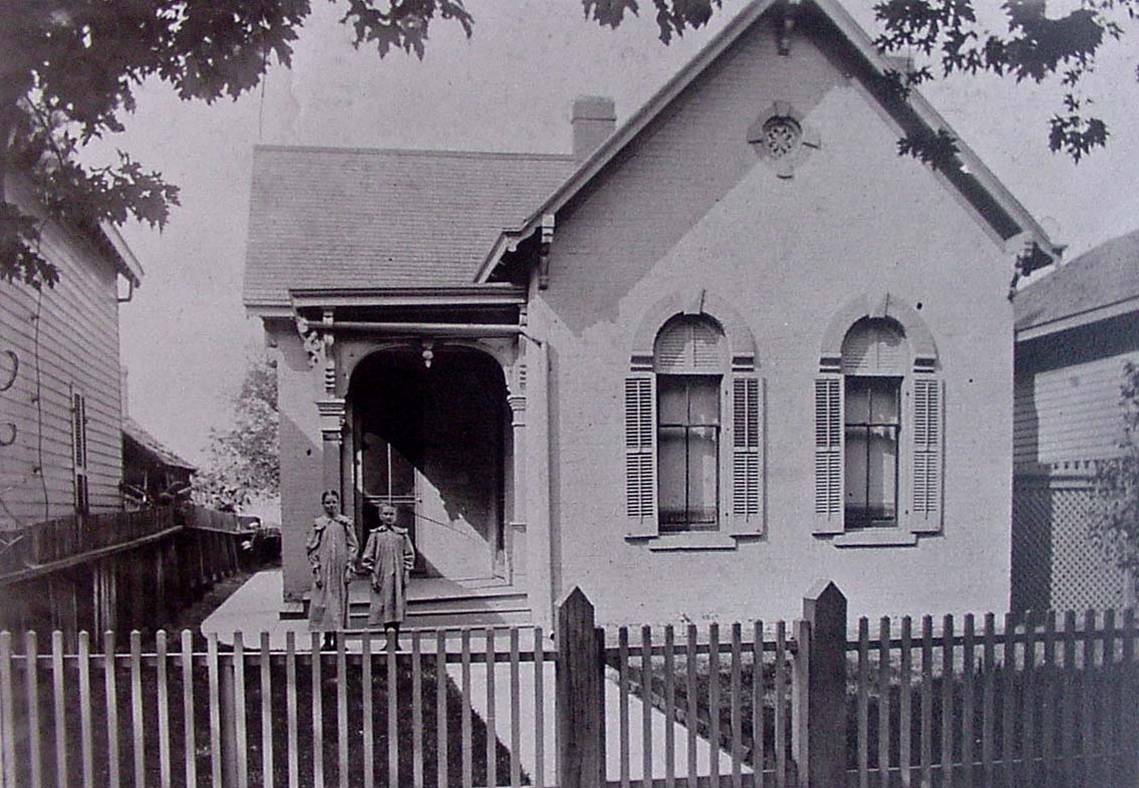 Research in old city directories and obituaries helped us track down the history of the house. Frederick Prail, a brickmason, pulled a permit in July 1871 to construct a brick dwelling valued at $1,000. Indianapolis experienced a building boom in the 1870s, and he likely built it on speculation. After a decade as a rental property, the house was bought by Irishman James McCarty, who was a foreman at the Capital City Planing Mill. He married Anna Corrigan and had three children, but sad events occurred within the next three years to leave Anna the sole occupant of her home. Their only son, Johnny, died of an illness in October 1889. Shortly after Christmas the same year, James was stricken by an appendicitis attack. He died on the kitchen table as a doctor attempted emergency surgery. Both of their little girls died of diphtheria in early 1892.

In 1894 Anna married the widower Daniel Haley, an Indianapolis policeman, who moved in with his three children (two are pictured here in this ca. 1895 photograph). Despite the early sadness, Daniel’s grandchildren shared their fond memories of the house. The backyard had a two-story red barn where Anna kept chickens. Most of the cooking was done in the summer kitchen that was attached to the back of the house. The inside kitchen had a huge coal stove and no sink, so water was carried from the indoor bathroom, one of the earliest on the block. The front rooms, where they played with their many dolls, are remembered as being quite elegant with dark green and red wallpapers and carpets and old horsehair furniture. Anna and Daniel resided in the house for the rest of their lives and family members owned the house until 1946. The building to the left, then a house, has been a tavern since the early ‘teens known as Anackers, the Mahogany Bar (“The Hog”), May’s Lounge, and most recently the Dorman Street Saloon. 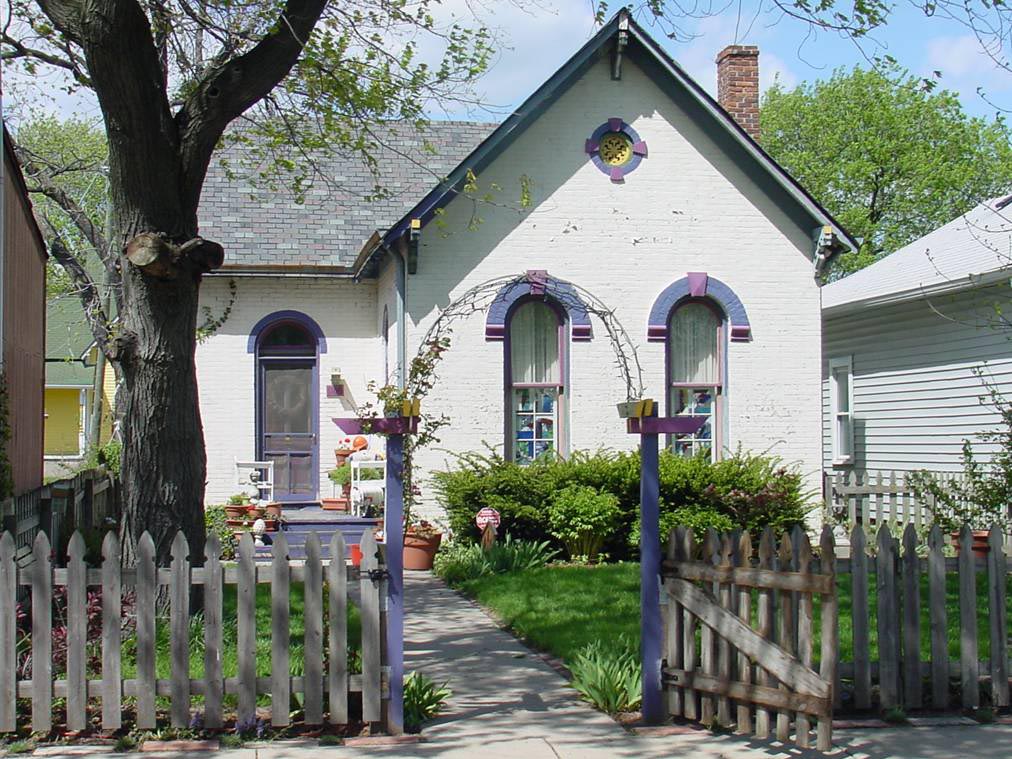 After 1946 the property changed hands many times but has been owned by the same family since 1993. Bright colors, a picket fence, and landscaping make this home one of the best on the block.

The history of this home is not yet known, but this is a great example of working with a neighborhood business and the difference it makes to remove old siding and reconstruct the original window openings. 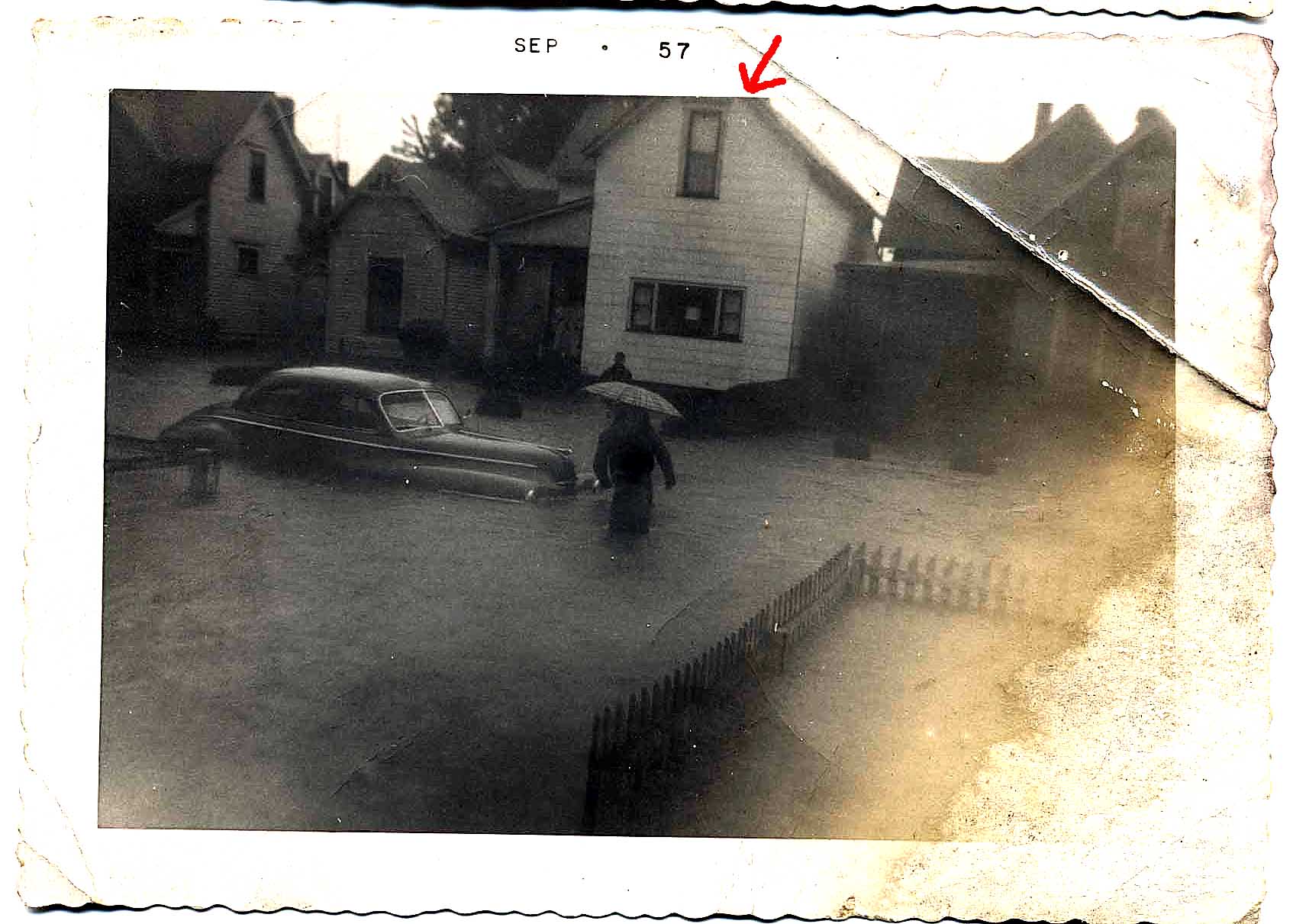 During the 1957 flood, this home stood in the middle of a block of six houses on the south side of Ninth Street near Highland Avenue. The original porch had been replaced, clapboard siding hidden under aluminum siding, and the two original front windows replaced with one picture window. By the 1980s it was the sole survivor on that side of the street and a layer of fake stone further belied any hint that this was a late 19th-century Folk Victorian house. (Tip of the day: I often find the best sources for house snapshots are the people who lived across the street. They stood on the porch and photographed their new car or their children on the first day of school.) 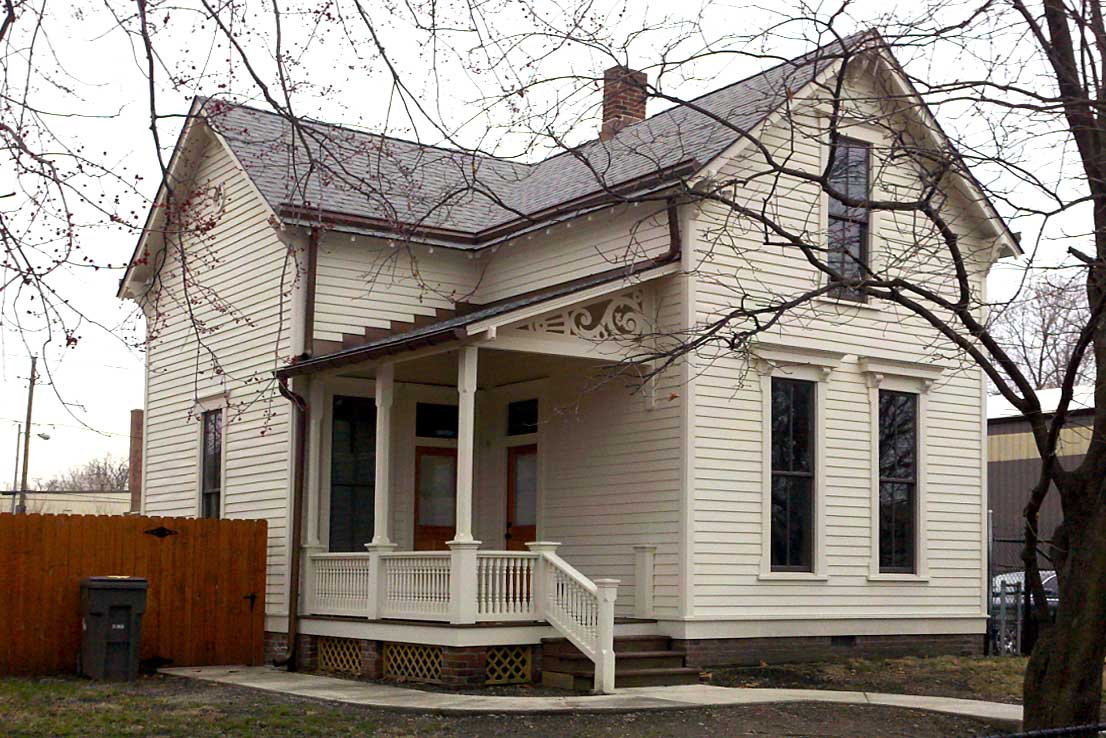 The adjacent AAA Roofing Company needed storage space for their green roof supplies and considered demolishing this house, but thankfully listened to the pleas of neighbors to save it. In 2009 former neighbor William Vant Woud served as general contractor and brought the house back to its original condition with a new porch, original window openings, and decorative brackets. Today AAA Roofing uses the restored gem as office space and stores their roofing supplies in the back half of the yard behind a privacy fence.

And so when I hear people refer to the structurally sound Lexington Street houses as too far gone, I think of these near losses…and the hundreds of downtown houses that were once considered blight. While their historic nature and whether they are “blight” can be debated, the bigger concern is that this block of Lexington is a nearly intact block of houses that is zoned D-5 (dwelling). While KIB has a stellar reputation and everyone wants to see their programs succeed, I worry where encroachment into the North Square neighborhood will stop. With hundreds of vacant lots in downtown Indianapolis, and property for sale just across Shelby Street, does it really make sense for a business to inch into a residential street and send three houses to the landfill to make room for tree storage?

When our economic and real estate slump ends, the proximity of these homes to Fountain Square’s thriving Virginia Avenue makes them very desirable for restoration, and I have no doubt that most North Square houses will be restored and occupied by property-tax paying residents if the houses can just survive a few more years.