A neighborhood is not just a collection of houses in one geographic area. It’s part of the identity of those who live there. It’s a patchwork quilt of stories–to the city, state and families. It can be a source of pride and show what we value. When it comes to our protected historic neighborhoods, it says: we care so much about the history of this place, that we will provide experts to help you preserve what’s left here in the most respectful possible way. Many people in historic neighborhoods want to know everything they find out about their home and especially seek photos–not just for curiosity, but also for restoration purposes.

If you have ever heard photo historian (and former HI contributor), Joan Hostetler talk, you’ve heard her offer a life hack for historic architecture fans trying to find those coveted photos: track down families who lived across the street. Evidently, photos were frequently taken in the front yard, offering views of whatever buildings stood across the street.

If you lived at 1475, 1471 or 1469 North Delaware, you would have wanted to get in touch with the family of Katherine Watson Atkins, as there were a number of darling photos taken of her in the front yard of the home she and her parents shared with her grandparents, Mr. and Mrs. Henry Scot Fraser. 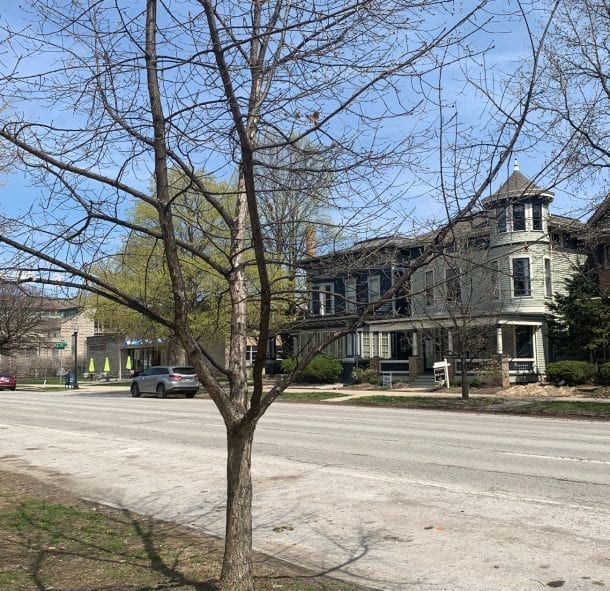 In the small series of photos, Miss Katherine is the main subject, against a backdrop of this block of Delaware circa 1904. Since Katherine provided her own narrative in an oral interview in the possession of the Indiana Historical Society, let’s focus on some of the neighbors who inhabited the homes featured.

The facades of both 1475 and 1471 North Delaware look quite different, but according to the Old Northside Historic Area Preservation Plan, this pair of houses have both been “modernized” from their original look. Both are said to have been built around 1872 by Frank Kennedy and used as rental units for a period of time. 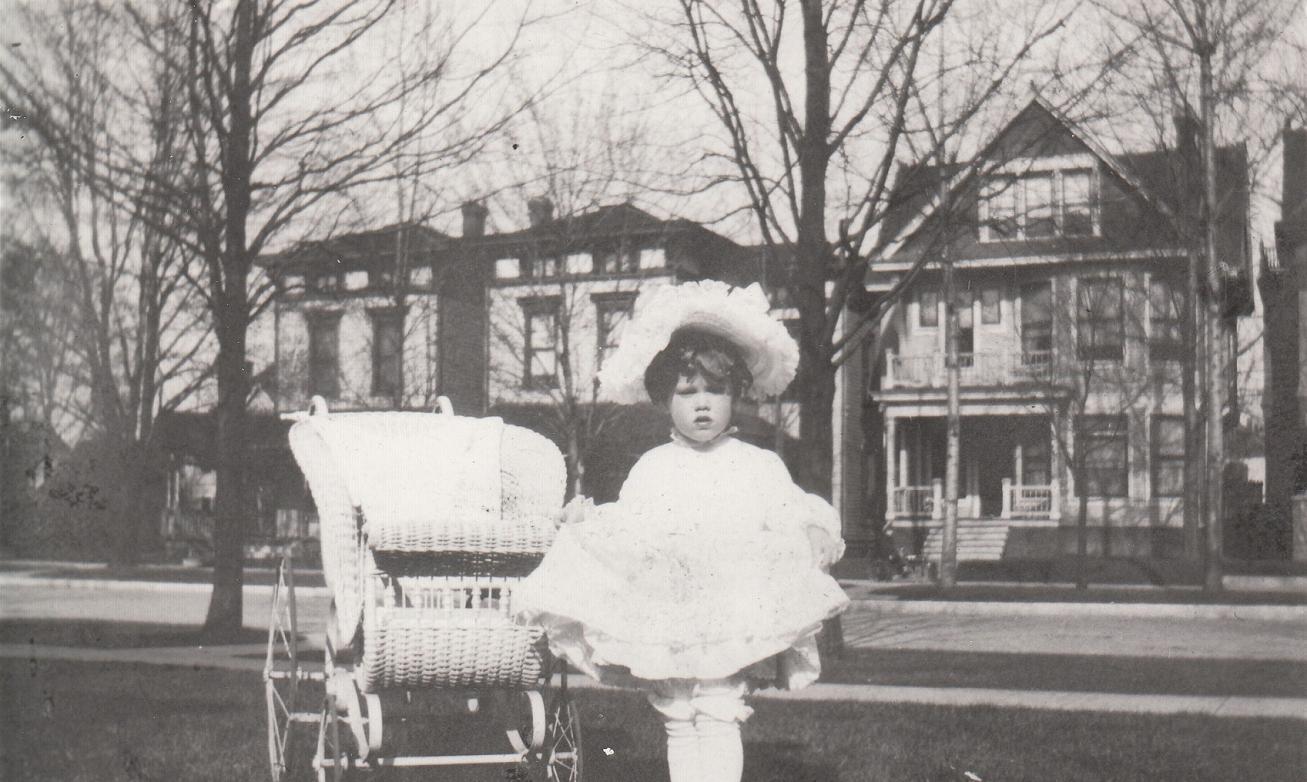 1475 sits on the southeast corner of the intersection of Delaware and 15th streets and was purchased by John D. Brosnan around 1890. His brother, Daniel moved into 1471 in 1892. The two brothers living in mirrored Italianate homes on North Delaware Street also founded a dry goods store, Brosnan Brothers together in 1889. They surely wagon-pooled to work together to the various locations there store occupied over the years it was in operation. Unfortunately, their store suffered more than one fire and by March 1902, John started a cloak and suit emporium, after severing ties with his brother in their business. Coincidentally, another fire destroyed Daniel Brosnan’s remaining business and he filed bankruptcy in April 1902. And yet. By November 1902, Daniel had regrouped and launched his new shop in the Claypool Hotel, even before the hotel was open for business. Daniel’s family lived at 1471 North Delaware for more than 50 years, and his bother’s family wasn’t too far behind in their number of years at 1475. 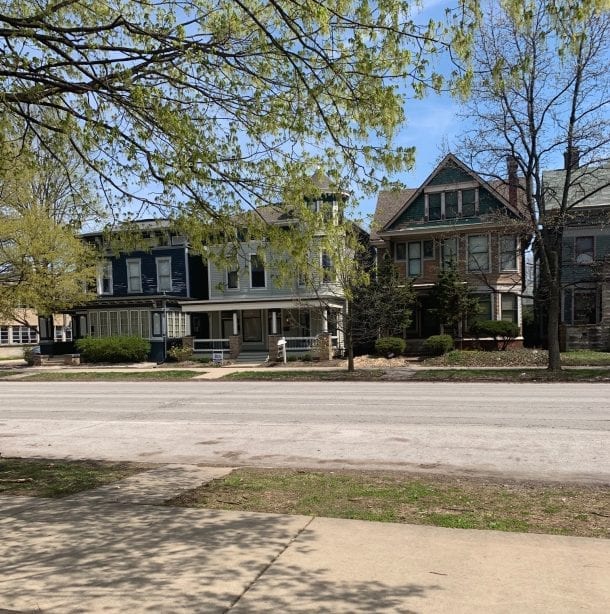 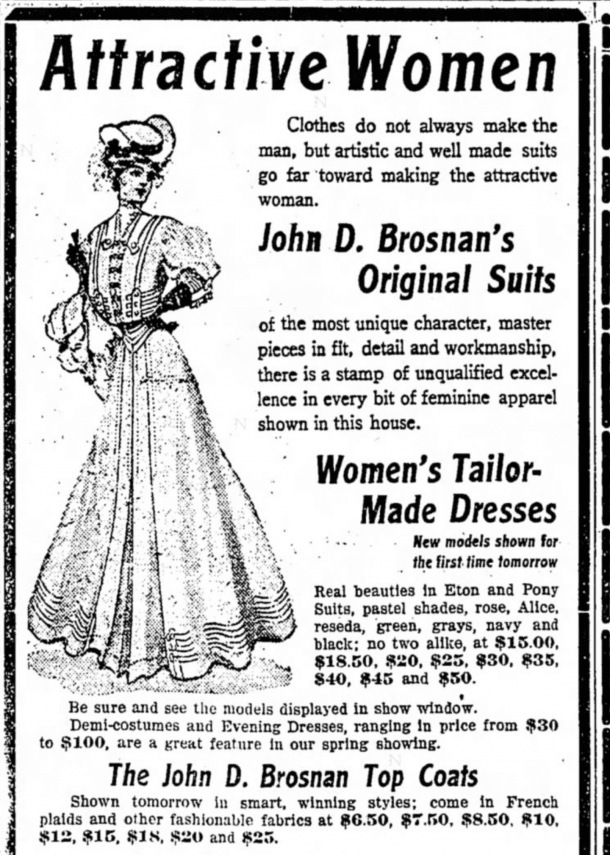 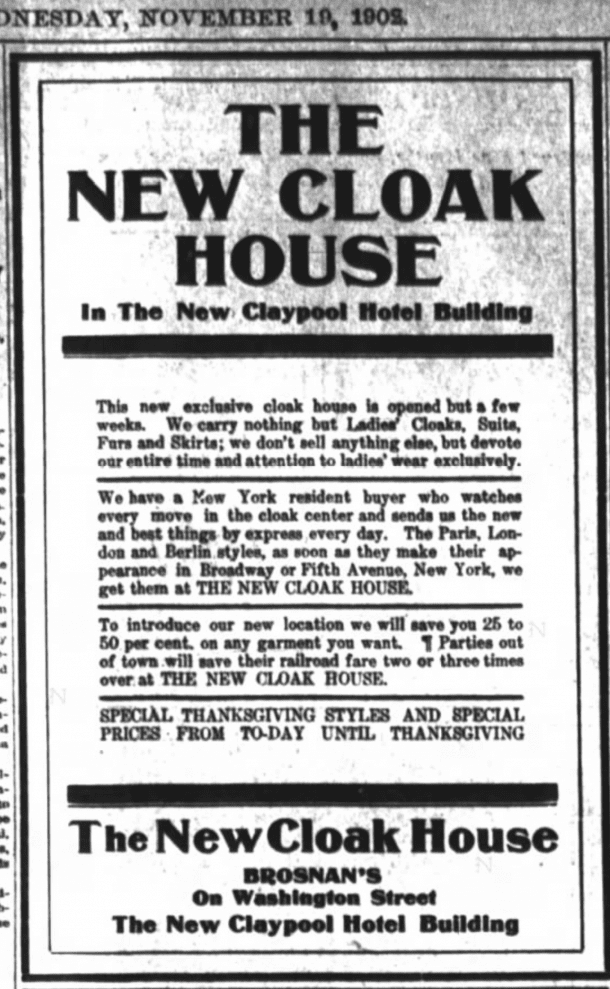 The home on the northeast corner of 15th and Delaware streets at 1501 North Delaware was occupied by the Elisha Brattin Holloway family from 1890-1910 approximately. Elisha died in 1908 at the home on February 24 at age 85. He moved to Indianapolis in 1876 with his wife Martha Ann Culbertson Holloway and engaged in the real estate business. The home was still standing when Frank and Ethel Cleland lived there in the summer of 1956. By 1957, the property was listed as “classrooms” owned by the church.

1469 North Delaware was the home of Joseph H. Pattison, built circa 1895. The Old Northside Historic Area Preservation Plan says Pattison was a partner in a shirt and overall factory and left that business around 1897 to work in real estate and mortgages, and with William F. Churchman organized the Financial Exchange, specializing in real estate loans. He and his family lived in this home until he died in 1945. 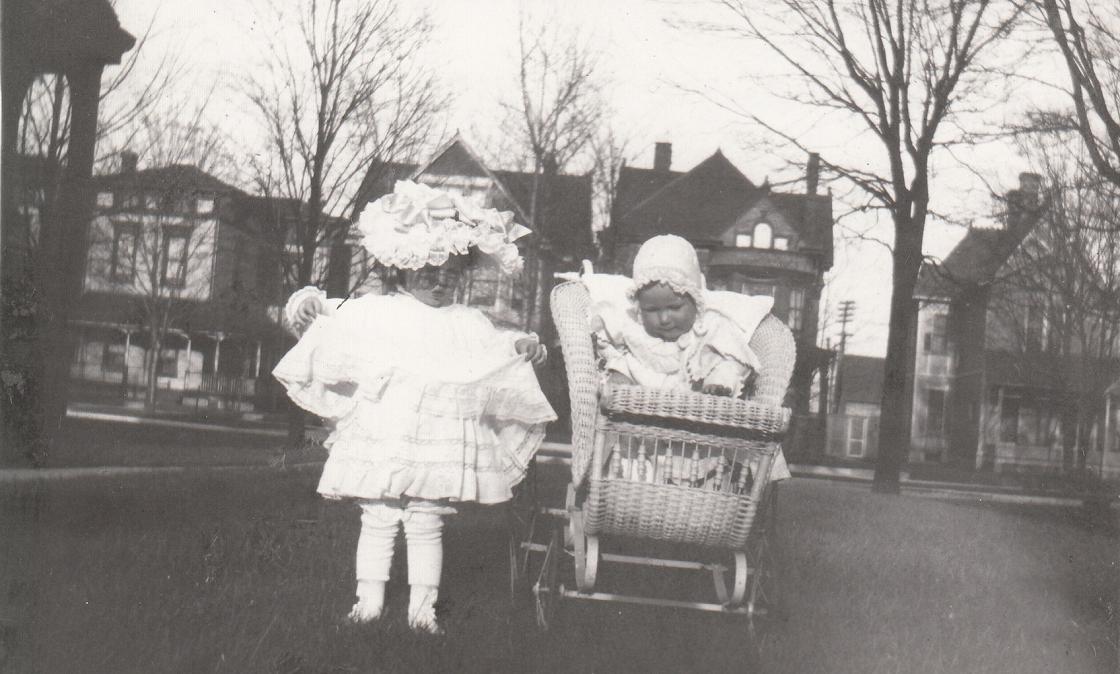 Also from ONS Preservation plan, 1465 North Delaware is said to have been built by Charles A. Dale, who did not live there for long and was followed by Frank F. Churchman, of Jeffery, Offutt & Co. Later, Samuel Miller, the son of William Henry Harrison Miller, President Benjamin Harrison’s friend, neighbor and attorney general lived there. Miller’s ownership was followed by T. A. Moynahan who owned a number of apartment buildings like the Admiral, Commodore and Ambassador and who built the 11-story Chamber of Commerce building.

The house that was located at 1459 North Delaware Street was replaced with an apartment building around 1923, according to the ONS Preservation plan, though “Delaware Manor” first appears in the city directory in 1918, and ads with that name appeared in 1917. In February 1926 the company was dissolved, but the name continued to be used.

Even the 1898 Sanborn looks confused about the alley between 1459 and 1465 North Delaware. Likely due to (incomplete) updates to this 1898 map. (Image courtesy IUPUI Digital Library)

Before the house at 1459 in the above photo was replaced with apartments, there was one fiery incident that caused quite a scene. On June 3, 1902,  “Came to Blows with Councilman Holliday,” the headline read, “Over the Closing of a Northside Alley.” 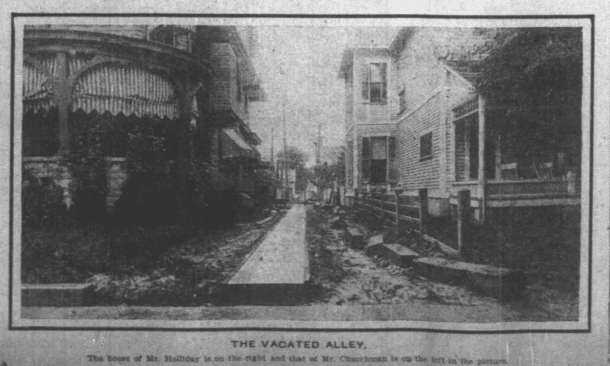 The alley that previously ran between 1465 and1459 North Delaware Street.

Jacquelin Smith Holliday lived at 1459 North Delaware at the time. He was a city councilman. And–spoiler alert– the result favored him. 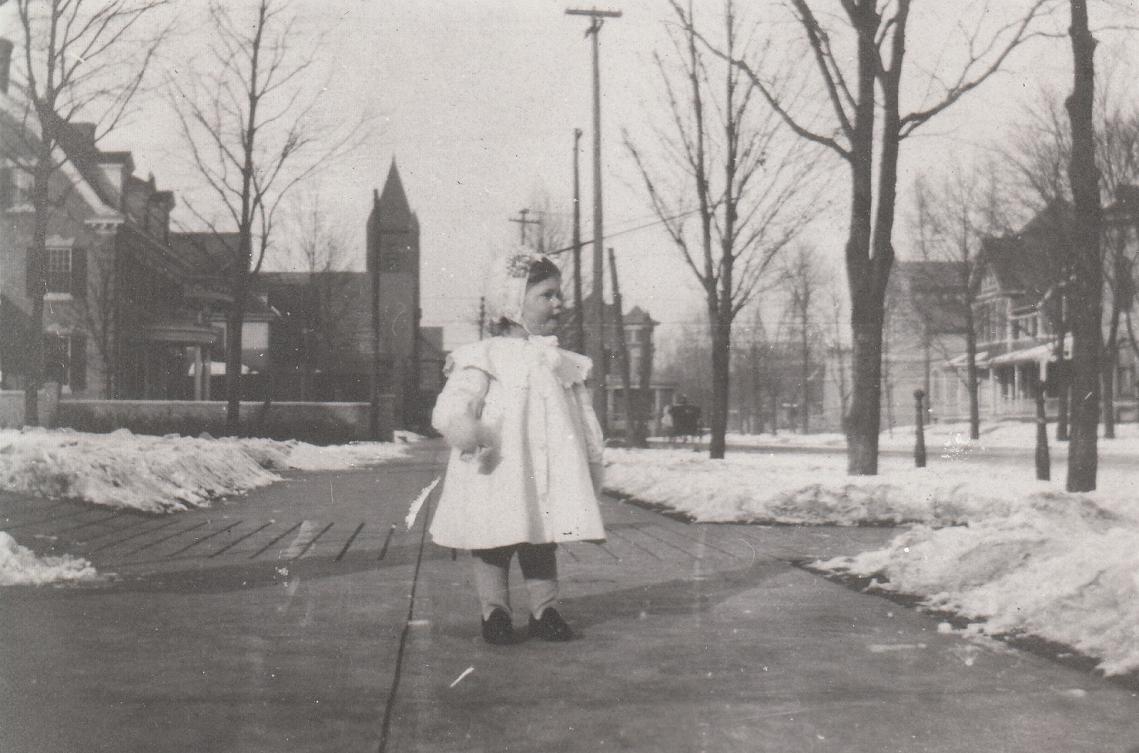 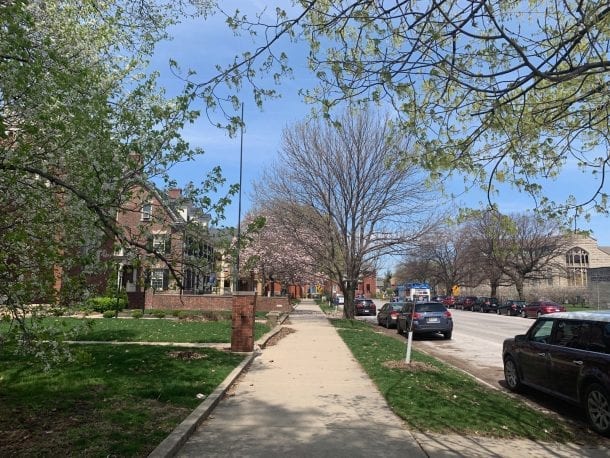 Spring is hindering the view of some of the same buildings and some alterations to the streetscape. Image: North Delaware Street, April 2019. (Tiffany Benedict Browne)

The home at 1442 (previously 1422) North Delaware is no longer standing, and the time this photo was taken, the Reid-Dickson castle had yet to be built at 1456 North Delaware. 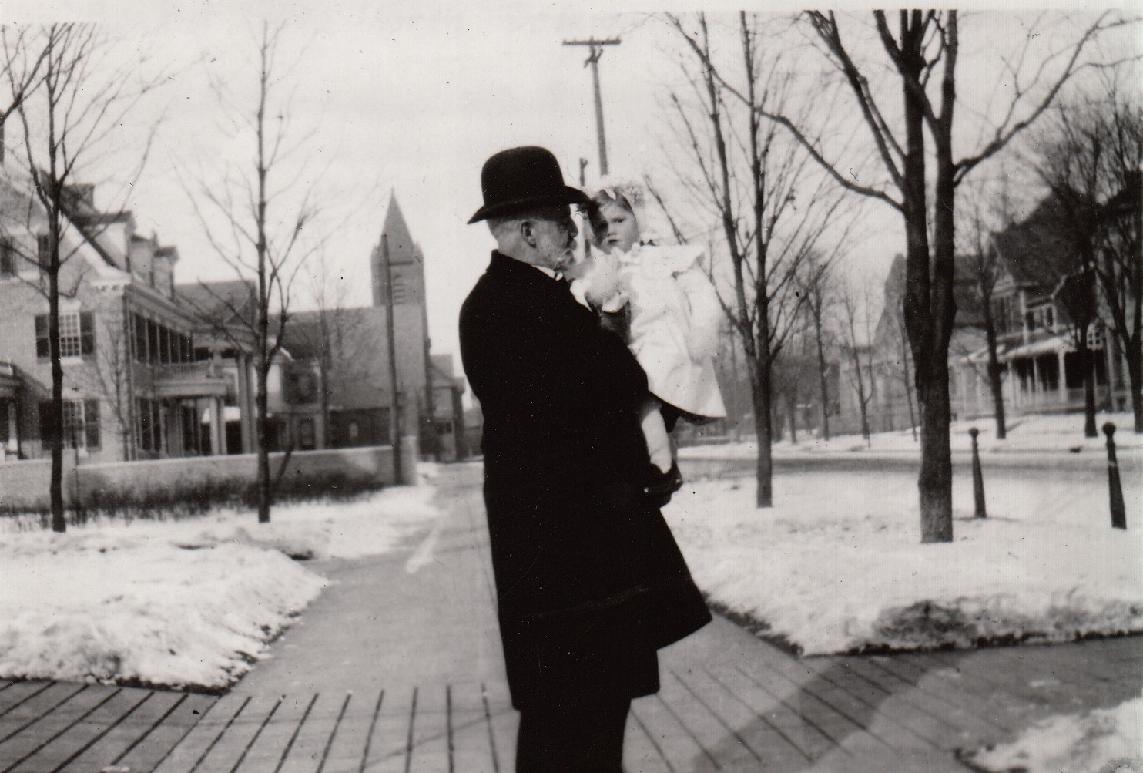 Henry Fraser, step-grandfather of little Katherine in front of their home at 1422 N. Delaware, looking north

Every neighborhood is an ever-changing, living, colorful mosaic, that adds or subtracts to what is left to each generation.

Comparing the views of yesteryear and today is a fascinating test of observation. What stands out most to you?