The location, scale and wares have changed, but the premise remains the same: gather Indiana’s best art, agriculture, science and industry for concentrated display and consumption. The State Fair is a coveted Hoosier tradition begun in 1852 in Military Park.

The event flirted with a handful of other locations in years following–even outside the capital city–but in 1860, the State Fair and Exposition staked out land within the boundaries of today’s Herron-Morton Place neighborhood for its permanent home. 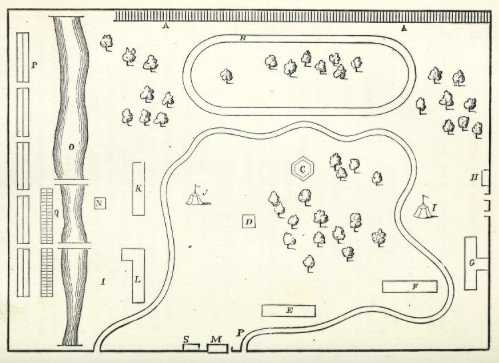 A most notorious chapter in U.S. history almost immediately thwarted the annual Indianapolis event. The Fair’s new home was requisitioned for Camp Morton in 1861, where many Hoosier lads started their Union Civil War soldier experience and later, where a number of Confederates soldiers ended theirs.

While no shred of State Fair history remains in Herron-Morton Place today, the Civil War history reminders live on in small markers at the corners of 19th and Talbott, 19th and Central and 21st and Talbott, and a larger, more descriptive one in front of the neighborhood park. However, the Indiana State Fair did take place on the same 36 acres in 1860, 1866, and from 1868-1891.

The imposing Grand Hall Building (pictured above) was composed of one million bricks and designed by Edwin F. May, the same local architect of Indiana’s current State House. Beyond the primary building, smaller structures peppered the landscape, interspersed with a variety of animal sheds, and on the north, a half-mile race course. All of this (and more!) fit inside the boundaries of what is today, 22nd to 19th streets, and Central Avenue to the alley west of Delaware. 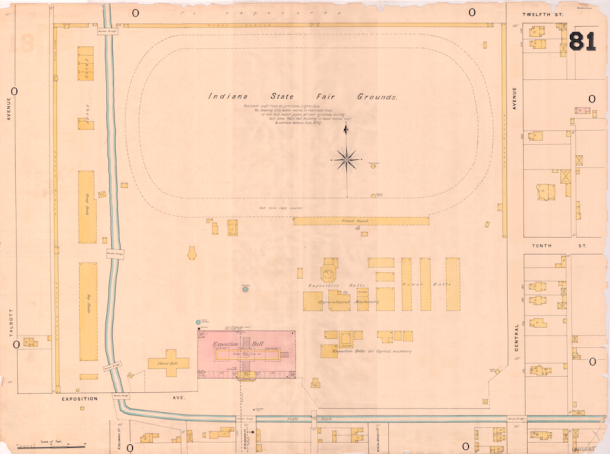 Back then the month-long fair was known as “The Indiana State Fair and Exposition,“ and tens of thousands crowded the buildings to see the pumpkins, patented butter churn, and women’s work; to witness popcorn men beckoning fairgoers to sample their heavenly smelling wares– answered by the discordant echo of lemonade men doing the same. From organs to stoves, beets to apples, clothing to carpets, all sandwiched between brass bands intermingled with a spectrum of every-aged visitors–the latest advancements and novelties delighted and showcased what was possible in the midst of the industrial revolution. Check out a sampling of items that appeared at the fair at the time of this Exposition Building (and later).

Today’s 19th Street debuted on Indianapolis maps as “Exposition Avenue” and merely stretched from Talbott to Peck Street–the alley east of New Jersey Street. Fronting Exposition Avenue, between 1873 and 1891, was one of the grandest Marion County buildings of the time. Centered on the south facade under a mansard tower and U.S. Flag, Alabama Street’s northward ascent ended at the front doors of the Fair’s “Grand Hall.” 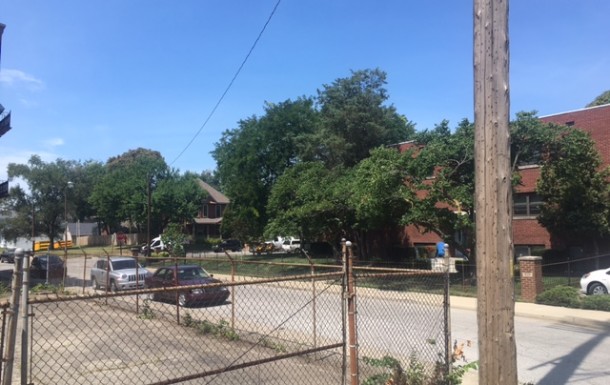 It was a two mile trek from the city’s epicenter, so how did folks get to the fair in the 1870s? A local newspaper described the task: “At Illinois and Washington streets there was a jam of street cars and crowds of people filling to overflowing the means of locomotion prepared to take the eager seekers to the Exposition. Then there were numberless carriages and wagons and extemporized vehicles of every description, the drivers of which entered into a lively competition as to who should crowd their respective vehicles the most, at the same time losing no opportunity to decry those of their neighbors. The cars could hardly be distinguished, they being black with eager humanity who clung to the steps, windows, brakes, in fact wherever they could catch by even an eyelid.”

When they did arrive, as seen above, tree stumps marred the street. This is an often overlooked detail of early streets carved from what had been stretches of tree-shaded wilderness. Horse carriage axles were built intentionally high due to the pervasive stump issue. It was challenging to get there, but the people were determined to get there, visiting from every corner of the Hoosier state. 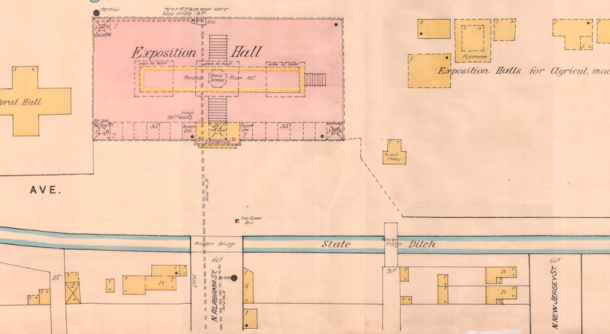 Before the impressive Grand Hall was built, the 1871 State Fair program foreshadowed the coming construction:

“…The State Board, at their last session, purchased additional lands, and are determined to spare no labor or expense in beautifying and substantially improving their Fair Grounds. The improvements the present year will cost over seven thousand dollars. The miscellaneous and furniture halls, now being erected, are of the most modern style, and for convenience and comfort and the display of the various articles in their departments, will add much interest to our Fairs. The plan of the building is in the form of a cross; the part for furniture to be 150 feet in length by 34 feet in width; and that for miscellaneous articles in two wings of 50 by 22 feet each. The story will be 15 feet; and the total height of the building including the octagonal dome that surmounts the center, will be 40 feet. The entire building will be floored–twelve feet on each side of furniture hall to be raised platforms of eight inches, and subdivided by movable partitions so as to separate them into rooms or spaces for the display of carpets put down, and sets of parlor and other furniture. Twenty large windows are provided for the display of window drapery; and walls and ceilings will be plastered for the display of paper-hangings….”

“…To make room for this building, some of the unsightly old buildings heretofore used for the display of goods made by ladies, will be torn down; and when they learn what excellent accommodations the Board are providing for the exhibition of their skill and taste, we feel sure it will be appreciated to the extent of filling the hall. The aisles will be ten feet wide, with an area of twenty-two feet in the center, affording ample accommodation for visitors…” 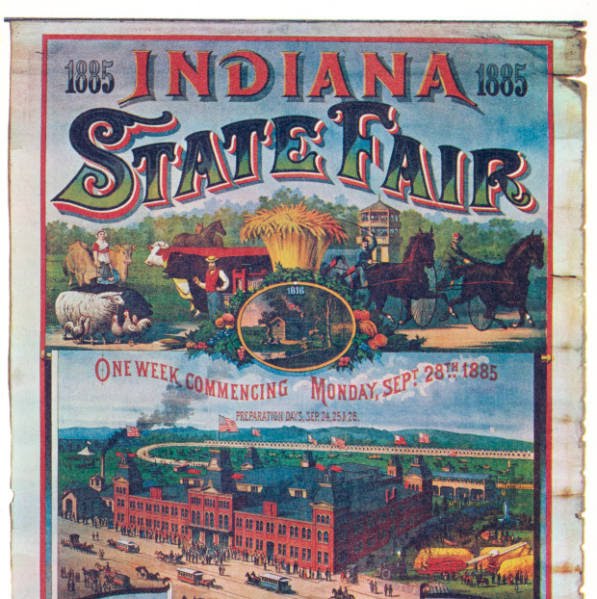 Plans did not unfold exactly as anticipated, since the building didn’t turn out exactly as described, and it wasn’t built until 1873. The “Grand Hall” was 308 feet long and 150 feet wide. It cost approximately $100,000 (including decorations) and the architect, Edwin F. May was paid $500 for his services.

In January 1892, the Grand Hall was razed, as the land was platted into Morton Place, a tony neighborhood with esplanades stretching from 19th to 22nd Streets on Delaware, Alabama, and New Jersey Streets.