Defining “Nora” is a little bit like nailing jello to a tree: slippery, frustrating and inefficient. However, today we persist!
Regardless of whether you describe the Far-Northside Indianapolis location (generally considered to be contained within Meridian Street on the west, Castleton on the east, Ravenswood to the south, and the Hamilton County line to the north) as a city, suburb, community, neighborhood, hamlet, town, village (or if you’re like me and you just call it… HOME) here’s what I can tell you for sure: At this writing, Nora is 141 years old. 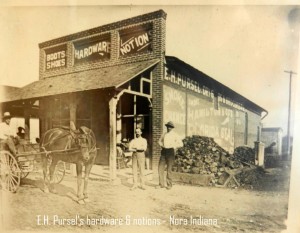 Before Nora was “Nora,” though, the somewhat swampy and heavily-forested area was home to native Americans largely from the Delaware (or Lenape) tribe who farmed and hunted abundant wildlife along the White River and tributary creeks. As these native peoples were forced from the area, the forests were leveled gradually and replaced with farms. 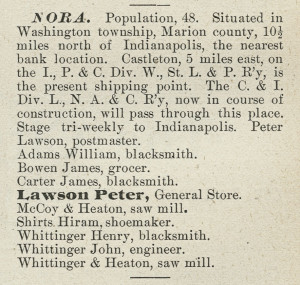 In the early 1800s, parts of the general area were called Sutton’s Corner or Buck Town. However, on January 4, 1872 a charter (a copy of which is rumored to be located in the Nora Library) establishing a post office at 86th Street and Westfield Road was granted to one Peter Lawson, a Swedish immigrant living in the area. The charter clearly reads that Lawson would be the postmaster of the new office at Nora. Besides the post office, the area boasted a general store, grocery, blacksmith, two-room schoolhouse, saw mill, churches and feed mill on land originally granted to an Abraham Bowen. None of the original structures remain. 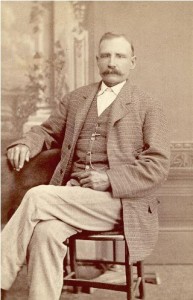 Even the origin of the name “Nora” excites some uncertainty among historians. Certain publications report the area was named for the daughter of an early Monon railroad contractor, John B. Greene, who was hired to build passenger stations. The timeline doesn’t support that notion since the Monon Railroad arrived in 1883, well after the charter was established. Some historians have claimed Peter Lawson named the area after his own wife (though that can’t be accurate since Lawson family letters reveal he was married twice, and never to a “Nora”). However, Lawson had emigrated from Nora Parish in Sweden and for that reason, historians often credit the name to Lawson. 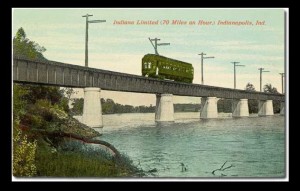 An Interurban car. Nora was once a stop for both the railroad and Interurban lines. Click to enlarge. (Image: Collection of Tom Keesling, Hoosier Recollections).

Though the railroad, and eventually the Interurban line, both made stops there, for generations Nora remained nothing more than a sleepy rural hamlet, not much more than a convergence of the important-but-unpaved roads: S.R. 431 (Westfield Boulevard), U.S. 31 (Meridian Street) and S.R. 100 (86th Street). Then, as Indianapolis rapidly expanded in the 1950s post-war building boom, the Nora area succumbed, as well. 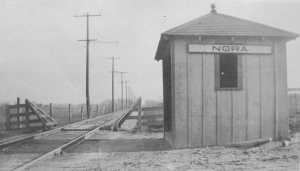 The Nora Interurban stop. Images of Nora-area buildings and families are rumored, rare and largely undiscovered in personal collections. This photo was discovered on the Facebook page of an Indianapolis history group and used with permission. Hopefully, as Facebook’s “graph search” and hashtagging (#) becomes more prevalent, content will become searchable and therefore easier to access.

Though it’s been part of the greater Indianapolis metropolitan area since city and county governments consolidated in 1971, Nora doesn’t have firm boundaries because it was never incorporated. 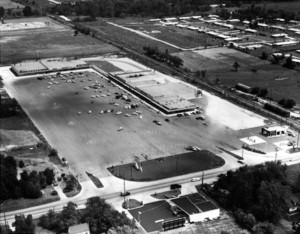 Nora Plaza circa 1960 – while the Nora area was still largely rural.

Tell us: what are your memories of Nora? Treasure troves of Nora ephemera are fabled to exist in private collections of neighbors and friends but scant photographic material can be found in the usual library repositories. If you are the owner of such historical materials, please don’t leave them to molder in hidden shoe boxes! Share them with the area libraries and historical societies for generations to enjoy… and with us here! 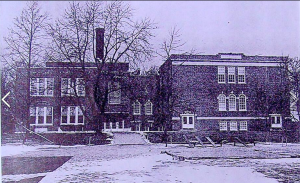 The old Nora Elementary School stood in the area of 86th Street and Westfield Boulevard near what is now North Central High School. Circa 1958. Image: Mike Boyer.

Special thanks to Tom Keesling of Hoosier Recollections and Sue Zobbe of the Sherwood Forest Neighborhood Association in… Nora.