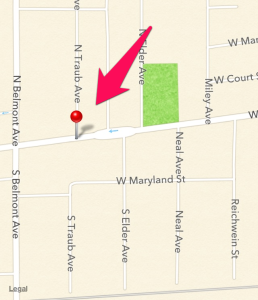 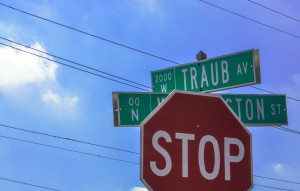 Jacob Traub was born in Wurtemberg, Germany in 1811, and came to America with four of his siblings on a 71-day voyage, landing in Philadelphia.  While there, he found work as a shoemaker.  He married Frederika Stroble, who was also came to America from Wurtemberg with her two siblings.  As the Midwest continued to grow, he moved to Louisville and then to Charlestown to continue his career as a shoe and boot maker becoming one of the most successful and wealthiest businessmen in the area. 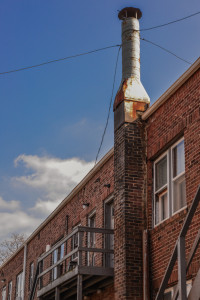 A fun perspective of the apartments on Traub.

With his business booming, he set his sights on Indianapolis and bought 35 acres on West Washington Street in 1847.  On this land, he built a log cabin and concentrated on farming, gardening and supplying timber.  He eventually sold part of his land to his son William and developed the rest into streets and city lots, making him one of the richest residents of the time.  He eventually remarried to a woman named Catherine, died at 72 in June of 1881 and is buried at Crown Hill Cemetery.

William, one of eight children, was born July 2, 1843 in Charlestown and was four when his family moved to Indianapolis.  While a young child, he attended the public schools and assisted his father with his gardnening enterprise.  He later married Joanna Hardin, born in Marion County in 1847, and had two children Henrietta and Emma. 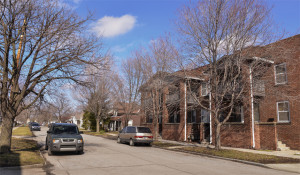 After marrying, he settled near the family land, and then bought 10 acres of his father’s land, and and worked in the gardening business, shipping their products to eastern markets.  He built a home on the property in 1876, but in 1884 decided to begin subdividing his land, later known as the “W.H. Traub Addition.”

What’s in a Name: Warman Avenue