What’s in a Name: Warman Avenue 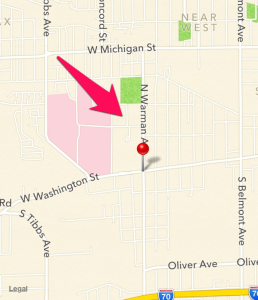 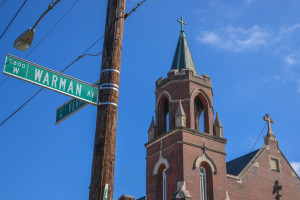 Street sign for the 400 block of Warman Avenue shows St. Anthony’s Church in the distance.

Warman was once the home of two brothers, Henry and Enoch Warman, who were early settlers in Marion County.  The family was one of the prominent families of the near Westside of the city along with the Flacks, Holmeses and Kings.

Henry Warman, a Virginia native, and his wife Nancy Parsons Warman of New Jersey, were married in Wayne County, Indiana and had nine children.  In 1833, the family moved to Marion County and settled on the near west side of the town.  Henry died in 1854 at age 54, and Nancy died in 1889. 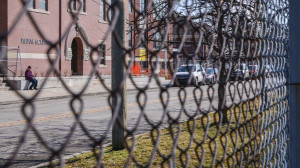 A view of Warman Avenue from inside the fence of Bahr Park. Padua Academy, a K-8 catholic school recently converted to a charter school, can be seen pictured in this image.

Enoch and Henry arrived in Indiana before 1820, settling in Wayne County and purchasing land patents in Hamilton and Marion counties.  The Warman homestead was located at what is now the 2300 block of West Washington Street. 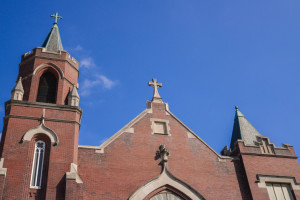 The steeples of Saint Anthony of Padua Catholic Chruch on Warman Avenue are pictured. Dedicated in 1891, this was only the 8th Catholic Parish in Indianapolis and the first of its kind west of the White River.

Henry’s son Enoch, born December 29, 1836, would go on to be a partner in Warman, Black, Chamberlain & Company, which conducted sales at the Union Stock Yards, founded in 1894.