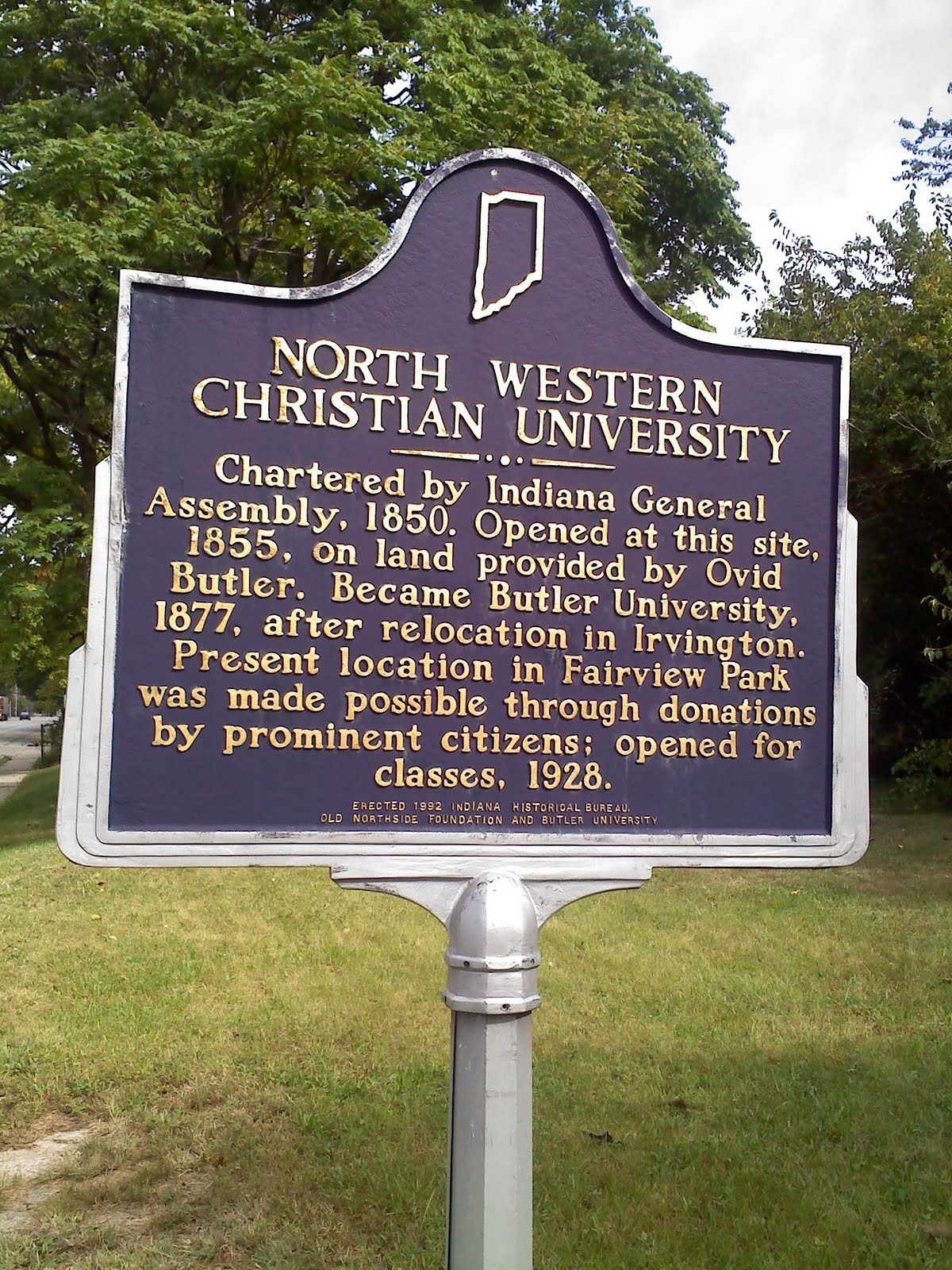 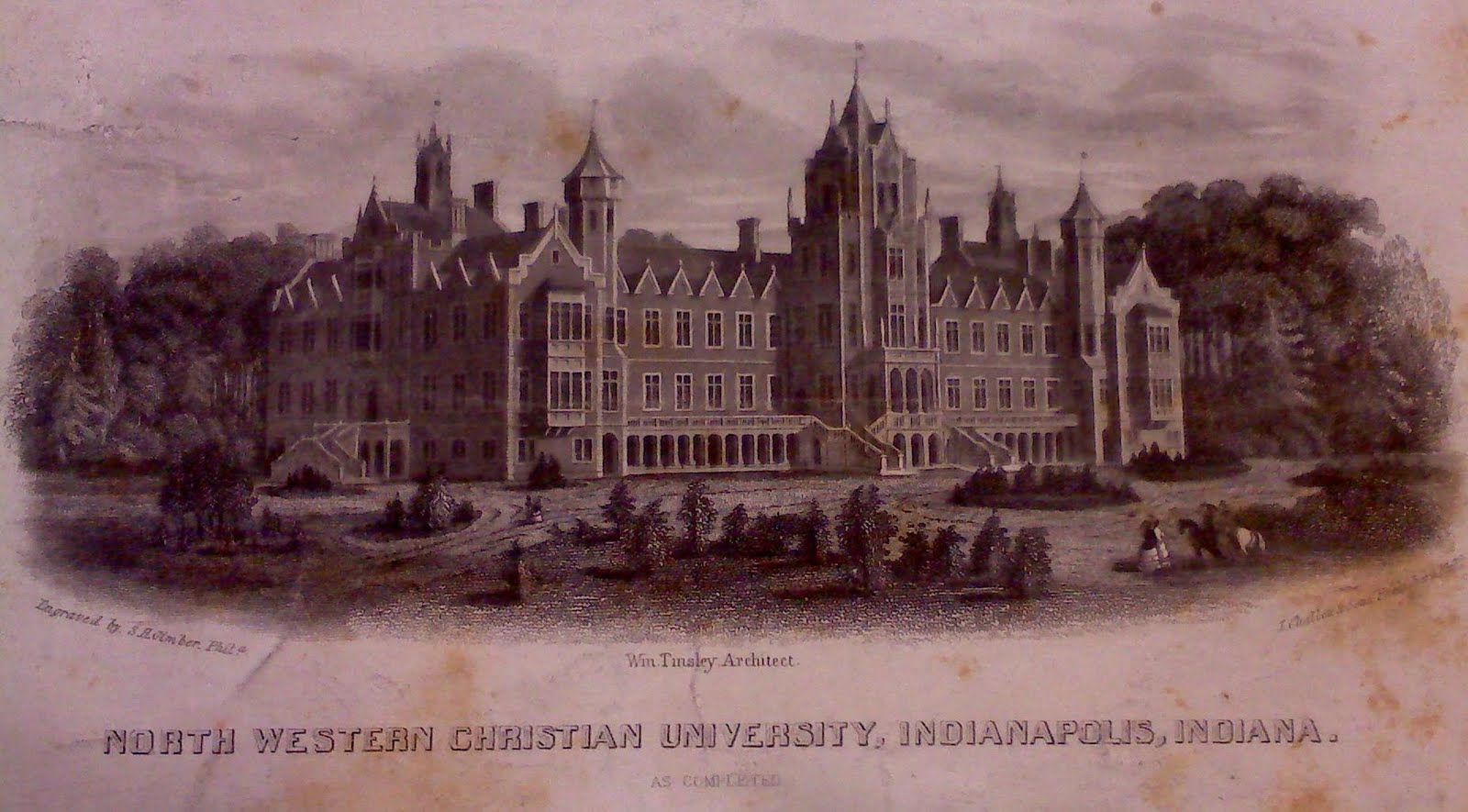 Rather than Butler Bulldogs, imagine Northwestern Cardinals or some such mascot adorning the hats, license plate frames and sweats of Indy youth. It might have gone down like that, had Ovid Butler had his way.
Despite his impassioned protestations, Northwestern Christian College adopted the surname of Mr. Butler, one of its staunchest supporters, in 1877. The first board of directors for the college was formed in 1852. Ovid Butler offered a 25 acre site at the northeast corner of College Avenue and Home Avenue—now 13th Street. Architectural plans for the college’s main building were prepared by William Tinsley of Cincinnati– he, a onetime president of the National Association of Architects who also designed Christ Church on Monument Circle. On November 1, 1855, Northwestern Christian opened to 40 students in an area still identified 150 years later by the name “College Corners.”
Northwestern Christian, now Butler University, holds the distinction of being one of the first institutions with college standing in the United States to offer equal educational opportunity to women. The college might also rightfully brag of its progressive nature where female employees are concerned, since Northwestern also employed the second woman ever to hold a position on the faculty of an American college. Perhaps you’ve heard of Catherine Merrill, Demia, Butler Chair of English literature? Her father, Samuel Merrill was one of the first to settle in Indianapolis, arriving by carriage from Corydon with the state’s ledgers and assets as state treasurer.
Ever found a book published by Bowen-Merrill or Bobbs-Merrill? Same Merrill. Her niece Catharine Merrill Graydon was also a long-time professor at Butler, and her house in Irvington was recently featured here. The college moved to a new campus in Irvington in 1875, where it remained for more than 50 years before moving to its current location in the former Fairview park.
The original Northwest Christian building became the Indianapolis Orphan Asylum. The building was demolished in November 1910 to make way for “modern homes” that faced on a pedestrian street called University Court that ran down the middle of the block.
An Indiana National Guard Armory, an apartment building and several flats were also constructed on east side of the block.As you know, if you have seen the above historical marker, most* of those modern homes were themselves demolished for the “modern” interstate highway.The image below shows an animation of the site in 1898 (Sanborn map), 1956, 1972, and 2010 (aerials from Indygov). 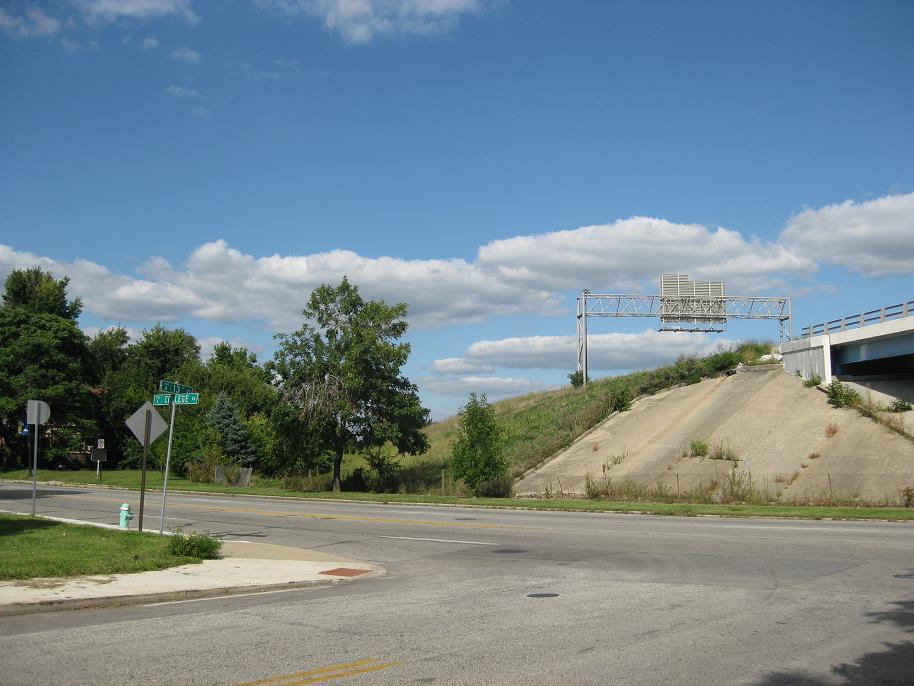 * Five of the modern homes still stand at the southeast corner of College and 14th. The fact that they faced the now-gone University Court is why visitors see the houses’ backsides from College.