The idea to build the nation’s first transcontinental highway from New York City to San Francisco was proposed one hundred years ago.  Hoosier entrepreneurs Carl G. Fisher and James A. Allison invited automobile and accessory manufacturers to Indianapolis to unveil their plan to build a coast-to-coast rock highway to be finished in time for 25,000 automobile tourists to make the trip overland in cars to the Panama-Pacific Exposition in 1915.

At the time, the automobile in America was well established, but good roads were not.  Motorists had about 2.5 million miles of road to drive.  Most travel was in urban areas, with travel into the country attempted in fair weather.  Rain quickly turned country roads into thigh-deep mud ruts, making travel extremely difficult.  Many travelers had to enlist the aid of a nearby horse team to extract them from the quagmire.

Fisher recognized the dilemma.  Building on his success as the founder of the Prest-O-Lite Company, maker of carbide headlight systems, and co-founder of theIndianapolis 500 in 1911, he envisioned an ambitious highway project.   He sought and found contributors motivated by the advantage of decent roads.  They rightly believed that, if roads were improved, people would travel more and demand for automobiles would increase. 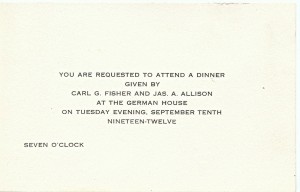 The announcement was made on September 10, 1912 at the Athenaeum.  Within 30 days, Fisher had $1 million in pledges and publicity nationwide.  A few months later, Fisher received a letter from Henry B. Joy, Packard Motor Company president, suggesting that the road be named for Abraham Lincoln.

On July 1, 1913, the Lincoln Highway Association was created and the route was designed to run through or touch 13 states.  TheLincoln Highway was designated with red-white-and-blue striped markers with a large blue “L” in the center.

InIndiana, the highway stretches from Fort Wayne to Dyer.  Changes to the highway came as early as 1925 when the federal highway numbering system was enacted.  Indiana replaced the route with highways U.S. 30, U.S. 33, U.S. 20 and S.R. 2.

Today, the name “Lincoln Highway” has been nearly wiped out, although some communities have chosen to mark this historical route as one of their city streets.  Advocates also have placed historical markers for the Lincoln Highwayand Ideal Section along U.S. 30 near Dyer.  Remnants of the original highway can be found in various sections across the country.