In the early 1900s, hundreds of eastern Europeans moved to a near westside neighborhood known as Haughville. The Zeunik family, with Slovenian roots, immigrated in the 1880s or 1890s and settled in Indianapolis by the early 1900s. Parents Joseph and Ursula (Radez) Zeunik appear in the 1910 census as natives of Austria-Slovenia and lived with their seven children in a house at 753 Haugh Street. The 40-year-old Joseph worked as a molder in a foundry (probably the nearby Haugh Foundry) and his wife managed their boarding house. Although the Sanborn Fire Insurance Company map shows the one-story house as barely large enough to fit a family of nine, the boarding house was also occupied by ten male boarders, mostly single men from Slovenia who also worked as molders in the foundry. Helping fellow immigrants was common for this era and cramped quarters was just part of the sacrifice made to get ahead in their new country. The family eventually added three more children.

During the 1920s, the Zeunik family operated a grocery known as Joe Zeunik Groceries and Meats at 777 Haugh Street, on the southeast corner of Haugh and W. St. Clair Streets. The one-story frame structure, located six houses north of their home, also housed the branch office of  undertaker A. J. Voight Company (see sign at the door on the left). Although the store was likely a family-operated business, son Joseph August Zeunik (1902-1977) is listed as the owner in Indianapolis city directories dating as early as 1921. By the early 1930s the family moved a few blocks northeast to adjacent houses at 1025 and 1029 N. Holmes Street and Joseph A. continued as a grocery store manager. Family members on ancestry.com have identified the people posing in front of the store as William “Bill” Zeunik (1910-1979), Joseph August Zeunik (1902-1977), an unidentified brother–possibly Alvin Albert Zeunik (1904-1972), and Mathilde “Tillie” Zeunik (1906-1994). Tillie was deaf and attended the Indiana School for the Deaf where she met her husband Edward A. Anderson.  By guessing the age of son Bill as about age 12, the photograph dates to circa 1922. 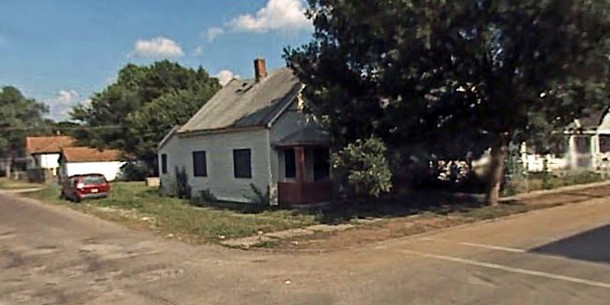 Sanborn maps show that the corner store was later modified, removing the angled corner doors and adding a front porch. This Google Street View image shows the house in July 2007.

Between 2007 and 2009  the house was razed. By the time the Google vehicle traveled through again in July 2011, the neighborhood had received new sidewalks and the empty lot was being used for construction equipment.